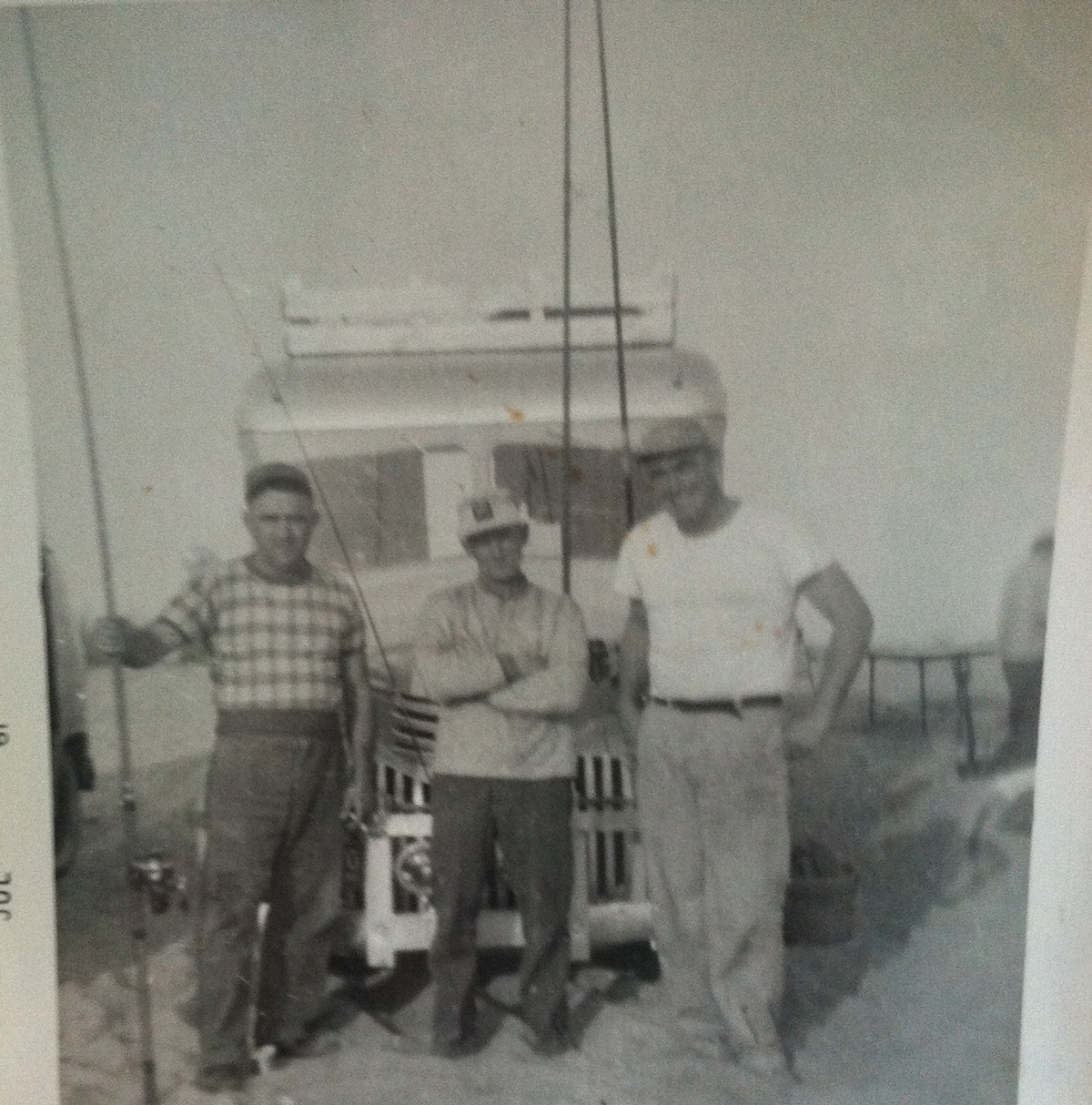 With so many fishing stories beginning with, “Remember when…” or, “what we used to be able to do was…”, it’s good to look back at what some die-hard fishermen did to get to the fish. In the Fifties and Sixties, access to the beach for fishing and relaxing was far easier compared to these modern times. Many fishermen who wanted to cast through long stretches of shoreline for bass would drive there and spend a few days hunting for bass and blues, living out of their vehicles. They needed to be resourceful, often designing and building beach buggies and campers in their driveways for days on the beach. They built bunks in the back of bread vans and amazingly spent weekends without cellphones. Families packed it all in converted anythings, dropped the tire pressure, and drove sand trails down places like East Beach and the Charlestown Breachway.  For kids it was a bathing suit, two t-shirts, and a hat; that’s how you packed for the weekend.

Trending
Captain Rene Letourneau is the 2020 Orvis Saltwater Guide of the Year, finally

With fewer people, houses and regulations, families could spend countless days playing and fishing the Charlestown beaches, building strong bonds, and good memories. Beach stories were of Power Wagons and Trail Dusters, kids sleeping on the beach and Jim McCusker’s Table Talk van. The McCusker family was nine people strong with a dad who lived to fish, which meant getting lots of kids and snacks onto the beaches where bass and blues cruised at night. Jim converted a bread delivery van into a beach cruiser for his big family and fishing equipment. He built a small kitchen with a gas stove and refrigerator. It had custom rod holders, coolers, and an outboard motor rack for the boat he lashed to the top. The sliding doors seemed to always be open, even with a child sitting on their mother’s lap riding co-pilot. Those were different days, back then. Jim’s son Bill was a winter baby so he had to wait six months for his first trip to the beach.  Bill laughed as he remembered that someone always stood up to keep the cabinet doors from swinging as they bumped their way up the beach.

The Table Talk van may have needed better latches, but to Jim’s great credit, there were no mega-parts stores or internet for overnight delivery. Most everything he needed to get his family to the beach he had to build himself, like an on-board power take-off for the air compressor to re-inflate the tires, after lowering them to ten pounds in the front and eight in the back for the trip up the trail. He even managed to run airplane tires to gain traction for the big boxy two-wheel-drive van.

In 1958, Jim became a charter member of the RI Beach Buggy Association and his official number 38 plate still hangs in the family garage in Green Hill. An unorganized organization at first perhaps, it was the genesis of what is now the RI Mobile Sportfishermen Club, growing from just whoever was there to a dedicated group with a mission to keep beaches open and accessible. There was a certain sense of comradery on the beach, which meshed well with the competitive spirit natural to successful fishermen. When someone got stuck on the trail, others stopped to help out because that was what you did. 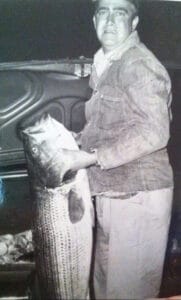 Plus, they were in the way.

For a while, there were no girls on the trips. Son Bob said, “No Mom, no sisters. We were there to fish.” Finally, on her first trip, their mom traveled through a wicked storm, unsure all the way of where she was. After that, they became family affairs with a charcoal grill and lots of books for Mom.

At sunset, dad’s left families sitting by campfires to hunt for the big fish for which we still search; only it seems their numbers were a bit better back then. When you are very young and your dad is very big, it is exciting to see stripers get landed and during the day, brothers had all they could do to drag heavy fish, like his personal best forty-seven pounder, from the water’s edge up to the safety of the dunes, when Jim and his friend Jimmy Martin were really catching. 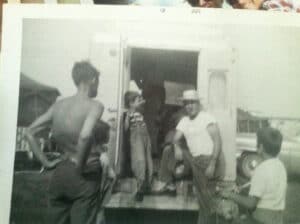 Later Jim converted a 1967 Dodge Power Ram into a family fishing machine by building his own pickup camper. Constructed of wood with aluminum siding, windows and lots of parts from a closing RV store, it was so perfectly built that people would stop him to find out what brand it was or where he bought it. Guys took a lot of pride in their vehicles.

Some regulars carried cards with their information on them to share with other fishermen. A South County business card. Jim would pass his, complete with his RIBBA number and radio tag, KMA 1124, so they could communicate later, usually via the CB radio. On the beach there were sometimes trucks lined right up, other times there was more solitude. There were casting contests, kids’ games played through the dunes, and people sleeping in their cars just to go fishing all night. 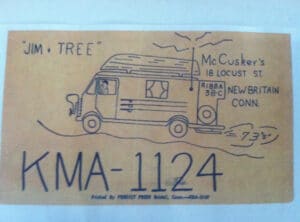 As more people traveled to the area, regulations began to restrict what was allowed and where vehicles could travel.  Bob remembered one Sunday in 1967 or 1968, when the family headed off to church. Because things really were different back then, they left a pile of gear on the beach to hold their spot. When they returned, they were met by the police who refused them access. Just like that, the beach was closed to vehicles. His brother Jimmy had to swim the channel to retrieve the gear they had left. One veteran surf caster thought it was the super quick Subaru Brat that precipitated the closing of places like Narragansett Beach, where fishermen could drive up to fish the river mouth. Today there is still some access for buggies and trucks in a few places, but only after you have purchased a permit and presented all your required equipment.

Later in life, Jim ran a charter boat out of Jerusalem, called the Mi-T-Mac III, fishing both inshore and off.  “Fishing was his religion”, Bill told me. Plus, he fell for the drug that is tuna fishing and basically fished until he could fish no more. The Power Wagon and bread van passed through the family for a while then were lost to time.

Jim McCusker passed away in 1997 at the age of sixty-eight after spending the morning gathering oysters.

His ashes were spread off the beaches he loved.

It ain’t like it used to be, we all know that, and it’s not going to be.

Despite the pains of regulation creep, expanding limitations, and fees for everything, we remain pretty fortunate.

And there’s hope someone will look back at our generation and our beaches and think, “Man, those were the days…”

Fishing, Faith and Being Muslim in a New World

A very recent anti-Muslim Facebook rant made the baseless case that Islam is out of line with American values largely due to their religious devotion yet ignored our great country’s foundation of religious tolerance. Isn’t that why we came here in the first place, back when cod were gathered by the baskets dipped from ship’s gunwales? It has become so easy to hate.

Some waters have warmed and some fishing has cooled. Stripers have started their expected travels from the upper reaches of Narragansett Bay towards Newport, South County and Block Island. There are still fluke in plenty of regular spots and the sea bass season has so...
Keep Reading

Writing a fishing column requires lots of time looking to the water but not out the window, lest you see how much fun everyone else is having catching actual fish. In spite of this and my editor’s looming deadline, four of us waded into the Salmon River last week, a...
Keep Reading

Recently, a local fisherman was jigging Gulp teasers with green jigs around the Jamestown Verrazano Bridge in fairly shallow waters. Carrying neither a camera nor a working scale, he reportedly landed an approximately fifteen pound, 33 5/8” summer flounder. An old...
Keep Reading