There is a lot happening in preparation for spring and her greatest day: the opening of trout season. 6 am on the second Saturday in April marks the beginning of everything we have waited for this winter, while we shoveled, watched the plow truck drive by and then shoveled some more. It’s a circus, it’s a zoo, it’s a nightmare to park and a challenge to find any quiet spot. It’s the day you remembered all the gear you never fixed, the day your young son breaks what you did and the day you get to break out the spring line of camo shirts and hats. Opening day is a green flag for excuse making, tackle buying, road trip planning and getting back to holding down the pickup truck with your fishing buddies after a long day sitting in a canoe. To keep our waters, stocks and access clear safe and healthy, our government is working on several fishing and boating minded projects all around us.

In Wakefield, the Post Road fish ladder project has been buried, literally, for weeks in snow and ice and also buried their chances of completing work by the contractual end, which was March 1. Work was timed to finish before the alewives and bluebacks made their way back home via the Saugatucket, but then it started snowing. In a fine move of cooperation and understanding that projects like fish ladders, which we create to circumvent what Mother Nature created in the first place, are subject to the whims of the seasons, the powers that be agreed this was an exceptional year and the work could continue after the deadline. Considering the number of agencies involved with projects like this from the Town of South Kingstown all the way up to the National Oceanic and Atmospheric Administration and the absolute specificity of government contracts, it is no small feat to alter a legal document These documents are the stuff of lawyer’s dreams, where each and every possible possibility is laid out in very specific elaborate detail so that there is nothing more clear than the confusion you get from reading one. 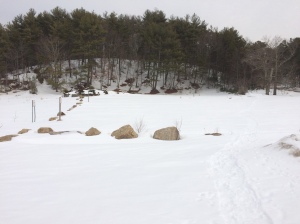 The curvaceous walls of the new ladder have been formed and the re-rod is installed, waiting for daytime temperatures above 28 so the concrete can be poured.  The project will come together pretty quickly after that as we imagine all sides have had enough. A tip of the camo hat to the players who agreed that the contractor, Narragansett Dock Works, has a proven track record of keeping to schedules and that they really just got walloped this winter.

Over in Exeter, RIDEM is soliciting bids to install a new boat ramp and improve the access area on Beach Pond. Shared with the State of Connecticut, this is a very popular fishing swimming and boating spot. For the fishermen, Beach Pond holds the usual northeast species but also smallmouth bass and, a rarity in these parts, walleye. Smallmouth is a whole different fishery, much like the Connecticut-stocked walleye and they are often best landed with soft baits, crawfish imitations in a variety of colors and sometimes even small spinners. Anyone who has ever ventured north for walleye no doubt knows they require a light rod and an equally sensitive touch to feel the bite so it’s a treat to have an opportunity to catch them locally. Our licenses are also valid on both sides of the state line.

Since RIDEM stocks trout there, the pond is closed to fishing for a few weeks, leaving its rough-plowed parking lot the only place to hang out, steam up the windows enough to duck down and sip PBR’s and throw cigarette butts out the window. This improvement project will create parking spaces for cars and trucks with trailers with enough dedicated space to stage and maneuver your trailer into the pond. Access will be through a new concrete slab ramp with a floating dock alongside. Where once we just bulldozed our way to the shore, projects such as this incorporate long-term erosion controls, handicap access, minimum overall disturbances and finishing touches like appropriate native vegetation.

On the Wood River in Hopkinton, a new walking platform has been proposed to minimize our boots crushing everything underfoot as we walk to fish off Arcadia Road, just up from Bitgood Road. This 90 day project will create minimal disturbances to the grounds while building a raised wood and composite decked walkway to access the river. Wooden steps are also proposed to access the walkway, complemented with plantings of dogwoods, swamp rose and asters, and several varieties of ferns, like cinnamon and hay-scented.

These projects, along with several in the works, will help keep our shorelines clean and minimize impacts of our big footprints. The beauty is also that after a few natural weather cycles, improvements blend in nicely with the surroundings and passively help us protect the grounds. Beach Pond will look like a different place, hopefully with some big trash cans, when the project is complete.  One stretch of the Wood River will have far less trampled flora and if the weather holds, buckies will get to take a new path upstream, building an abundance our ecosystem very much needs.