A RISAA symposium, scientists and how recreational fishermen are part of the equation

Reprinted from the Narragansett Times, Wednesday, April 1st. no, it’s not a joke…

The Rhode Island Salt Water Anglers Association held their 2nd Southern New England Recreational Fishing Symposium with a goal to bring together scientists, environmentalists, regulatory agencies and recreational fishermen from several states to help identify needs and ways to encourage “An Abundant Future of Recreational Fisheries”. Co-sponsored by the Coastal Institute at the University of Rhode Island and the Pew Charitable Trusts, the meeting worked to address most specifically the recreational fisherman but the ideas suggestions and concerns raised affect all user groups of our local waters.

In her opening remarks, RI Department of Environmental Management Director Janet Coit referenced the magnificence of our state fish, the need to “celebrate the world class fisheries we have” and how her agency wants, “to ensure our children and grandchildren will be fishing in the future”.  She also mentioned her recent difficult decision to reduce the daily bag limit for striped bass to one per day in light of declining stock data. 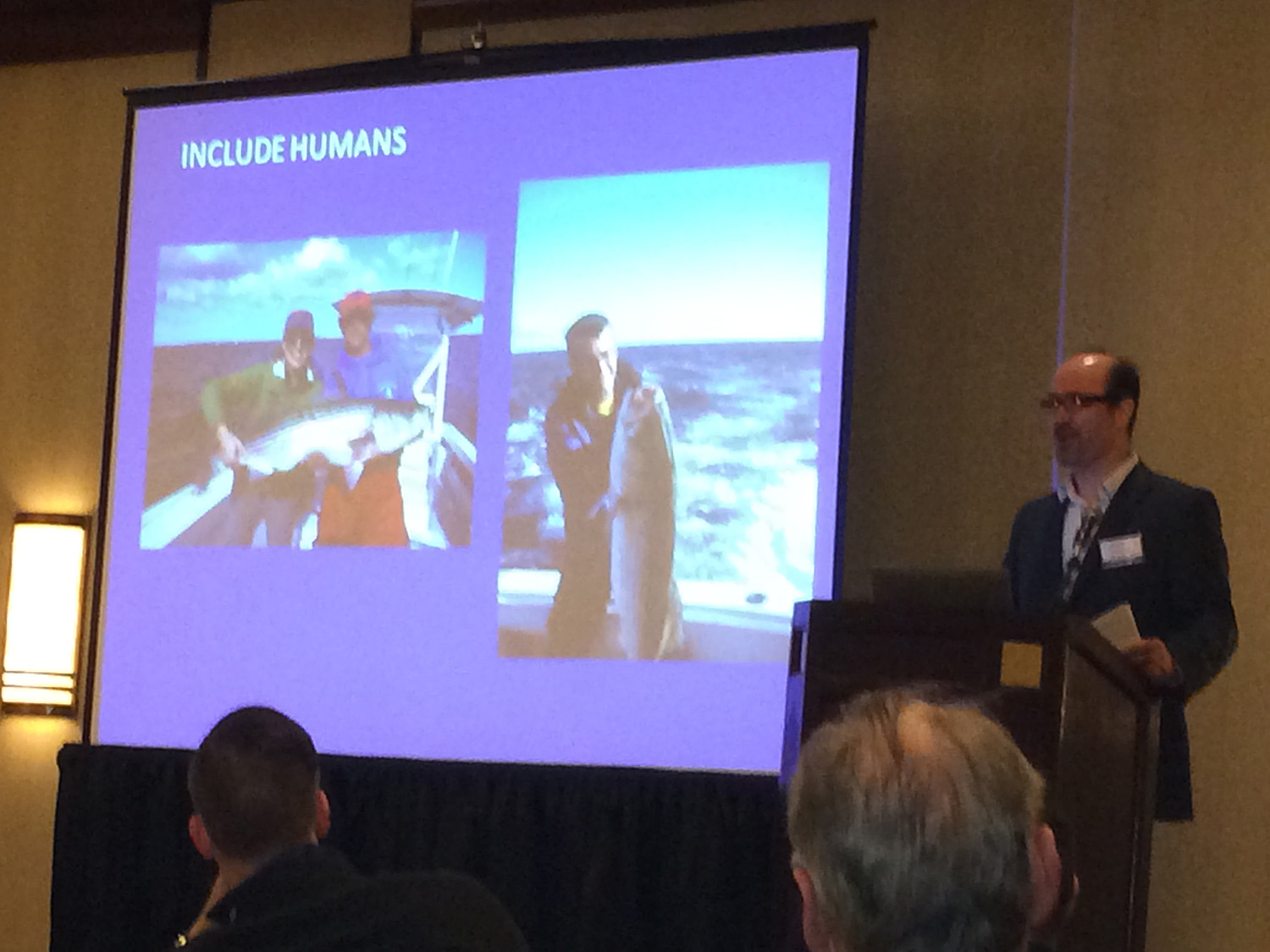 The Environmental Defense Fund’s Matthew Mullen discussed his new Chesapeake Catch cell phone application, which allows anglers to log catches and specific parameters in real time. Because he saw a need for “a better fishing experience” and more accurate data collection, an issue he referred to as “trash in equals trash out”, he worked with the iAngler app, created in part by the following speaker, Brett Fitzgerald.  Executive Director of Florida’s Snook and Gamefish Foundation, Brett’s idea is for fishermen to be part of the rule making process by uploading landings, discards and measurements while they are still on the water, adding, “you can’t see someone else’s secret spot.” By providing real information to fisheries managers and scientists for their modeling, Brett said, “It’s a whole new sandbox for fisheries researchers to play in”. 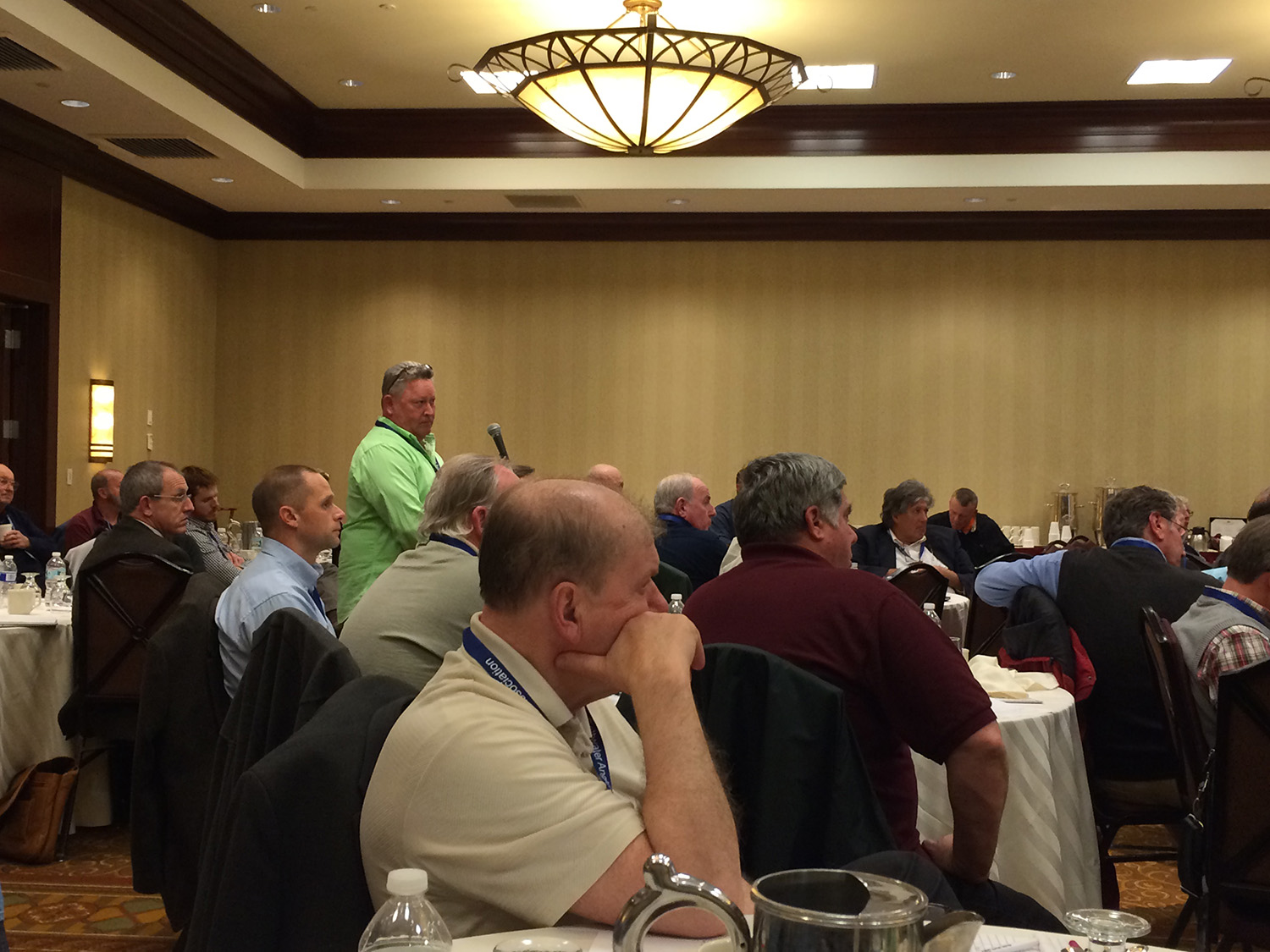 The payoff from giving up this information is not only having input into the data stream for regulation development, which some believe is consistently flawed by design, but also that all information is saved in a personal space, so the next time the user goes fishing, they can review it any time. Tides, weather, state regulations and a photo bank are also part of the application.

Several speakers detailed the importance of a new approach to policy development called Ecosystem Based Fisheries Management, or EBFM.

Greg Wells, speaking for the Pew Charitable Trusts’ U.S. Oceans Environmental Group, noted this new plan is “focused on the system not just a single species”, hoping to develop a more comprehensive and accurate assessment of interdependent populations. The concept is much like developing an environmental impact statement before crafting policy for a particular fish stock and harvest allowance. With experience as an on-board observer in Alaska and with the Pacific coast swordfish fleet, he also pointed out that nearly 1 in 5 fish caught commercially in US waters in 2011 were harvested unintentionally.

EBFM means accessing the health and interaction of many species affecting the fish of focus to better understand how a regulation or limitation may cause an unintended domino effect on other members of the ecosystem. This can be as specific as including planktonic nitrogen levels or as widespread as the deleterious effect of seals or cormorants on juvenile fish populations. With warming waters, seals may stay longer along the coastline, consuming more forage fishes like herring or commercially important species like flounder and cod. Those facts need to be incorporated into rule making.

The baseline for fisheries management is data; data collected by at-sea observers, government ocean surveys, commercial landing reports and from personal interviewers. The last option has been very difficult as it relied on home phone interviews and fell victim to caller id. Biologist David Martins with the Mass. Department of Environmental Protection detailed how the new Marine Recreational Information Program works with a 24 hour clock in 6 hour shifts, personally interviewing fishermen on the docks. Because interviewers have no enforcement powers, questions tend to be answered more honestly, which provides more accurate data.

Also discussed in great detail was the crucial importance of forage fishes, like river and sea herring, menhaden, sardines and anchovies. Because they filter water when feeding on herbaceous and carnivorous plankton, they transfer protein to larger predators, serving as the basis of our local food web. When their stocks decline, so do the stocks of those who prey on them. Their significance was repeated several times through the presentations and in break-out groups along with how climate change is raising water temperatures, pushing southern fish like cobia and sailfish farther north, subsequently creating state allocations issues for species like back sea bass and scup. Scientists are also scrambling to prevent unmanaged expansion of data poor fisheries, like the blue line tilefish.

Russell Dunn, National Policy Advisor for Recreational Fisheries at NOAA, discussed the new National Saltwater Recreational Fisheries Policy while imploring fishermen to be part of the process, reminding them that state regional and national councils are meant to be reflective of the fishing population and if people cannot serve directly, they should at minimum, contact their representatives to be heard.  He added, “The government really is answering your call”. According to the Fisheries Economics of the United States, recreational fishing in Rhode Island supports approximately two thousand jobs while contributing more than $219 million per year to the economy. On a national level, the sport has a recreational impact of approximately $58 billion.

Afternoon break-out sessions attempted to identify drivers of change in southern New England waters, what can be done to increase our abundance of fish and how we can better advocate our needs and ideas to policy and regulation makers.  Woven through much of these discussions were themes of protecting forage fishes, creating spawning sanctuaries in Narragansett Bay for species like tautog and winter flounder and a real need to educate young and old about the concepts of better ocean stewardship, the effects of climate change and how to get more people involved the processes which affect our Ocean State and it’s fish.reprint