for some unknown indescribable confluence of causes, this important story, which originally ran back in August, never made it to this website, has been erased from all my backups, save one, and is without an entire roll of pictures.

nonetheless, it was a look at a tight group of men who work each day to maybe save our lives. they are worthy of our greatest admiration, i would say…

How much gear do you bring down to the rocks to go fishing? How well do you know the rocks or the paths leading to them? How close is a PFD in your boat? Do you bring one when you fish places like Beavertail, Black Point or Fort Wetherill? Do you think you can tread water in waders and do you have a knife taped to your suspenders? Can you swim at all? What are the costs to attempt a rescue if you fall from those rocks or slip overboard or your vessel fills up and goes down? The volunteers of Jamestown’s Fire Department Marine 1 know and it is not just about the money.

In many Rhode Island spots, it’s a long fetch of ocean leading to a ragged shore, where salt and foam mix, where granite and black rocks become greasy green, impossible to see after twilight. This is a precipice that deeply-missed island artist Tom McAleer painted countless times, with fishermen casting and trying and leaning and pushing their luck. Often it is precisely that risk, that urge to take just one small step closer to heaves of oxygen-rich waves where fish hunt which can quickly turn to tragedy when an angler is careless and that sea comes calling and without warning a free afternoon becomes a man in the water call and that man often wears high boots or waders, neither of which will help in their rescue. 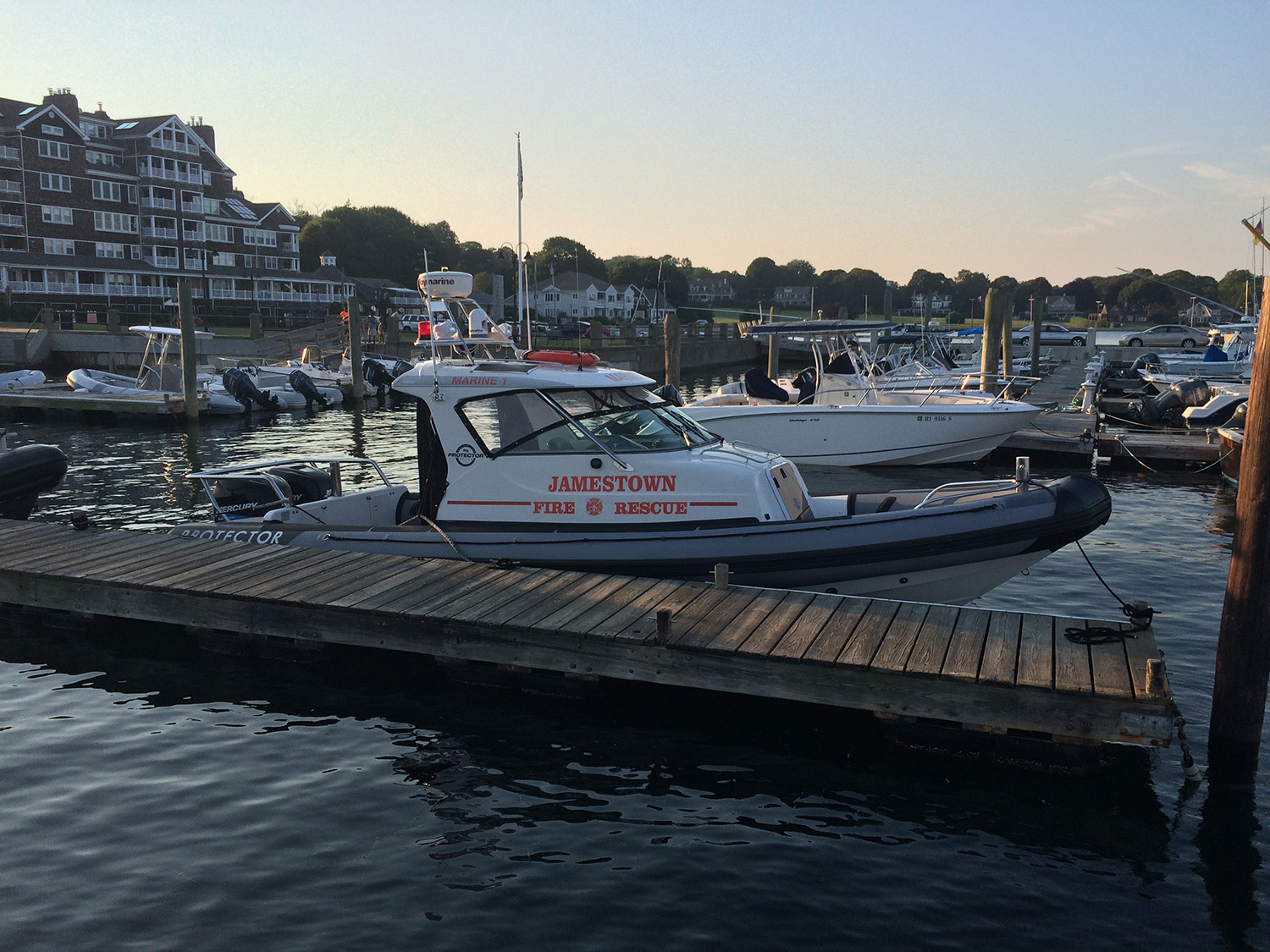 The crew of Engine Company 3’s Marine 1 is Captain Brian Bryer, Lieutenant Steve Froberg, Captain Ron Barber, Deputy Chief Steven Tiexera and 43 year veteran firefighter Lew Kitts; all are volunteers who leave their jobs and race to the dock because they are dedicated; their only concern is how quickly and safely they can get you in their boat. Steven’s father is a retired Chief, known to our readers as Joe Tex and even at 81, he often shows up when the boat gets dispatched, because that’s what firemen do. “Oh yeah, he’ll go!” Steven laughed.

The twenty-nine foot New Zealand made Protector has a one inch solid fiberglass hull, making it strong enough to be operated near rocks and shallow bottom. As she draws only 18 inches, the twin Mercury 225’s can be trimmed up enough to allow for a beach rescue where victims can be brought over the bow and placed on a backboard for transport. The Harbormaster has a boat better suited for a beach situation but that’s the point, these guys are prepared for any situation. “The nice thing is a patient fits right here, perfectly”, the Lieutenant told me as he pointed to the bow, “right on the backboard and you can walk the patient right through”.

They can draw sea water through a strainer to assist with fire suppression but their primary duty is to rescue us: “we are just worried about life safety”, said Lieutenant Froberg, who mans the port side electronics. Marine 1 has been in service for twelve years and is now equipped with a digital dome radar system, allowing them to see objects on land and sea with far more accuracy in all levels of light than the human eye. In the dark of night or in a heaving sea, heat imaging can be used to locate victims and facilitate their rescue. An island resident donated half the cost and donations were collected for the balance. Because it can be nearly impossible to hear with a fire pump deployed or a helicopter overhead and sirens all around, she is now equipped with a state of the art David Clark headset communication system, also a donation, enabling secure verbal contact in high-noise situations, much like when Narragansett called to assist in a recent search for a young swimmer. Firefighting and life-saving is a game of half seconds; Jamestown islanders understand the importance, especially when you consider there is no municipal water service north of the windmill and mutual aid first has to race over the bridge.

Marine 1 is fast and capable, rugged and smooth at 48 mph, which is critical when they are called to assist neighbors like Narragansett South Kingstown and Newport. The Lieutenant told me “we have been on a couple of calls in this where we headed out, got around the corner where it was pretty rough and we were looking for the Coast Guard and they said, ‘yah, just call us if you need a hand.” There was concern at one point that a boat might be needed on both sides of the island but she can circumnavigate Jamestown in just 22 minutes, putting them about ten minutes from the west shore, where most calls originate. Beavertail typically is the busiest location for recreational fishermen and divers. Lieutenant Froberg built in a system of navigational waypoints, reducing any loss of time due to darkness or foul seas. So impressive.

“We get a lot of calls on divers, over at Fort Wetherill, they call it Divers Cove, where they do a lot of training”, Lew explained. The week prior there was a fatality near there; a 41 year old, experienced diver on a training dive. “We get a lot of calls for guys that go down and stay down too long and people waiting for them get a little nervous”, he added. Lew made the arrangements for this trip, he is the guy who knows every guy, who can find anything anytime and says, “sure, I can do that” to just about any request. After the tragedy of 9-11, he was angry his station had no dress blues to assemble and show their respect. Dress blues are uniforms firemen wear proudly for parades, formal events and for quiet funeral services to honor members passed. No taxpayer money was requested, he just started fundraising and in short order he helped raise twenty thousand dollars. Now on proper occasions, the 130 members of the Jamestown Fire Department stand in smart double breasted blue uniforms, demonstrating the same pride they take in their assembly as they do in saving our lives.

When we talked real rescue costs, quick calculations were of fuel. Because they are volunteers first, they didn’t figure themselves into the equation until prodded. There is time away from work and family and anything else to factor. The Lieutenant conceded, “The thing of it is, the call goes through Metro Control, so you have all these other towns on the way, you probably have 6 boats it the water. You don’t know if it’s a guy who fell in a foot of water and got right back out or if it’s a family of five, so everybody is going to come.” Lew said, “We get a lot of overturned dingy calls. When you got a guy on the rocks, you get a bunch of people scrambling to the rocks, you get 4 or five people who show up in boats. I guess when you think about it, it’s not just the boat cost, it’s the cost of the whole operation. The rescue is coming out, the fire truck is coming out, there’s lots of people coming out.” All volunteers, all totally focused on saving us.

They train once a week, volunteering even more of their time to stay in perfect shape, to be more efficient, shaving even more precious half seconds from their response time. On average, this crew can drop everything anywhere on the island and be off the dock in 5-8 minutes, even “a little quicker during the day”, added Steve. Most of their calls are for BLS or Basic Life Support so the mission is to pull you from the water or your vessel, then transport you as fast as possible. On land, the station responds to an average of 200-250 calls per year with Marine 1 being called in around 30 times. This year already they have already responded

more than 20 times. It’s important here to note now how they always refer to victims and patients; never was there talk of anything other than someone to be rescued. When I asked about the radar system detecting a body in the water, Lou was quick to correct that it was a victim, not a body. Present tense. They are absolutely focused on lives.

State-wide, there are dozens of departments staffed with dedicated volunteers who will drop everything to save us. We all know you can’t regulate common sense but when we fish from beaches or cliffs, it will serve us well to know there are costs to correct our carelessness and be there for our accidents. For the young, blessed with their fleeting natural sense of abandon and us older types, cemented in our ways, perhaps a pre-departure moment is due for a safety check, for a second thought. We are, in the end, creatures of habit, we should be thankful there is a team ready to jump up from their tables to fight the odds on Marine 1.

RISAA Needs Your Help, Potter Pond Gets Some

mackerel, anchovies, largemouth and sharks. pretty much covers it…

Stripers big and small have been patrolling Narragansett Town Beach at night. Just about just after sunset, when the second shift of beach-goers file in, singles couples and families have been taking over the shoreline. It’s pretty cool to see Dad’s and Mom’s with...
Keep Reading

The Rhode Island Department of Environmental Management (DEM) has announced that Lake Tiogue in Coventry will be stocked for Opening Day of trout season as a result of improved water levels in the lake. Bring on the rain! Dexter Pond in Scituate will be stocked and...
Keep Reading