Sure, it’s officially winter now that we have snow drifts, salted roads and finally a chance to break out the power augers before opening day gets here. To keep the chill off and the focus back on fishing, the Narragansett Surfcasters meet regularly to listen to speakers, chat about lures and fish that somehow get bigger with each passing month and generally just catch up. During the long days of summer a few members hold court at Monahan’s Pier where, after a while, a few peel off to fish while some stay in a holding pattern with the important role of keeping the stories rolling. Fishing really is half storytelling. Last week First Vice President Cliff Richer was kind enough to let me sit in and listen to guest speaker and South County ex-pat Steven Yang.

Sitting with 3rd year member Bob Baker, who quickly became my club guide, pointing out the who’s who in the room, he told me, “The board takes giving back to the community very seriously”. Sure, it’s a fishing club first but they have a strong and generous vein of philanthropy.  Listening in to who said what and given that, yes, it was a frigid Tuesday night in January when there’s no fish on the beach and just enough ice on the ponds to be completely useless, the room just felt fishy. Jeremy Holloway sat down next to us only to be quickly hailed as a local fish whisperer. Seems another member won a lure this past summer, then handed it to Jeremy with the fateful words, “I hope you catch the biggest fish of your life”. Funny how that works, sometimes. So Jeremy went to a very local spot with his knowledge of tides and the moon to land a forty-nine pound bass. That was quite a plug.

Back at the projector, Steven took an analytical, even mathematical approach to surfcasting and all its variables. His “Ten Commandments of Surfcasting” focused on consistency and reasoning. It was too easy for him to reflect on a season of fishing with a generalized “pretty good” or “ahh, the fish never really came around”; Steven turned that malaise on its head, looked for anomalies and consistencies, then applied principles of logic. And tides. And current speeds. What he found were identifiable moments where if he paid close attention to the details of nature and the intuitions of stripers, he could greatly increase his chance of catching fish. A point he made a few times was that he no longer focuses on catching big fish, which for some of us was never an option anyways, but more on the art of just catching.

Steven showed a brief video of Crazy Albert Knie, just enough to open the door to his slack tide theory, of which Steven is an admitted disciple. Knie believes that bg bass take advantage of slack tides, short periods of calm water where bait fish anticipate a change in direction and exposure to predators. This, Knie and Yang believe, is an excellent time to present a bait for those big bass which we recognize as opportunistic feeders. There was much to be learned from Mr. Yang and on a frigid winter’s night, a room full of restless fishermen checked their raffle tickets, told that story again and maybe left with a new plug or two but everyone left with lots more information gleaned from Steven’s years in the surf. 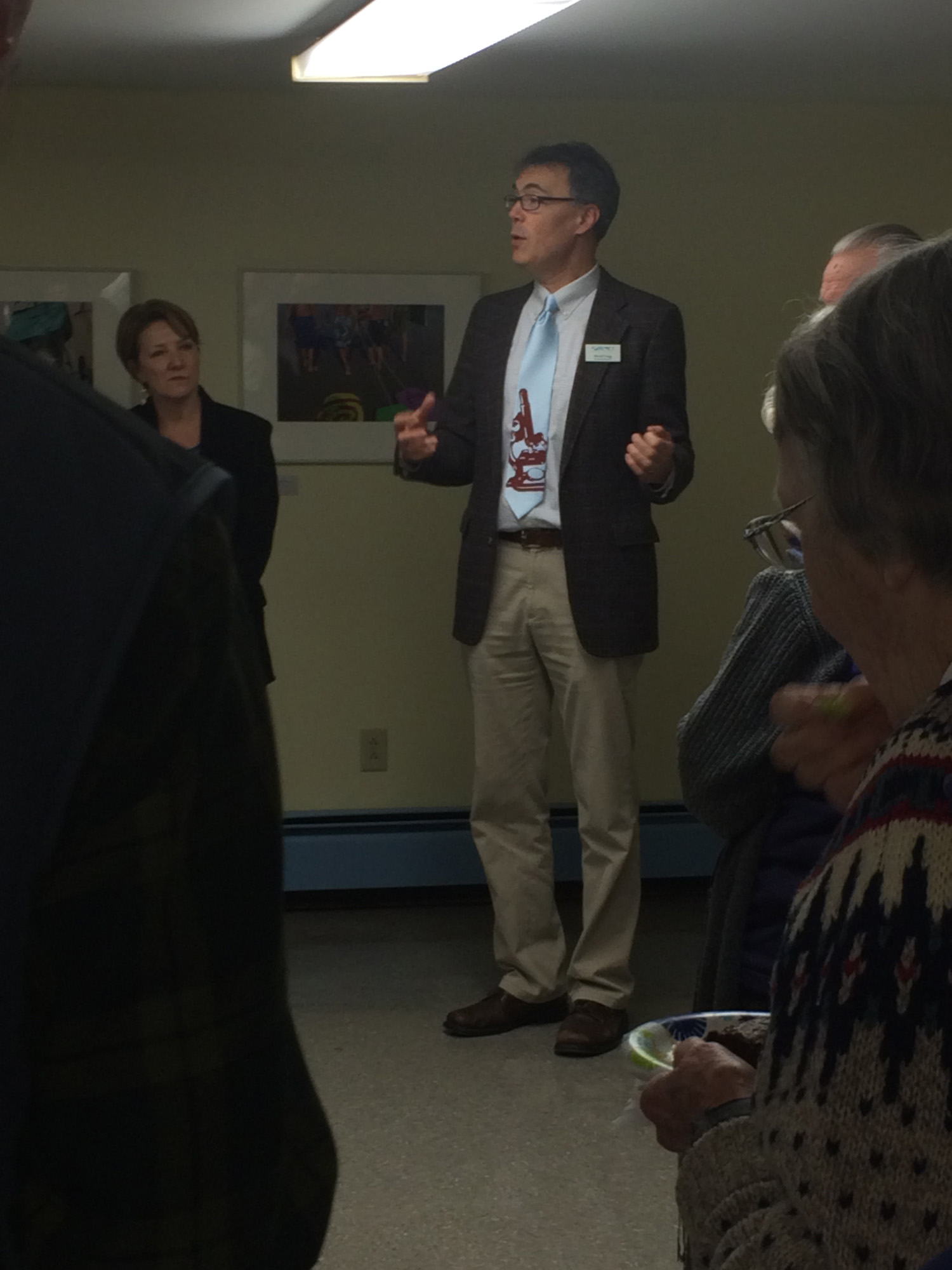 The Rhode Island Natural History Survey has moved into some big new digs at URI’s East Farm. For those not familiar, their mission is “to gather and disseminate information on Rhode Island’s animals and plants, geology, and ecosystems, to support the use of scientific information in the management of natural resources, and to facilitate the work of the people, agencies, and organizations interested in the ecology of Rhode Island.” What that means to us fishermen and hunters is that their work, through such events as their annual BioBlitz and a library of written resources, provides a bank of information on all that surrounds us. Those of us who spend time in the great outdoors know full well that not only is our environment changing for a host of reasons but that it’s critical for the eyes of science to collect and catalog. Executive Board President and Block Islander Kim Gaffett, Executive Director David Gregg and the most amazing Program Administrator, Kira Stillwell, proudly walked us through their office spaces, meeting room, walls of paintings and a case of burrowing beetles, seal skulls and whelk egg cases. Each piece was loaned by a board member as a way of highlighting the splendid diversity of our state. Their patient work weaves a line through all that we see in the outdoors and is well worth a view at www.rinhs.org.

For those who love fly fishing, steelhead, mountains and rivers teeming with gravel bottom, rocks and big beautiful trout swiped by God with azure, purples and soft pinks, the Conservation Media group has made a dynamite short film on all of those, set in some rich rough back country. Patagonia and Orvis had a hand in bankrolling the project, which has a fantastic 4 minute trailer offering just enough scenery and bent nine weights to get you hooked. Need a minute to see how your ten and two could use some help, check out Kate Taylor throw a 9 weight like an arrow into a pool you just know has a trophy waiting to feed. The main motivation is to remind the guys stuffed into Brooks Brother suits handling a third martini instead of a DeLorme or a topo of the hills around the South Platte to get busy addressing climate change, ocean acidification, spawning fish and the state of the trout. You can see the movie trailer at http://coldwaters.org/.

By the way, the plug was a wooden Wally’s Darter.

some thoughts on politican & eels-narragansett times, 7/4/2014

Our Governor Chafe, that’s with one F, was in town Friday last, declaring squid to be our official dinner starter and to cut the cheesy blue ribbon at the new Galilee boat ramp. For starters, plenty are the questions and insufficient is the page space, to...
Keep Reading