When you ask a person for an interview, even for just a few questions, the response typically is a pretty standard “sure” or “no thanks”. Lots of people enjoy getting their words or picture in the paper, though you do get the occasional, “Why don’t you mind your own business”. Last week, after approaching an older commercial fisherman, who for decades has plied our local waters from a worn but sturdy wooden skiff, the interview question was received with a “no way” then an “ok” but then a “I’m not doin’ it” followed by a quick “I will speak with you but…”, all that dressed in ground rule caveats plus a stipulation of anonymity. 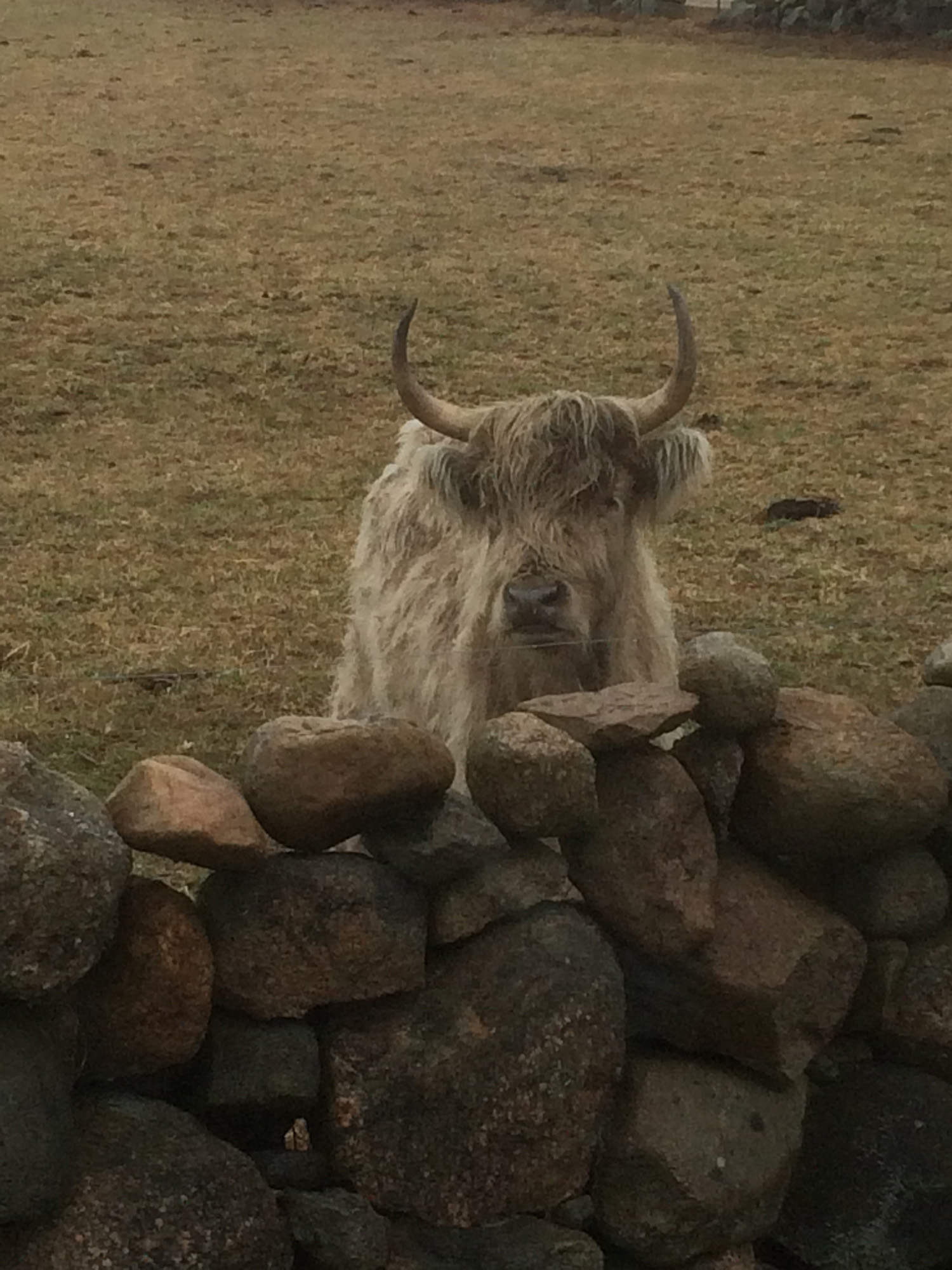 this picture really has nothing to do with the column, i just love the picture. Matunuck Beach RI

Interesting concept, but a solid sporting interview typically involves using a person’s name. His quick demands and ruffled feathers maybe came from so many experiences of troubles on the bay or previous reporters spinning his yarn or an inherent distrust common to the fish business. Maybe he was just a cranky guy with a crooked back working a heavy rake on a salt pond plastered with moorings and long denuded of a decent weekly wage. He didn’t budge, I lost interest. Either way, it would have been a great few minutes leaning on his gunwales in the sun, watching a tide wash away, hearing his side of any story but for now, that is the story.

Sweden apparently is having trouble with a few Maine lobsters being captured alive on their western coast and is now petitioning the European Union for a “total and complete shutdown” of the arachnid, or something close to that.  More than thirty Homarus americanus have managed to escape over the last eight years, only to be recaptured, all wearing their state sponsored colors of rubber claw bands. Sweden sees this as serious border trouble and fearing they might mingle with or worse, intermingle with their own Homarus gammarus, wants them classified as an “invasive species”. Maine exports $134 million worth of lobsters to the EU each year and given the demand Swedes have for lobsters, lots of people wearing suits are calling for restraint before an embargo is enforced.

Minister of Seafood, Tonald Drump, has promised to build an undersea wall to ensure no foreign lobsters will enter the country. At press time, there was no word on whether the State of Maine would have to pay for the wall although Minister Drump did say that, “I will build a great wall—and nobody builds walls better than me, believe me”, or something like that.

The Green Hill “Fluke Till Ya Puke” Fishing Tournament have decided to include a kayak division for this year, with full privileges for tournament payouts and calcuttas.  They also will be offering barrels of cash for the kayakers so the more who enter the greater the take. This is a big event in a little Snug Harbor; last year they paid out over $30,000 in prize money. This year there will be a $5,000 payout for the biggest fluke plus the boat with the most landed weight wins a Yamaha 6hp outboard and a 9’ inflatable. The calcutta, an old betting tradition dating back to British soldiers milling about India sipping Bow Brewery’s IPA’s, has several brackets and lots of potential. This year’s contest and bar-b-q will be held on Saturday, June 18.

Spring turkey hunting opens on April 28 and Rhode Island’s own Wayne Barber, host of WNRI’s Outdoor Scene, has started a new Facebook group of hunters to share stories and pictures. The page supports a reactivated Rhode Island Chapter of the National Wild Turkey Federation, now and forever known as the Swamp Yankee Gobblers. Wayne noticed the state chapter was defunct so he assembled a new board of directors and is ready to create by-laws, plan meetings, banquets and all important fundraising for scholarships. If you have an interest in turkey hunting or sporting clubs, Wayne is a wealth of information. The Outdoor Scene itself is something rare around these parts: a radio show that’s not pre-programmed to force feed you, it’s an hour of information about fishing, hunting and relevant government and club machinations. He interviews people from all over New England and lots more call or text into the Sunday morning show. Good stuff right there. 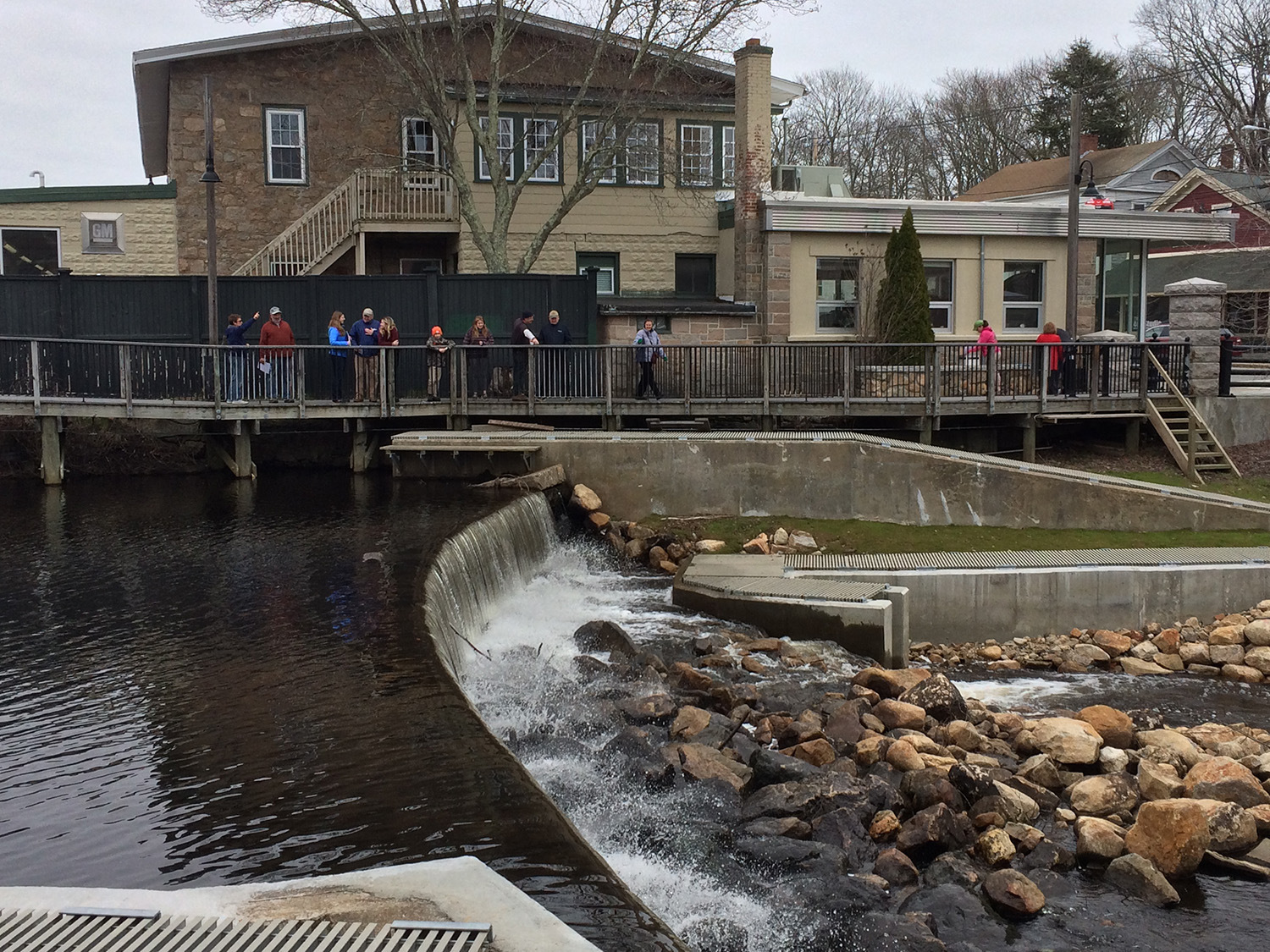 More than twenty people lined the Saugatucket River Saturday looking for signs of fish and waivers to sign. Once the legalease was completed, it took just a few minutes to learn the basics of counting and recording migrating fish and to understand just how important a simple ten minute reading is for biologists. 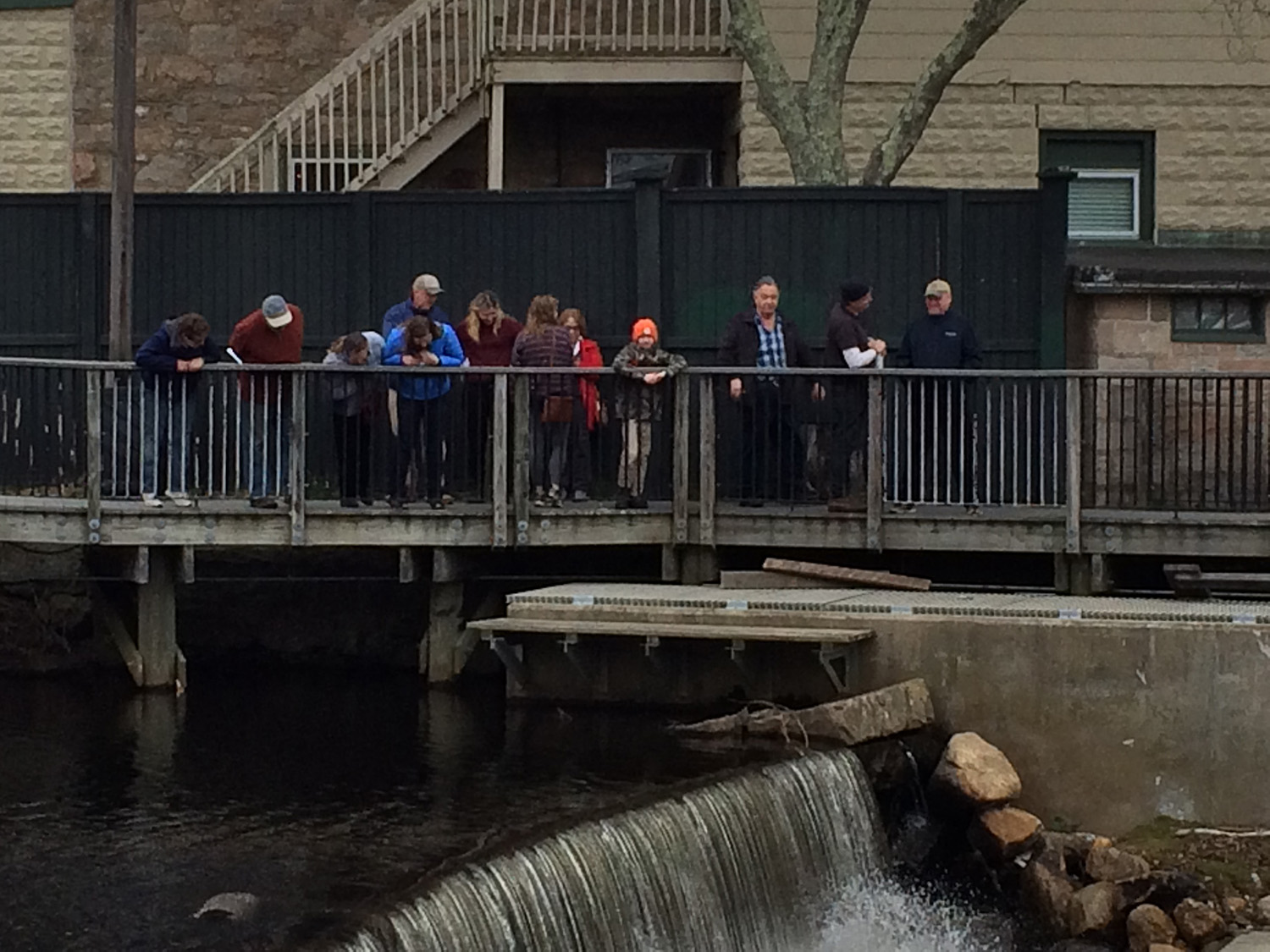 waiting to count the buckies

The new fishway seems to be operating as planned; no buckeyes were seen milling around in other areas around the ladders entrance and plenty of herring did summit.  Unfortunately, a raft of marauding cormorants were diving and patrolling the lower reach of the winter, looking to steal away any slow moving fish.

No real reports have surfaced yet about migrating stripers but certainly there are some starting to leave deeper pieces of the salt ponds and pass through the breach ways. Although waters are warmer these weeks than traditionally, the best practice is still low and slow. White bucktails, Yo Zuri Minnows in blues and yellows plus Storm swim shads are all winners this time of Spring. Most keep an eye to the Chesapeake migration but swampers will tell you plenty of bass stay right here all  winter. A few years back a local guy took a twenty-three pound bass from the upper Narrow River on November 28 right after landing a fine ten pounder. Tucked away in closets and gun safes, there exists several log books from commercial guys who used to seine the river and upper pond through the winters with great success.  While their catches of white perch herring and big stripers are now just stories, usually beginning with, “I know I’ve told you this a hundred times, but…”, they are solid proof of a healthy winter stock separate from those snow birds who swim south. Now with an eye on the tides and clean 2016 log books of our own, we can all get back to the business of fishing.