“Striped bass fishing could be on fire as they can handle the rough water well. Anglers need to be cautious, wear Korkers but still be mindful of waves and slippery rocks”. That’s a prediction and recommendation from Ocean State Tackle’s Dave Henault, who knows his fish. “Hazard Rock, Bass Rock and Beavertail are all dangerous and can be deadly places to fish”. With the passing of the post-cyclone come tropical storm Hermine, waters were churned up from high seas and rough surf. Surf fishermen know stripers seek out those oxygen-rich shorelines to corner bait at night but when things get so upside down, things can also go sideways quickly. 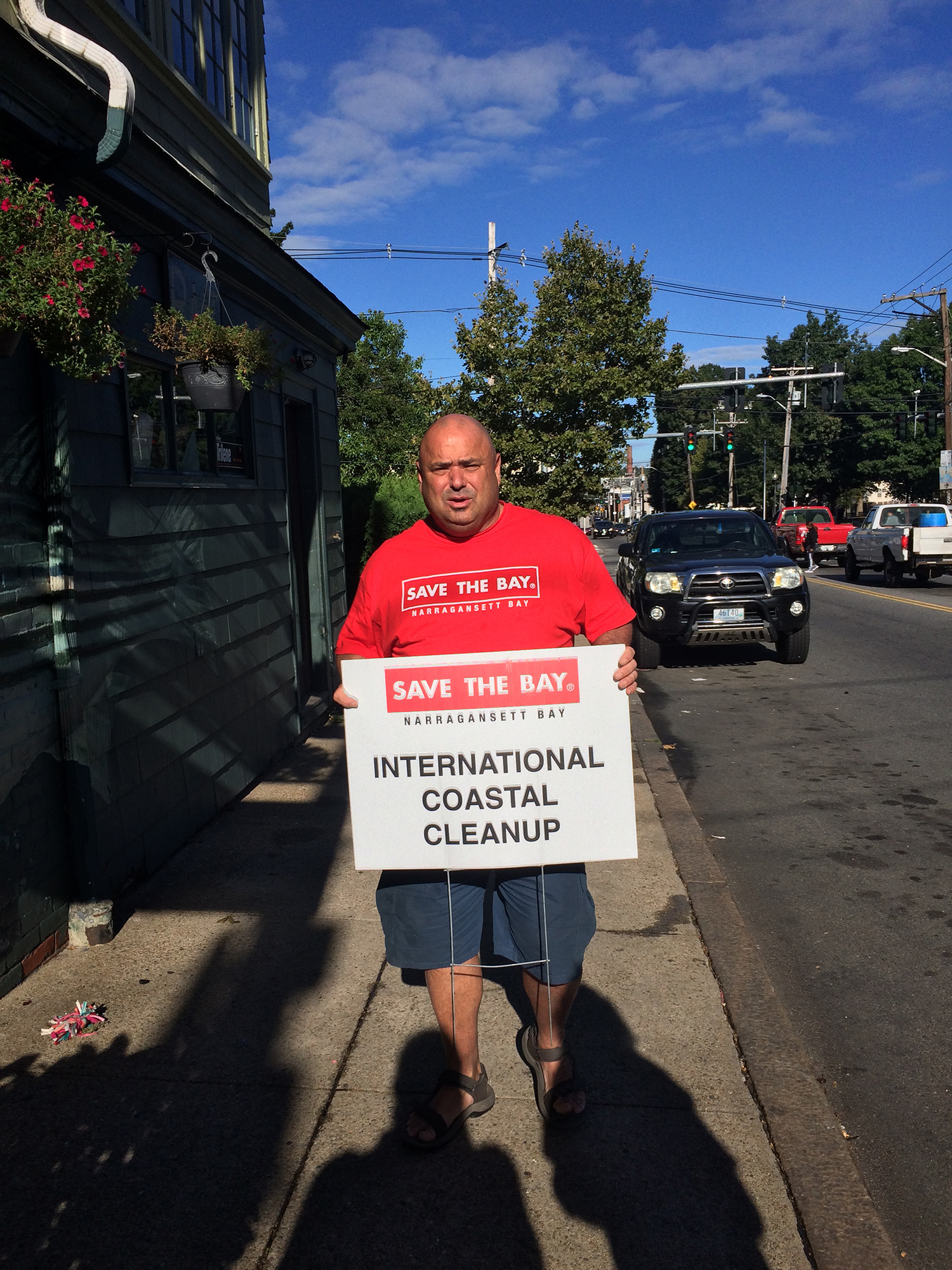 all want to get back on the water as soon as possible but it might take a few days for things to calm and be productive again. “The tautog bite will take a few days to recover, tautog don’t like turbidity” he added.

On the positive side of the storm, Dave thinks the winds may push fish and bait up into Narragansett Bay along with some warm waters. There’s always a positive side with Dave. Spots like the rocks south of Monahan’s Pier all the way to the Point Judith Light have been giving bass and blues almost every night this summer as Block Island’s Southwest Ledge and North Rip have also been steady producers of stripers but that’s no surprise. Fluking has been predictably slower, given the length of the season and all the fishing pressure from a long summer. Dave’s store has stocked up on Epoxy jigs for targeting bonito and false albacore as both species have made brief appearances from Cape Cod to Newport to Watch Hill and hopefully will reappear after this blow.

Smallmouth are less abundant in Rhode Island waters as compared to largemouth but do have populations in several ponds. Indian Lake in South Kingstown is a favorite place to target smallies as there is a decent access ramp, enough foliage on all sides to keep back strong winds and it’s a pretty place to spend an afternoon. Beach Pond in Exeter has smallmouth in addition to walleye, which are rare in Rhode Island. Typically, smallmouth are targeted with soft baits like Bass Pro’s Stick-O’s or Gary Yamamoto’s Senko worms. Smallie fishermen know they have a subtle bite, tending to hold prey in their mouths with a light grip. Keeping the rod tip down and line tight starts the feel of it. When you know they’re on, you lean a little into the take then haul back hard to set the hook. It’s certainly a touch that takes time. Smallmouth bass tend to be measured in inches rather than by weight and are colored with amazing dark and light shades of greens and black. 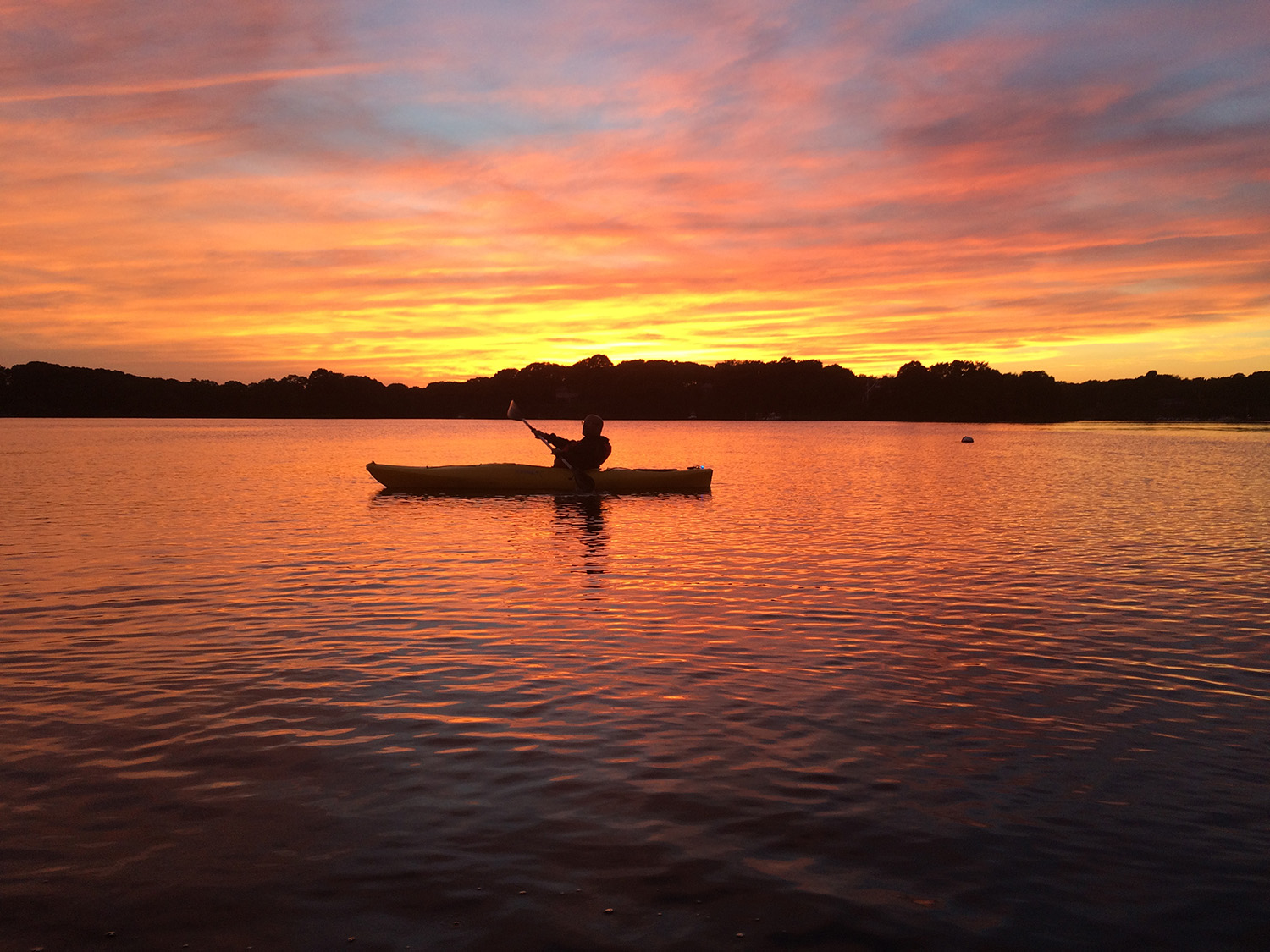 For freshwater fishermen, Massachusetts based fly and spin reel makers Cheeky, are hosting The Cheeky InstaBass Classic this month. It’s a smallmouth bass contest that’s catch and release so pictures of the catch are submitted through Instagram. For the older anglers, that means logging onto social media from the skiff, taking a picture and uploading it and then updating your status, all without dropping the flip phone overboard. For younger fishermen, this is already the way things are done for pictures of a kitten, what they had for lunch or someone jumping up and down while screaming because they flipped a plastic water bottle onto the table. It’s a very new world. There’s a fly and a all tackle division so no preference is given to fly guys and they provide you with a measuring tape and photo puck for submitting your winning catch. Costa Del Mar, Yeti Coolers and Oskar Blues Brewery are supporting the month-long contest and proceeds from entries will help raise funds for Trout Unlimited’s 5 Rivers Program. The InstaBass Classic runs through the end of this month and you can sign up at www.cheekyfishing.com.

Led by Executive Director Chris Fox and Project Specialist Elise Torello, a dozen kayakers paddled through a perfect postcard sunset south to the eelgrass beds. Once the sun had fully set and the slight bass lines of Charlestown’ Rhythm and Roots Festival could be enjoyed, slightly churning shallow water exposed the lights of the jellies.

“They have shimmering lines going longitudinally down their bodies”, Elise spoke of the magnificent creatures feeding in the salt pond.

preparing to kayak into a sunset

Small bluefish and big stripers could be heard just to the east of the grasses, feeding on an incredible abundance of one inch bait fish. When the bait were forced into great piles, the water felt like a great paddle wheel behind you, always behind you it seemed, with tails slapping and head bursting up to tear into more prey. Volunteer Bill McCusker guided paddlers visiting from as far away as Mystic and Brooklyn, with his spotlight to submerged fields of silversides which could be scooped up by the handful. 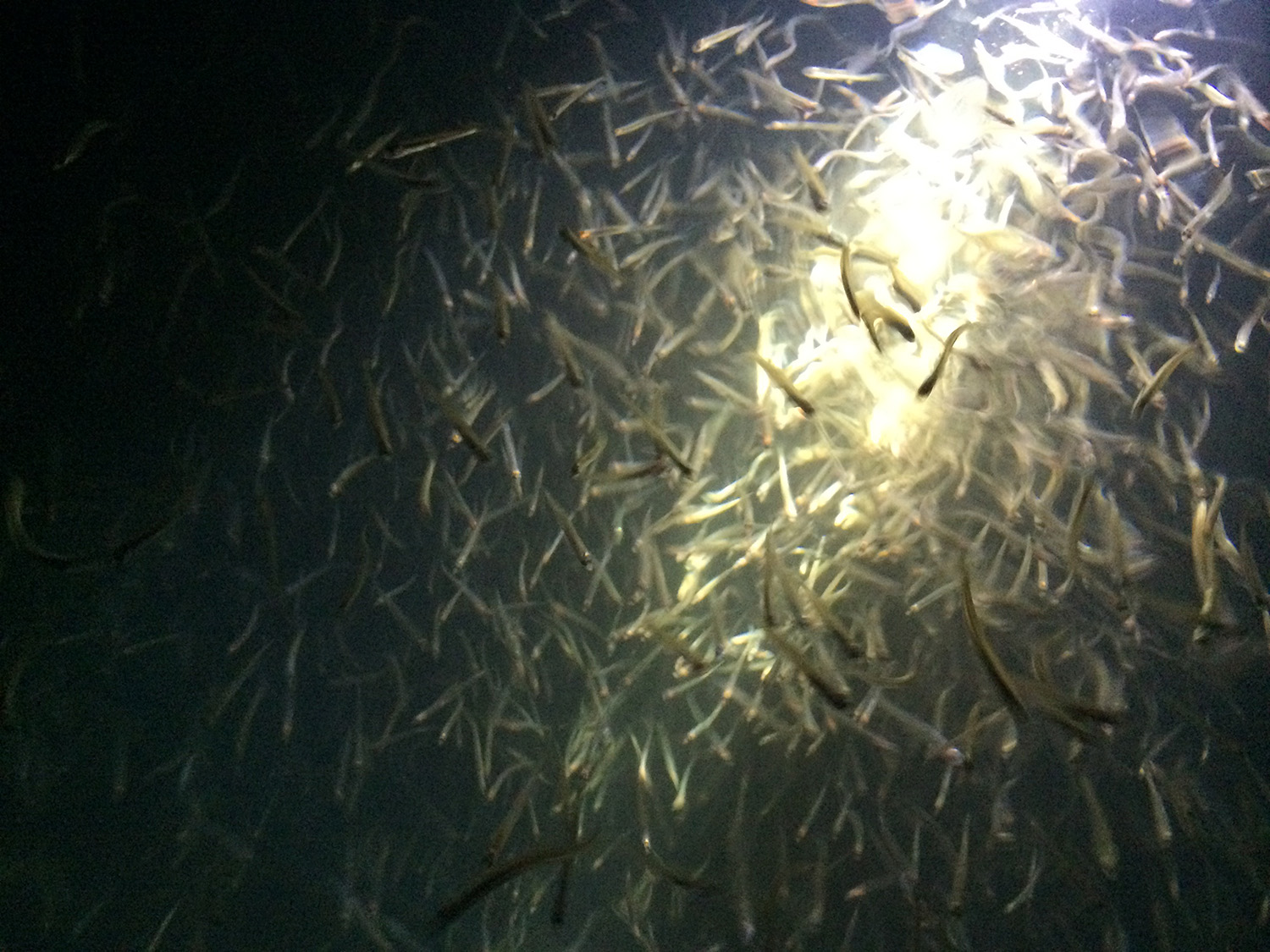 silversides in abundance. nature is cool.

We drifted slowly west as stars regained their sky and tiny lights appeared all around us. Ninigret is a magical pond, especially after dark where the pungent smells of a low tide shoreline fade as you move south, herons warn with their territorial croak and late roosting gulls fly just a few feet overhead. The WPWA invite people not solely to experience natural events like this but to benefit from their knowledge, experience and passion for fresh and saltwater. 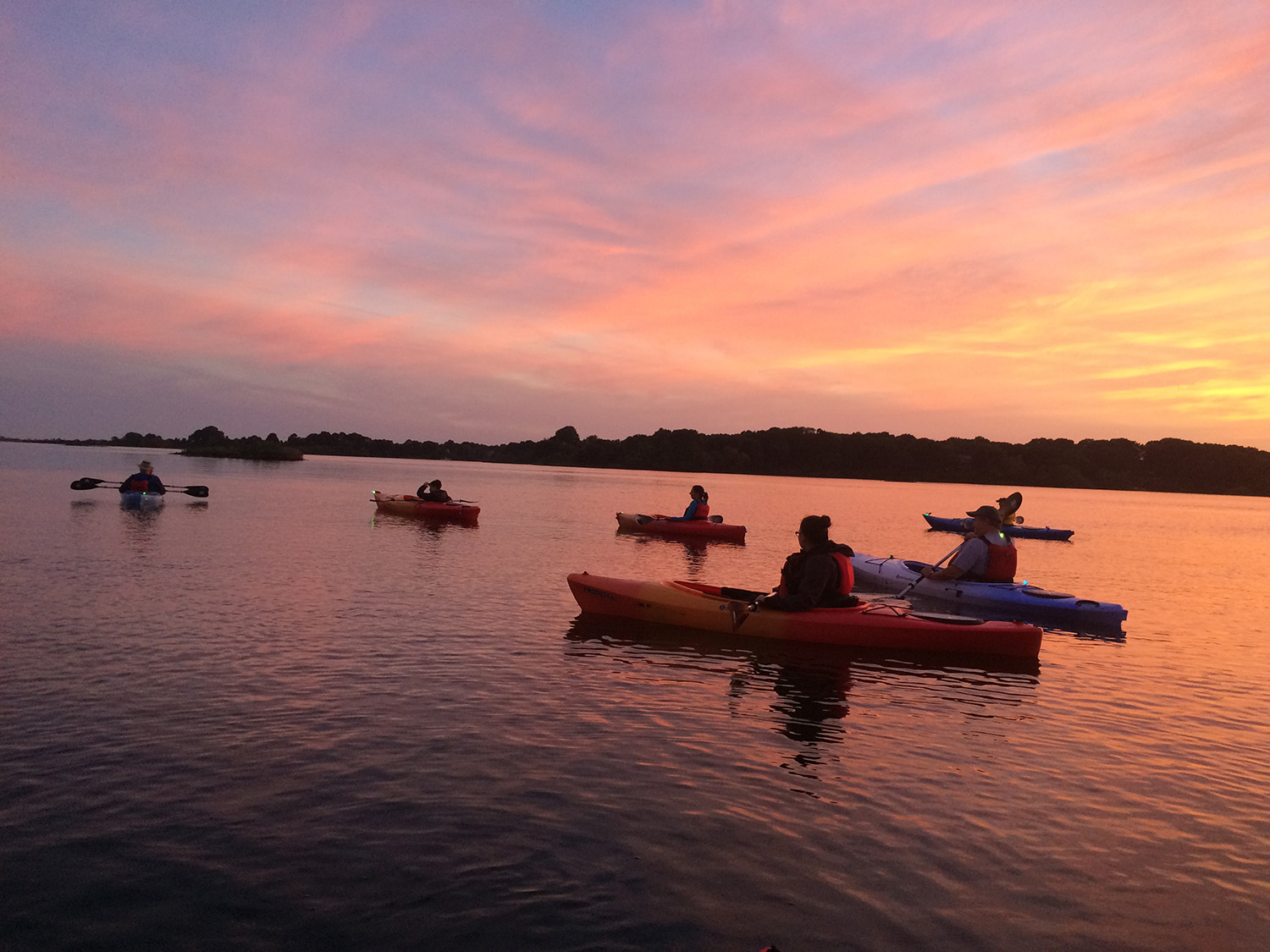 and then comes sunset

At night’s end, Chris led the pack back to the dock, all having enjoyed the pleasures of a quiet few hours in the midst of a setting sun and fading summer, surrounded by much of what makes salt ponds and those who care about them special.

Finally, RIDEM is looking for volunteers to help paint a few buildings and kiosks around the state. RIDEM has lots of big brown information booths which are in need of some repair and a coat of paint helping us understand rules and seasons, how to recycle old fishing line and to give the less ambitious something to park directly in front of so the rest of us can’t read the signs. If you have some time to donate to your state, contact Jennifer Brooks at Jennifer.brooks@dem.ri.gov or at 401.789.0281. 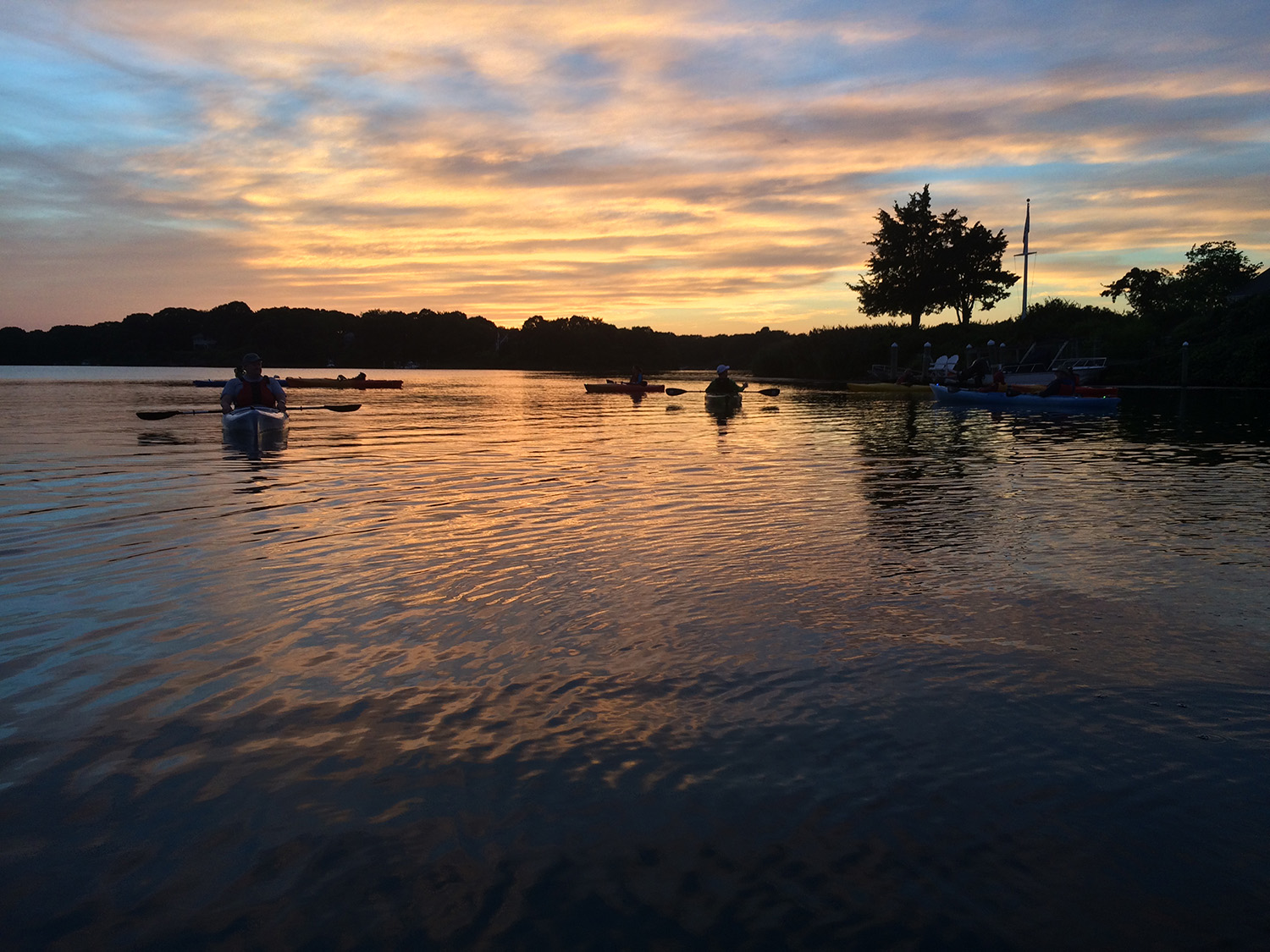 peace on a salt pond