This week we meet two fishermen who have never met but have remarkable similarities.

R.J. is a Providence high school student and Jon Fallow is a Brockton middle school teacher; together they show how fishing can erase backgrounds, ease differences and bring peace. 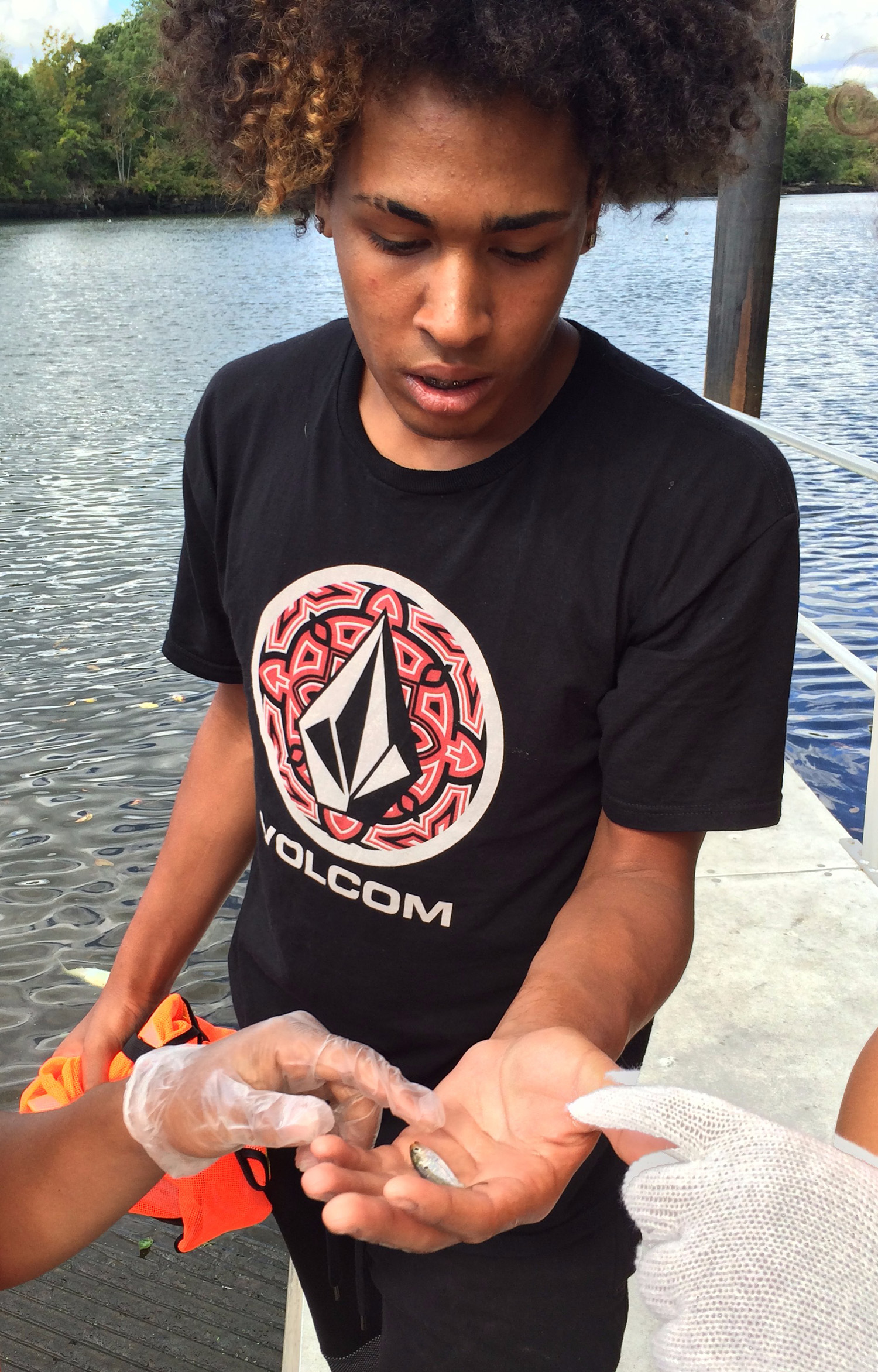 R.J. looks at a hand-caught shiner before releasing it back into the Seekonk RIver

Last week I met R.J. when I helped volunteers cleaning up trash at a Providence boat ramp. By cleaning I mean standing around writing about other people cleaning. It was a perfect late-summer excuse to skip the day job and walk along the Seekonk River as seven high school students from Providence’s A-Venture Academy took part in the International Coastal Cleanup, picking up other people’s garbage.

Jon and I met through a mutual fisherman friend up in Maine and fast became friends as well. Within a week, I had invited myself to go fishing on his boat.

Brockton has the thirty-first largest high school in the country with more than 4,000 students. Jon teaches Industrial Arts to students like R.J. and is an avid fly fisherman. A-Venture Academy is an alternative to an alternative. Not every young person flourishes in the crowded classrooms and busy hallways of public schools, not everyone can resist those murky temptations which often come with growing up. A-Venture offers 120 students a way around the wrong road in an environment of the positive reinforcement and attention they’ll need to thrive in adulthood.

In heavy untied work boots, R.J. stood about ten feet taller than me, with a fantastic shock of thick curly hair. He spoke with a low toned voice and a steady pace. He helped pick up bottle caps and carry garbage bags like the rest but always he kept looking at the sparkling river. I don’t know R.J.’s whole story and it’s really none of my business. However a young person finds their way to the A-Venture Academy is irrelevant here. What’s clear is that R.J. loves to fish. 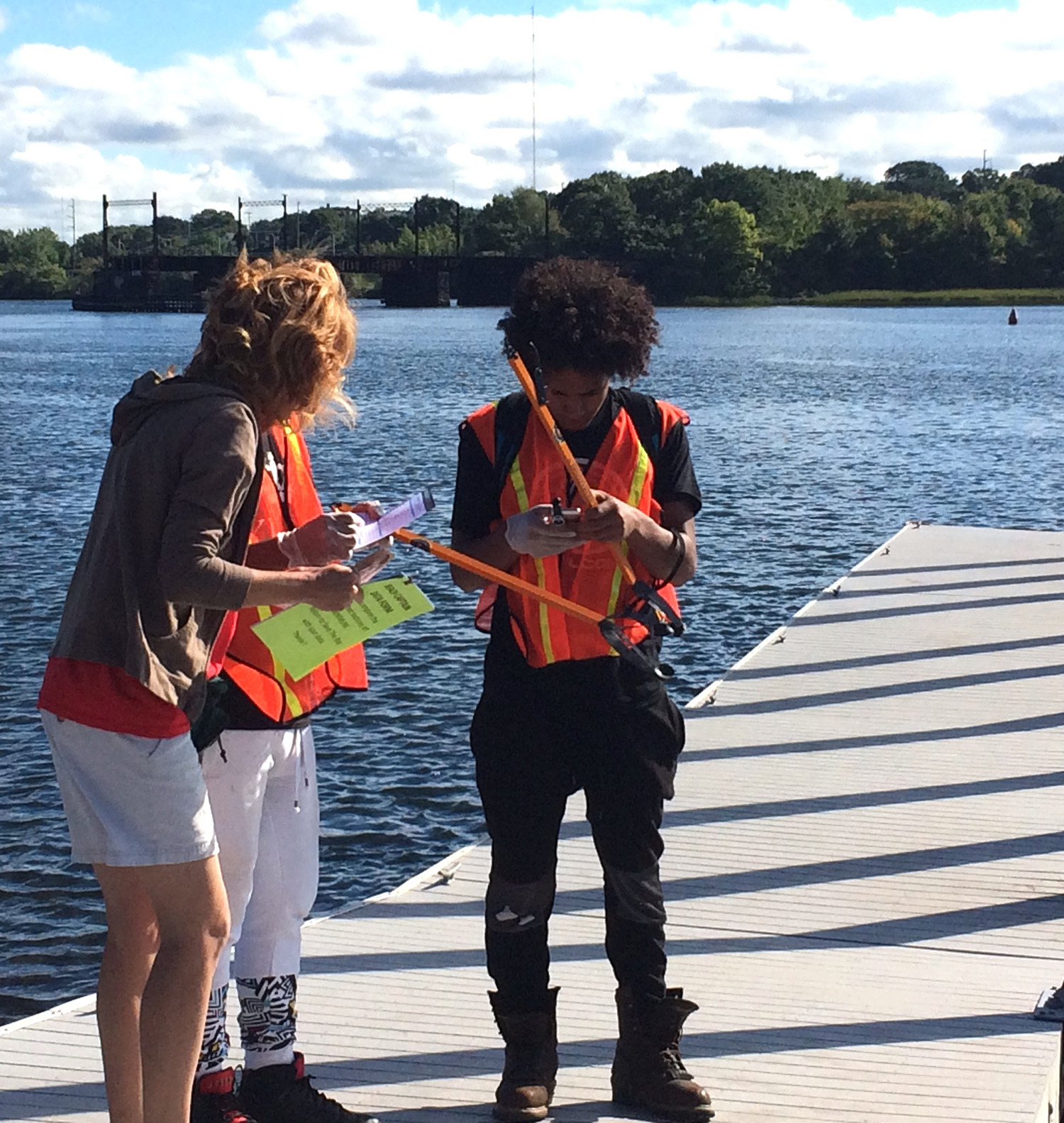 R.J. helps with a river trash cleanup in Providence

“I think he thinks it’s peaceful”, his mother told me. Throughout the day, R.J. gravitated to the water; he was the first to kneel down on the dock, the first to put his hands in the water. In Pawtucket, we stood on the white wobbly docks of Festival Pier, where one inch bait fish were schooling in between pilings and hugging the cut granite wall. I challenged him to grab one, certain there was no way he would corral a nervous, darting silverside. 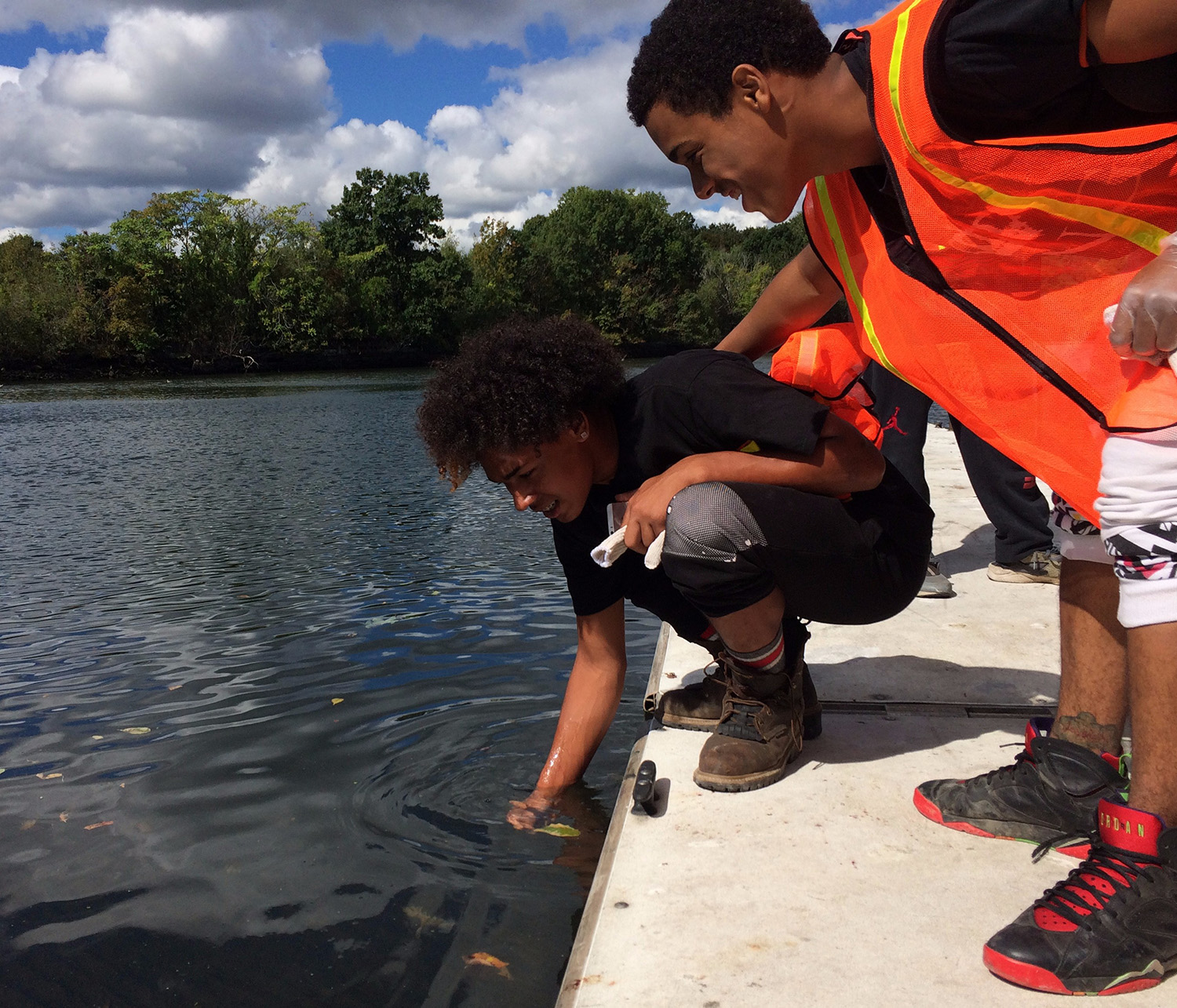 He cupped one in his hands on his fourth swipe.

Standing amongst the debris of nature and callous men, he returned the fish alive. 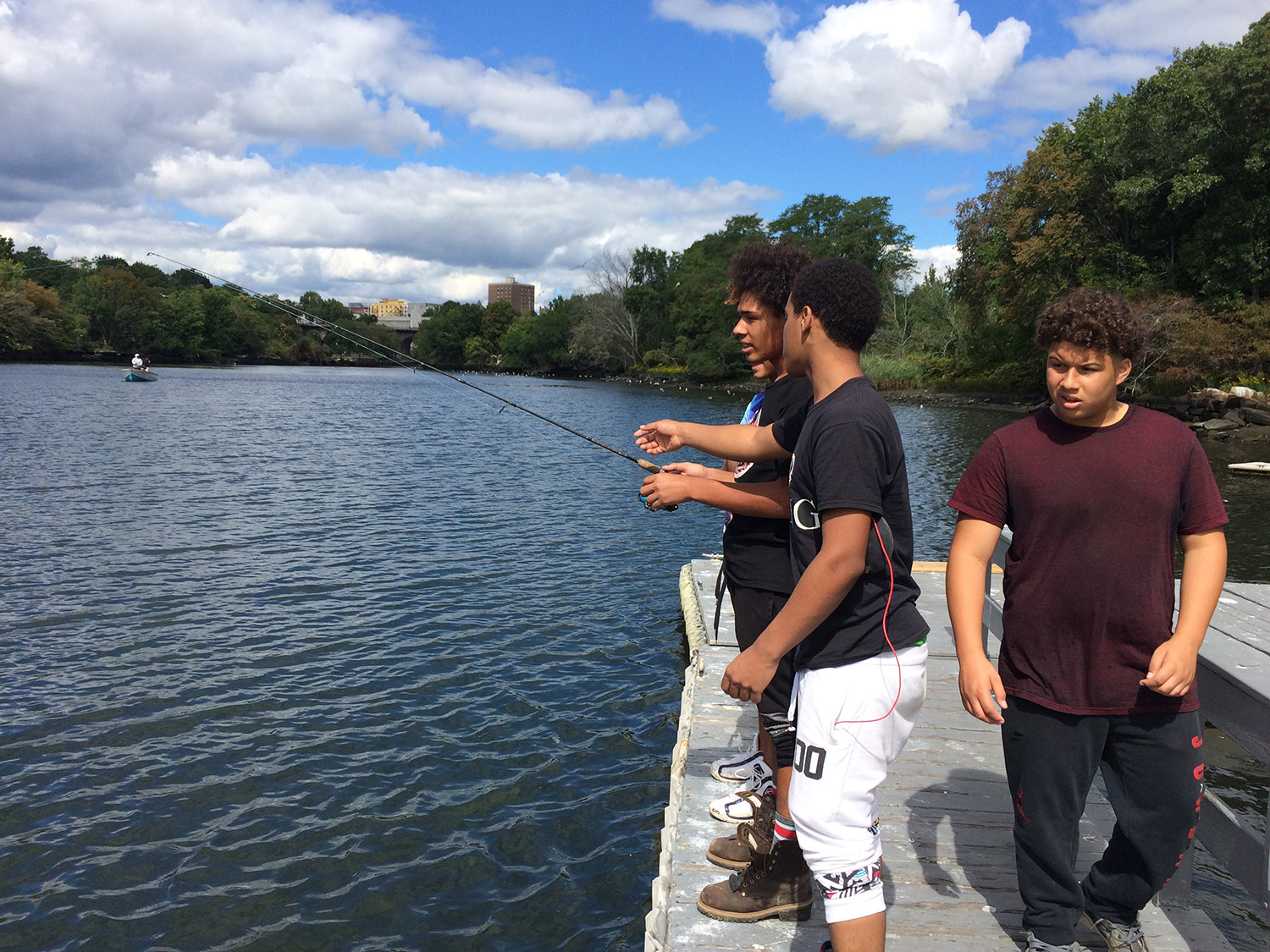 He fumbled a bit with the bail but I only noticed because I was there to write their story. Several other kids rushed over for a try. After a few rough casts, he surrendered it to another student and wandered off but kept looking back. Group dynamics, peer pressure, life; call it what you want, he came back for the rod. His cast needs some work. So does mine. He pitched it too high over his head so the light lure dropped just a few feet in front of the dock. After some practice swings, his following casts went a lot further out into the river. We talked bait, Kastmasters and how to slowly retrieve an imitation crippled herring. He listened and I know he took it all in. Without the obvious or subliminal pressures of his peers and the distractions of a free September day, I suspect R.J. would have figured out that rod and nailed it in a few more casts but there was more trash to bag. 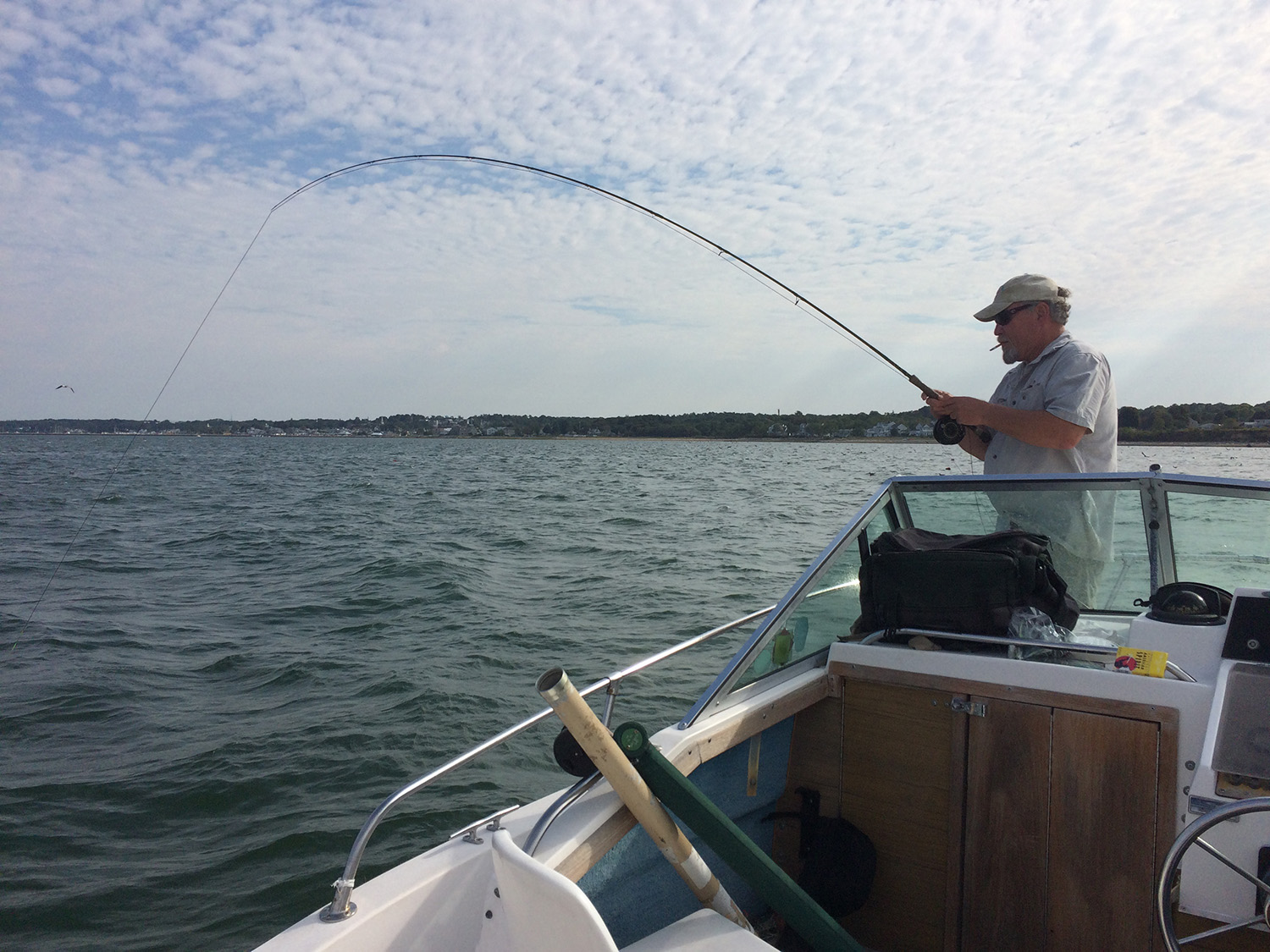 Jon fights another first striper ever

He fishes a 10 weight Sage fly rod from a rugged Grady White, sailing long arcs of sinking line from the bow, setting his hand tied Jonny Clouser flies to feeding schoolie stripers in Kingston Bay. He doesn’t mind fishing alone. Like many older fishermen, he needs his glasses to read the caller i.d. but can spot a small circle of terns feeding over bass from a thousand yards. After a lifetime of fishing, Jon retains the spark and excitement of catching fish, like each 20 inch striper was his first ever.

“I just want to go fishing”, R.J. said. He’s fished from Massachusetts’ Horseneck Beach, caught catfish in Carver’s Myles Standish State Forest, even landed a sand shark from the beach. R.J. and his mom have camped along beaches with no power or cell phone signals, fishing and swimming together. Lots of us have it tough, as we fuss about car taxes, getting the dog washed and endless Saturday errands. For the young, life can have more pressures than opportunities and fishing often helps build confidence as you’re holding a little life in your hands, deciding to catch and release or not.

Jon travels to catch stripers, brook trout and steelhead and plays bluegrass with the Wildcat Bogstompers. His shingled house is a ruffled assemblage of rods, reels, fish art, mandolins and amps; all the trappings of a good balanced life. My brief conversations with R.J. had background beats of rap and hard lyrics which made me squint. Brockton’s a long way from the sea but as time allows, Jon leaves his mooring and heads for Clarks Island and a few secret spots. The paths of these two fishermen likely will never meet, but they share a common love for water and fish and fishing. Both, I would offer, find peace out there on a bow or beach. Norman Maclean gave us, “Eventually, all things merge into one, and a river runs through it.” 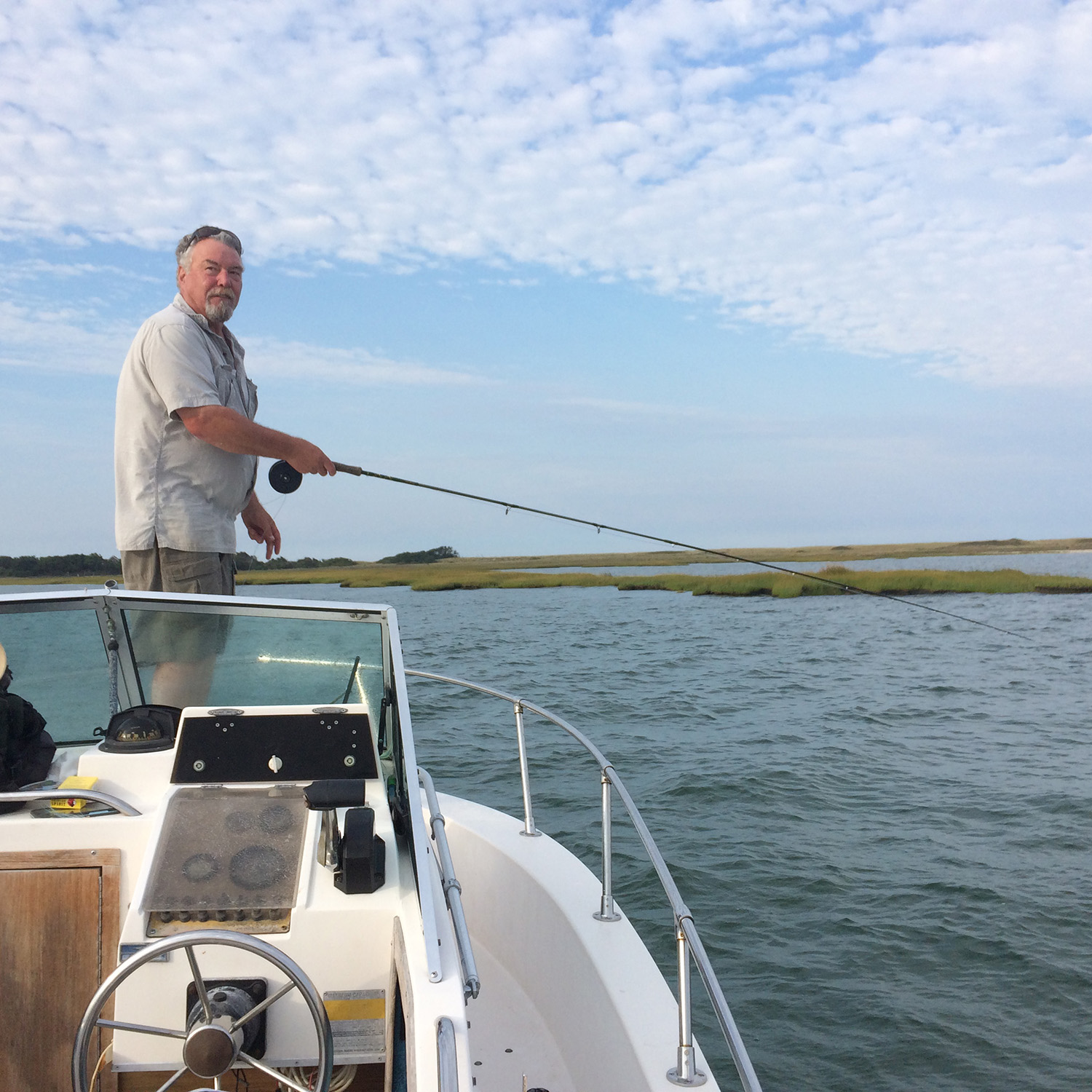