Winter’s arrival has not slowed Sven and the crew at the Peace Dale Shooting Preserve in South Kingstown. The foundation for a 16 lane indoor shooting range has been poured and is curing. This important step means construction of the facility will follow and South County will have a premier, safe place to sight-in and practice with firearms. Memberships are now available in two levels, platinum and gold; both offer excellent opportunities to shoot at one of the 25 yard lanes up to a 50 caliber, as well as access to the lodge area after your range time. The post and beam construction will offer lots of space for relaxing and from the looks of the architect’s renderings, this will be a fantastic oasis right off Rose Hill Road.

The Preserve will rent handguns and offer firearms classes for handguns, shotguns and carbines. If you think it’s time to improve your skills, secure hard to find range time or want in on a real destination for shooting enthusiasts, a limited number of memberships are being offered now with a target opening date of May, 2017.

Starting on January 14, the Preserve will host several tournaments for the National Sporting Clays Association. Shoots will also be held on February 18, March 11, April 8, June 3, July 15 and September 2. Set on 125 acres, owner Sven Soderberg takes care to regularly change stands so shooters don’t become too accustomed to each station. It’s an exciting to see clays fly high, far right or run like rabbits and as they take great care in providing an easy atmosphere, there’s time to change things up for your group. And, if you have a merry prankster like Block Islander Geoffrey Hall commanding the remote, you may never know when or from where your next clay will come and that’s really the fun of it.

Brother Geoff after a big day in the fields

Speaking of, Brother Geoff managed to sneak away once again from the grind of his day job for some island pheasant hunting. For decades, pheasant season ran through the late fall and winter but all that’s changed. The season this year is just a few days. Shooting a limit was almost a given years back but populations have crashed over the last many years for some of the usual crowding/ground cover issues but also in large part to the arrival of raptors. 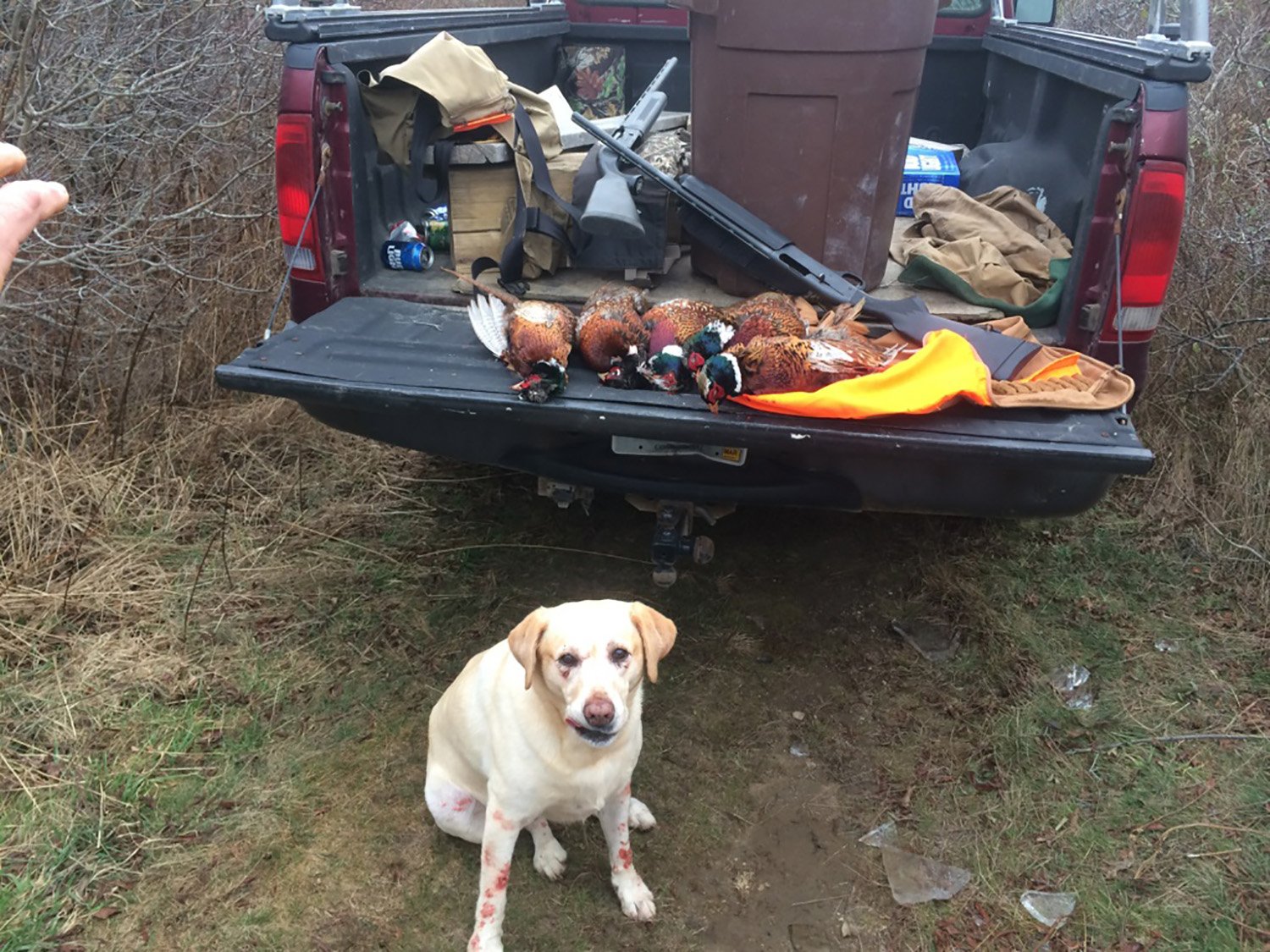 a happy dog & a tailgate full of dinner

Portland, Maine’s Biodiversity Research Institute built a raptor research station on the island with the help of The Nature Conservancy and over the last few years, they’ve caught and banded eight different species of raptors. Merlin and Peregrine Falcons, American Kestrels, Northern Goshawks, Red-tailed Hawks and Northern Harriers were among the species identified. 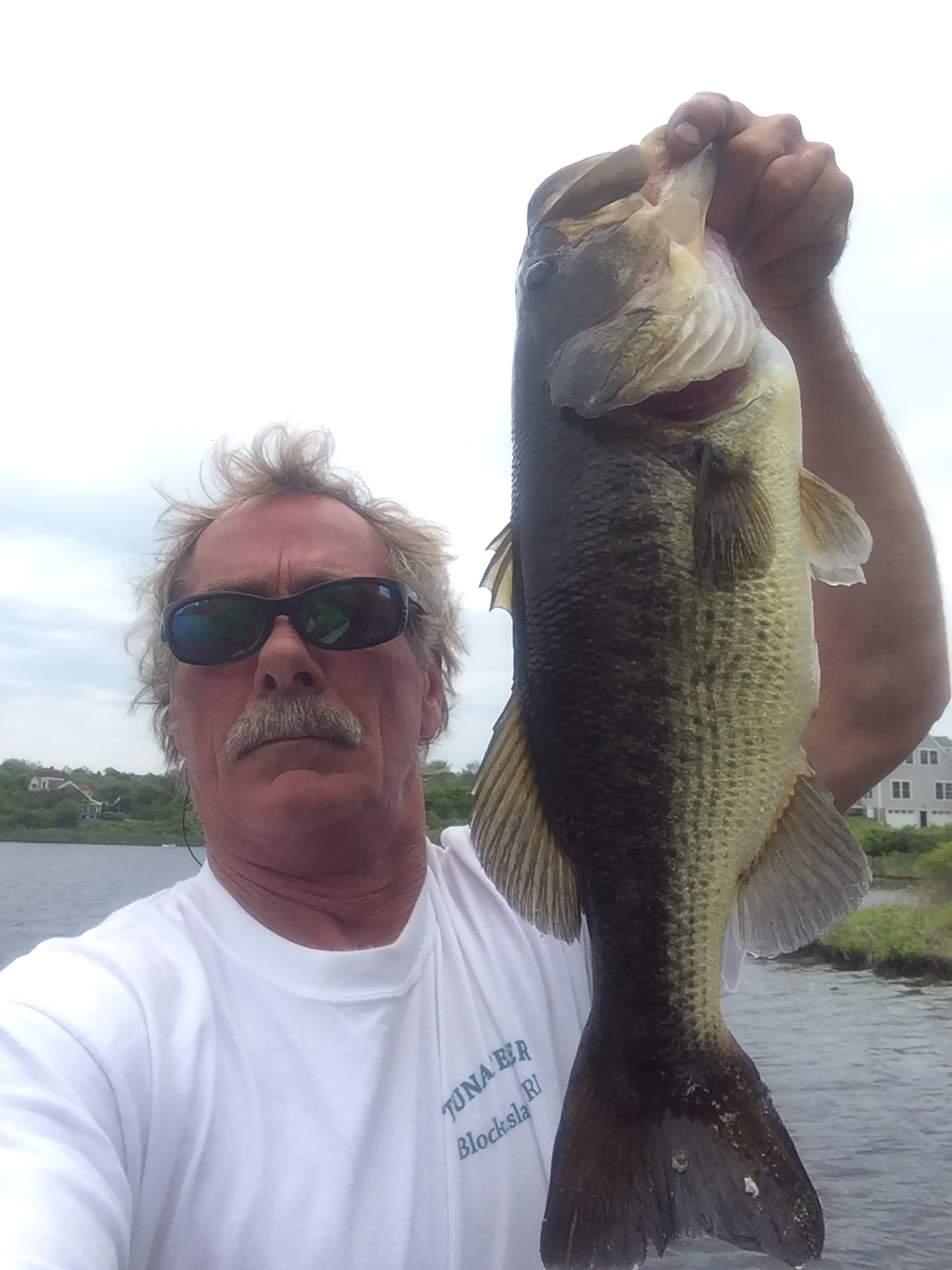 Brother Geoff also has an affinity for catching bass. Big ones.

Two species with a particular taste for medium sized birds, like Ring-necked Pheasants, are the Cooper’s Hawks and Sharp-shinned Hawks. As pheasants had no real predators on the island, save for the Hall brothers and a small cast of Carhartt-clad characters, they thrived for decades and made for excellent post-tourist season sport. Cooper’s Hawks are fast, agile hunters who crush their prey with their talons and will even hold them underwater until dead.

Because young pheasants will wander in fields as they learn their wings, they make for easy targets.

Here’s to a recovering pheasant population and the return of good cold days walking from one side of the island to the other, returning with a field coat full of long tail feathers.

The last round of trout stocking has finished, with 1200 rainbows and brookies being released into Olney Pond, Lincoln Woods State Park in Lincoln, Upper Melville Pond in Portsmouth, Carbuncle Pond in Coventry, Breakheart Pond in Exeter’s Arcadia Management Area and the Roundtop Ponds in Burrillville.  If we get the ice we many of us hope for, it should be a banner year in those ponds.

RIDEM Marine Fisheries will hold a pre-hearing workshop on proposed recreational and commercial regulations for striped bass, bluefish and tautog as well as commercial management of menhaden. These workshops are a really fine opportunity to speak up or ask questions about their agenda. Comments are not on the official record and go a long way to prepare you for the official hearings. This important workshop will he help on Tuesday, January 10 at 5:00 pm in the Hazard Room at URI’s Coastal Institute Building. A second workshop will be held on February 6 at 5:00 pm in the same room. All this culminates with a public hearing on February 13 at 6:00 pm at URI’s Bay Campus’ Corless Auditorium.

To close out a divisive year ringing to the tune of “Drill Baby Drill!”, still-President Obama has red-penned offshore drilling in areas of the Atlantic and Arctic Oceans. Wherever you wade in the turning political tide these days, for now a large section of the continental shelf from Massachusetts to Virginia will be spared from oil rigs.

A very Happy New Year to you all and a toast. First to the health and happiness we all deserve and then to a full year of tight lines, wonderful memories aboard and from the shore and an endless bounty of colorful fish tales that keep guys like me happily writing about sportsmen like you who bring so much light and character to our small state. Cheers to you and as always, thanks for reading.