Tim Terranova. Tim Terranova. That name should be in your mental Rolodex.
Captain Tim Terranova runs the Bonita II, a 36’ Hatteras charter boat out of Watch Hill. He has the only commercial charter boat slip there, thanks to good fortune and a moment of his own charity. His pretty boat sits in fine company with shiny teak classics glistening in a hot sun and million dollar four motor center consoles shining as examples of how much attention some people need. Tim took us fishing and in less time that it to leave the harbor, he found fish. 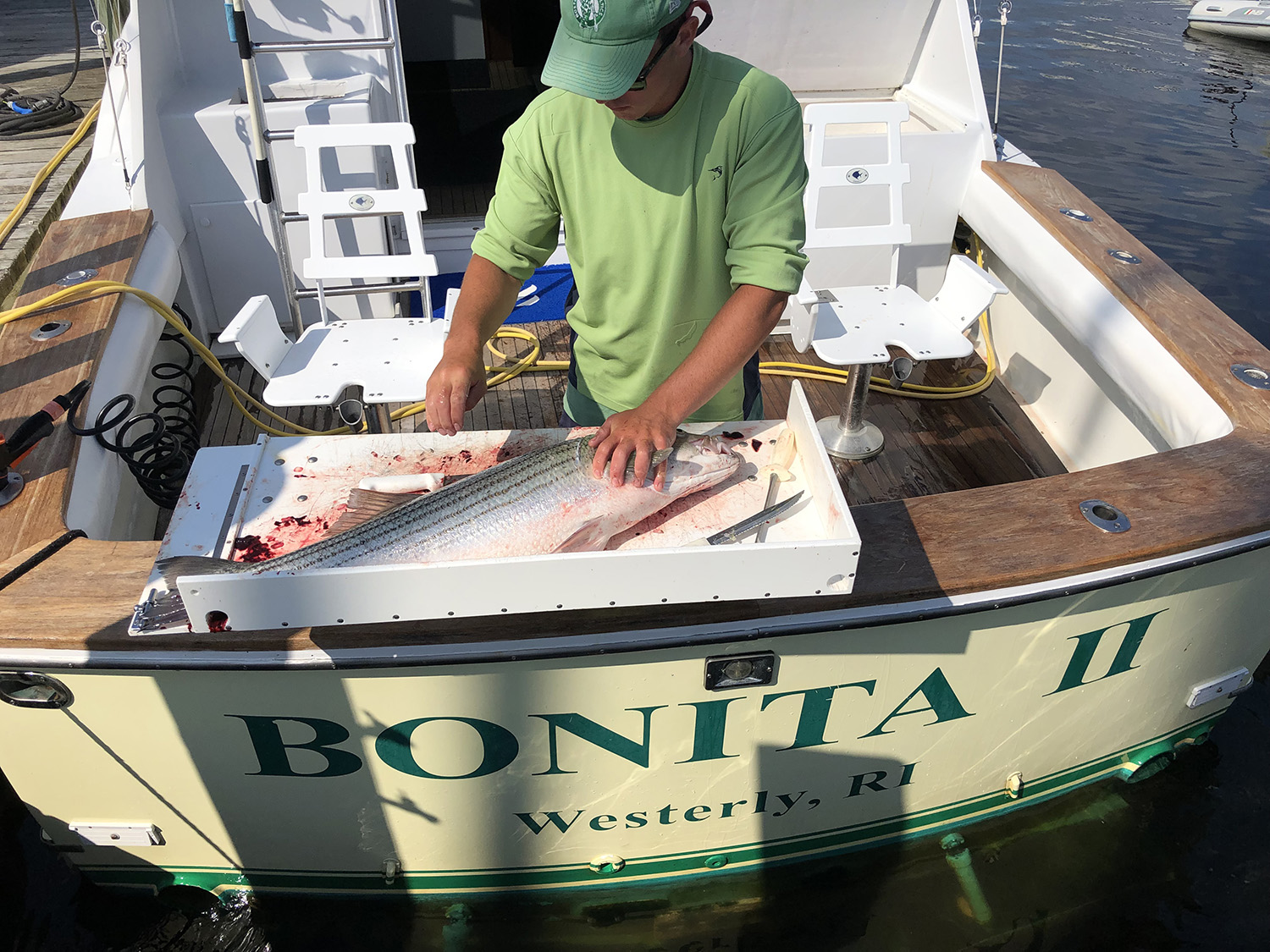 fresh off the stern, stripers are filleted for dinner

Tim is the son of a charter boat captain; his father took sports fishing for 55 years. Tim’s been taking people catching for 30 years on his own and has that undeniable ease of a captain who knows his business with a vision for each day. Fishing is a funny thing; some come to it later in life, some are born with seawater in their veins and in reflection, couldn’t imagine doing anything else.
Walking the dock, we passed a crew of white shirts rubbing right to left on lines of already glaringly bright teak work. While Watch Hill clings to their pretentious exclusivity, it seemed silly to see adults sweating under a high summer sun, polishing the same old wood, just so a fan of old wood might stop by and admire the shine.  Meanwhile, three of us set out to catch some stripers in possibly the worst conditions ever: flat calm seas, bright sun and high barometric pressure. Tim was unconcerned. He had an ease that wasn’t bull, it came from understanding conditions, assessing his new sports and deciding how best to catch fish. What more could you ask from a charter captain? 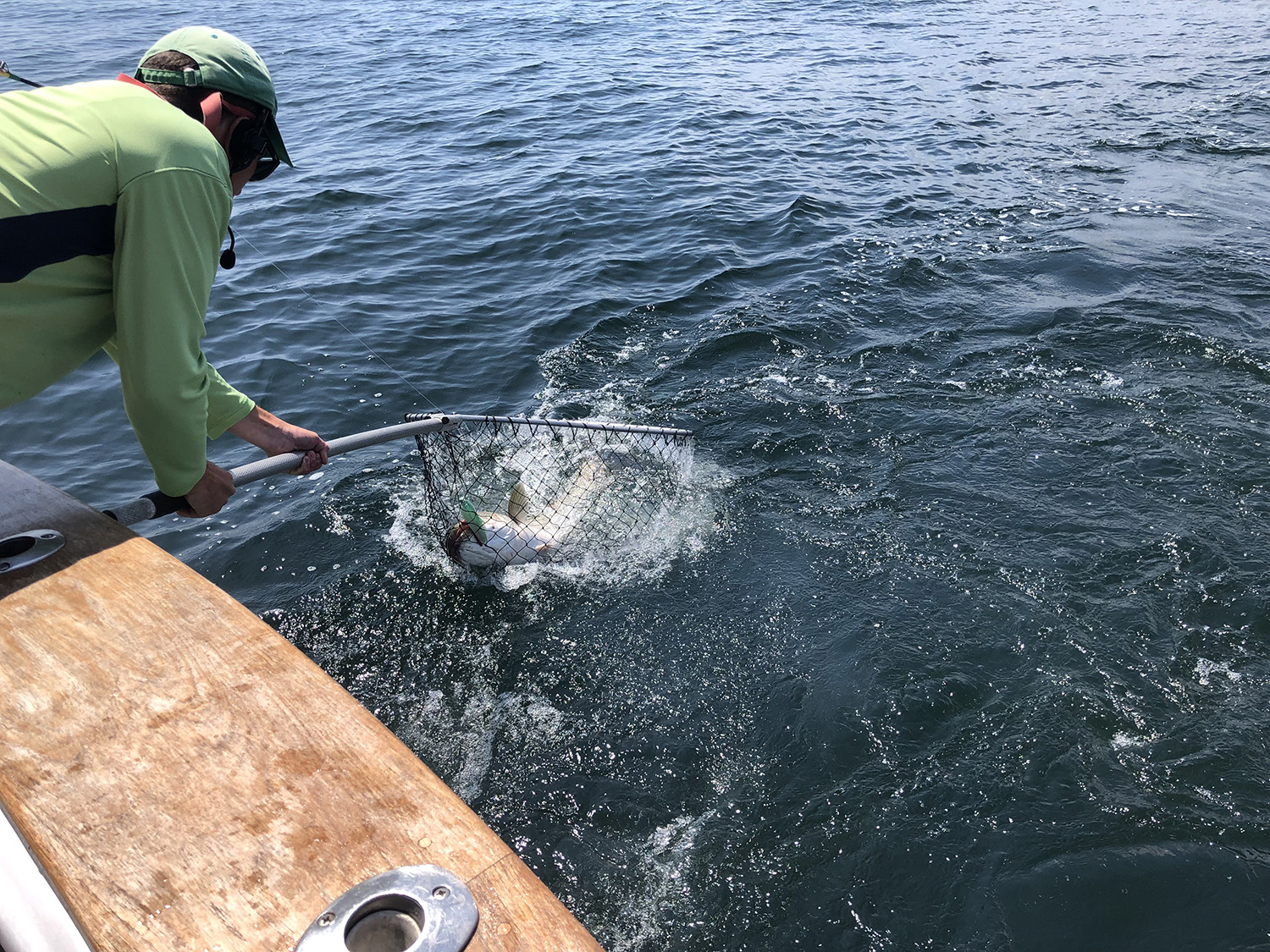 The Bonita II has an ample rear deck space and a cabin with just enough bunk space for those with weak bellies or worn down from reeling in their first fifty. As Ronnie, Jack and I steamed slowly south, the wood got me thinking.
There was no shiny teak on the rear deck, just two chairs, two rods, two gimbals, one big net and a wash down hose to keep things clean. Everything needed a little elbow grease.  There’s something really important to be said about worn woodwork wrapping a stern. It’s part of why Tim catches fish. 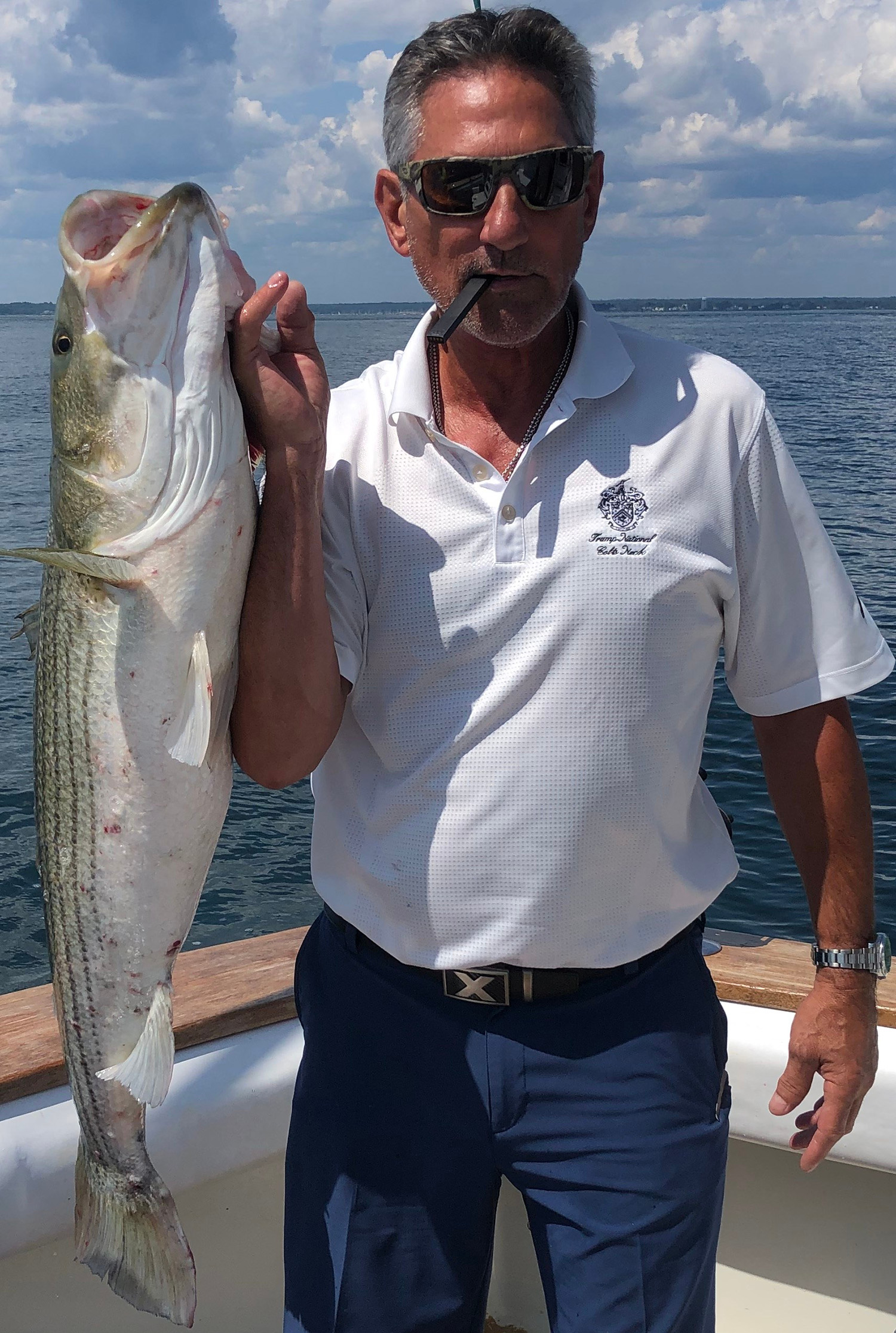 Jack takes the lead with a solid 25# bass

My uncle David still has had the same kitchen forever. He worked really, really hard and retired well. The old brown kitchen works just fine, he says, because, more importantly, he raised four kids and put them all through college. They are all class acts acts, raising families and enjoying each other’s company. And he packs in his kids and their friends into that kitchen every chance he gets. New shiny trim above a fridge or wood grain this or that doesn’t matter to Uncle David. Tim and his mate Brennan Kane aren’t spending whatever down time they have, stroking on their hands and knees to polish teak, because they have leaders to make, engine oil to change for two Cummins engines and strategy to be made to catch more fish. It’s pretty clear Tim knows what’s most important and that’s putting fish on the hook.  We could all learn a good lesson about what’s important and what’s just shiny from my Uncle David.
Within twenty minutes of leaving the gilded harbor, Captain Tim put us on fish.
Big fish.
Thanks in large part to Brennan’s patience with new sports and a headset tuned into the wheelhouse where Captain Tim oversaw everything, the first few fish were shy of keeper size but so fun. The next fish were larger, stronger and uninterested in coming aboard. Jack was easy on the rod, opting to stand at the rail and fight hard. The next few fish were in the high twenty to thirty pound range and we sat to fight them. After the captain spun the boat around and Brennan payed out enough line to hit his marks, Ronnie was on deck. Just a few minutes of pulling on a skirted jig, Ronnie landed a nice fish in the high twenty pound range but we were just estimating. 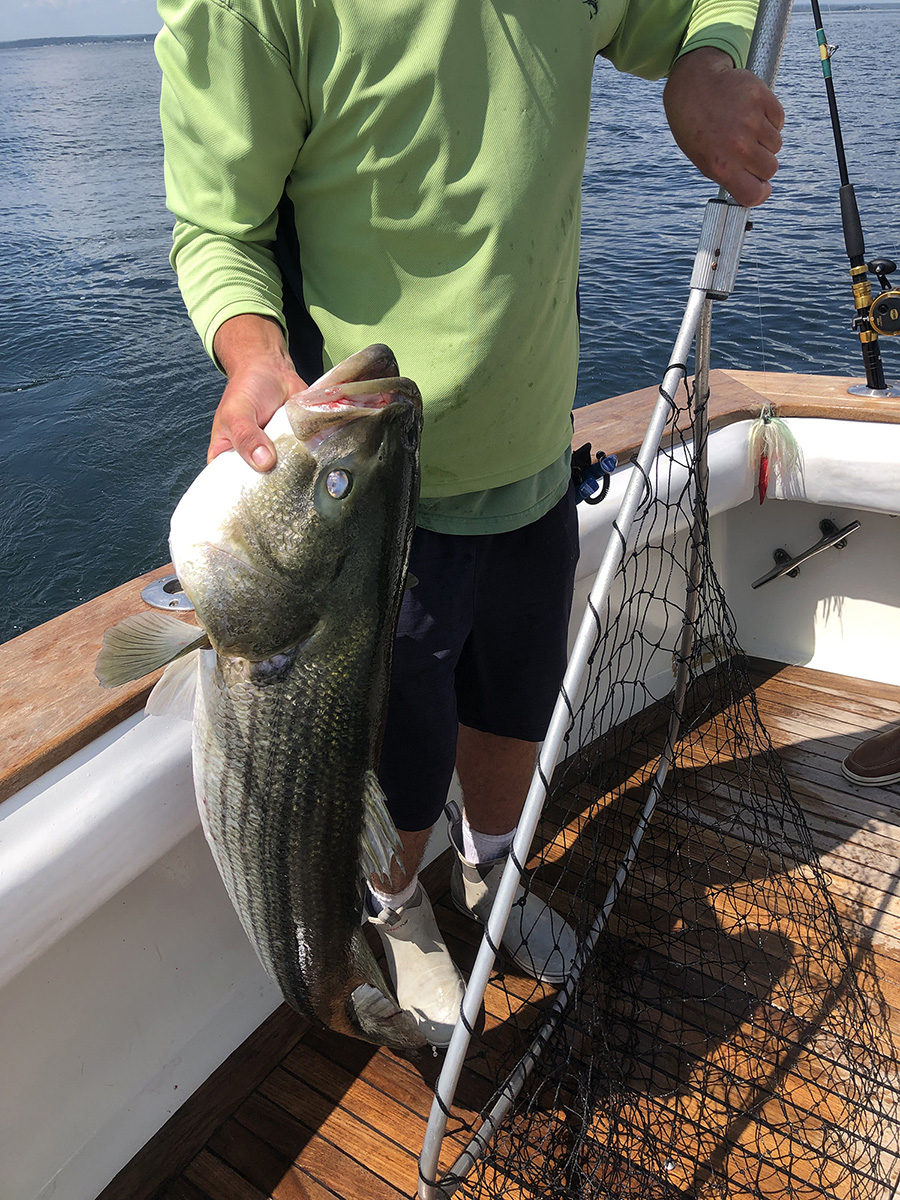 With careful, practiced guidance, Brennan did an excellent job taking fish from the net, carefully hoisting them for obligatory pictures, then cradling them off the side, washing oxygen over red gills. Too often, tired fish are carelessly Bill Danced overboard without regard to the rigors of the fight then sadly turn white belly up. It’s estimated now the 9% of all stripers released by recreational fishermen end up dead. Cheers to Captain Tim and his crew for doing their best to protect the fishery that puts food on their table.
After an hour of hot sun, the sports were weary. Brennan offered up a fresh line. Ronnie left the cabin shadows to get back on deck. He pulled a few times, took a half turn on the wire line and kept steady. His reel began to sing one fast second after the rod tip almost slammed into the rail. Ronnie set his feet for battle, turning the handle, trying to take line even when the fish took more. Ten minutes in, he was ready for a cold towel but Brennan was there to net a solid bass, maybe fifty pounds, maybe it didn’t matter because she was a beast.
After more photos, we steamed for the harbor with a few fish in the hold and phones full of pictures. Captain Tim Terranova and his crew know where the fish are but don’t think for a moment it’s as easy as following his boat or taking a ride and ghosting his GPS numbers. There’s way more to the business of charter fishing and it’s equally clear the Bonita II has the history, patience and skills to find fish. 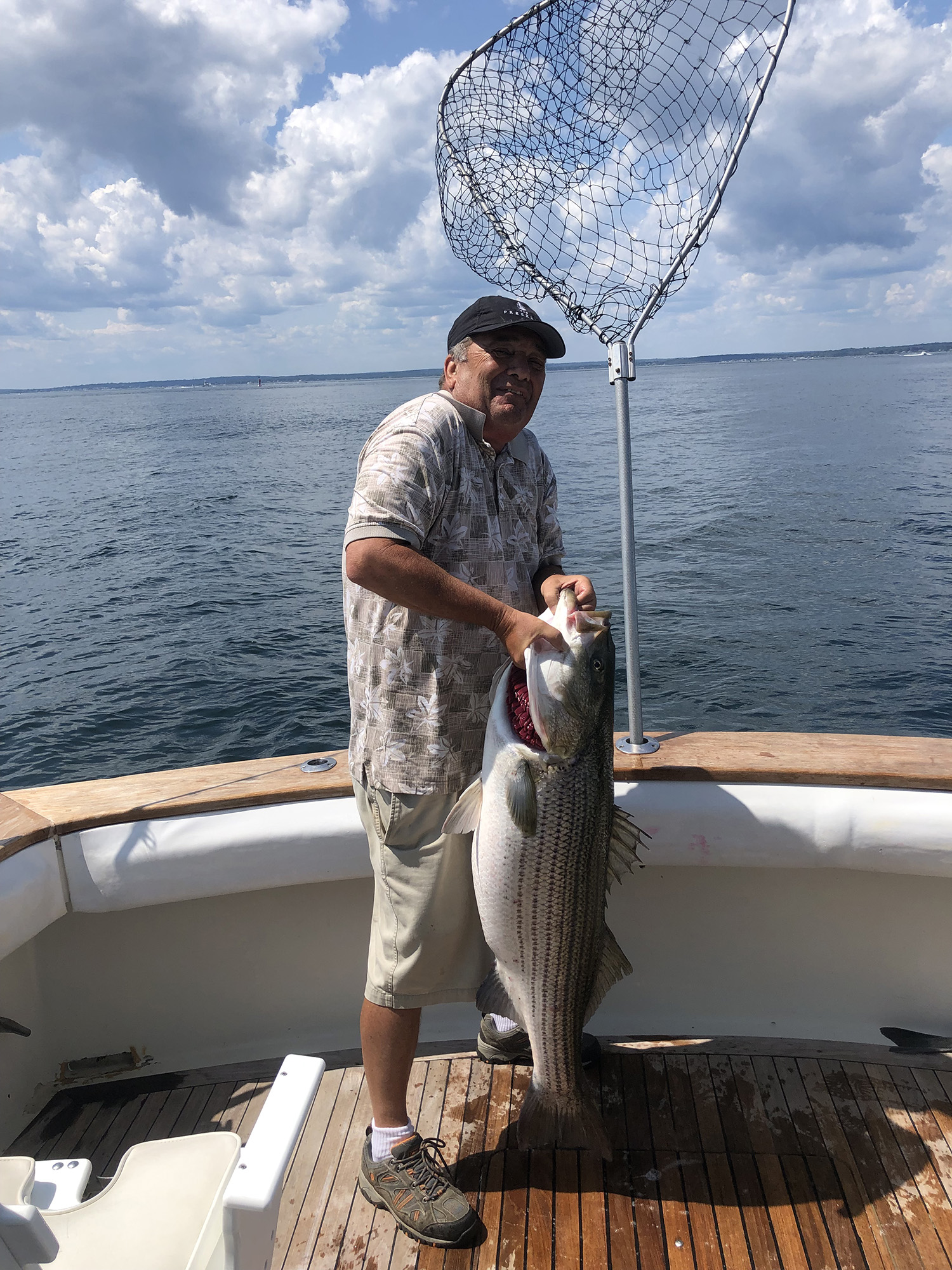 This week we turn the boat around for a second look at some characters and their greatest hits from 2018. What fun. One of the founders of RI Kayak Bassin’, RJ Alves is a force, to say the least. And it’s all positive. His highlight was the, “First RIKB tourney: saved...
Keep Reading

All part of the deal, the blindfold is on The blindfold was tight but part of the deal. That old green bandanna smelled of unpleasant sweat and salt but sacrifices are necessary when you want an inside line from the best fishermen. Bouncing through some southerly...
Keep Reading

Striped bass of all sizes have moved into local waters. Many seem to be holding up high in Narragansett Bay near the mouth of the Providence River and around the islands. This time of year classics like Yo-Zuri Crystal Minnows, white or pearl Zoom Fluke’s and...
Keep Reading