Competition or not, September fishing is top notch

The world of competitive freshwater fishing is exciting to say the least and the Ocean State is lucky to have several groups who take advantage of our many freshwater resources and in many cases, relatively low fishing pressure.  Most groups have semi-regular standings and even hold banquets at season’s end but my experience has been that they’re tough to get information out of, tough to find out where they’re headed next and it’s really tough to find one whose website has been refreshed in ten years. Then came the RI Kayak Bassin’ group. Something was different, from the social media presence to RJ Alves’ big ole’ smile on both sides of every post and the good people who welcome everyone to just go fishing. 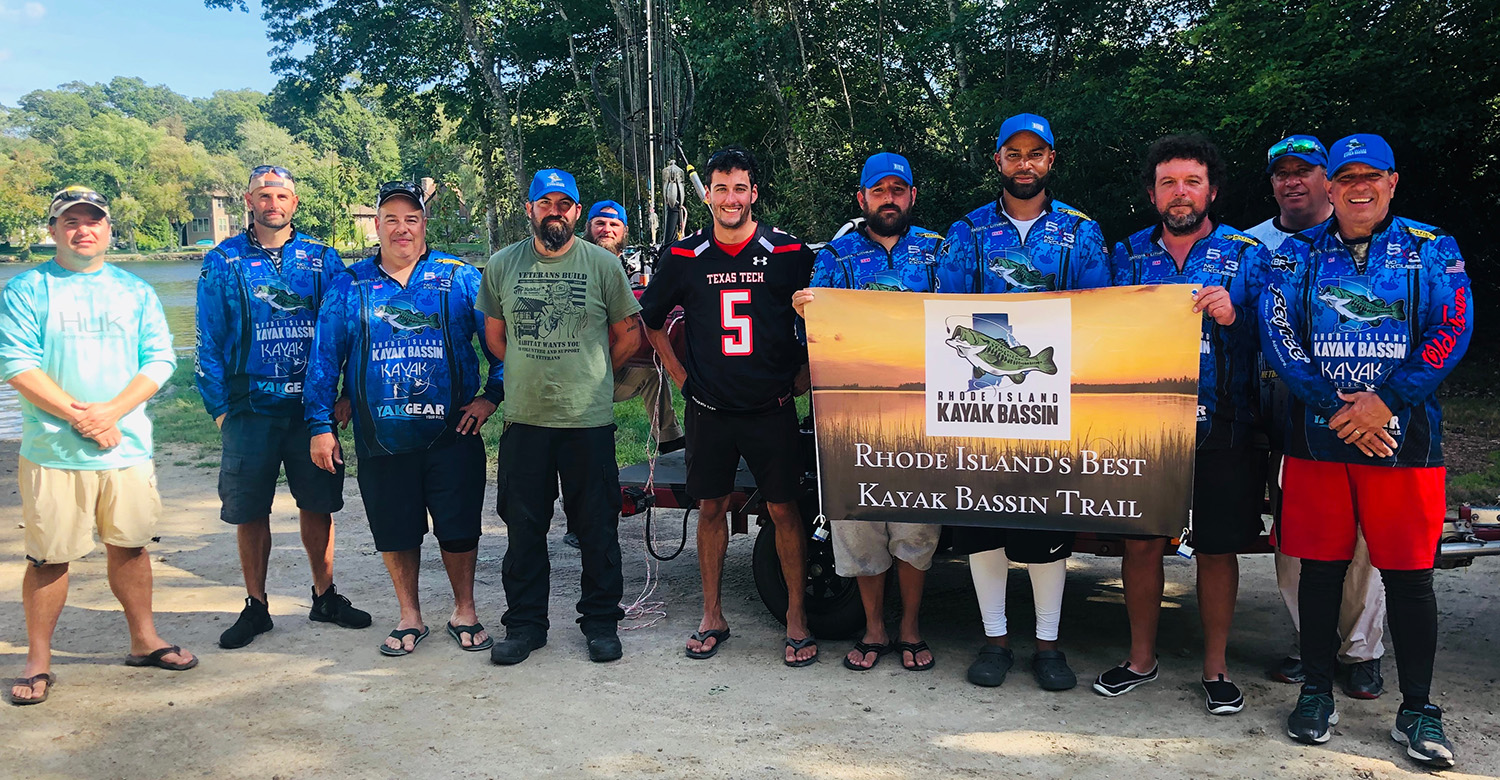 Their sixth tourney event was at Keech Pond in Gloucester and as usual, was well attended. By now, we’re all pretty familiar with the regular top finishers, like Kevin Amaral senior and junior, Paul “Lunker” Lopes and Chris Catucci and they all delivered.

This group really shines in the hospitality to new fishermen and women.

This tournament was won by Chris Catucci who logged in 69.25” of largemouth with biggest measuring 15.75”. That’s an impressive fish especially considering most fishermen in these tourney’s have little to no history with the ponds. Second place went to Mr. Kevin Amaral with the largest fish at 14”. Kevin’s total weighed in fish was 65.5”. Third place was won by Ryan Bessel with 38.5”.

RJ Alves, the man and laugh behind RIKB

Cheers to the group, to their growing membership and for their focus on that while there are always rules and the ones which guide the kayak bassin’ group are indeed strict, the whole reason good people go fishing is to have fun. Next week we’ll wrap up summer at South Kingstown’s very public Indian Lake. 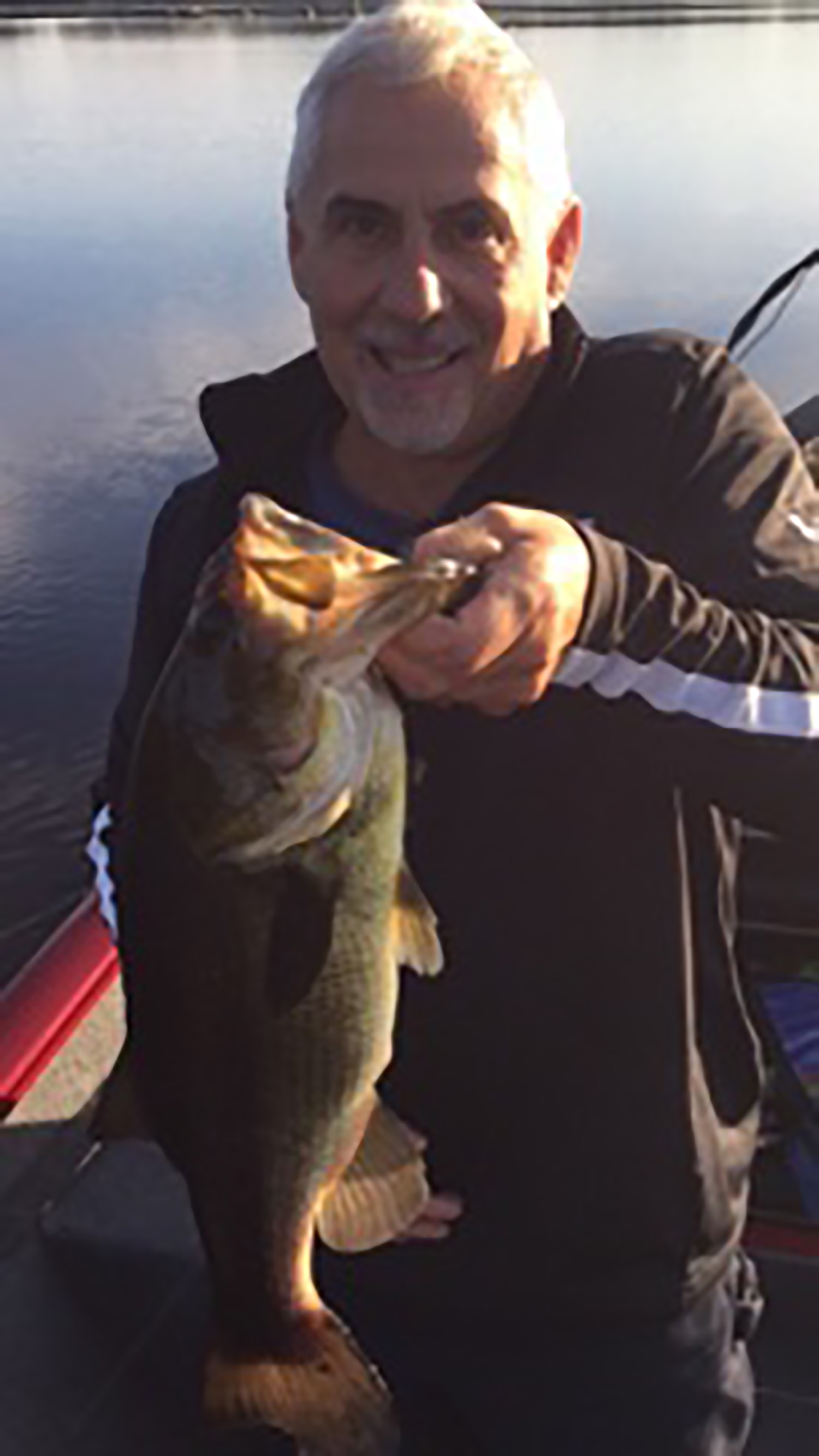 Since no fresh water report would be complete without a virtual visit from South County’s newest fishing hero, Bob Buscher, he’s getting close to his goal of catching and releasing 1000 pounds of largemouth bass caught this year.

Consider that for a moment So far, as September settles in to gobble up what we think is still summer, he’s caught more than 800 pounds. There’s plenty of space left on the calendar to reach the goal and we’ll be there to celebrate.

North country angler Jason Anctil has been busting his hump doing the day job but finally managed to get some down time, which he spent catching a 200 pound blue shark. Then he was back on the sweet water for some decent northern Rhode Island largemouth then back on the salt for a sweep of stripers. The sign of a true family fisherman is that they stay focused on paying the bills but the minute some clear space arrives on the calendar, they’re off to the water. “It’s an obsession but it’s pleasin’” wrote the poet, Robert Hunter. Amen to that. 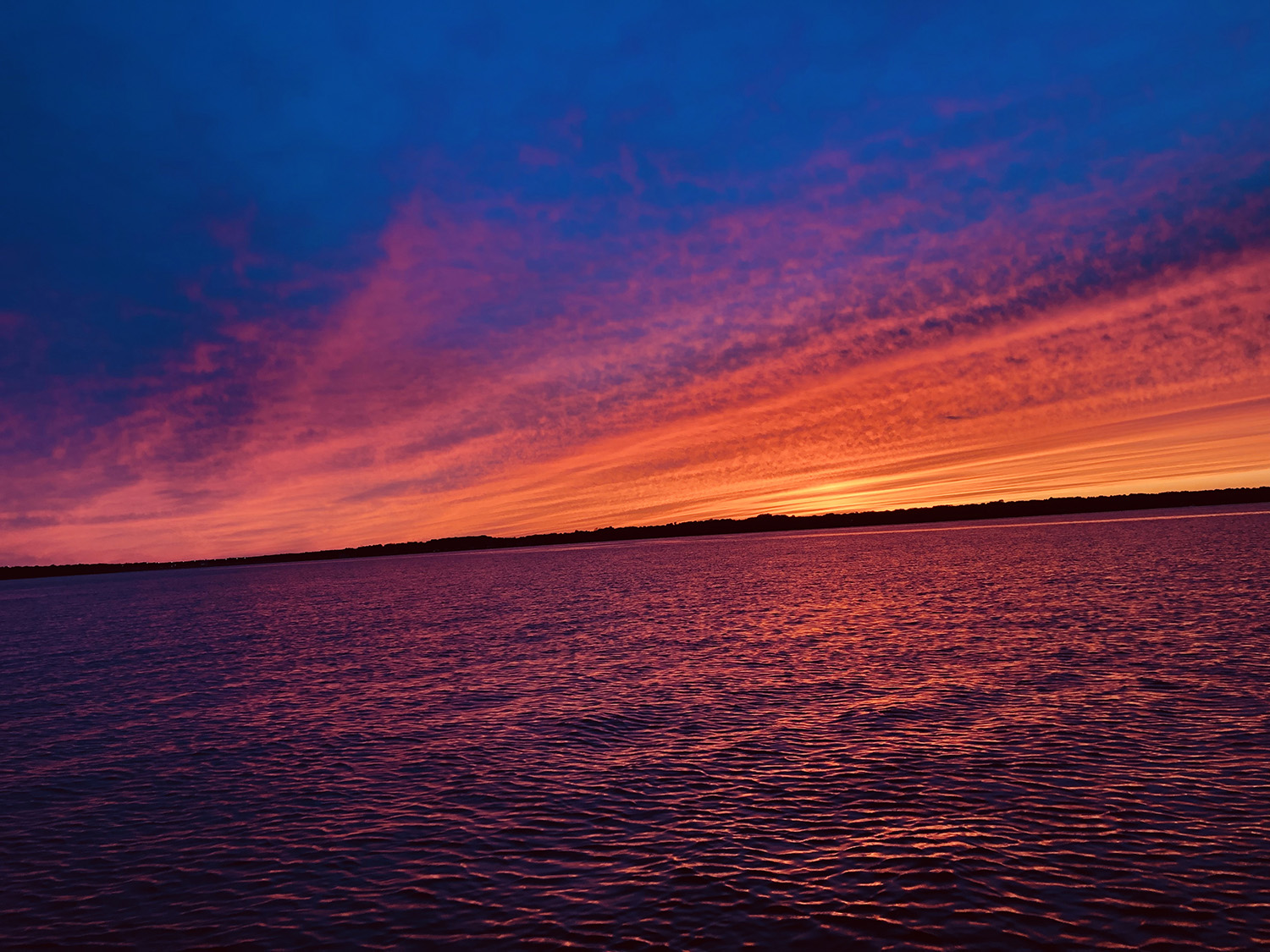 Given my good fortune to meet and often go fishing with so many good people, it’s not uncommon to be out-fished two to one by my host. Those odds can be easily written off to fishing a new spot, being on a new boat, having a bad day at the office, total lack of local intel, etc. What’s really uncommon is to be out-fished seven to one.

Gregg Vespe took me fishing in his sweet Miss Colleen, a Swan Point boat he rebuilt over four years, from the keel up. We fished all around Newport as the sun set and fish rose. Greg is President of the Aquidneck Island Striper Team and long time RI Saltwater Anglers Association member where he sits on their legislative board so naturally, our conversation moved from fish stories to the persistent problem of poaching and the upcoming striped bass regulation changes. 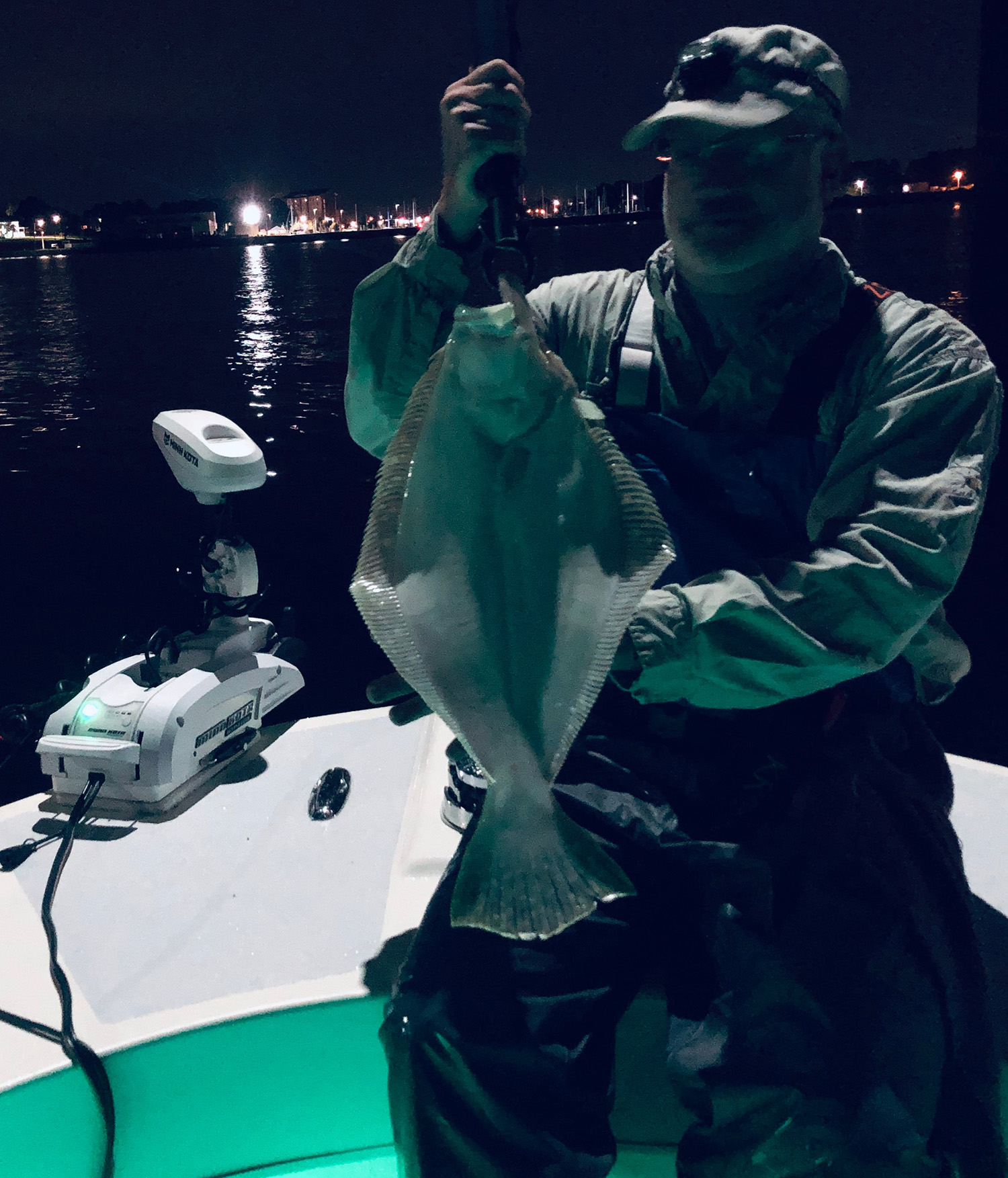 Rhode Island has it’s say in the process of drafting new laws to protect the striper population on September 24 at 6:00 pm at URI’s Corless Auditorium at their Bay Campus in Narragansett. This is the time for all bass fishermen to be heard about the Draft Addendum VI. The proposed changes are available at their website www.asmfc.org/files/PublicInput/StripedBassDraftAddVI_PublicComment_Aug2019.pdf and if you have questions about the meeting or process, you can email nicole.lengyel@dem.ri.gov. If you can’t attend, please read the proposals and send your comments by October 7 to comments@asmfc.org with the subject line Striped Bass Draft Addendum VI. 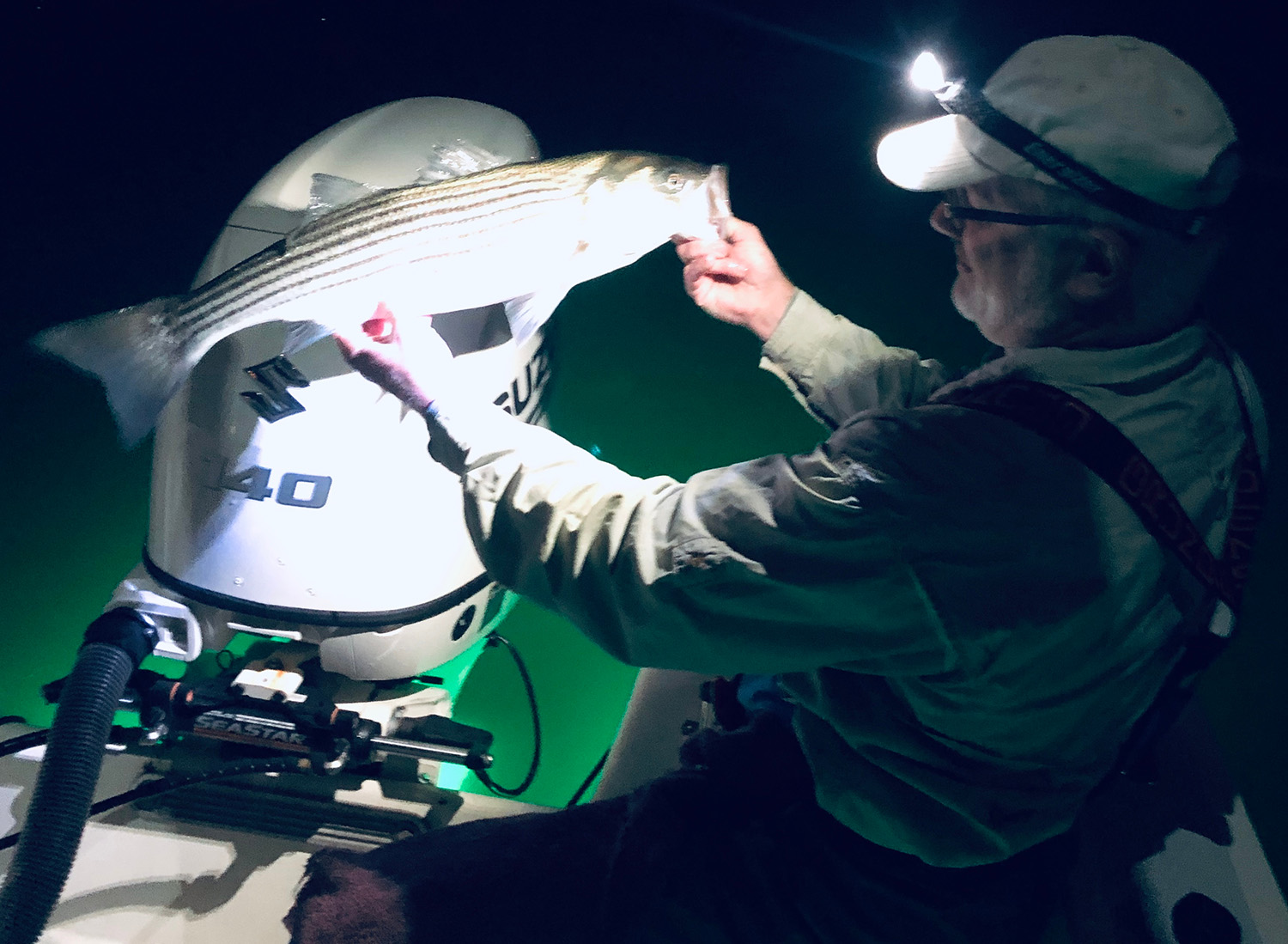 another bad picture of another awesome fish, exactly what Addendum VI serves to protect.

So while all this discussion was happening, Greg caught and released striper after bluefish after scup after fluke. We drifted around some of his regular spots with his Minn Kota Spot-Lock. It held us tight to rock piles and historically productive edges with no sound and incredible accuracy. Technology allowed us to cast and catch without worrying about dragging anchor or even having to deploy one. Fishing from as clean and solid a boat as the Miss Colleen, you don’t want a muddy anchor fouling up the deck anyway.

Casting swimmers to shadow lines and jigging white Bill Hurley plastics in 30’ of incoming tide, Greg landed more than a dozen bass and blues in a few hours. His trophy was a 23” bomber of a fluke which rose hard and did not come easily to the net. As we steamed for home, quick math showed me I had been shown up by a seasoned fisherman and there’s no shame in that.

There was no competition, just friends catching fish on a pretty boat on a perfect night.

Either drifting green crabs beneath a warm sun or casting the shoreline under the slim light of a waning crescent moon, all those magical colors of spring are really intensifying now. Fishing can often be best in those forty-five minute windows around the sun and...
Keep Reading

Allen Hall has passed away, a true Block Island fishermen right to the last