Neither wind nor rain nor anything else

Sitting in a stark white Cape Cod conference room with an impromptu bar on one side and a plate of smoked salmon on the other, Pat was happy to be out of the rain. Fall was delivering a third day of biblical proportion northeast winds. Rain pelted the roof, wind pushed the front glass doors tight to their frames. Pat was there with the WI Women Fish group who had just experienced fishing the Cape Cod Canal in a storm that never relented. And they could not have been happier. 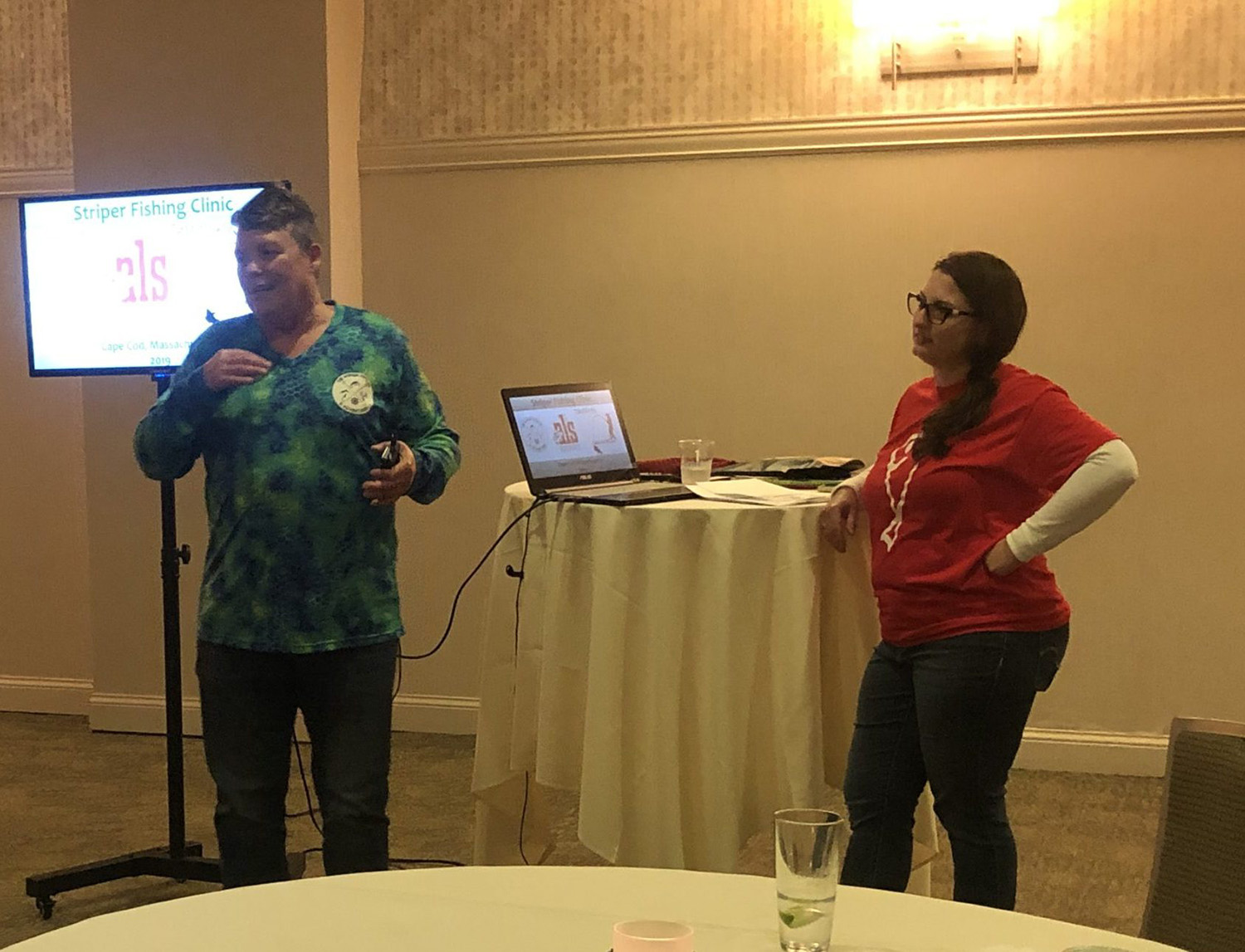 Capt. Barb Carey and Mandy Debuigne get the weekend of rainy fishing started with a few tips

“I came because she was coming,” said Susan Hubert with a chuckle, pointing to Gretchen Carey. Gathered at three tables, they were introducing themselves to their eastern hosts, Mandy and Jeff DeBuigne of Al’s Goldfish Lure Company and one of their guides for a striper fishing weekend, “Lunchbreak” Eddy Stahowiak. They asked questions about finding, fooling, catching and releasing stripers, had a second round of salmon, shared their reasons for flying in from Wisconsin, Minnesota, Tennessee and Boston, then headed for warm, dry hotel rooms. What no one asked about was whether they’d still be fishing the next day if the weather didn’t improve. Fishing starts early, no matter what the weather. Good stock, those mid-westerners.
“There’s no such thing as bad weather, just bad clothing,” said someone wise. At 7:00 a.m., the next morning, 14 women rallied in a Menauhant Beach parking lot in the process of being sandblasted by 20-25 knot winds. The long south facing beach seemed fishy but it was hard to tell in all that wind. A small river inlet to Bournes Pond offered some shelter from the storm, but not much. They loaded up ten foot Daiwa Emcast rods paired with Daiwa BG4500 reels, Z-Man plastics and Al’s Goldfish Saltwater Series spoons. Wind rolled donuts rolled across tailgates, tipped over tackle bags, blew hats off and filled everything with sand. Anglers worked the beach for a few hours, chased a few flocks of birds and finally caught one 24” striper on the leeward side of the bridge connecting pond and sea.

Vicki Jung outsmarted a few keeper blue crabs with bank sinker and double hook mackerel rig then added the appetizers to her bucket.
“I got you all five gallon buckets but they’re not five gallon buckets,” Barb Carey said with a smile. Barb was outfitting them for a scheduled charter boat trip to catch black sea bass the next day.
Barb is impressive.
She’s a fishing and media powerhouse who, along with Angie Scott, made the adventures possible. She’s the founder and President of WI Women Fish, a USCG Captain, producer of the Women Ice Angler Project, co-host of The Woman Angler and Adventurer podcast and one hell of a fisherwoman. Barb agreed it was time for a move so they headed to Trunk River. The weather hadn’t eased one bit.
As soon as it stopped raining, it started again. This is when it was clear there was something different about this group. Taking people fishing doesn’t make them fishermen or even people who understand fishing and what it requires of you. Taking people fishing when the fishing doesn’t cooperate can be difficult as guides try to keep their sports in the game but this group, well, they were already fishermen. And I don’t know why that word has a male gender to it or why “fisherwoman” sounds kind of clunky but that’s what they were. No one shrugged or stared at their feet or had that look of gloom that meant energy necessary to find fish had to be directed to cheerleading a group of soggy visitors who had so far only seen wet donuts and one fish. Their anxious looks came from wanting to get to a fishier spot with little concern for a little rain. How fantastic is that?

From the Trunk River parking lot, we cold see birds circling pretty much as far away as you might imagine on a day when it was rough just walking in all that wind and rain. Susan led the beach charge westward towards a spiraling, diving flock of black-tipped gulls and cormorants. Peanut bunker, sparkling in no sun, were being slammed right tight to a beach awash with heavy sandy red weed. Stripers were exploding out of the sea, advancing with great speed, inhaling bunker en masse, throwing them up against the seaweed wall and onto the shins of the other surfcasters. In the shadow of a Private Beach sign, she made a perfect cast.

Have you ever seen a happier face?

It was chaos on the beach, almost deafening with the wind, screaming birds and cheering anglers. Stepping back from piles of rolling stones, Susan reeled in a beautiful 30” striper. It was pure joy and salt in her eyes as everyone ran to her, taking pictures and cheering to her success in such rough conditions. When everyone had a picture, Susan knelt down, held that bass carefully by the tail in the surf until its strength had returned, and let her go.
The birds moved away, the wind came back and all 14 trudged back to the parking lot. Not to call it a day, but to see what beach was next.
“Eat the lobster,” Eddy said, resting on a wet Toyota Tacoma tailgate, watching water drip off his Al’s hat, sipping from a can of Maine beer, reflecting on why we fish at all. Eat the lobster because life is short, because 14 very cool women flew across the country to fish, because they had the right clothes and attitudes to push back against a Nor’ Easter and catch pile of bass from the beach.
“Up to Megansett Beach,” Eddy said, rallying the crowd. “There’s a river there and some sandbars.” He had intel. His friends had been catching there. The ladies took off waders and turned on wipers. Those mid-western women anglers were tough as beach grass, knew how to catch fish and didn’t let any weather dampen their trip east.
“I could fish 24 hours a day,” Pat had said back at the hotel. Rain be damned, so could the rest of WI Women Fish.