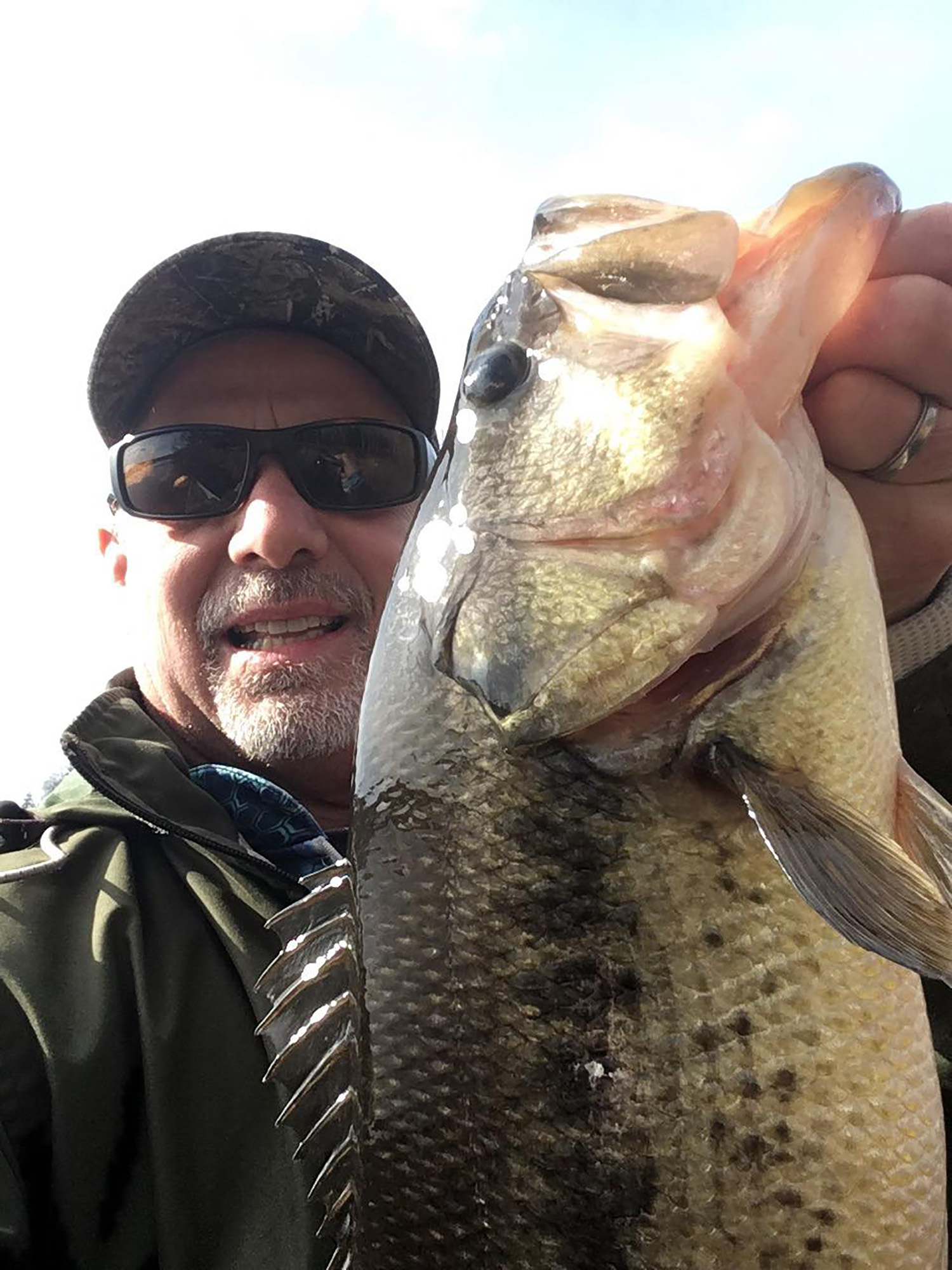 Bob does find those fish

Bob Buscher has done it. Numbers don’t lie, Bob Buscher is the best of the best.

With just a few weeks before we start new fishing calendars, he finished his journey. South County Rhode Island’s favorite fisherman and media star has at last caught and released one thousand pounds of largemouth bass this year.

What a journey it was.

We started covering Bob back when the idea of catching and releasing a thousand pounds was in its infancy. Snow still covered the ground when we noted that, “Winter fishing is more fun with a friend like Bob who understands where fish hunt in cold water, how to choose the right bait and how to stay safe catching them.” That brief encounter opened the door to a year-long odyssey following Bob around the state to reach his goal and all of it was amazing. 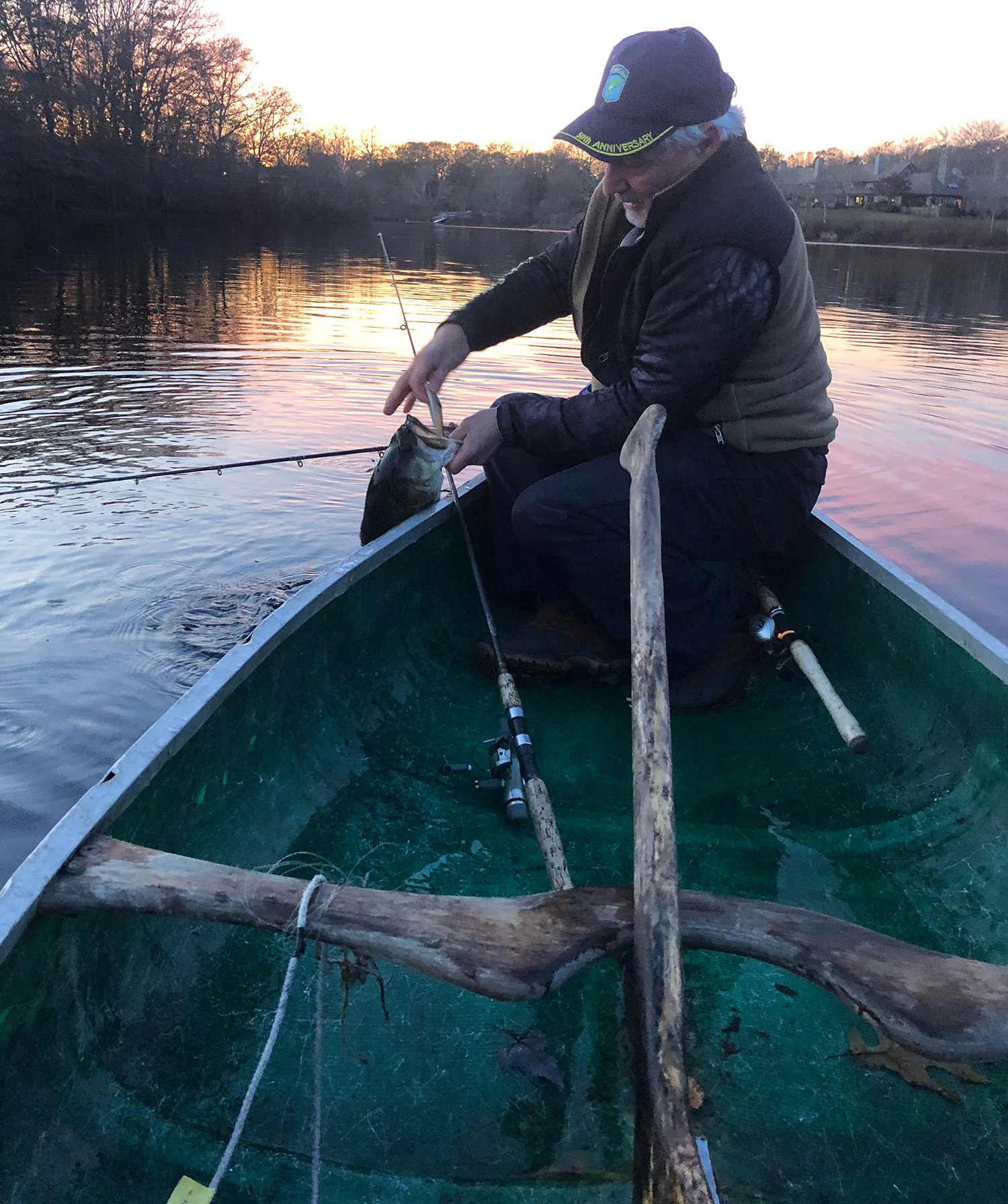 Hauling in one more towards one thousand pounds 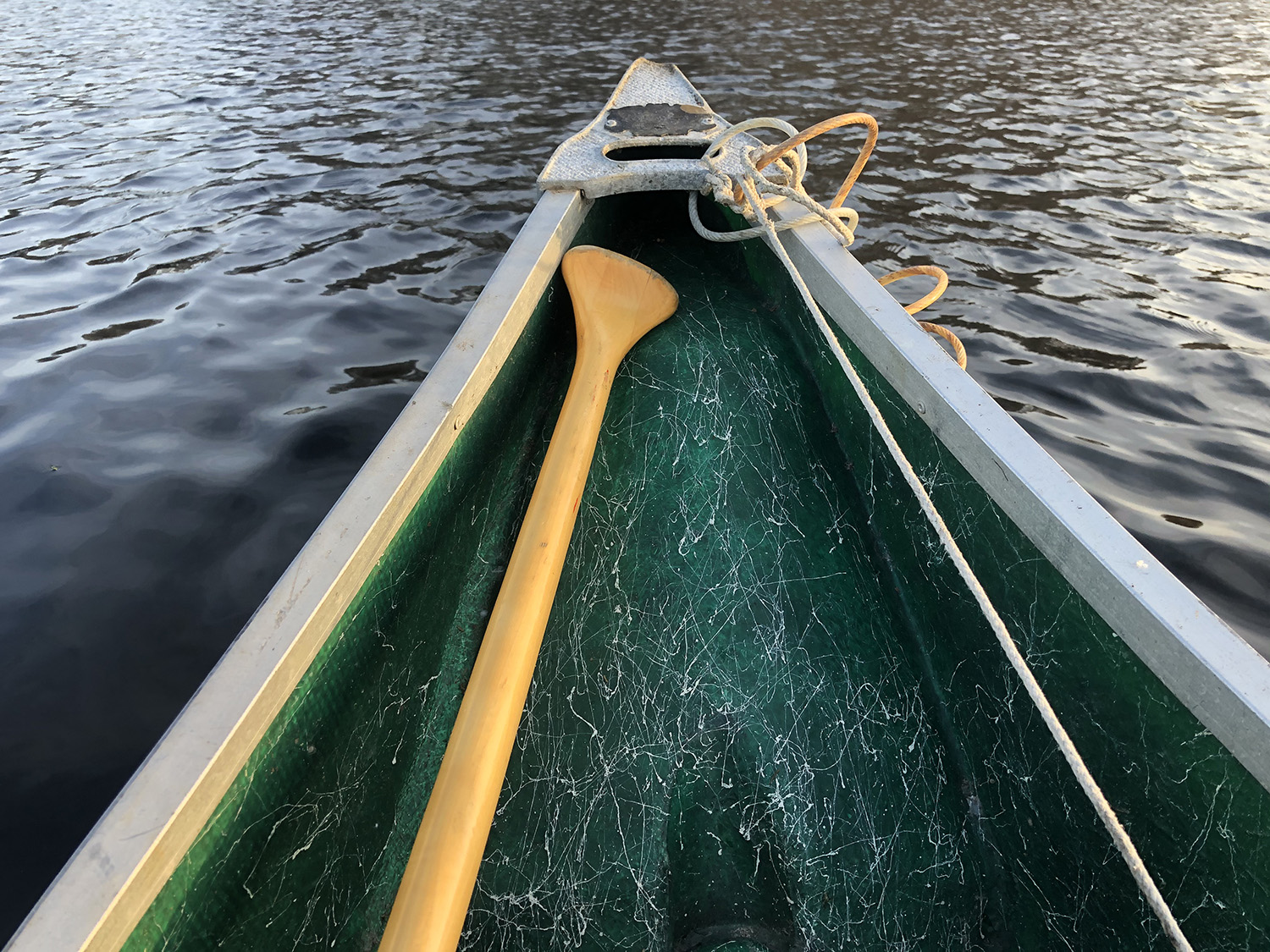 todd corayer pic from the bow of Bob’s old canoe

“On a good year, Bob fishes about four days a week; some years he’s out there two hundred days,” we wrote back in the Spring. His first interview helped readers understand how a New York transplant and URI student realized this state, if you looked past the usual political foolishness, could be amazing for sportsmen and women. Growing up in New York he, “learned how to fish by drifting an earthworm down the stream with small hooks and a light drift.” A simple start to a lifetime on the water. Later, his parents bought a place upstate, near a creek that fed the Esopus River, famed for its cold pools and fly fishing. “I came to Rhode Island and the streams were like swamps, there was no edge, they just flowed through the woods.” He adapted, settled down and started catching fish. He kept records all the while. In late Spring we noted that, “Bob hasn’t missed a cold water beat, bringing aboard the largemouth in quick succession. His mastery is not just persistence but understanding what fish are targeting. He’s another ace we’ll certainly hear more from in the very near future.”

Through the four seasons we’ve chronicled him as he paddled his leaky canoe or motored his sweet Tracker through the best and often hidden ponds and lakes. A month or so later he was back on the front page: “On the freshwater side, South County’s Bob Buscher has already caught and released more than four hundred pounds of largemouth bass this year. That’s amazing. He’s an ace when bass are hard to find, on their beds or moving around late summer ponds searching for cool waters and regular meals.”

As the seasons changed, Bob kept at it, racking up the catches and trying new ponds. We touted his belief in balance, noting that his catches were, “nothing shy of amazing, considering there’s the family, kids, the day job; all that seems to fall in line with his fishing quest. He stays focused in a world where people walk into light pole staring at their phones, fall off cliffs taking selfies and cradle their phones in upright palms, just waiting for someone to call. So meanwhile, Bob Buscher is on the bow of his Tracker, happy as a clam at high tide, catching and releasing.”

Bob’s been a focal point on Fish Wrap’s daily radio reports from here to New York and was featured several times on our television reports on ABC6 because his story was just that good.

The world around us was boiling over but in the midst, or should we say mist of it, Bob was out there, catching and releasing, keeping score, catching more. Without getting out the tissues, the guy is an inspiration. There are plenty of days when there’s too much of this or that to get out a paddle but Bob does. And speaking of paddles, Bob could use a few. His canoes are, well, shaky, leaky, creaky and very reliant on Duct tape. His paddles are rough, worn and should be hung in the Peace Dale Museum of Art and Culture. 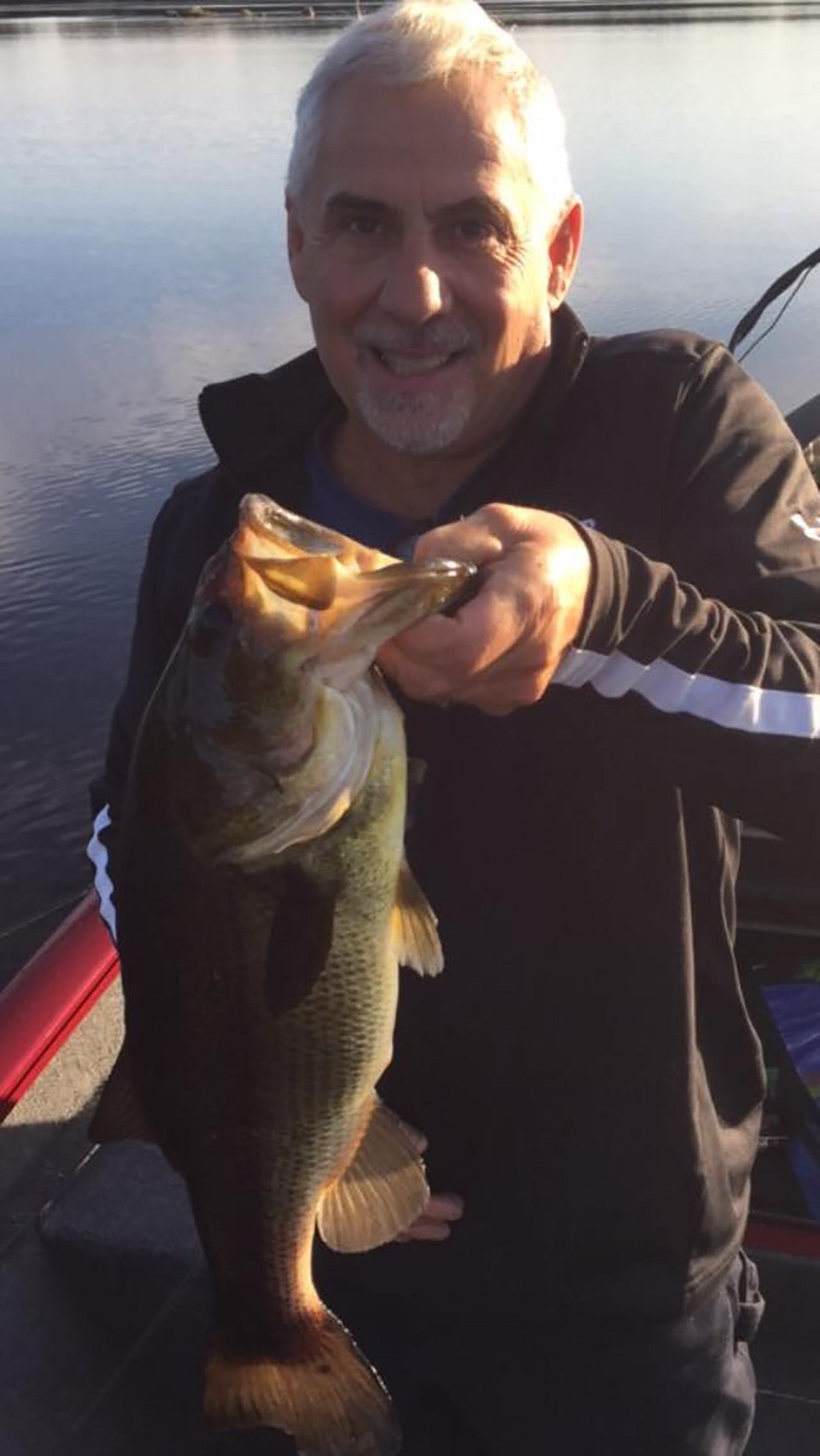 His wife Kristen has supported Bob all the way, with a smile. It’s the best love story. Boy meets girl, boy goes fishing (alot), girl has to hear about all the fish he caught. Chalk one up for two of the best people; one doing what he loves while the other loves him for his passion.

Then came the afternoon before Thanksgiving. Fishing with David Smith, Bob was looking for that last two pounds which had eluded us the week before on Hundred Acre Pond. He had three bites in an hour but bass were feeding without holding onto the baits. David caught one. Personal pressure mounted. Bob reached for a reliable rig, a black and red grub on a ⅛ ounce jig head. Fish did not come easily as darkness overtook them on a very top secret pond, but finally there it was, a two pounder which put Bob exactly at 1000 pounds for the year.

Congratulations Bob Buscher, you made our year better following your mission, your belief in catch and release, amazing depth of knowledge and perseverance while balancing family and fun with as much time in a boat as you could manage.

Your drive, passion and smile are an inspiration to us all.

A tip of the camo hat to you sir and here’s to whatever adventure drives you in 2020.

The R.I. Department of Environmental Management is proposing to incrementally increase fishing and hunting licenses and tag fees over the next eight years. These increases are listed in Article 7 as part of House Bill 7171, Relating to the Environment. Before anyone...
Keep Reading

Fishing contests don’t make front page news in an age of scandals, accusations and reverse fake news. “Where you gonna run to when the world’s on fire?” asked Woodie Guthrie in his prophetic song, “Sowing on The Mountain.” While a country in turmoil reposes in front...
Keep Reading

The Spring striper migration has begun and from the doldrums of winter we quickly move to a packed spring calendar. Bass are really feeding in the salt ponds and rivers as water temperatures begin to march upwards. Avid fisherman Greg Sansone was in Maryland for a...
Keep Reading

This week we meet two fishermen who have never met but have remarkable similarities. R.J. is a Providence high school student and Jon Fallow is a Brockton middle school teacher; together they show how fishing can erase backgrounds, ease differences and bring peace....
Keep Reading