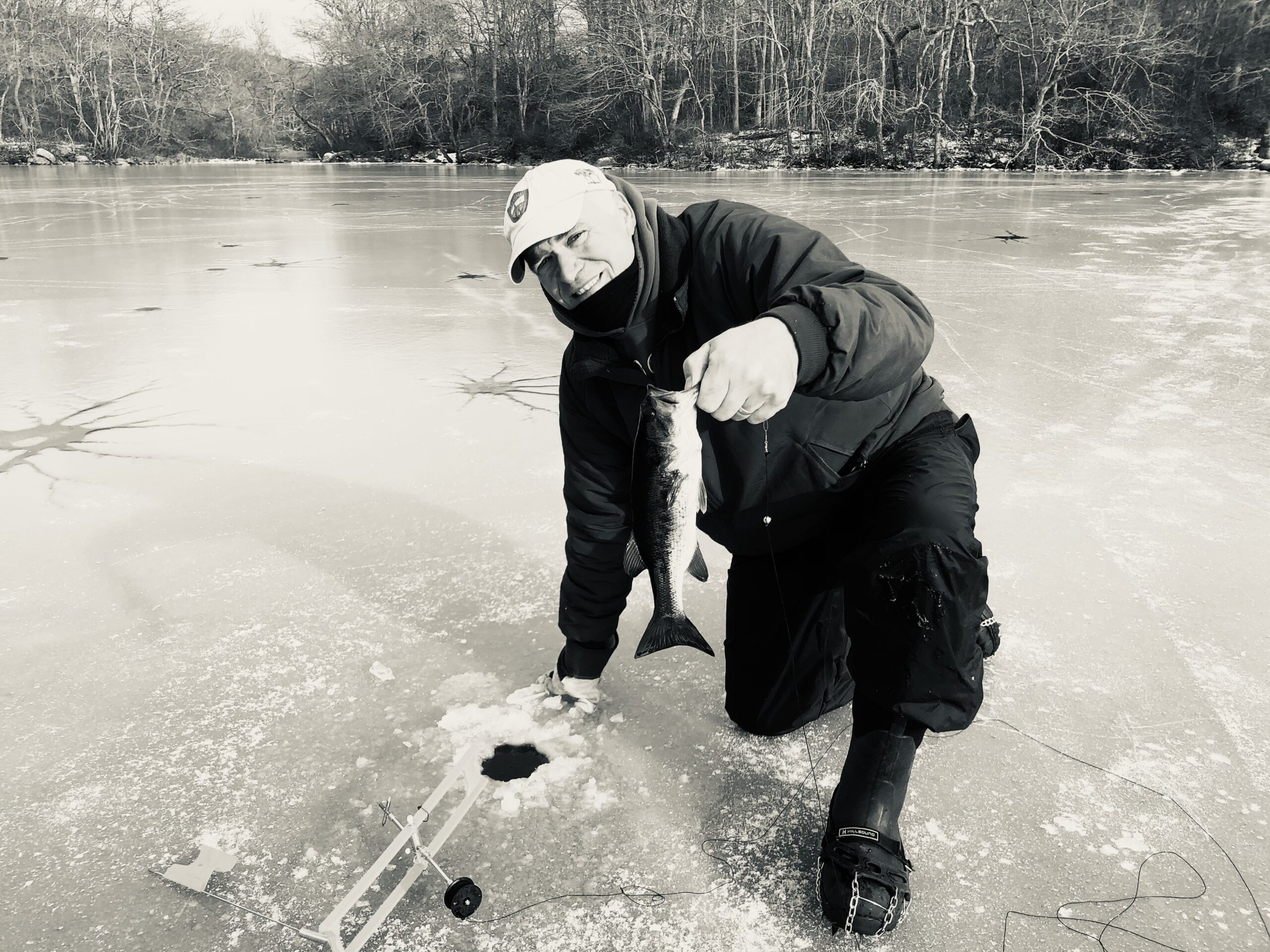 Finally, the start of February and we’ve had a our first shots of ice thick enough time to drill holes in and set up our tip ups. Hard to believe, really. Global warming, sagging airstreams sagging, warming oceans turning high snow clouds to low rain showers; whatever the cause or suggestion, winter sure ain’t what it used to be. Nonetheless, we had ice and fishermen got to it.

Graham King with a nice largemouth

Graham King puts his time on the water and was just rewarded with a big largemouth. “I caught that bass on a tip up baited with a shiner” he said. “I had just rebaited and reset the tip up and was about to run to the car to grab my coffee and snacks. I did one quick check before I got off the ice and saw the flag was up. I estimate the fish to be about 5 pounds and about 22-24 inches long.” How cool is that? Mmmm, snacks. 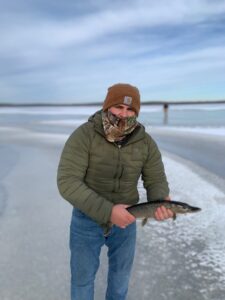 Narragansett’s Stephen Thomas fished Rhode Island’s largest lake to find a pretty Northern pike through the ice. He’s a member of RI Ice Fishing so he asked them where ice was as good as the bite.  With medium sized shiners from Hope Valley Bait and Tackle, his crew set up camp some 200 yards off the Worden Pond boat ramp and, “To our surprise, when we started drilling it was six inches thick. It was about five feet from where we were so we set our tip up baits between two and four feet deep. We then set up a couple jigging holes with some vertical jigs,” Stephen said. Worden is a bit of an anomaly, since it’s over 1000 acres big and only about six feet deep, at most. Some people use circle hooks with chunks of stinky saltwater baits but Stephen went for lures. “I’ve found that green lures work well in Worden over the years. In about two hours we had caught two Northern pike, two chain pickerel and one perch.” Keep in mind, it’s been colder than pushups in the snow so cheers to Stephen and his friends for finding some tip up time and catching so many fish on a cold winter’s day.

Four inches of ice will support a few folks skating or drilling holes but if you plan to run a snow machine across the ice for some late season donuts around the pond, you need at least, and we do mean at least, five inches. Ice thickness can vary across a pond, especially where there is structure, springs or sunken trees. South County retiree Bill McCusker relies on a cordless drill to sink test holes here and there as a way of gauging average ice depth before setting up his tip ups. If you want to feel like you’re in northern Maine, you absolutely need at least ten inches of solid ice to support a vehicle. Keep your windows down while travelling to your favorite spot or setting up camp. That makes things easier to hear ice cracking below you or to jump out of things go south. And it’s easier for divers to retrieve your insurance card from the glovebox. 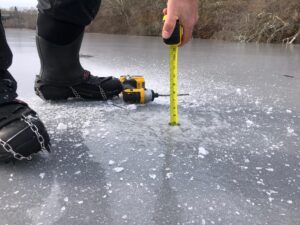 For a good day on the ice, pack an ice chipper since chances are good your gas powered one hasn’t been run since last year and won’t start, a skimmer to collect your shiners since sticking a hand in ice water is a lesson learned after one exercise and a pair of cleats for your boots since falling on your head just after dragging your sled full of gear three hundred yards across a frozen pond will ruin your day. And yes, you should use a sled. Those pack baskets look great full of tip ups but whatever you need will always be on the bottom, so you’ll take every single thing out first to find your one hand warmer that expired last winter. 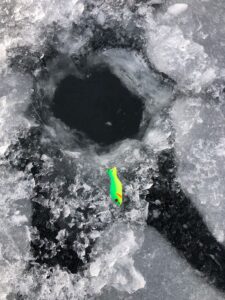 Jigging up largemouth and perch with an Al’s Goldfish

If all this talk of winter, snow tip up time and ice is not your cup of tea, we appreciate you reading this far and will reward you with RIDEM’s notice that they are accepting reservations for Burlingame State Park, with some reservations of course.

“DEM will be re-opening 13 camping sites at Burlingame that were previously closed to campers due to the public health pandemic.” That’s a start. It will be open for camping for tents only. No towed trailers, no fifth wheel behemoths with glaring flat screens, powered awnings, double captain chairs and enough below deck storage for owners to search and clamor their way through every compartment, looking for a bag of B.S.  rainforest destroying barbeque briquettes while the rest of the campsites settle into appreciating a potential for peace and quiet. What a wonderful, unexpected positive of this COVID nightmare: campers sleeping in tents, mystified by crackling fires, warmed by actual sleeping bags, discovering those small tears which no-see-ums always find and weak spots where the rain trickles onto the tent floor.

But then, camping around Watchaug Pond has been adjusted. Three cabins, according to RIDEM,  have been “relocated to ensure that all campers have convenient access to the shoreline.” Swimming is prohibited in this portion. The beach will serve as a kayak and canoe launch, fishing area, and a sandy spot to relax near the water. Pets may enter the water from this shoreline but must remain on a leash as required in the Campground’s pet policy. A few parking spots will be added in this area for the convenience of campers. Oh, for %#C!&’s sake, don’t we go camping largely to get away from other people? Now cabins are too close? This is such a strange, new world but it’s good to know our Arlo T. Dog can go for a swim as far as his two foot leash will allow.

And fair warning, DEM has also decided that because of that previously mentioned annoyance, Charlestown’s East Beach campground will be shuttered for 2021. The joint has 20 campsites, which would be reduced to ten because of the whole mask wearing deal and since people from away scoop them up like wildfire while swampers are still out on the ice looking for big northern pike with chunks of pogies frozen last June, the numbers don’t work for staffing and maintaining port-a-jons.  Hopefully, and how often can we say that, things will return to normal next year and all those folks from Connecticut can reserve all 20 spots for the summer while swampers are still on the ice catching big fish, like Stephen Thomas. 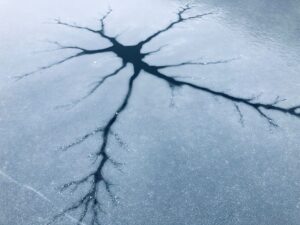 Just now, we take a look back at a piece written for the Southern RI Newspaper family which, due to reasons real and uninteresting, was lost for a while. Time passes quickly in this digital age but I say taking a few minutes to read about good friends catching fish or...
Keep Reading

Rivers once ran silver with shad, herring, sturgeon and stripers; now there are calls to rebuild rivers and populations for the abundance our ancestors enjoyed and took for granted. This week, learn how we can turn the tide to support forage fishes and native brook trout.

Just a few words, just a few hours on a salt pond

You start here, west of the gut, heading for a low sun. Things change in a flash. For the better. Fish retreat from the shallows. Some things start to stir, some. Swirls appear. Wings flap. Still the air is still. So you round the corner, more to the east, more to all...
Keep Reading