This week we migrate from shallow rivers to deep waters. River herring migrating up South County’s Saugatucket River have run into some dam politics.  The RIDEM fish ladder at the Palisades Mill, currently owned by Eric Thunberg, moves water too rapidly for most alewives on their search for calm Saugatucket Pond and Indian Lake waters. For many years, volunteers and students moved fish in long nets from a deep pool below the ladder then efficiently shuttled them around water rushing over wooden baffles, ensuring some safe passage but once again, herring hit a dam wall. In the midst of welcome strong returning runs of herring, which are subject to environmental conditions and nets dragging for sea herring, Thunberg has cancelled public “lifts” for liability concerns.

“This is the weakest link in the run,” Bill McCusker said, pointing to quick, brown water in the Palisades raceway. Under the direction of the passionate Bill McWha, who is no longer involved with the river, fish first were helped past a failing Post Road dam, which has since been reconstructed and works very well. As fish moved up river, volunteers moved to Palisades to move fish again as they piled up by the thousands.  A new organization is now sanctioned by the state to assist the fish, The River Herring Collective. Paul Clappin is heading the Collective and is working closely with RIDEM and Mr. Thunberg to find some middle ground. Thankfully, some fish are summiting as McCusker has noted with his amazing video on the Friends of the Saugatucket River Facebook page.

Lifting, carefully and efficiently at the Palisades Mill in South Kingstown, RI

“He’s definitely trying to negotiate with us. He’s concerned about the liability,” Clappin said. In this overly litigious world, devoid of judges admonishing litigants for poor decisions as opposed to doling out cash settlements at the expense of landowners, Thunberg has every right to be cautious. Having a swirling run of fish below a large group of good folks gawking over a leaning Colonial-era wall has potential for slip and fall situations but for many years, operations went quite smoothly.

“Our hope is that we’re going to come to a satisfactory resolution,” Clappin said. Meanwhile, the clock is ticking. Buckies arrived with the March moon and will only try so many times before they leave on an outgoing tide without having ensured their next generation. That surely weighs Mr. Clappin’s mind s as it hopefully does on Mr. Thunberg’s. Standing in the shadow of Rowland Hazard’s sprawling brick and granite textile mill, dark fins slice through whitewater for a few moments before tumbling back down to an eddy filled with hundreds more. As that natural clock ticks ahead, hopefully men and fish don’t tire of trying; it would be a shame to accept that after two centuries of impeding fish passage in the name of textiles and progress, that maybe we still haven’t learned a dam thing.

One hundred turbines is a lot of structure to navigate around, especially in a sea. Or thick fog. Or if you’re posting an epic shot to your social media account of a Mahi you just landed. Wind farms are being licensed in offshore “energy zones” and their continued development has much momentum as regulators and NGO’s search for fossil fuel alternatives. One problem is, we’re not used to seeing towers out there so we’ll need to learn to fish and steam around and through them. To help with this learning curve, Ørsted, a Danish energy corporation which negotiated offshore lease agreements in several locations from Virginia to Massachusetts, has developed a simulator to help mariners and anglers experience a wind farm in real time. 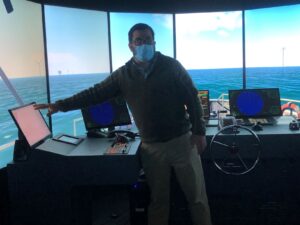 Located at the US Maritime Resource Center in Middletown, the simulator includes a full console of electronics and controls with a 180° view of the bow and a wide view of a ships stern. Brian Holden, Chairman and President of the USMRC, and his team created software which includes 97 meter blades slowly rotating as you approach in either a 34’ Contender-style center console or an 80’ commercial dragger with a net drum to the stern. Every detail, from turbine heights, paint schemes, Coast Guard mandated lighting and aerial lighting have been coded into the software. 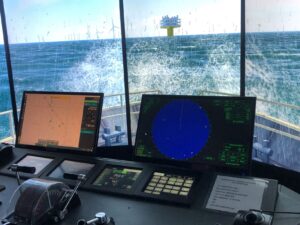 From the next room, Holden can manipulate wave heights, wind speeds and direction and currents. He can also steam through your screen with another center console or giant Navy destroyer, just to keep things interesting. When you turn the ships wheel hard to port, it’s common for other people in the room to lean to starboard. It’s that real. Based Ørsted’s lease just east of Block Island named Revolution Wind, turbines are designed to produce approximately 400 megawatts of power to Rhode Island and 304 megawatts to Connecticut.  Standing at the helm, dialing in a host of electronics, taking your position from Coast Guard electronic charts with overlaid turbines, looking up at a screen showing rudder angle, gyro and magnetic headings, wind and speed over water, it’s easy to lose your balance as the ship rises and falls with the demands of a strong afternoon SW breeze and a pushy following sea.

While the Block Island Wind Farm is accessible to many boaters, new leases are farther from the beach and just may turn out to be Mahi factories as all that structure builds up some productive bottom, drawing in more fish. They also may be out of range for many seasonal recreational fishermen and women. That remains to be seen but Ørsted’s Fisheries Relations Manager, Ross Pearsall, is encouraging groups of boaters and commercial or recreational fishermen to try the simulator. If you anticipate being offshore, it’s an experience you should not miss, especially if you want to understand how a hundred tiny radar targets will affect your heading, especially in a fog. You can reach Ross at ROSPE@orsted.com.

Crazy Albert and catching two rainbows with one cast

Dock talk is still all about big bass keeping to themselves at the top of Narragansett Bay. South coast fishermen are finding piles of schoolie salt pond stripers but few keepers. Cinder worms have made only fleeting appearances while sand worms appear to be...
Keep Reading

This month we have long days and warm nights to fish but by month’s end, we should take a night off from the beach and learn to catch more fish in Narragansett Bay. The Rhode Island Saltwater Anglers Association will present seasoned and generous fisherman, Greg...
Keep Reading