Walleyes Through 40” of Minnesota Ice 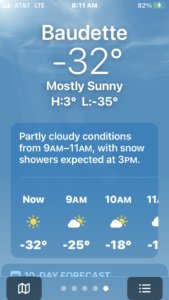 At daybreak, it was -32°. A rude northwest wind pushed that to -42°. Gathered at Lake of the Woods, one of the most storied freshwater lakes in the world, with the Association of Great Lakes Outdoor Writers for Ice Camp 2022, we were fishing for walleyes through 40” of Minnesota ice as well as sauger and Northern pike. Winter in northern Minnesota, the Walleye Capital of the World, is no place for surprises or equipment fails so we relied on propane-warmed ice houses from River Bend Resorts in Baudette, St. Croix ice rods and Maine’s own Al’s Goldfish Lure Company ice jigs.

Beginning a nine mile drive over the lake, Joe Henry dropped his Toyota into four wheel, looked right and said, “Please unhook your seatbelt.” I understood his concern for unplanned exits.

“It sounds like a jet engine,” Minnesotan Tom Peterson laughed, after our first night. A beast of a furnace endlessly fought against a tenacious cold which froze everything, including our door handle. On the inside. With Lure Love podcast host, Tim “Tacklebox” Bete and Karen Lutto, CEO of Hunter Outdoor Communications, we endured surreal blasts of artic wind that froze my beard before we could reach the truck to begin our ice road journey. 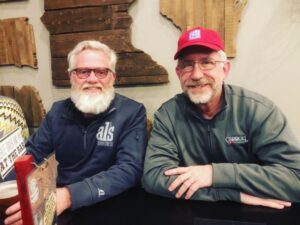 With Tim Bete to my left, everything went right

To fish Lake of the Woods in winter, you traverse a rough, serpentine, heaving twenty mile path, clear here, drifted high over there. Privately maintained in portions, it demands patience and will easily fold reckless plow trucks into awkward, twisted snow sculptures.

At forty below, it’s life as usual at Lake of the Woods

“Fishing is not a pastime in Minnesota, it’s a culture,” said Joe Henry, Ex. Director of Lake of the Woods’ Tourism Council. Split by the Canadian border, Rainy Lake feeds Rainy River which drains into the one million acre lake then into the northern most area of the contiguous United States, the Northwest Angle Inlet. More than ten million walleye feed just above the lake’s soft bottom, annually entering the river to spawn, leaving then entering again to prey on shiners. Saugers, perch, smallmouth, sturgeon and massive Northern pike all thrive in her bait-rich ecosystem. 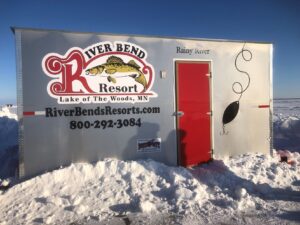 So cold outside yet so warm inside

Minnesota winters are humbling. First orders of business are to turn ice house heaters up to eleven, choose two holes, one for jigging, one for dead sticking, then slowly shed layers. Ice houses, like people, will freeze tight if left unattended, where they’ll stay until Spring unhinges Winter or someone tugs on it so hard they quickly tear off an entire side. 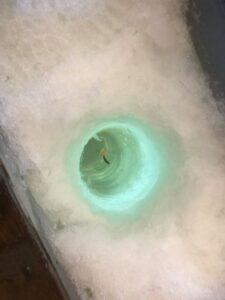 Guides like Alex Peterson tow them to follow fish constantly on the move, often every few days. Even when tightly latched, door thresholds scheme with the elements to amass mini glaciers, forcing them open over time, preventing their closing until chippers are employed. That first porta john expedition reminds the even the hardiest New Englander how thirty below feels howling across 20 miles of icy, desert white scape. 4,000 people live in LOW county yet on an average winter day, more than 4,000 anglers are on the ice and spend 2.7 million hours fishing annually. “It’s not about one boat in a driveway, it’s how many boats they have,” Joe said with a smile. 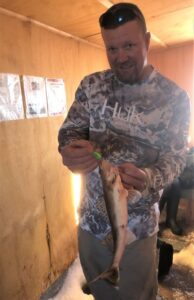 Saugers were coming quickly on the Al’s Goldfish ice jigs

Every color works as long as it’s gold

Always the consummate host, Joe chose his spot last, setting up a Vexilar for better views. Bottom feeders have limited visibility in naturally tannin stained waters, even at it deepest spots of about 38’, so it’s a daytime bite. To his right, St. Croix’s Savannah Stenlund equipped us with several models of ice rods, including a top secret model not officially available until September, 2022. On the same bench, Brian Bashore of The Walleye Guys, fired up his Humminbird 197 to watch fish approach, consider attacking or snubbing our house’s offerings then cheered as we hauled back. Since 90% of fish are caught one to two feet off the bottom, I set up a 3/16 ounce Al’s Goldfish Copper Glow ice jig tipped with a minnow, suspended at 29’ with a St. Croix Custom Ice C132MLF. The jigging Skandic Ice SKA328M was set up with a White Pink Glow Al’s 49er, also with a minnow. 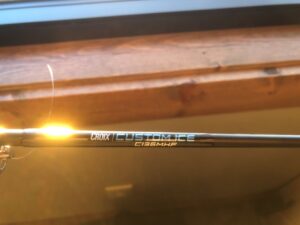 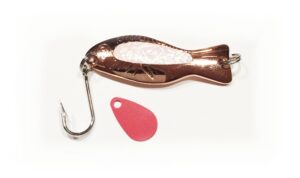 Look at that copper shine!

The first walleye came quickly and was a keeper. Tim made mental notes for his podcast between hauling in walleye, tullibee and saugers on a green-lime 49er jig. A deadsticked Al’s Copper Glow ice jig tipped with a small minnow performed very well, even if left to sit for up to an hour on a Tundra rod, which was sensitive enough to signal every tiny tap on the jig or minnow then had enough backbone to pull an uncooperative walleye all the way.

We learned the intricacies of landing walleye in extreme conditions, how fish pass through in waves, how to ensure shorts find their way back down safely and how every color works as long as it’s gold. With their 22 karat gold finish, Al’s Goldfish were perfectly effective for stained waters with the 49er offering an attractive flutter on the drop, which seemed to be when solid hits happened. “Every time a minnow moves, the Al’s makes it shine,” said Tom. Some forty fish later, with a few saved for supper, we drove for home with the sun above a distant horizon.

Minnesota teaches people how to be tough

Nine miles out is no place to navigate an ice road in darkness or risk a night without absolute protection from elements which will heartlessly consume you. We also learned to reconsider a second porta john expedition. 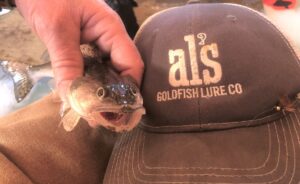 Al’s and saugers, so much fun

“They are always catching somewhere,” Joe Henry chuckled. It takes time to acclimate to frozen everything at negative something you’ve never experienced, but clearly Lake of the Woods is special. 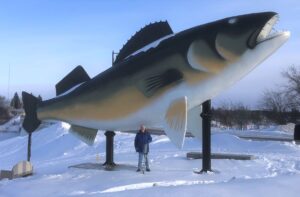 From that 5000 pound Willie the Walleye statue on Route 11 to a jet engine keeping cold at bay, a cozy and deep cabin nap, a handsome green St. Croix rod, a killer fish dinner after River Bend Resort cooks your catch and a glimmering Al’s Goldfish jig fluttering through three feet of naturally lit ice; all that makes waking up to -32° worth every layer.

so much to see in the land of lakes and woods

With some help from all of us, Gabe’s got this

We’ve got a boat to build. Fishing surely is a top priority right now because this is our high season but it’s also the right time to meet ten year old Gabe Littlefield. Gabe’s a cool kid with a cool Dad who takes his kids and lots of people fishing. Gabe has...
Keep Reading

We were lucky enough to try out a new Hobie Mirage Compass kayak in pursuit of false albacore on the south shore of Cape Cod. The weather was touch and go but the fish were feeding and to make things even more interesting, the water boiled with King mackerel. What a...
Keep Reading

Well, we're big fans of the Narragansett Surfcasters fishing club so here's a little more notice of their Surf Day Used Tackle Sale on February 9, 2019 You can rent a table to sell off some gear or just walk the isles to pick out some new stuff on a very cool winter...
Keep Reading

You can learn a lot from 6″ of water

Always an outdoors column on the move, this week we go electroshocking catfish in Attleboro, Ma., find out how much you can learn by looking into a five gallon bucket and enjoy a quick discussion on Napoleon's wallpaper. Seriously. It’s difficult to connect an ankle...
Keep Reading