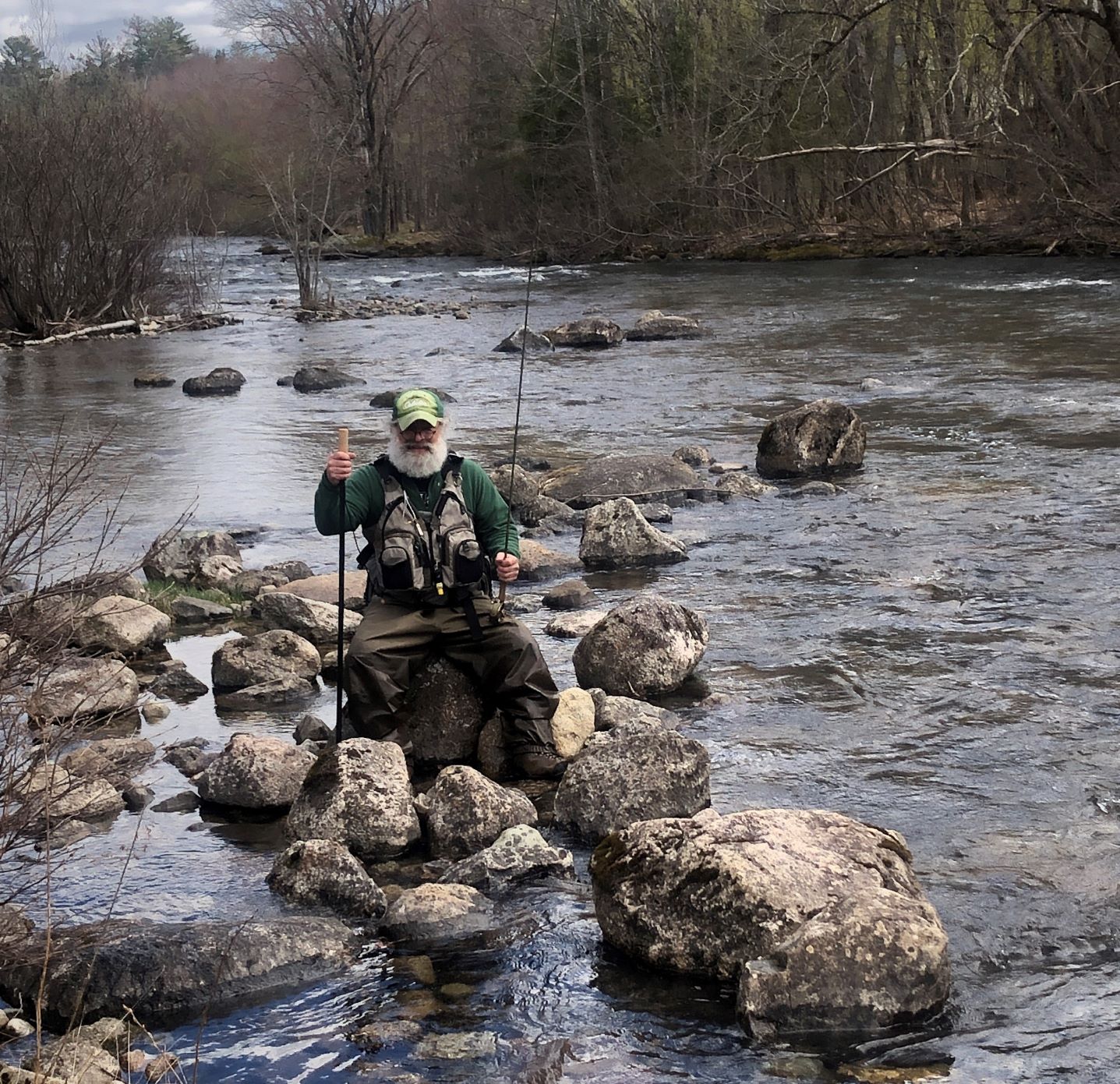 Writing a fishing column requires lots of time looking to the water but not out the window, lest you see how much fun everyone else is having catching actual fish. In spite of this and my editor’s looming deadline, four of us waded into the Salmon River last week, a fast moving tributary of Lake Ontario, known for Pacific salmon, steelhead trout and fast rising waters. Pushed at the knees by a 350 cfm flow and the occasional decaying 20 pound king salmon zombie, we worked a long stretch of the Douglaston Salmon Run, where rain made the catching difficult, which we later used as an excuse, when all of us had landed nothing. Good fishermen quickly overlook personal inadequacies when there exist natural pressures on which we may cast blame. 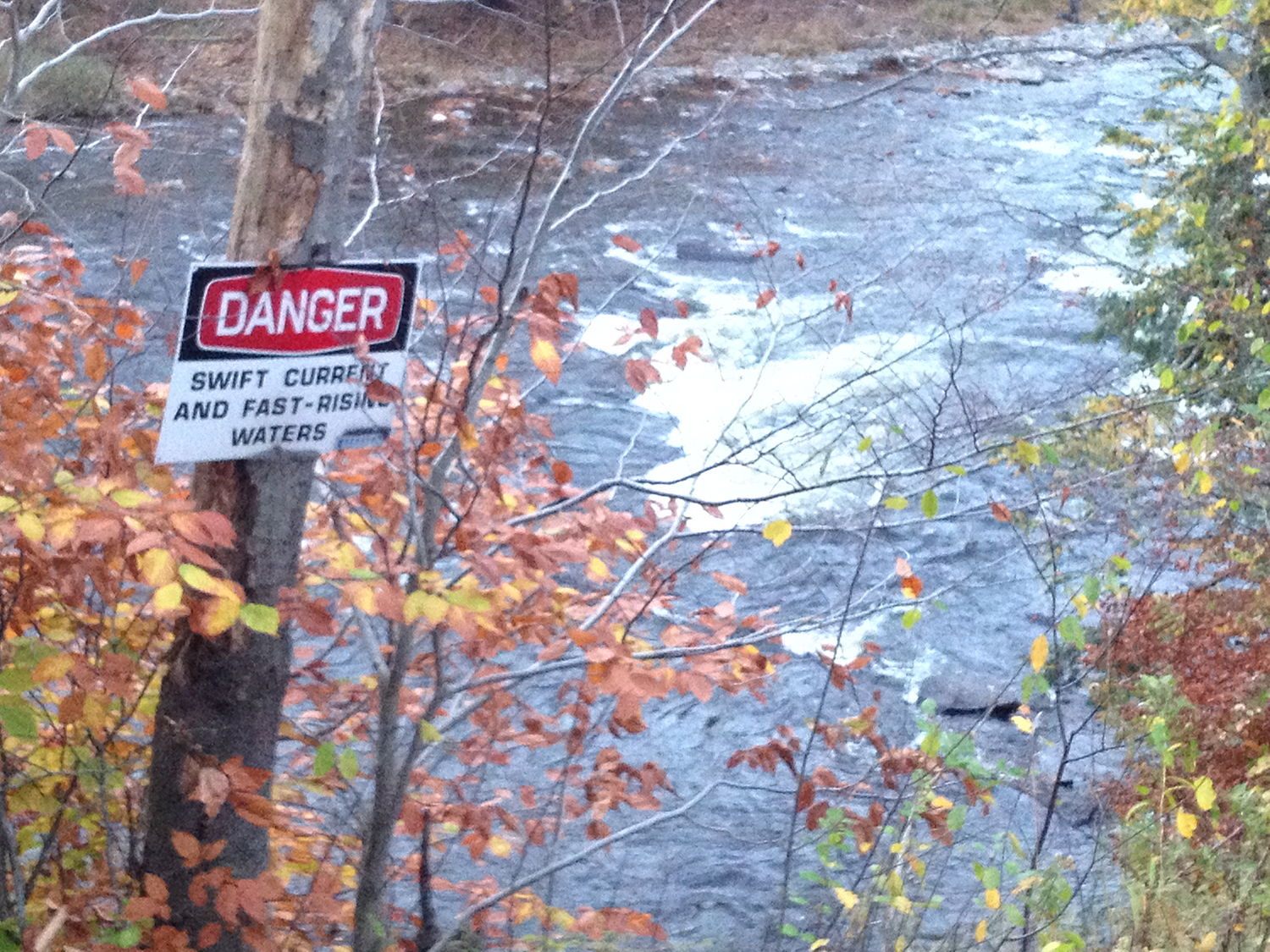 The river bottom is mostly slate, a rough collection of small rectangular fractures forced betwixt larger flat slabs, occasionally separated by smaller gravel piles brightly speckled with smooth river rocks. We cast into the rapids, alternating like chess pieces to different areas: skinny, deep, rocky, slippery; any place where big fish might pass by. Salmon spawn upstream from the lake but thanks to the usual life/work conflicts, we missed that great annual migration by just enough. No doubt there were some still in the river, we saw them with our polarized sunglasses and that is a tremendous experience: to witness twenty-five pounds of salmon work her way against such a powerful river, searching for a safe place to build her redd and lay eggs. Those were also the big fish caught and released by the fishermen standing next to us. These hatchery-raised salmon have little appetite after spawning; they are in the final throws of a natural life death cycle after providing the base for following generations. It is their eggs which bring in the steelhead.

The preferred equipment here is a seven to nine weight fly rod with a three way barrel swivel tied into a twenty pound fluorocarbon leader. The swivel gets a small tag line to hold a few split shot and after this is no more than 4 feet of tippet, a regulatory requirement meant to limit your ability to snag fish when the river is teeming with them, which was not when we were there but apparently was about an hour before we arrived. The split spot combination is meant to keep your fly or salmon egg very close to the bottom, which is where the fish are, so we were told. That small amount of weight is also perfectly designed for getting stuck on almost every rock. For the older fisherman, highly recommended is a pair of magnetic magnifier glasses. They click apart easily, affording better vision without keeping more expensive glasses on your hat, which will fall off when you step on the first rock. Additionally, the handy magnets are sure to get caught in your beard, giving you a sharp tug every time you turn your head to watch other guys catch steelhead. 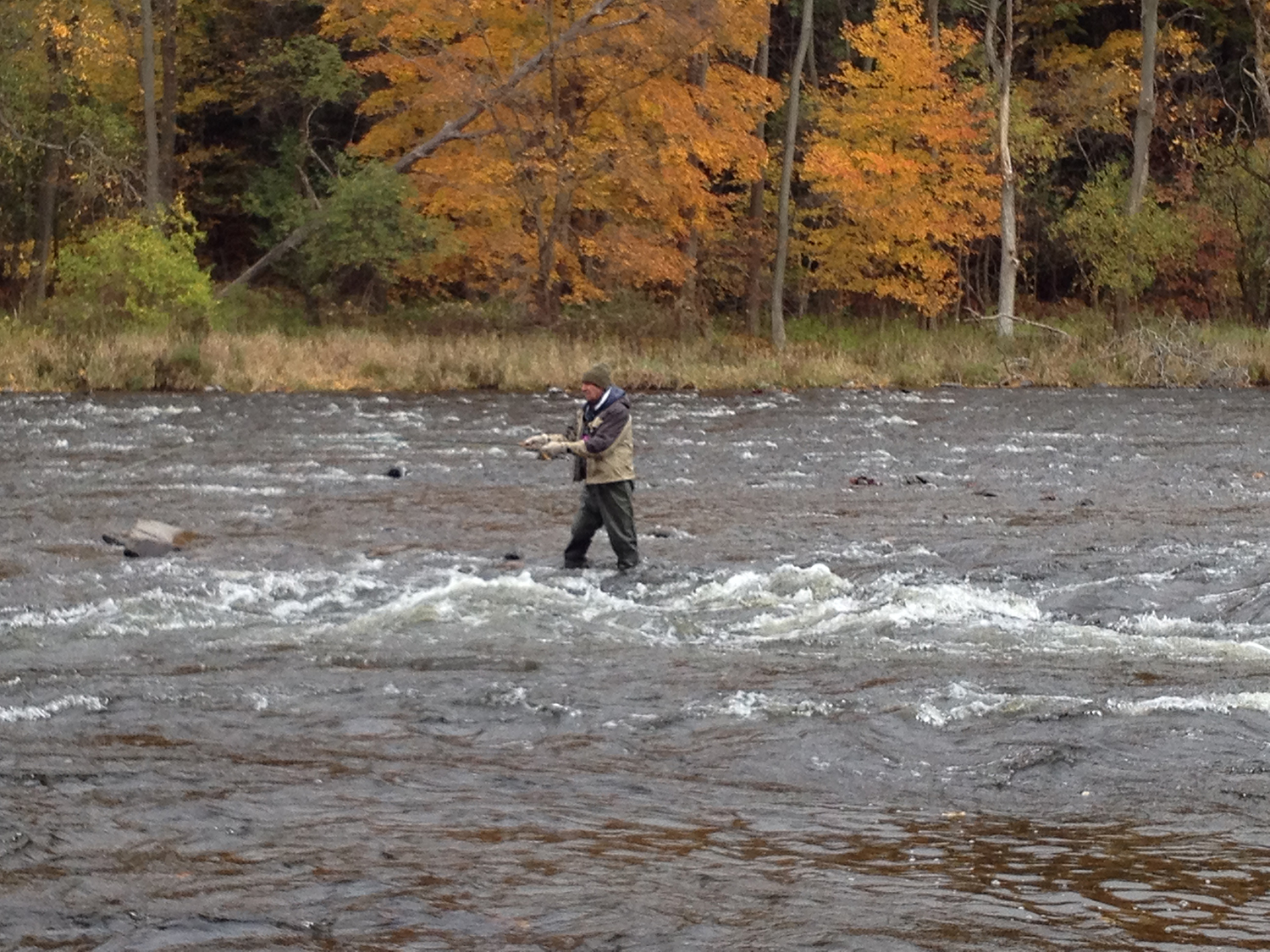 The rub is in your presentation, in how you roll your egg or imitation down along the rocks to mimic the rivers natural rhythm and path. If your fly line develops a belly, causing it to whip, you will catch no fish. You cast upstream then hold the rod horizontally to the rushing waters, allowing the egg to bounce realistically along the bottom, hoping to locate a hungry steelie or to land the egg in a salmon’s mouth. This is repeated ad nauseam. For those not accustomed to this method, it’s a lot like spending six hours at Mini-Golf, trying to get the ball into Abe Lincoln’s mouth from twenty yards back. In a rushing river. With no beer.

The second day, we learned to search out heavily scratched flat stones, tell-tale indicators of cleated wading boots. Obviously these were established hot spots for sighting and catching big kings. Later we learned they were actually chit-chat spots for a few guys to talk about all the great fish they had caught farther up or down the river. Knowledge really is power.

Some locals have a rude habit of sight fishing where you have been casting for forty minutes, relighting their cigar and making three casts before hooking into a fifteen pound steelhead. Early morning fishermen of this ilk often have the nerve to pack a travel mug in a vest pocket, providing them with a taste of dark roast after wrestling a fine Chinook to the bank in less time than it took me to pick up a twenty pound piece of shale in cold elbow deep water to retrieve my $1.49 #4 Chewy Egg pattern. This is a wonderful piece of river to practice tying flies and trimming leader. And replacing lost split shot. Thankfully, there were several handsome wood benches along the shore which provided some fine rest in between hours of not catching any fish.

Dampened by such poor luck, clearly a result of weather and bad advice from the heartless fly pushers at Whitaker’s Sport Store and Motel, we moved up-stream to a very public fly fishing only area in Altmar. During the fish run, this intersection of two dirty, vinyl sided streets becomes a crowded muddy circus, complete with shaggy haired teenagers leaning inside quickly constructed shacks, offering to fillet your catch for three dollars, a tackle store the size of my wife’s walk-in closet, both of which would likely fail any basic safety inspection and a “tavern” complete with a deer’s rear end mounted on the wall. It is America at her very best. From the parking lot you elbow your way down the rocky shore, past Marlboro boxes, McDonald’s cups and Skoal tins, set up just past the jaundiced maple tree where everyone apparently relieves themselves, and re-start your Mini-Golf presentation.

To keep one’s balance, occasionally you need to leave the dock and fill that spiritual void that comes with actually catching a real live fish, so taking notes in the Salmon River, amongst fish racks and fishermen hop-scotching over slippery rocks, nine weights high overhead, was a welcome change of scenery. In the end, though, clearly it was the editor’s specter, awaiting my dispatch, which kept me on a rough pine bench, observing and writing. That’s my best excuse for not catching even one actual fish.