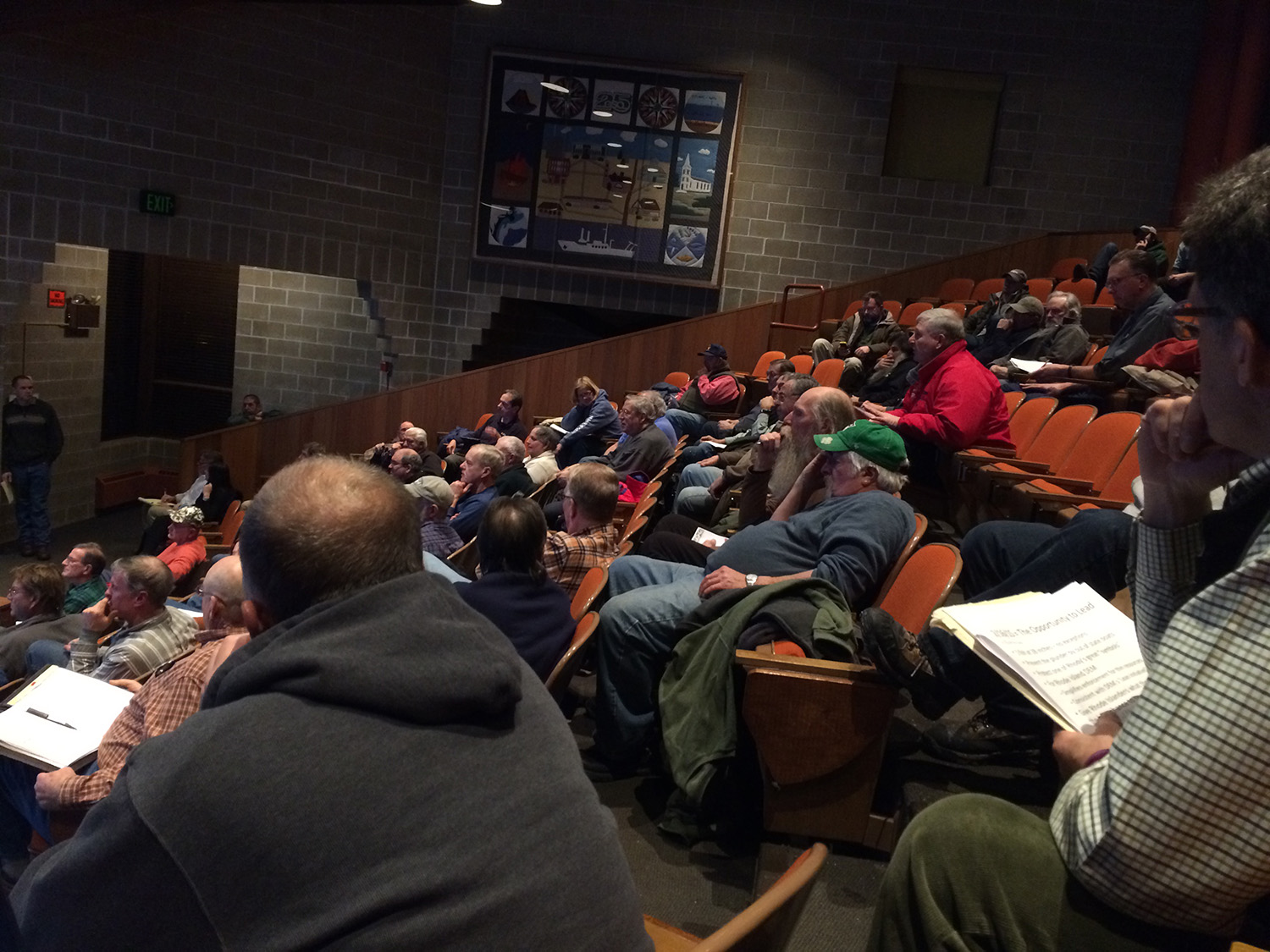 A thousand clear acres of wind have been tearing though the seams and zippers of ice fisherman on South Kingstown’s Worden Pond. Huddled atop fast freezing holes, cold, still, heads down, parkas stuffed with fleece until they look like sausages, they have braved that wicked wind for weeks now. But an inside line says the catching has been good. Similar to the way rain textures a ponds surface, ice may have a similar effect of making fish feel safer from overhead predators, drawing them into more open areas where less light means less chance of being seen. Save for plow blades slamming and slamming again on the miserable, decaying road, relentlessly pushing walls of white drifts back towards the pond and off the often unmanageable surface, there is silence. This is partly what draws people from warm trucks to drag sleds way out to the middle and sit and wait. Silence. Ice is a frozen playground without age limitations. Kids can go running like kids are supposed to run, when flags go flying and even when there are no flags flying, which is a perfect time to go running around the ice because how fun is it to stand fish skate and slide where you paddled or swam just a few months prior?

While those more taken by open ocean fishing may look with disdain on a fine two pound trout speckled with all the rainbows colors or a chunky thirty-six inch pickerel, fishing here in the frozen open requires the same level of preparation and patience for a very similar reward. In the words of the great Norwegian Artic explorer, Roald Amundsen, “Victory awaits him who has everything in order — luck, people call it. Defeat is certain for him who has neglected to take the necessary precautions in time; this is called bad luck.” A fine piece of pond or stream, frozen under a February sky in any wind, is just as rewarding as blue water trips to the canyons or the East Grounds.

If you have an interest in being involved with the development of our fishery rules and regulations, there are a few opportunities in the very near future with the Mid-Atlantic Fishery Management Council. The Council relies on advisory panels to review data, and then provide information and solid recommendations back to the Council on areas such as management ideas and plans in addition to the particular details of amendments. According to the Council, one of the main purposes of the individual panels is also to assist developing annual Fishery Performance Reports which, “provide the Council and Scientific and Statistical Committee with information about the factors that influenced fishing effort and catch during the previous year.”

Ideally, as in all ideal democratically-engineered systems, people of diverse, professional, academic and recreational backgrounds are encouraged to apply and are considered for seats. A balanced review of information and recommendations based on several viewpoints ideally creates rules that best serve the fishing community as a whole and the resource itself. Ideally.

Seats are open on these panels: surf clam and ocean quahog, summer flounder, scup and sea bass, mackerel, squid and butterfish, tilefish, bluefish, dogfish and ecosystems, habitat and ocean planning. You should expect to meet one or two times per year in any of the member states. Compensation is afforded for travel and daily allowed expenses for these three-year terms. If interested, you can download and application at www.mafmc.org/forms/advisory-panel-application which you will need to return by February 27. You can also call the Council office at (877) 446-2362 or email questions to jsaunders@mafmc.org.

On a larger scale, two seats will become available in August on the New England Fishery Management Council. One of eight regional groups, they manage our federal water fisheries, from three to two hundred miles off the New England states through nine different management plans for twenty-eight marine species and one anadramous fish.  Rhode Island is well represented on the Council by Frank Blount, Mark Gibson and David Preble, whose final, three year term expires on August 10 and so is not eligible for reappointment. Maine’s Vincent Balzano, a member-at-large, is eligible for a second term, provided he is recommended by his state. If you have an interest in this job, you will need to complete an application, which will be reviewed by Janet Coit, Director of RIDEM and receive a recommendation by our new governor. Because the governor will need to make her nomination by March 15, your application, along with a letter of interest and letters of recommendation will need to be delivered to Bob Ballou by February 25. He can be reached at 401-222-4700, ext. 4420 or Robert.Ballou@dem.ri.gov; or by traditional mail to Robert Ballou, DEM-Directors Office, 235 Promenade St., Providence, RI 02908.  The Nomination Application Kit is available at http://www.nmfs.noaa.gov/sfa/reg_svcs/Councils/CouncilNomination.htm. 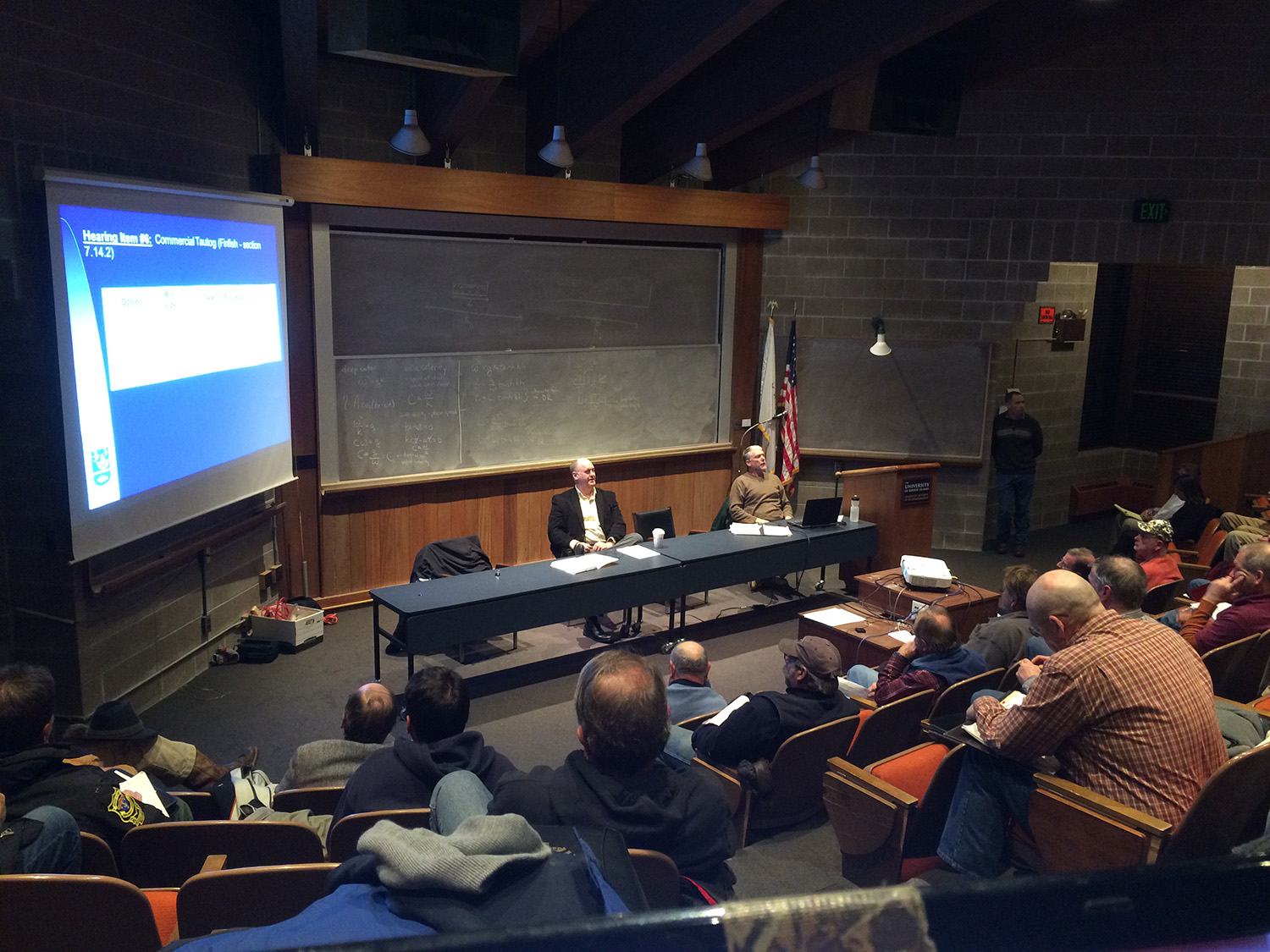 Closer to home, our RIDEM has scheduled a workshop and formal hearing to discuss proposed changes to several aspects of our state’s fishery laws. This will cover topics like warm water harvesting of clams and their susceptibility to the charming gut-wrenching, watery diarrhea producing bacteria Vibrio ssp., escape vent placement for commercial lobster traps and season/harvest regulations for summer flounder, tautog and scup, among others. Recreational striped bass regulations are also on the docket. There will be a workshop prior to the formal hearing to guide attendees through the lingo, spreadsheets, jargon, acronyms, benchmark assessments and biological reference points. The hearing is time for having your recommendations or opinions be made part of the official record. The workshop begins at 4:30pm on Monday February 16 at URI’s Graduate School of Oceanography, Corless Auditorium, South Ferry Road, in Narragansett with the hearing to follow.

For the commercial harvesters, RIDEM will conduct a training workshop at CCRI in Warwick to aid fishermen in understanding and properly utilizing the on-line catch and effort reporting system, which has replaced those cumbersome paper log books we used to report landings. This meeting is not mandatory; it is a helpful few hours to walk you through the system and will be held on Monday, February, 23 at 6:30 pm. Questions can be directed towards Tom Rosa at 401-423-1923 or emailed to tom.rosa@dem.ri.gov or to Nichole Ares at 401-423-1926, whose email is nichole.ares@dem.ri.gov. If you don’t necessarily believe the government is here to help, there are lots of workshops, hearings, meetings and applications this winter season to help you decide for sure. Regulations can be a lot like sausages, some don’t want to see them made but there are others who want to see the whole deal and maybe even improve the process.

Episode Four is ready for your listening pleasure. Miles Corayer has been hard at work writing original music and themes. You can listen to our other episodes and see some of our above and below water videos on our YouTube channel, Fish Wrap Writer. We's love you to...
Keep Reading

This week: how to avoid toxic shellfish, where to catch a striper and how to lose a fly rod and smile about it. Narragansett Bay has been closed for the first time due to a bloom of the toxic phytoplankton Pseudo-nitzschia. From the mouth of Narragansett Bay to...
Keep Reading

If you're planning on fishing for trout on SPRING"S GREATEST DAY, April 8... you’ll need a freshwater fishing licence from RIDEM. Resident licenses cost $18 while visitors can fish for $35. If you want to keep your catch, a trout stamp is required for an additional...
Keep Reading

Neither wind nor rain nor anything else

I came because I love to fish,” said Pat Green. Sitting in a stark white Cape Cod conference room with an impromptu bar on one side and a plate of smoked salmon on the other, Pat was happy to be out of the rain. Fall was delivering a third day of biblical...
Keep Reading