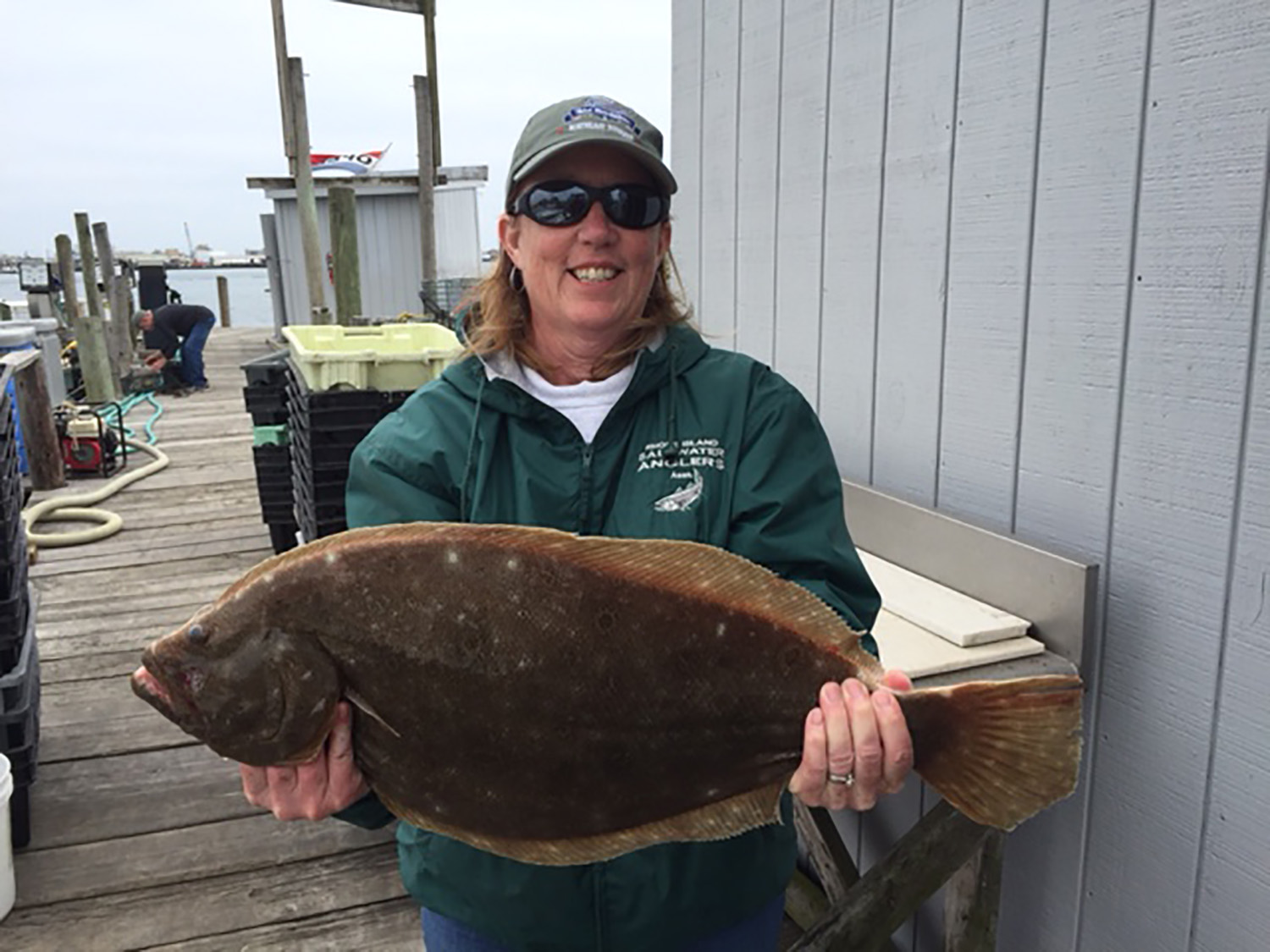 This past weekend blessed us with fair winds, calm seas and just enough fog on Sunday to add a cloak of secrecy to those drifting for fluke which so far, has been slow but decent. Most success has been found along that magical 50-60’ line just south of Charlestown and the center wall at Galilee but the water is still cold, holding in the 43 to 46º range. Regular spots around the bridges will surely start producing with an increase of a few degrees. Block Island has had a good bite and that’s where RISAA member Gisele Golembeski landed a 6.4 pound doormat, one of three keepers for the day, so she easily takes first bragging rights.

Diehard outdoorsmen and equally gracious onboard hosts, Alex Hoxie and Tanner Littlefield spent Sunday last drifting for fluke along that 50’ line. With flat-calm seas and dungeon-thick fog, they tossed back several flats and a few thick sea bass into chilly 44º waters thanks mainly to Tanner’s proven “Power Arm” technique.  That Contender runs fast and stays clean; clearly one of the sweetest boats in the fleet. There’s a rumor some decent stripers have moved into warmer, more shallow waters around the island, where  the current runs strong, which is a very good sign. There is only coffee shop speculation as to whether southwest ledge will produce the bounty of big bass like it did last year but with new necessary regulations in place, the stocks will have a much better chance of surviving the season. Small bass continue to be landed at the mouth of South County breachways and along the famous west wall. 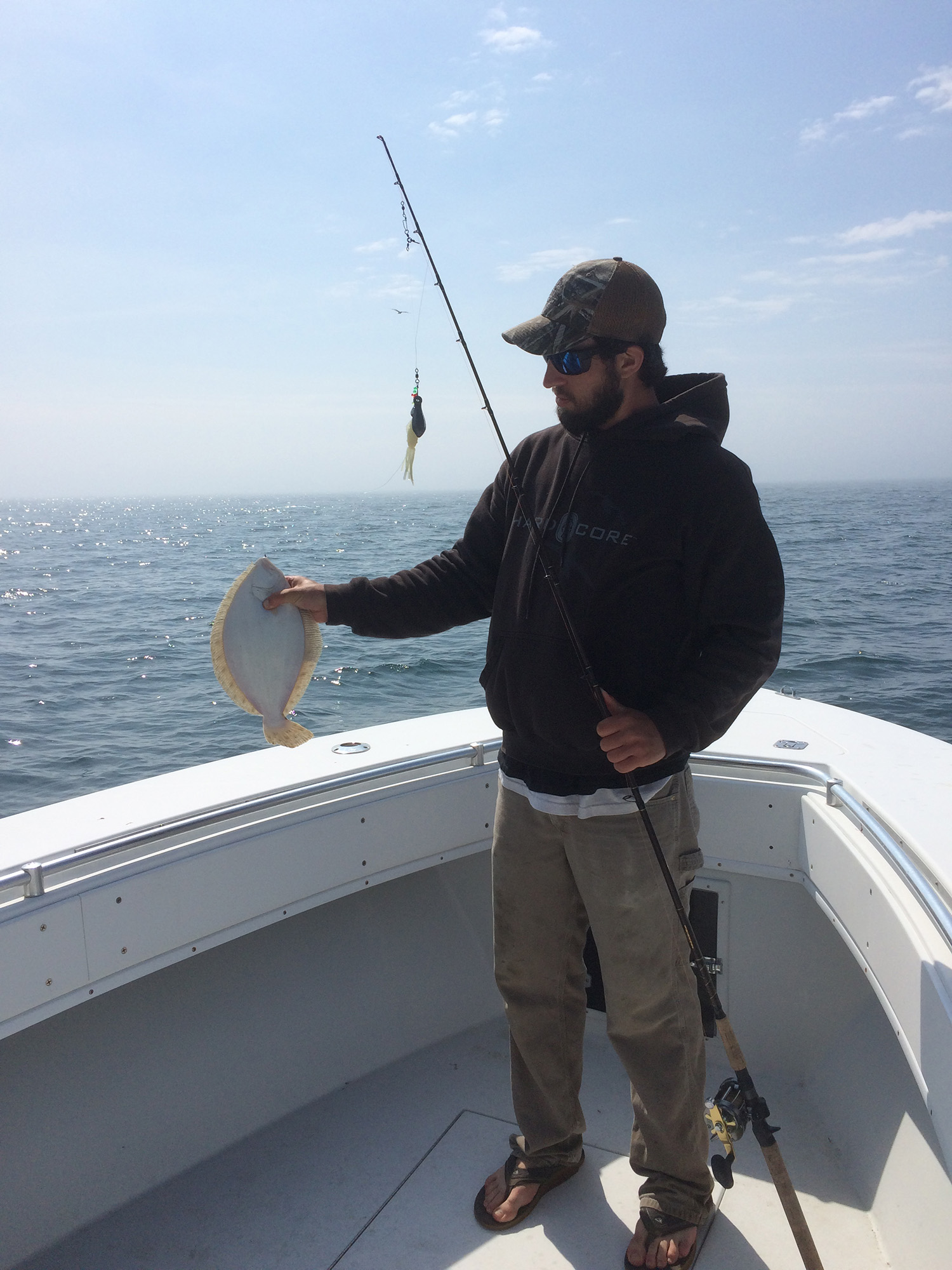 tanner littlefield with a fluke just a bit too short

The migration is on as keepers have been landed in states to our south, like short-sighted New Jersey, which did not agree to join other Atlantic neighbors with a one fish at 28” law. Up in Maine, few stripers have been seen but the herring and shad runs are in force which means bass are surely at their heels. Early season fishermen are noticing big piles of bunker in upper Narragansett Bay and even a few around the lower salt ponds. Prudence Island is holding some schools of schoolies, usually more towards the more shallow rock piles. The “low and slow” season is pretty much over so picking up the rod tip and the retrieval speed may be your ticket to the first keeper of the year. This is worm hatch season as well so keep some bubblegum colored soft baits in the tackle bag for holdover bass looking to feed before heading out to deeper waters. These are amazing days to be a fly fisherman with a box full of Lefty’s Deceivers and Peanut 3D Bunkers. An experimental option may be a small Lick-Em Candy Chain lure in soft pink made for steelhead. Their great action and correct weight may work in our salt flats. While many are finishing off the spreader bars and preparing for the first canyon trip, there is little to match casting into sunrise from a kayak, listening for the slap of shallow water striper tails. Fishing here offers us so much.

The start of the bite also means the start of tournament season and there are a few notables you might want to enter sooner rather than later. First up is an important one, the Pawtuxet Athletic Club’s Memorial Fishing Tournament in honor of departed members Jay Shaw and Everett Souza. It runs from May 29 until June 6 for the waters between the Sakonnet River, Mount Hope Bay and the areas of Narragansett Bay north of the Jamestown and Newport bridges. All entry fees are donated to Saint Mary’s Home for Children and Wounded Warriors. Prizes will be awarded for the heaviest bluefish or bass at the tournament cookout on Saturday, June 6.  First place for largest fish is $300, second place is$150, third takes home $50 and men, women and kids will have awards for second and third place.  Tournament rules and entry forms can be found at the Pawtuxet Athletic Club, 12 Aborn Street in Cranston  or by calling Fred Chiarini at 401-528-9707.

On The Water Magazine has started their annual fishing contest and are doing some great work supporting the new catch and release division. The rules are simple. Once you have landed a fish, you take a photograph of it, hopefully against a measuring tape, then you respectfully return the fish to the ocean. Your measurement needs to be taken from the tip of its closed mouth to the very end of the tail. No stretching, please. This picture then gets submitted through a very easy on-line form and you wait to hear back. The best way to support a catch and release division is to be an active participant so that event coordinators realize that we are concerned with the state of our fisheries. It’s a self-supporting proposal, one that will keep sponsors involved as well.  Points are then awarded for each ten inches of fish and random names are drawn each week for any of the very cool products, like Sebile lures or Costa sunglasses.

Speaking of, Costa has just joined as a supporter of the Pabst Blue Ribbon Tournament, with categories for bass, blues and fluke. In addition to the entry packet, there is a form to enter the Evan Metropoulos Conservation Award, which will give one winner, selected at random, a nice check for three thousand dollars. The base rules are also simple: fish must be photographed with a ruler which clearly shows a real, truthful, accurate, honest and not honest-ish minimum length of 28” and a correctly submitted form. The regular tournament also has some very conservation-minded minimum sizes, like 40” bass, 28” blues and 21” fluke. The tourney began on May 15 and runs until October 4with entry forms to be found at www.pbrfishing.com.  Whether you join a tournament hoping for prizes and free koozies or prefer to fish the rocks alone, the season has started, fish are moving in quickly and each day the waters get just a little bit warmer.

If you have a report for the new season or pictures from your catch, please send them along to fishwrapwriter@gmail.com . No secret spots or favorite rock piles are given up here.