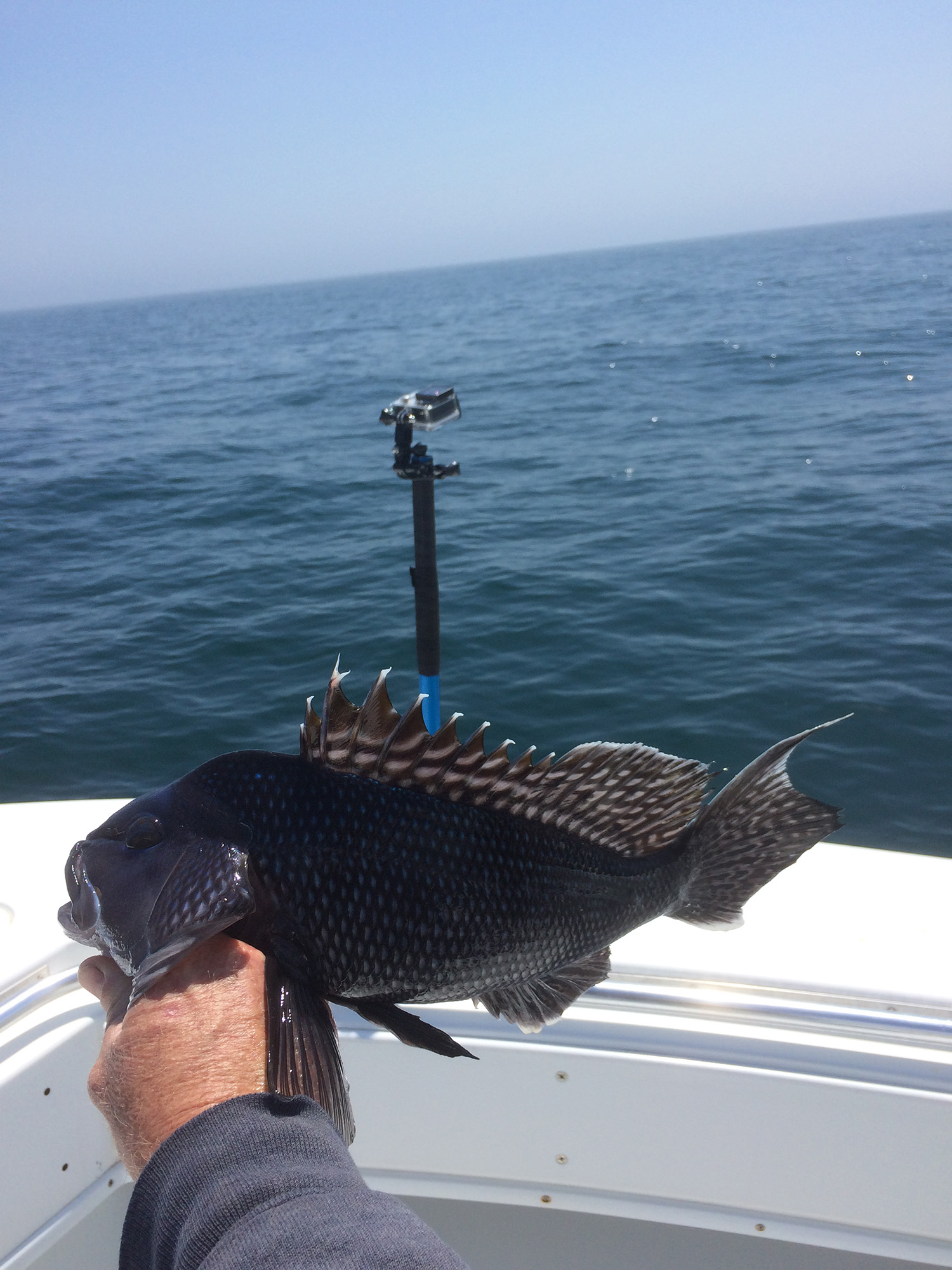 Striped bass of all sizes have moved into local waters. Many seem to be holding up high in Narragansett Bay near the mouth of the Providence River and around the islands. This time of year classics like Yo-Zuri Crystal Minnows, white or pearl Zoom Fluke’s and Slug-Go’s seem to produce well but some are reporting finicky fish are holding out for pogies, either live-lined or chunked.  Big piles of pogies can typically be found around there and taken alive with a lead weighted snagging hook if they are reeled in carefully so as not to eviscerate them. The shoals of Conimicut Light will hold bass this spring as will the corners and pockets of Prudence and Patience Island’s.

On the southern beaches, relatively cool water and air temperatures have kept numbers of some of the fish and fishermen down. There are bass being caught at all the breach ways now, not necessarily huge ones, but it’s too early in the season to be greedy. The strong currents there can be great places for bucktails tipped with clams, worms or some Uncle Josh’s pork rinds. Those will also serve you well along The Pawcatuck and Cemetery Cove with larger black Slug-Go’s producing after dark. Even the usually heavily trafficked West Beach Road down to Quonochontaug Pond was pretty quiet over the holiday weekend with just a few folks casting plastics from the rocks and a few dapper fly fishermen strutting their stripping baskets along the flats.

Speaking of, Quonny Pond has been reclassified thanks to collective efforts to minimize our effect on the water. According to RIDEM, “the small cove at the western end of the pond that was previously closed to shellfishing has re-opened due to improvements in water quality. All of Quonochontaug Pond is now approved for shellfishing. Harvesters should still be aware of existing management area restrictions in the pond”. Time to get out the clam rakes; residents do not need a license but if you are visiting from away, even just for the weekend, one will cost you just $11.00 and can be purchased online at https://www.ri.gov/DEM/fishinglicense/.

Fly-fishing certainly takes some time and practice to master that graceful 10 and 2 arc. To encourage more women to try the sport, RIDEM, the Narragansett Chapter of Trout Unlimited and Wood River Fly Fishing are offering a women-only fly-fishing class. On Saturday, June 27, all the basics on the correct gear, how to cast and tie flies along with where to fish will be covered by patient instructors willing to help. You will need to pre-register by calling 401-539-0019 or by emailing kimberly.sullivan@dem.ri.gov.

The fluke bite is improving, with the head boats reporting more consistent landings and bigger averaged sizes. The fleet has been just off Matunuck Beach as well as points just south and west. Block Island seems to produce some of the bigger fish this time of year but there do seem to be keepers right along the mainland shore.

As the water slowly warms, squid fishing will steadily improve. Our two local species, Loligo and Illex, have a habit of disappearing the night after they were around in droves. They are fine striper bait, the fresher the better. Last year’s frozen flats may still fool fluke when tipped on a pink or green bead chain, but bass prefer the fresh offerings. Jigs can be purchased at any tackle store with some of the favorites being Yamashita’s and the Yo-Zuri Ultra Bait Aurora. That, a light and a five gallon bucket are all you really need to catch some dinner. If you come up a little short, Narragansett’s venerable dining hall, Aunt Carries, was just approved for a beer and wine license, so that might help.

Most guys will line the Goat Island bridge when squid fishing is strong, spending all night under the lights. Any area with overhead lights will soon attract them or if you have the time, hanging off a pier with a floodlight can be a few hours of good family fun. If saving them for bait, remember not to clean them in fresh water before freezing.  Squid are cephalopods and are blanketed with chromatophores, tiny organelles in their skin cells which contain pigment and reflect light, allowing them to change colors or become nearly invisible under water. They can also expel ink through sacs located near their gills to put off predators. Squid will unload clouds of the ink not only to make an escape, but some research shows that it is quickly produced in shapes meant to look like another squid. This can be enough to confuse the predator and allow for their escape. Fantastic.

The Herring Alliance has noted a dramatic decrease in returning river herring numbers in RI, Connecticut and Massachusetts. At the Post Road fish way in Wakefield, volunteers, “lifted tens of thousands fewer river herring this year compared to 2014.” Hopefully a percentage of that noted decrease is thanks to the almost-completed ladder system there and at the Palisades Mill working better than most anticipated. Those fish would have entered the upper river without being handled and counted. Out-migrating fish have already been seen heading back to sea so some spawning did occur. Look for them to return in three years. The Alliance also noted that “In Connecticut, the runs this year were described as ‘the worst in memory’ by Steve Gephard, a supervising fisheries biologist for the Department of Energy and Environmental Protection”.

Hopefully this down turn is product of a natural cycle we do not understand and stocks will return in better numbers next spring when the fish way construction project is complete. If the decline is not natural, perhaps it is partially due to our impediments, like the 75,000 dams still impounding waters in this country with, according to University of South Carolina-Columbia, almost 4000 in New England alone. Former Secretary of the Environment Bruce Babbitt once noted that “on average, we have constructed one dam every day since the signing of the Declaration of Independence.” Good Lord. 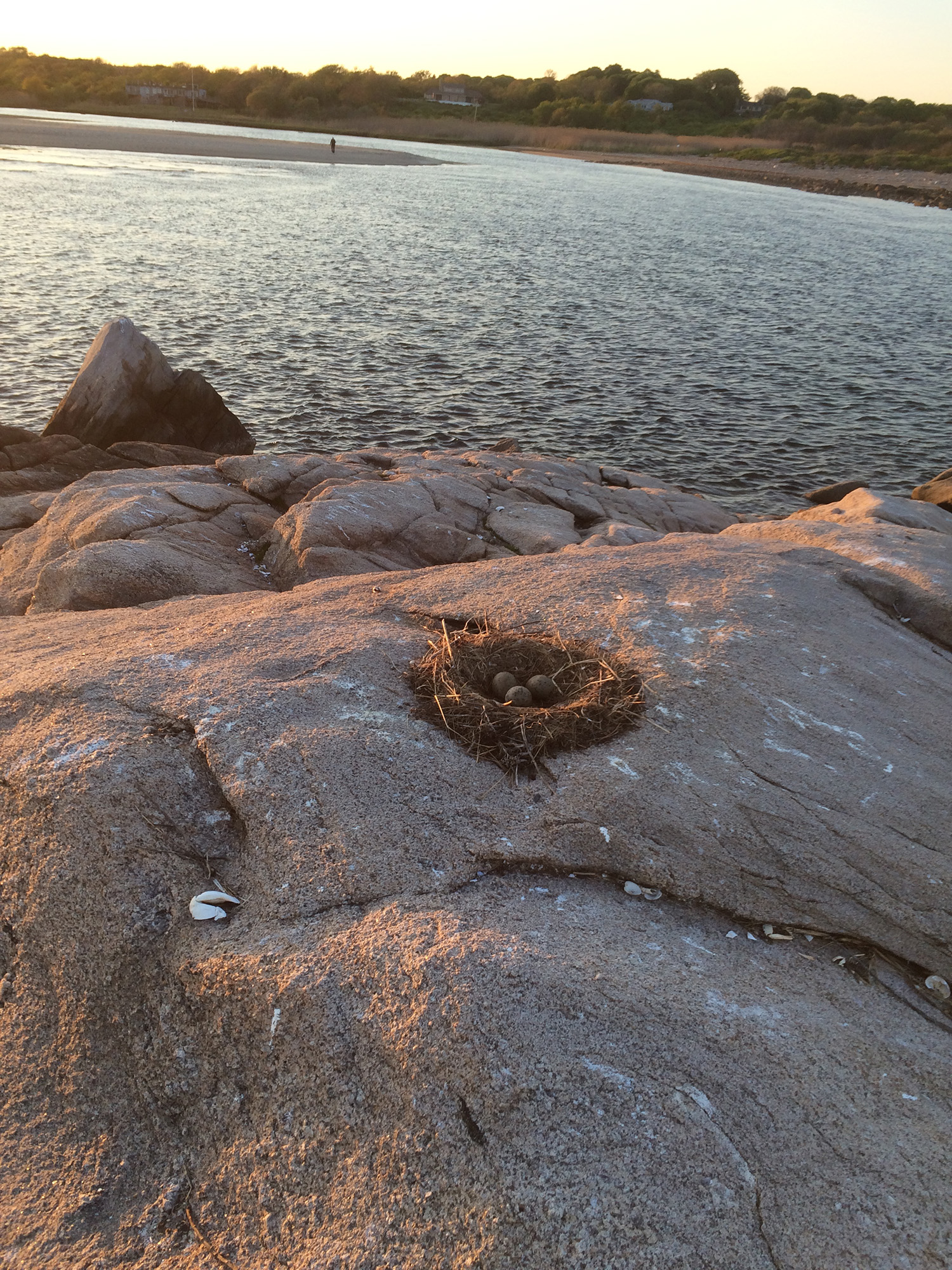 black back gull nests at the rivermouth

For the weekend, we have the options of squid for fluke and bass bait or for dinner, worm hatches in the shallow salt ponds, newly arriving bass and blues at the breach ways, a sweet new boat ramp in Galilee, warming waters in the Bay, fly fishing lessons, the smell of clam cakes and port, plus lots of new places to spend some time on the water. If you have a report for the new season or pictures from your catch, please send them along to fishwrapwriter@gmail.com . No secret spots or favorite rock piles are given up here.