A look at Block Island, not Block!

Over on Block Island, the fishing seems to be mirroring the mainland action: good but not great. With the exceptional exceptions of a few big bass being taken in the Narragansett area, shore fishing seems a bit slow. Again. Didn’t we just go through this last year? We saw schoolies and some bluefish right off along the west wall in Galilee followed by some breachway action and then a worm hatch. So far so good. Then a few big girls cruise through, everyone gets excited to get back on the water and then the light dims.

Schools of menhaden seem to be few and far between in the bay. There were some squid around prior but they seemed to have moved on too. Islanders really know how to take advantage of some key natural movements, like jigging for squid off Champlain’s or the Boat basin docks. Since squid typically arrive before the state of New Jersey does, kids have a field day out there filling buckets at night for dinner and bait. 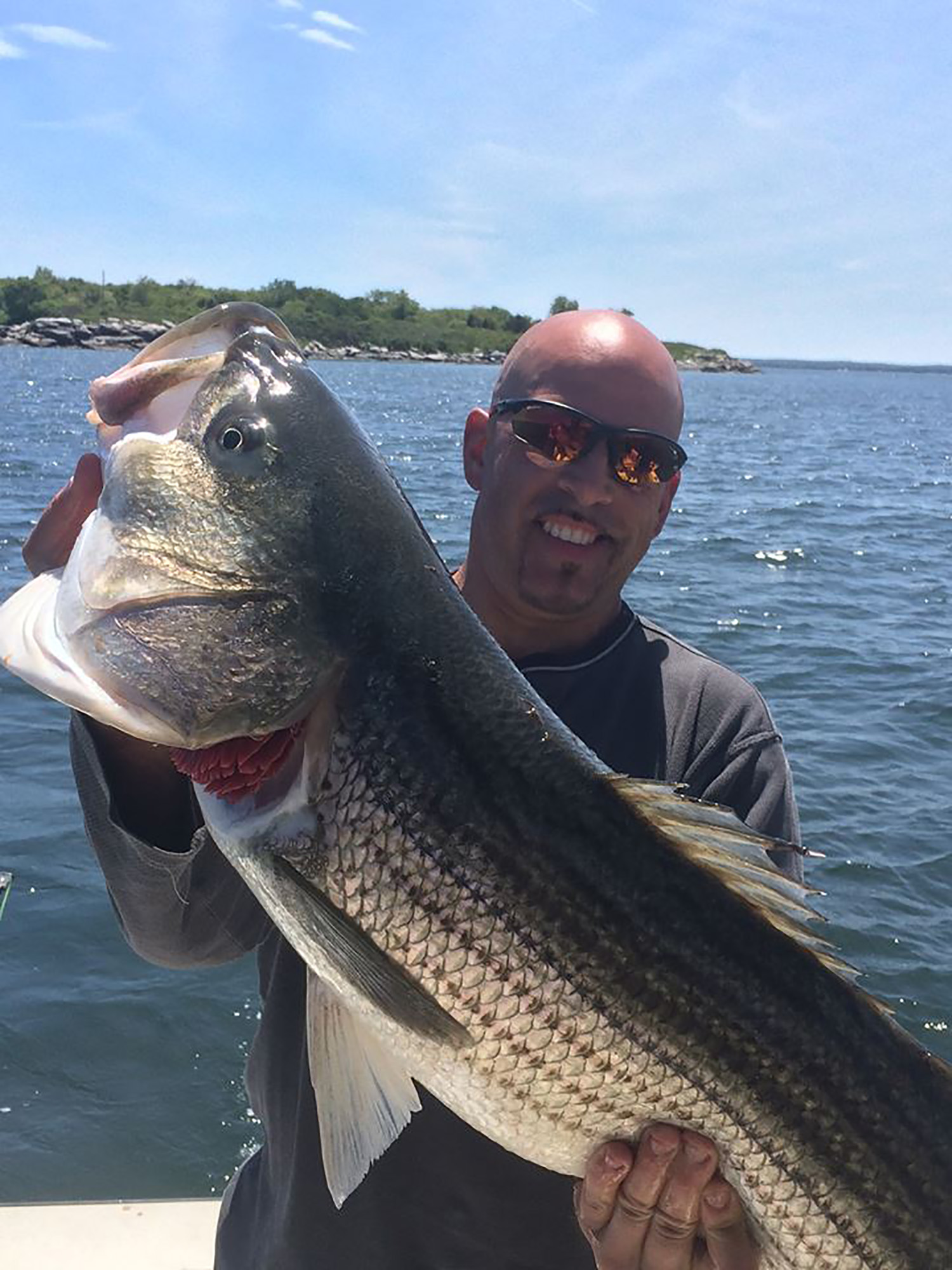 Sand eels, or more properly lances, have moved in to near shore waters and they are a favorite of stripers and bluefish. The lances move in from the southwest and according to Sol Schwartz at Twin Maples Bait and Tackle, they are in the six to eight inch range and are “all over the west side”. Lances dig holes holes approximately six inches deep in the shallows, just below the low water mark, so work your imitation close to the bottom when you are in close. Interesting to note that lances swim in the same undulating manner as American eels and often in large numbers. Although there is supposed to be safety in numbers, the sea is no union shop so when clouds of eels appear, bass, bluefish, even cod hake and whales will chase and devour them. Since they are hard to catch on your own, there are a few imitations on the market. Hogy makes some impressive and perfectly colored eels in a few different lengths that will serve you well either for some top water action or in deeper water when rigged with a swim bait hook or jig head.

The west side of Block Island, or as a nice and naive person once referred to it, the Pacific side, often is rich in bait and predators this time of year. You can take advantage of prevailing currents by casting from the shore in any of several, easily accessible spots. Dories and Gracies Cove can be reached by roads, as can Charlestown Beach to the north. There is no sign for this beach; just park on the hard sand a few car lengths behind the fancy black SUV that’s axel deep in the soft sand. Once you are on the shore, it’s good fishing on both sides.

At the end of West Beach Road or what islanders know as the Dump Road, there is a great cobble bottomed beach that takes strong currents and yields lots of fish. For a time this was a hot spot for weakfish. Sol reported that one fisherman had been landing big bluefish there, mostly in the 8-10 pound range. To the north is the famous rip under the North Light, which is a decent and fishable hike, keeping in mind the currents, strong tides and very soft shoreline. Captain Billy Gould, relentless owner of the G Willie Makit, always seems to do well all over the island, including this area. Trolling rigs over his 27 years of island numbers, the man is practically an institution over there and a fine person to match.

As for bass around the island, most of the reported catches are still in the schoolie class, but then not all people tell all. The island has a way of producing those magic, one in a lifetime fishes, even when most guys are grumbling. If you are of the mind, take a drive to southwest point, walk down the short cliff to the rocky shoreline until you are facing a small point clearly exposed at low tide, a special spot always known to me as The Church. Looking at the sea, there is a straight west fetch on your left and a decent drop and northerly current to your right. The bottom is hard bony and ready to keep your buck tails but if the water is high enough, needlefish, poppers before dark and bottle plugs will dart along the boulders, calling out stripers. It’s a hell of a place to cast away a sunset.

If you are looking for fluke, the west side also seems to be the right side now. Mainland fluke hot spots seem to be yielding more black sea bass than keeper fluke, whose season opens on July 2, runs until August 31 and has a one fish per day limit. With bay water temperatures in the low to mid-sixties and sea temperatures five or six degrees cooler, hopefully a few weeks of sunshine will warm things up, on the surface and on the hook.

Quick question, when you visit the shoreline, be it fresh or saltwater, what’s your priority? Chances are you want to park your vehicle, then fish, swim, paddle, explore or maybe just lean back with a cold one and practice some kayak lethargy and that’s all good. The...
Keep Reading

Well, we're big fans of the Narragansett Surfcasters fishing club so here's a little more notice of their Surf Day Used Tackle Sale on February 9, 2019 You can rent a table to sell off some gear or just walk the isles to pick out some new stuff on a very cool winter...
Keep Reading