enforcing the law with courtesy and patience

From federal level hearings to local fishing club outings, there is a growing recognition that we the people need more enforcement of laws protecting our natural resources. 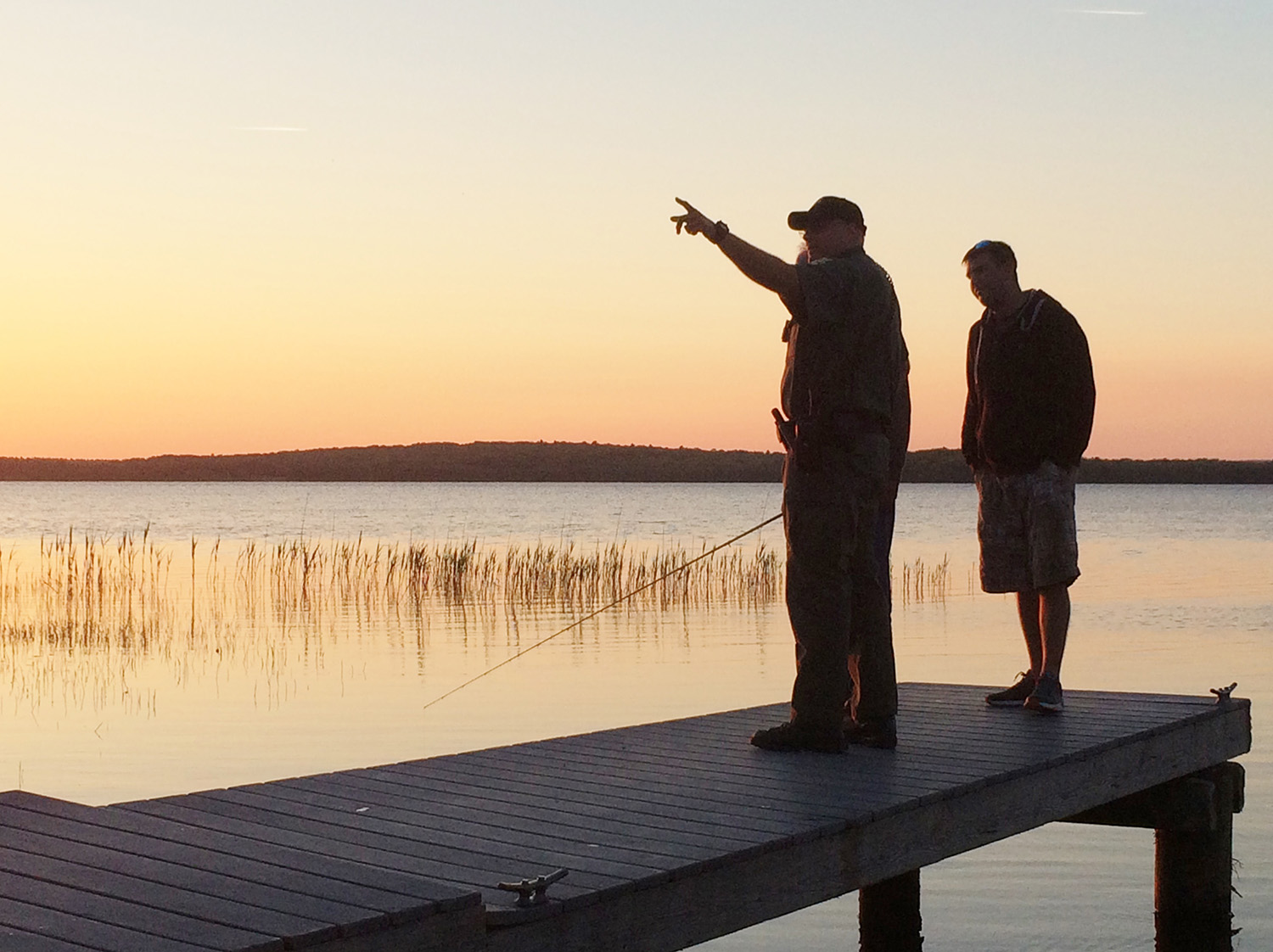 There are more of us than ever on the water and in the woods and not all play by the rules. Commercial and recreational fisheries laws constantly change.  Open space becomes scarce as land gets sold. Permanent KEEP OUT signs get posted in front of seasonal houses and hunters get pushed to other areas. Globally warming waters are altering migration patterns, allowing species like trigger fish, snowy grouper and black sea bass to move farther north, attracting even more fishermen. Enforcement of all this is difficult and while once they suffered criticism for not being there when we thought they should be or for not seeing what we saw, the real push now is to hire more officers.

To better understand to scope of their work, 12 year veteran Environmental Police Officer Michael Schipritt agreed to share his truck with me for a Saturday night shift. He clearly loves his work and has the pace, the courtesy, the confidence that many solid police officers have. Enforcement officers are highly trained, having graduated from the Rhode Island Municipal Police Training Academy, in addition to their specialized training in boat handling, firearms, public safety and other critical skill areas. A few more than two dozen officers patrol 1212 square miles of land, 40,000 acres of state-owned forests, 384 miles of tidal shoreline and more than 20,000 acres of ponds and lakes. They enforce regulations for hunting and hunter safety, trapping, fishing in fresh and saltwater, recreational and commercial shellfishing, nuisance and rabid animals, boating safety and marine accidents, vandalism, larceny, assault, and motor vehicles on the State’s public land, all while patrolling 8 state parks, 7 state beaches, 5 campgrounds, 2 bike paths and a golf course. Burlingame State Park alone has 755 campsites so a busy weekend can mean more than 4,000 campers. This is in addition to overseeing commercial fishing piers, port facilities and state land leases. 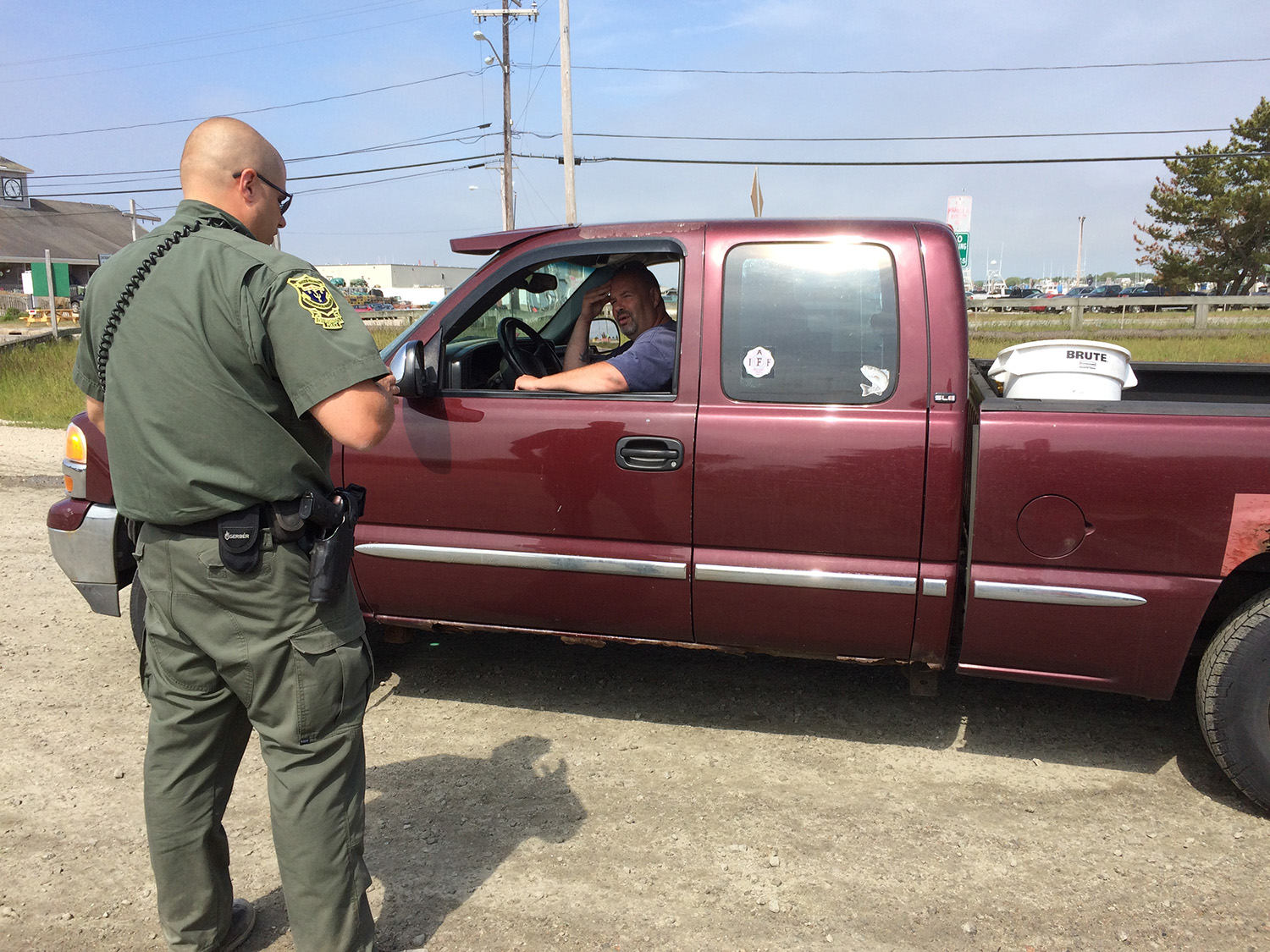 We dispatched to Hope Valley in the hopes of rescuing an elusive wounded turkey vulture, well known by the department, who ultimately gave us the slip into heavy brush.

On the way, he mentioned the summer staff assisting with tasks like picking up the more than one thousand deer hit annually by automobiles. Their help allows officers to focus on patrols, but they are only seasonal and when asked if they are needed year-round, Mike answered, “They are a God-send. I would never say no to more help”.

We looked for clammers near a salt pond pollution line.  We checked licenses at Barber and Worden Pond as well as along the south beaches.  Interacting with fishermen, we heard lots of interesting excuses.  The scene goes something like this: Officer, “Do you have your license?” Angler, “No, I didn’t know I needed one. No, we’re staying with my grandparents. No, it’s in my other vest. No, I’m from New York. No, I didn’t catch anything but wind”. It’s also obvious the green uniform makes people talk faster than they can think. When asked how the fishing was, one nice man in a worn out track suit and sandals a few sizes smaller than his feet required, answered, “Pretty good, I took a couple of keepers. I mean one keeper. I always only take one keeper a year”. Mind you this was the third week of May, just the beginning of a long fishing season. When I mentioned that it was good to see some larger bass around the Pawcatuck River where he said he had been fishing, he responded quickly, “Oh yeah, they were about 28 inches”. Any fisherman worth his salt knows we stretch the truth when it comes to fishing so when he said “about 28”, he looked down at his feet. If he had said they were 36” that would have translated into being just about legal size but his choice of words led me to believe they were something less.

While Officer Schipritt’s area is technically South Kingstown and Narragansett, all officers must be familiar with the entire state, meaning backroads, ponds, areas open or closed to hunting and waterways. At Scarborough Beach, we met K9 Officer Chris Duguid and his 2 year old Belgian Malinois patrol dog, Bear. Trained to indicate on a variety of items, including humans and firearms, Bear provides important support to the department and to outdoorsmen, should they be lost in the woods or be involved in some illegal activity.

When another officer radioed he was handling a fisherman with two outstanding warrants, Mike paid very close attention. His colleague was at Carbuncle Pond in Coventry and while so far the subject was compliant, Mike knew things can “go sideways very quickly” when you work alone and your arrestee has no intention of spending a long holiday weekend in a holding cell. We were the closest unit at that point, some 30 miles of back roads away. One officer, one bad guy, two warrants.  That’s something to give us all pause when we consider how small a piece of the state’s annual budget goes to environmental law enforcement, the area they cover and the high quality skills they possess.

According to the 2016 State Budget, the Governor’s Natural Resources recommended funding, which includes both RIDEM and CRMC, will be $98.8 million, a decrease of $9.9 million from fiscal year 2015. While there are some additional federal funds for capital purchases and specific overtime, consider that against the more than 38,000 registered boats on our waters and that the U.S. Fish and Wildlife Service in 2013 found that nationally, the amount of hunters increased by 9% while fishing participation increased 11%. When you realize their truck computers are not equipped to check a license issued by their own agency, you understand it’s time for an upgrade.

A few weeks prior, he encountered a female hiker who did not appreciate having to wear orange clothing during turkey hunting season and felt the woods should not be used for hunting. It is the hunters, he politely reminded her, who pay some $25 billion a year in federal, state and local taxes on firearms, ammunition, hunting gear and clothing, which pays for the preservation of open space, like the place in which they were standing. Hunters and fishermen are equally entitled users, just like hikers and bird watchers, except in this particular case, the hunters paid for the land. Not satisfied, she produced something red, not orange. Red, he told her, is the color of a turkey’s face.

This shift had begun with some good detective work, looking for a reckless captain who, on the prior night, had blatantly ignored some pretty basic boating laws when he went speeding through Galilee harbor. First was a witness statement, then some knocking on doors and then ultimately a visit to the surprised skipper, who though clearly unapologetic, accepted the $100 ticket before shaking Officer Schipritt’s hand, which speaks volumes about how these officers handle themselves.  This is not glamorous work; from capturing rabid skunks, measuring clams and chasing turkeys through the thickets to investigating boating fatalities and inspecting commercial boats, ultimately it is police work. Our shift ended in the dark, helping someone with paperwork to navigate the boat registration process. As we drove back to the office, he told me, “I will do what I can for him”. Enough said.

Spud Mack has passed away at his farm on the low rolling hills of Matunuck.  A carpenter by trade, he raised cattle and 4 sons, hauled lobster traps, dug clams, fished for bass and flounder, hunted ducks and deer. Always in demand as a butcher, his words were few and could be tough as his hands. You quickly knew where you stood in his eyes. There are many classic Spud Mack stories to be told; they are of an old school, hard-working, straight shooting man and I am grateful for having known him.