This year we have been blessed with so many bluebird mornings and sunny days with fish of many species all around us. 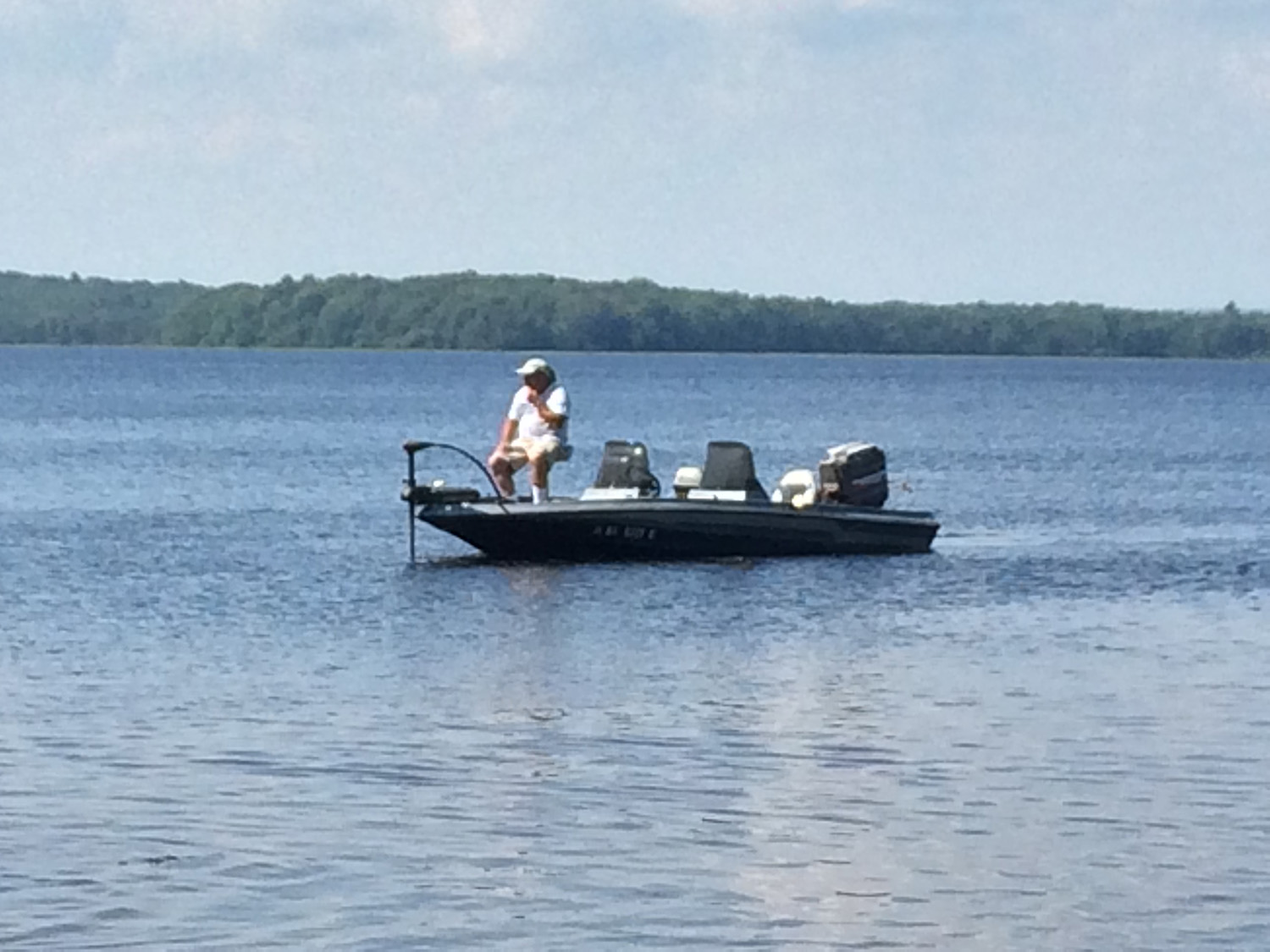 It’s only natural that being the Ocean State, surely most of our focus is on fishing the ocean. There are charter boats to hire, trips around Block Island to be made and plenty of tournaments where we can try our luck. On The Water has its summer-long Striper Cup, which includes a fine focus on catching and releasing. The Pabst Blue Ribbon Tournament is in full swing, with some really big striped bass and fluke being recorded. There have been several off-shore tournaments and there is always something happening at Snug Harbor. On these clear days however, not everyone is steaming south; plenty of fishermen are casting into fresh waters and our state agencies are working closely with them.

For the Pabst contest, Taurus Vebeliunas paddled his ultra-outfitted kayak out to where the big fluke feed and landed an 11lb. 1oz. monster, securing a first place position. South Kingstown transplant Vito Christiano weighed in a 9lb 6oz fluke at Snug Harbor for a current standing of fifth place, which means the Rachael Ann must be putting in some time outside the center wall. Gisele Golembeski, RISAA member and relentless fluke fisher, weighed one at Snug Harbor Marine at 8lb. 10oz, putting her in ninth place, just a few spots after her husband, Richard. As for the striped bass division, Vincent Vetere took first place when he weighed in a sixty-four pound bass at the Park Bay Fishing Station in Oceanside, NY, interestingly the same place Taurus weighed in his giant fluke. If you’re looking for a road trip, it’s a little less than 4 hours from here, less if you leave wicked early.

Just as inviting as miles of shoreline and open ocean, there are hundreds of fresh water streams river ponds and lakes statewide with a very active freshwater bass circuit for fishermen of many ages. While sizes may not be comparable to those big blues or striped bass, we all know the whole size thing is totally overrated and here, the competition is no less intense. Our Department of Environmental Management Fish and Wildlife biologists, under the guidance of anadramous fish expert Phil Edwards, work in unison with these contests to gage overall conditions of stocks.

We met at the 1043 acre Worden Pond, the state’s largest, for a tournament held by the club Team Renegade. Understanding that the ponds will be prospected by experienced bass fishermen, they allow anglers one day exemptions, called scientific collectors permits, from bag and size limits. These free passes give Phil and his team a good look at the biomass of the pond while fishermen get to catch as many fish as they wish. Total win win.

Nine boats from Team Renegade, which has sixteen members competing for a few dollars, plaques and lots of bragging rights, started out in the morning but by days end, only five remained. The fishing was pretty slow, which is to be expected when the water temperature is 81.3º, four degrees higher than when they started at seven am. To make things more difficult, the average depth there is only around four feet so edges and shallows can heat up quickly, scaring away bass. One great thing about this fishery, which cannot always be said about the marine side, is that it is all catch and release. 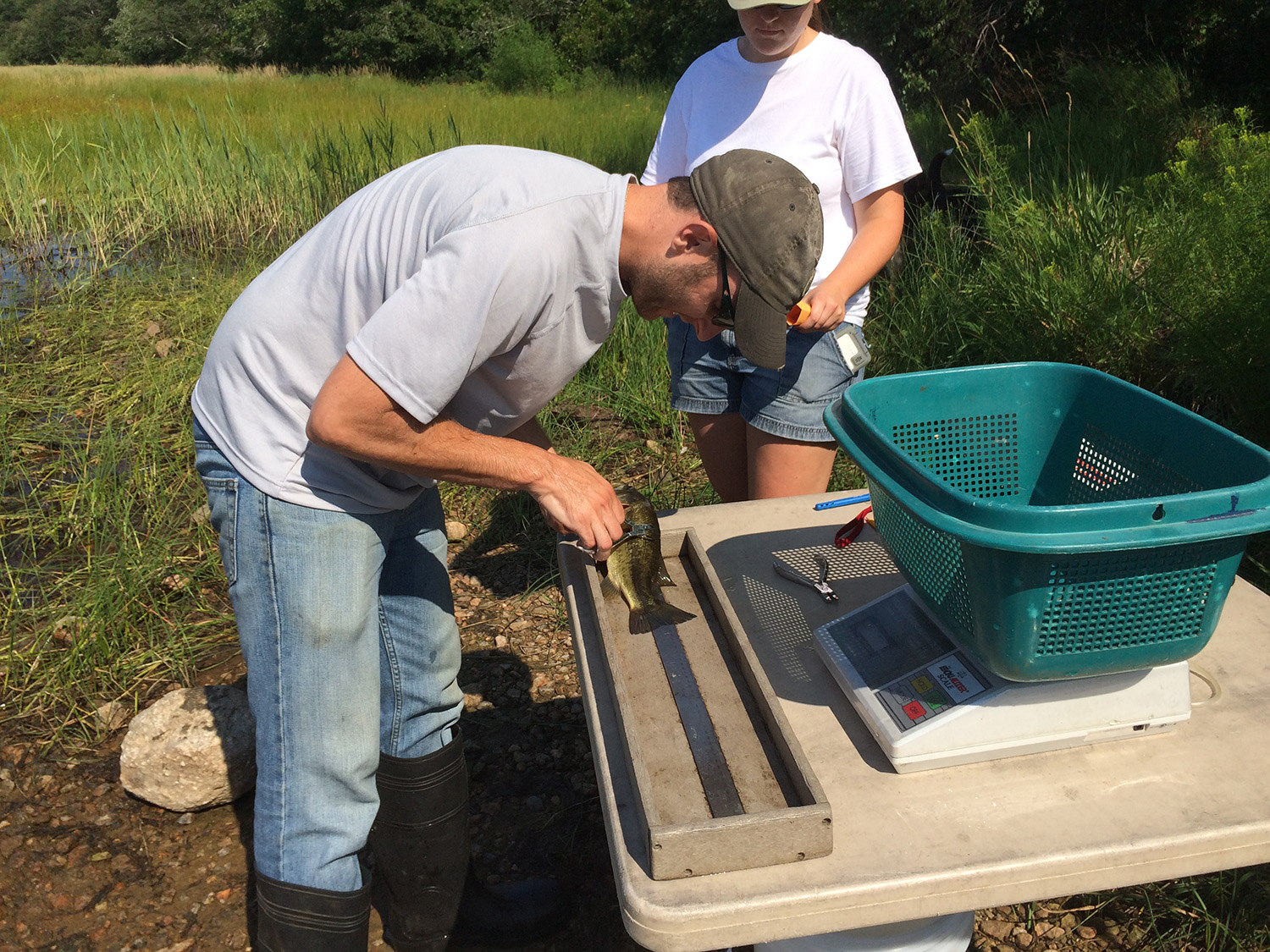 After waiting for members to weigh in for their own points system, “They are doing us a favor so we try to stay out of their way”, said Phil, biologist Patrick McGee and student researcher Hannah Fox worked seamlessly to process all the bass. Patrick worked part-time with DEM for five years, before completing his education and being hired full-time with the Department. From an aerated cooler each fish was individually weighed, measured and had a few scales removed to determine age. Scales and ear bones used for hearing and balance, called otoliths, can help determine age but removing scales is the much-preferred, non-lethal method. Similar to reading the rings on a cut tree, bass scales can indicate age and they “need a dozen scales or so” from each fish, Patrick told me. Phil added, “We get a lot of data in one hour”. Largemouth’s are cold-blooded so they grow less during the winter; a thicker ring will mark a year of growth. How each ring is placed on the scale can also determine overall length at a younger age by working backwards from its current length. Simple enough, I guess. 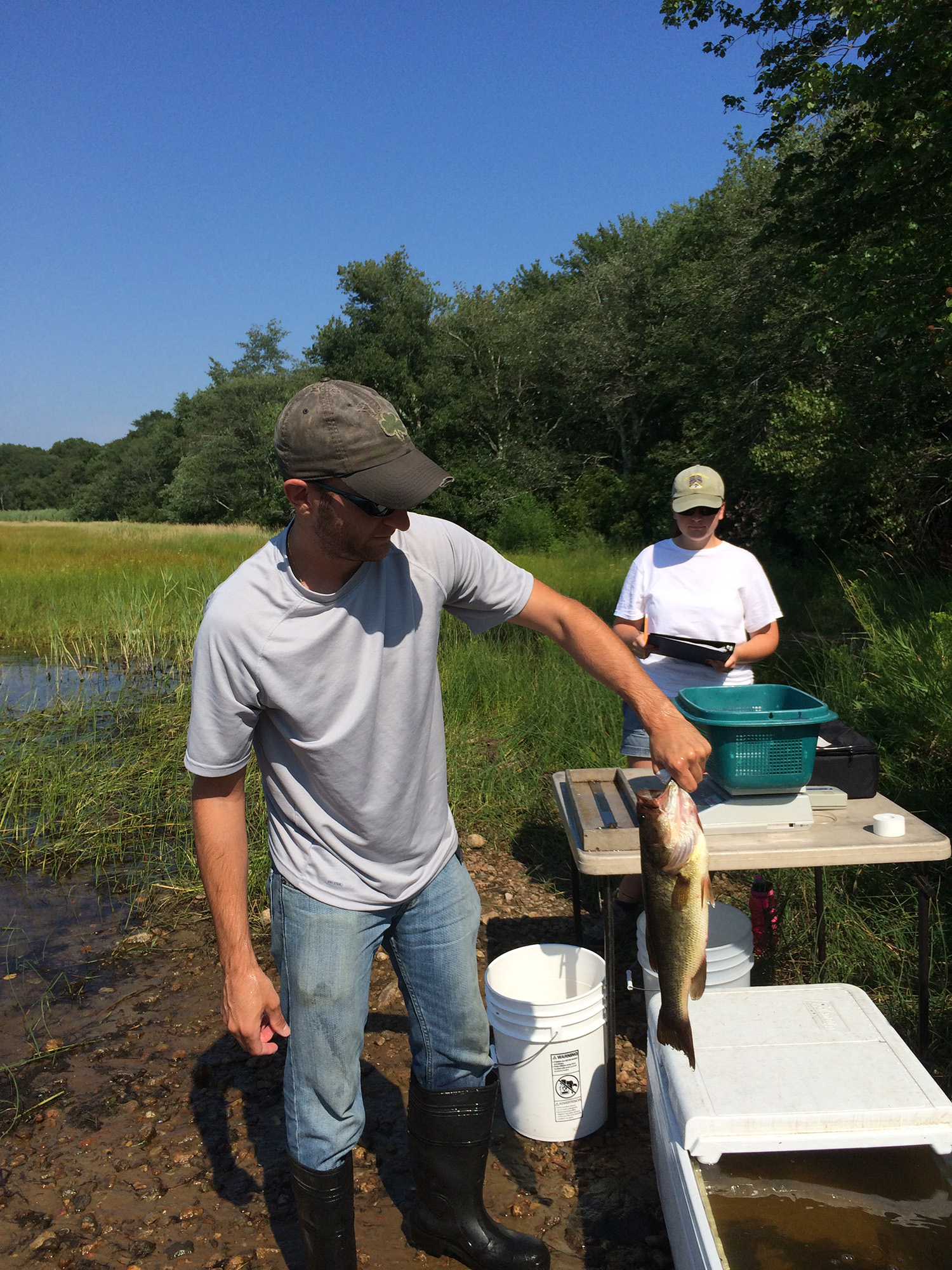 Typically a twelve inch fish is four to five years old and Presidential candidate Linc Chaffee would like to take this opportunity to remind you that converts to 304 millimeters. A 5 pound (that being 267.9617 grams) largemouth is approximately 8-12 years old. RIDEM and Phil have been collecting data from ponds and lakes since the eighties. Some nights his team will electroshock a pond to record as much as possible, from those tiny shiners to big toothy pike. This method is labor intensive so most water bodies are studied only every other year whereas working with local fishermen for 15-20 contests from mid-July until the first of November, provides them with excellent statewide data. Research is only performed after spring spawning. 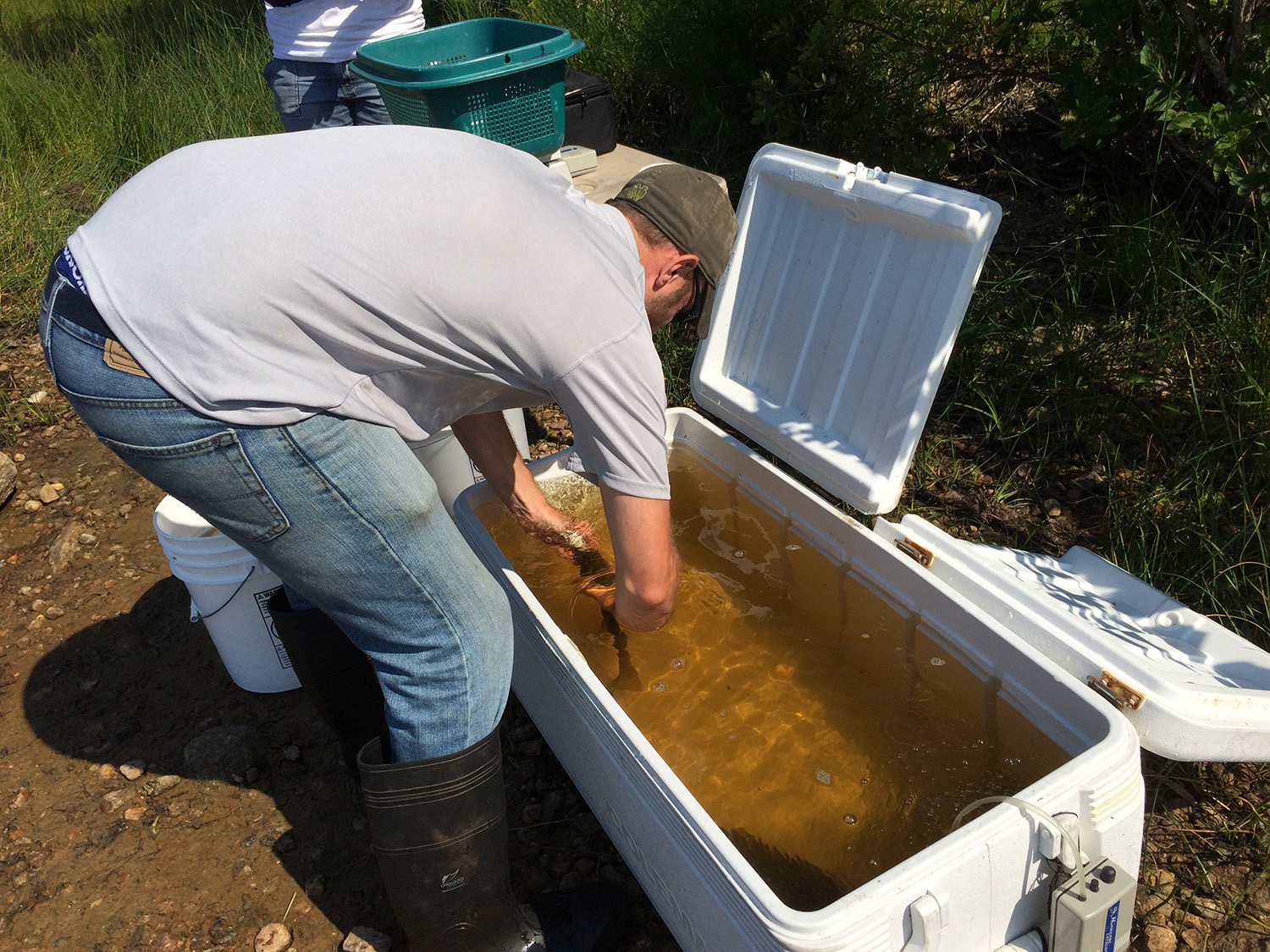 A few fish don’t survive the stresses of being hooked, held in on-board holding tanks and the inevitable hot parking lot transfer from boat to bag to scale to pond, so those fish are brought back to the RIDEM lab for further research. “The two most important things for us to learn are growth rate and angler catch rate”, said Phil. This means biologists will calculate the number of fisherman, multiply that by the hours fished and factor in all the fish landed to determine effort. All those numbers, those stacks of spiral-bound pages of measurements, all those spreadsheets, eventually get absorbed by people like Kevin. Management plans get developed for specific species based on this kind of data, plans meant to protect stocks and the overall health of the pond. He said, “A goal is to create management solutions on a pond by pond basis, hopefully in the next few years”; certainly a worthy task and one which will help our fresh waters remain rich with fish to catch on bluebird mornings. 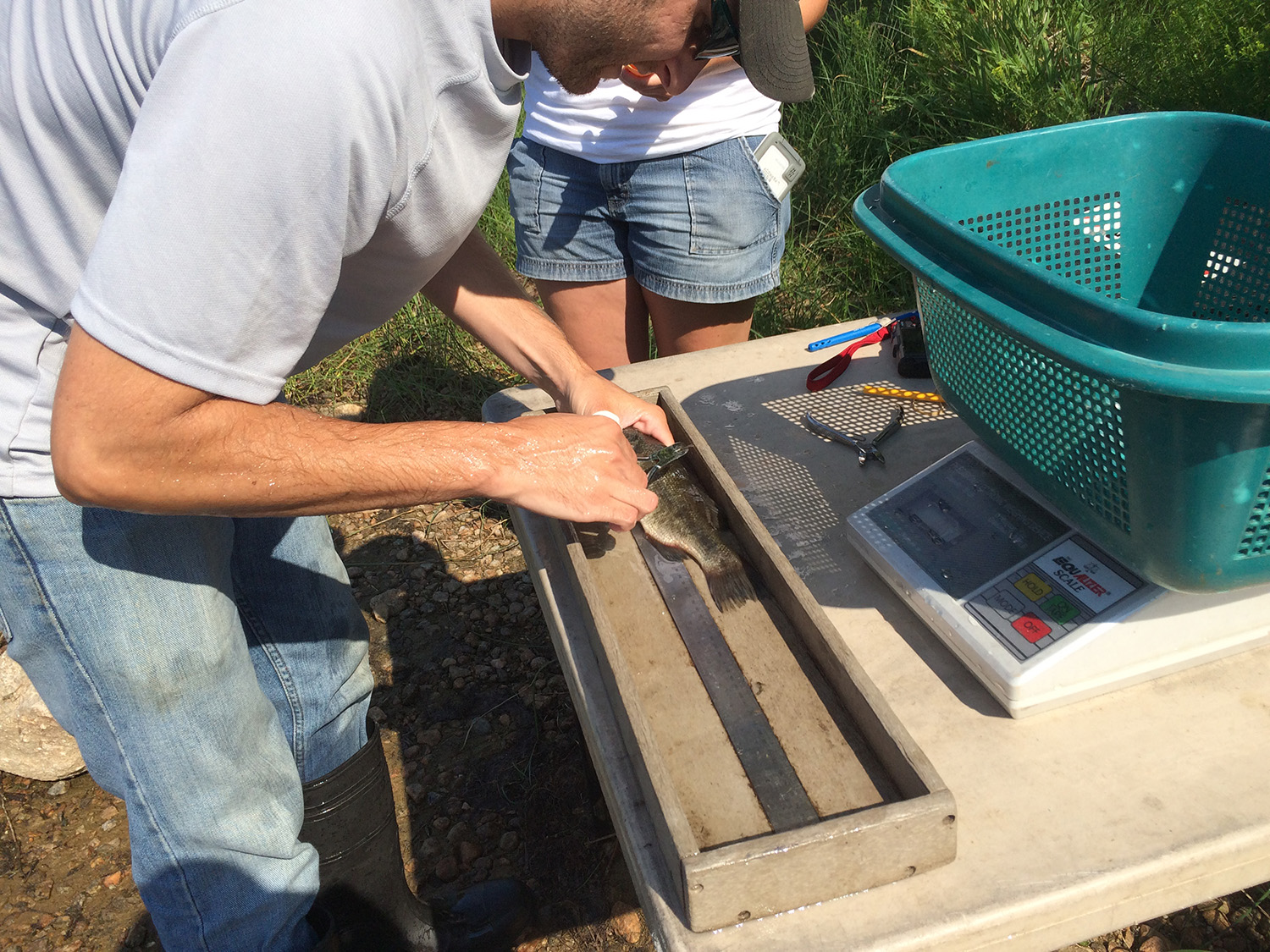 Oh what a week it was. Big national news, big warm weather, big rains and still, thankfully, more fish. November has been an easy weather month, so far, which we may pay for later on but for now, let’s talk black sea bass, stubborn bluefish, togs, squid while we...
Keep Reading

Ain’t it cool? Striped bass came into South County like rockets then left us like college girlfriends to find mates up north near the Providence River and points east. Buty they are slowly filling in our shorelines so now’s the time to stock up on the best lures to call them, catch them and release them. Andiamo!