mackerel, anchovies, largemouth and sharks. pretty much covers it…

Stripers big and small have been patrolling Narragansett Town Beach at night. Just about just after sunset, when the second shift of beach-goers file in, singles couples and families have been taking over the shoreline. It’s pretty cool to see Dad’s and Mom’s with beach chairs and PVC spikes hanging from their backs, moving kids up the beach into the darkness. Bass use that cover to swim and hunt ever-closer to the edge, trapping bait right up into the shallows. A few weeks back veteran surf caster Mike Yarworth had stripers tearing through piles of baby menhaden in one foot of water right at his foot. Narragansett beach from the seawall to the Narrow Rivers mouth is full of small depressions (not the kind you get from having to pay to park or walk through a chain link fence to access your beach) where bait try to hide. Soaking a big hunk of pogey or mackerel on a circle hook may be your best bet.

Speaking of, piles of mackerel are being reported all over the south coast. Most fishermen are seeing smaller fish, what we have nicknamed tinker mackerel. These are pelagic, schooling fish with approximately thirty different species in their genetic family, Scombrini and their return is a really great sign for fishermen. Being rich in omega-3 oils, they are prime targets for bluefish, larger mackerel, codfish and stripers. The smaller fish are easy targets for organized pods of whales and dolphins. Those of us who still talk of “back in the day” are anxious to pass a few through our smokers. Seeing them in our local waters hopefully is a signal that shore fishermen will have a better year than last.

There have also been reports of anchovies, which is even more good news. Bay anchovies, Anchoa mithillia, are common in waters from Maine to the Yucatan Peninsula and are the most abundant fish in the Chesapeake Bay. Since much of our striper, or rock fish, stock breeds in those waters, it’s some easy math that bass will look to feed on a favorite forage fish. They live for an average of two years, sometimes three in positive environmental conditions, growing to approximately four inches. Anchovies prefer shallow waters and areas with bottom structure, can congregate in large schools, feeding on zooplankton and fish larvae, which can cloud shallow waters and a real bear to fillet.

Anchovies can easily be confused with Atlantic Silversides, which according to Save The Bays’s The Uncommon Guide to Common Life on Narragansett Bay, is the most abundant fish in Narragansett Bay. Both fishes share that translucent green coloration but silversides prefer areas with submerged grasses while rarely inhabiting waters more than a few feet deep except during the winter months. The silversides mouth is also slightly smaller. Bay anchovies are a favored food for weakfish, striped bass, mackerel and bluefish so several companies have recreated their size and shine for our sport but the reliable Castmaster always works well when targeting their predators.

don’t be messing with my ‘gansett!

South County local Jon Dodd recently steamed south of Block Island to fish from his boat, Cricket II, the same boat once captained by Frank Mundus of Montauk shark fishing fame. Some twenty miles south of the island, a mako took hold of their whole bluefish bait and ran for forty-five minutes. During the fight it jumped out of the water twice before first-time shark fisherwoman, Olivia Novello, finally being reeled it in. After being hoisted and weighed in at 278 pounds on Montauk’s Star Island, Jon dissected it to determine the contents of its stomach. According to Jon, he “found a bluefish, a dogfish shark and a blue rubber glove. It was quite a treat for all the onlookers at the marina”.

Jon has an extensive background in shark research and was part of the team which saved Jameson, the seven foot great white, a few weeks back from being stranded on a Chatham, Ma. beach. He fished with Captain Mundus and still occasionally wears his   famous shark necklace. Captain Mundus was the subject of Russell Drumm’s book, In the Slick of the Cricket, and Frank was the unacknowledged inspiration for Peter Benchley’s “Jaws”. There is much more to those stories and we hope to share more with you in a few weeks. The take home short story long is that Jon knows his sharks and we have a lot to learn from him.

For the salt water-shy, the RI Bass Nation will hold their 5th Trail event on Sunday at Long Pond in Lakeville. 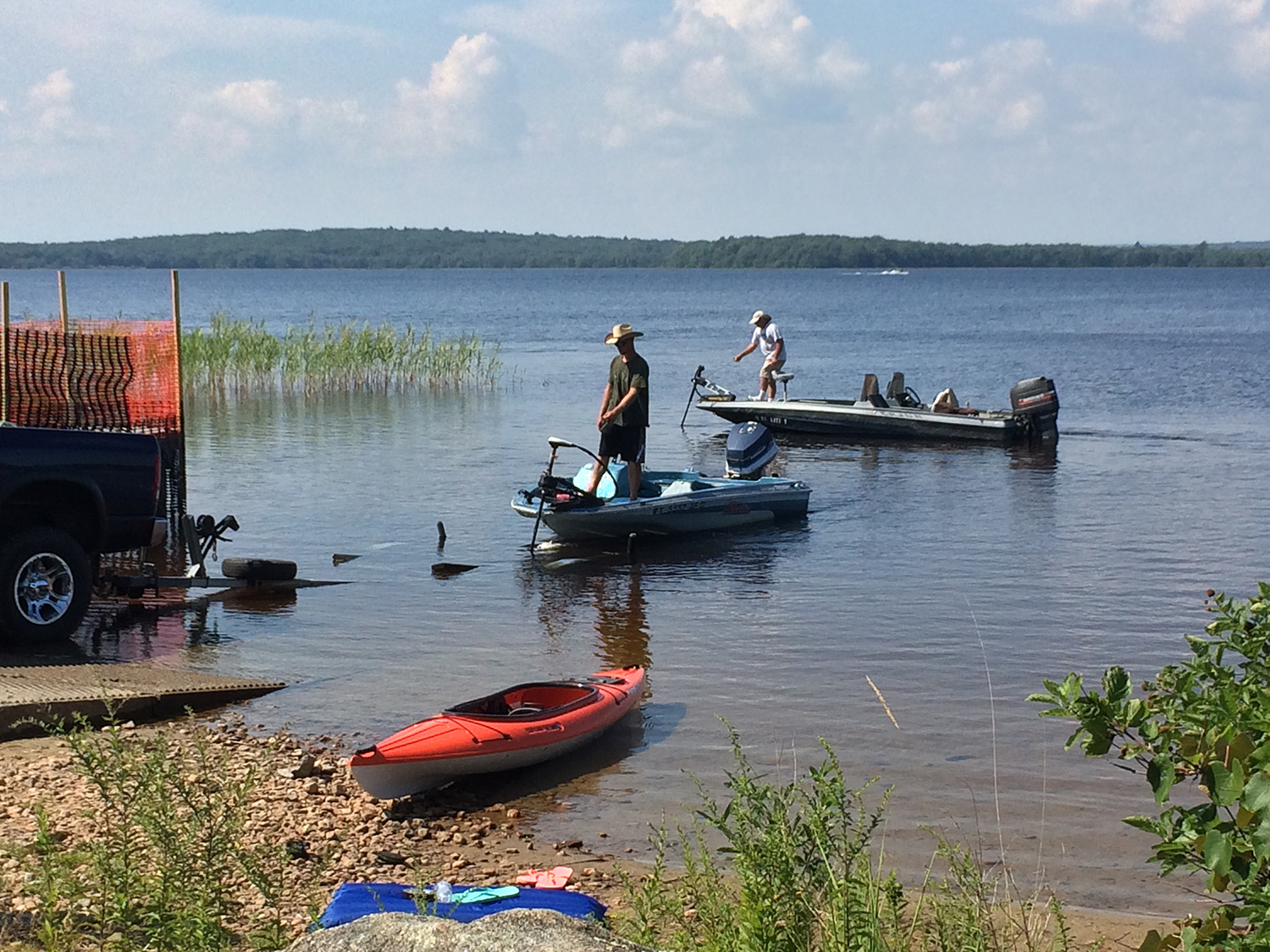 st into different water bodies all summer, building points and bragging rights. And all the fish are returned, which is excellent. If you are unfamiliar with our states very active fresh water bass fishing teams, you can check out a weigh-in at 3pm tomorrow at South Kingstown’s Worden Pond. RIDEM biologist Phil Edwards will be there with a few volunteers to see what was caught, then weigh and measure them to build a database of the pond’s stocks. According to DEM’s Gail Mastrati, the dock there is roped off for repairs but the ramp is still open. Personally, watching these guys unload their bags full of 5 and 8 pound largemouth bass from spots where I swore, absolutely swore there were no fish can be a little disheartening but it is also really cool to see how fine our local guys really are. This state has enough issues, enough for a subscription, I would say, but we are blessed with our rich resources, shorelines, fresh waters and state agencies, like DEM , working to keep them safe.

This post originally appeared in the Southern RI Newspapers two weeks ago. As is known to happen, we fell a bit behind here and should have posted this sooner. Air and water are cooler now but the pressure is definitely not off the fish. So it's still pretty relevant....
Keep Reading