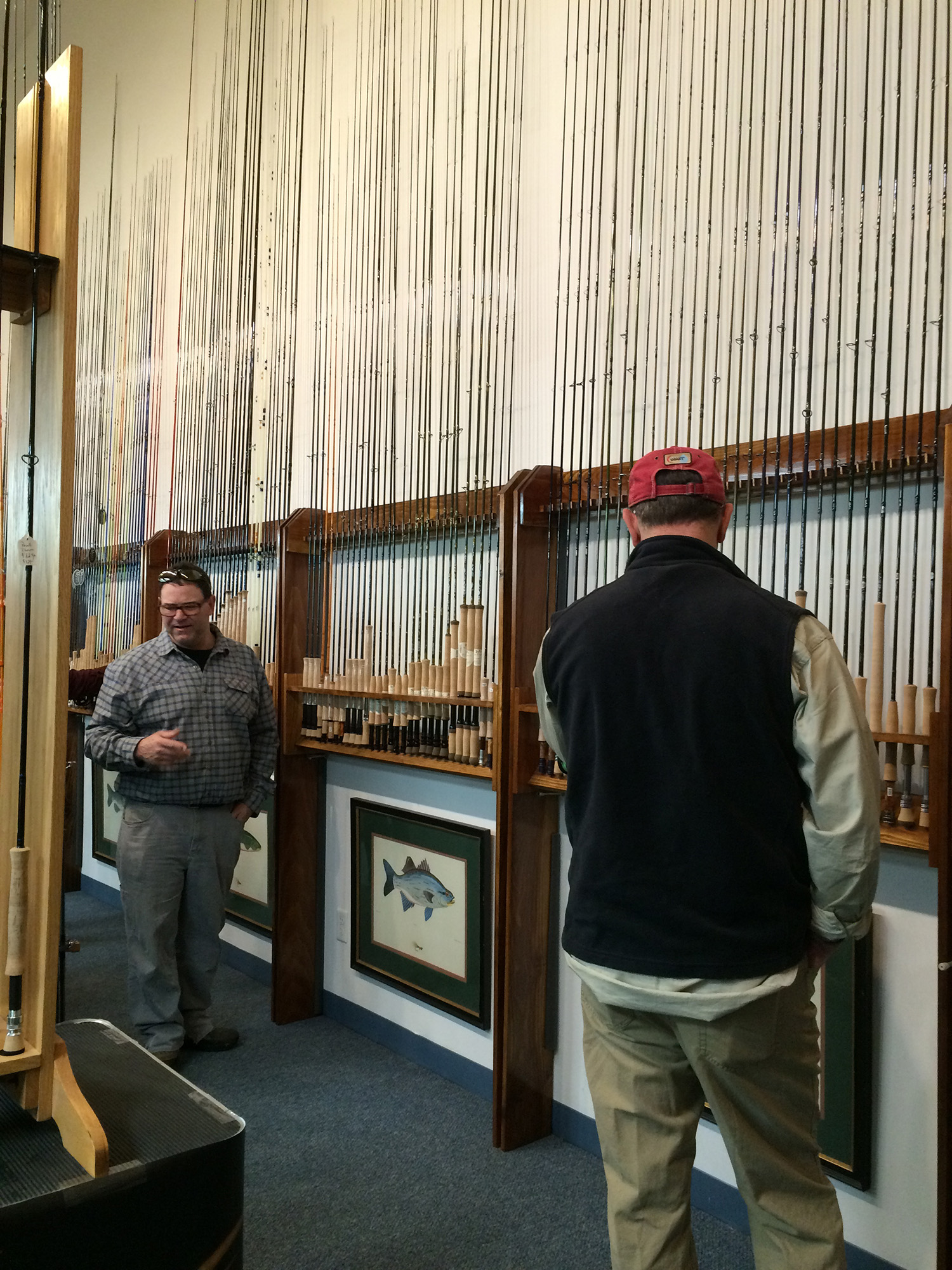 this fish wrap column originally ran in the ri central family of newspapers on friday, february 26

February is the height of fishing show season and this weekend is the big one, the 13th Annual New England Saltwater Fishing Show at the RI Convention Center in Providence. Jigging World is taking up a few booths this year, as are many businesses, which really shows how powerful this show is for getting products and services noticed. Although for some reason our perennial favorite Worm Bar has decided to skip, the show will go on with other excellent vendors, like The Saltwater Edge, Snug Harbor Marina, Beavertail Rod & Reel and Narragansett Brewing. Plus, the curiosity factor for businesses like Fish On! Motel, Old Colony Amphibians, Fork Length Fashion, Massaging Insoles and the blandly titled Interesting Items (booth 0107) are worth the drive. Did I mention Narragansett Brewing will be there? They are set up in the back of the big room in a perfect spot to lean and take a long look at all the skiffs and center consoles you know you need. The show runs all weekend and Sunday is Family Day so women and kids under 12 are admitted for free.

Way up in Taunton, the Bears Den Fly Fishing Shop held its 18th Annual Expo this past weekend. Considering the dozens of high-ticket raffle items, big name supporting vendors, buzzing retail operation and on-site Mexican food station, it really is an impressive show, plus, it’s brilliant: create an event with enough demand that you need busses to deliver all your potential customers. And pile in by the hundreds we did. 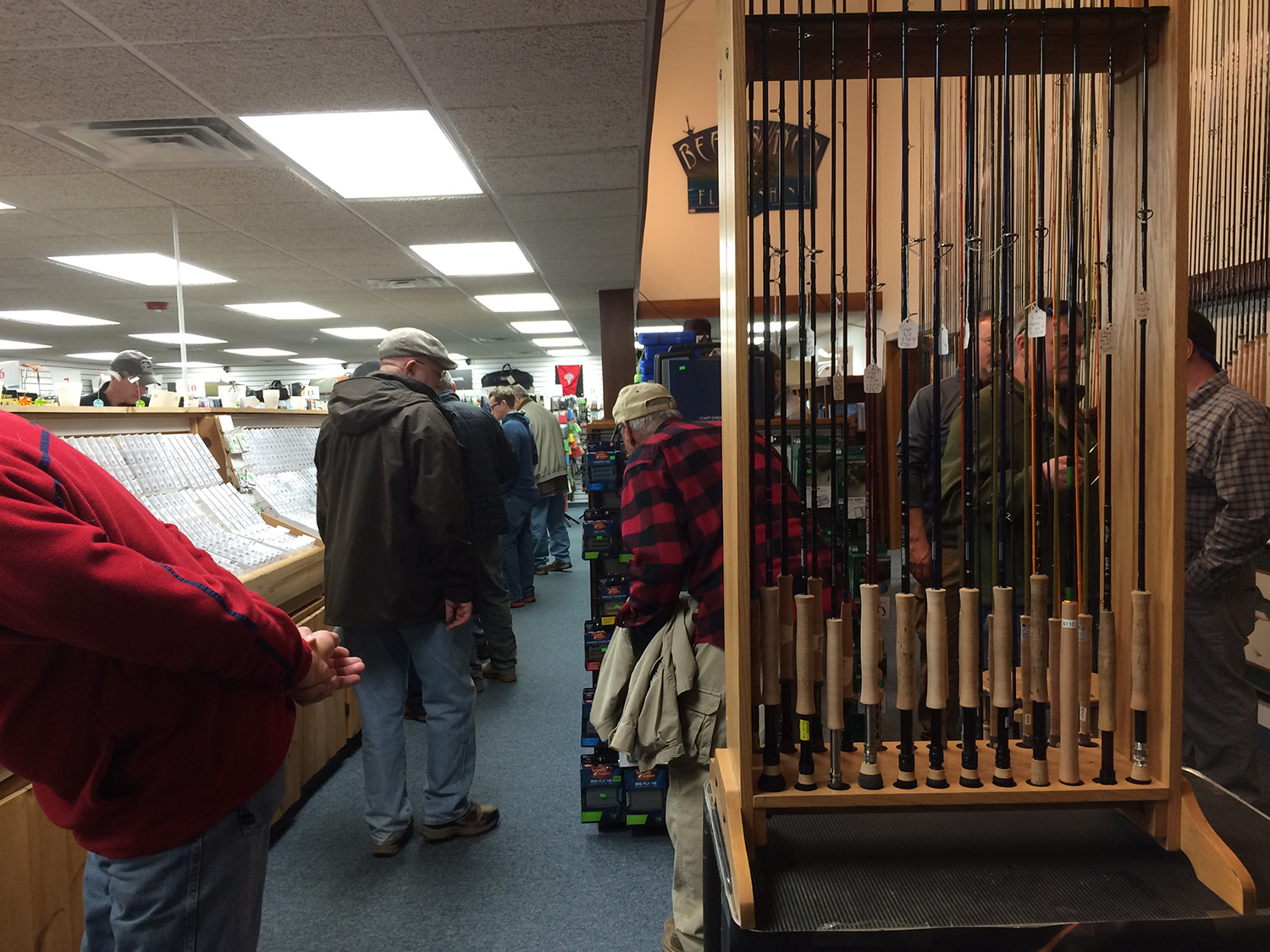 young and old showed up to see the show

Warren Winders and Geoffrey Day represented the important Sea Run Brook Trout Coalition, www.searunbrookie.org. They are some of the group’s founding members and deserve solid praise for years of determination and hard-won successes protecting waterways critical to the survival of salters. Warren is a top notch fisherman whose first love clearly is the waters themselves, especially when they are unhindered by dams. Remember meeting someone new, having a nice conversation about this or that, then walking away realizing they never dropped a name or started a sentence with “I”? That’s Warren. It’s a rare and mysterious event these days, with the whole selfie foolishness and people making a million selling us sticks to provide an even better view of ourselves. Warren is a guy who I suspect could wade into a quiet piece of shallow water, find catch net and release a fine brook trout and not think to tell you about it that night.

3 tand was represented at the bears den show

Fly fishing specific shows offer a glimpse into this passive riverine alter-universe. A large percentage of fly guys are very passionate about their sport, their art some might say and have a real effect on the spin casting community. Guys who spin fish often think that fly fishing is too much: too much gear, too much money, too much time squinting over a tiny vise, too much confusion over dress codes, for flats fields and streams, too much special clothing in colors that aren’t even colors like rain cloud, sunlight, desert green-I thought deserts typically were pretty brown- morning gravel, canyon or organic lemon zest, and trout nets made from 78% 500# mono reclaimed from tangled lobster gear pulled from North Carolina beaches by hippies who can’t afford Spring Break in Florida, with 18 zippers and clippers for zingers for nippers and tippets. Then there is the whole Patagonia/Orvis/Sage/Thomas & Thomas realm, where money becomes almost irrelevant, unless you don’t have enough of it. R.L. Winston offers a nice 4 piece weight Spey rod for $845. Dollars. It does, however, come in a sock with a logo.

Fly fishermen don’t carry the same burden of comparison with the spin group, they just wade out in a stream or salt pond, adjust their stripping basket, use their 2.5x fold down magnifiers in limited edition Galapagos tortoise pattern with all proceeds pre-taxes going to a Himalayan river charity to triple check their acorn sling pack for trout camo hemostats and Hy-Flote, then get onto the business of false casting.

However, the reverse deal is that fly fishermen tend to be very accommodating to the rest of us, and I speak from personal experience, amiably offering advice or hand tied flies when a stream side correction is required and that’s admirable.

It’s apparent there’s apparel you need to wear to shows of both camps, although there are different schools of thought on whether to sport a cap from your local fishing club or a fleece vest, in western old growth cedar and spruce forest pattern of course, from the farthest place you ever fished, or at least visited a bed and breakfast that was near the stream. Spin fishermen tend to be the jeans and t-shirt crowd, often with very clever use of the word “hooker”. To borrow from biker parlance, it’s a lot like showing your colors.

Speaking of, Grant White from Cheeky Fishing was just to stage right of a very loud close-up screen of someone quoting Wall Street wisdom as he tried to help a room full of eager apprentice fly-tiers learn how to create something the size of a gnat. May 21 is their 5th Annual Cheeky Schoolie Tournament and although registration for the two man teams is over, Grant is hopeful the entry window might be pretty open for being closed; they want to get as many waiting list people involved as possible. The Cheeky line of locally designed reels, from a 2-4 weight to the large arbor 12-16 weight, are available in a host of colors, which at first blush may seem like a simple sales scheme but they have the quality to back up the fun colors. Lots of people jump from corporate ships to find their inner streams which does not always compute to reel success. In the Über tight world of fishing gear, Cheeky looks to be a company to watch. 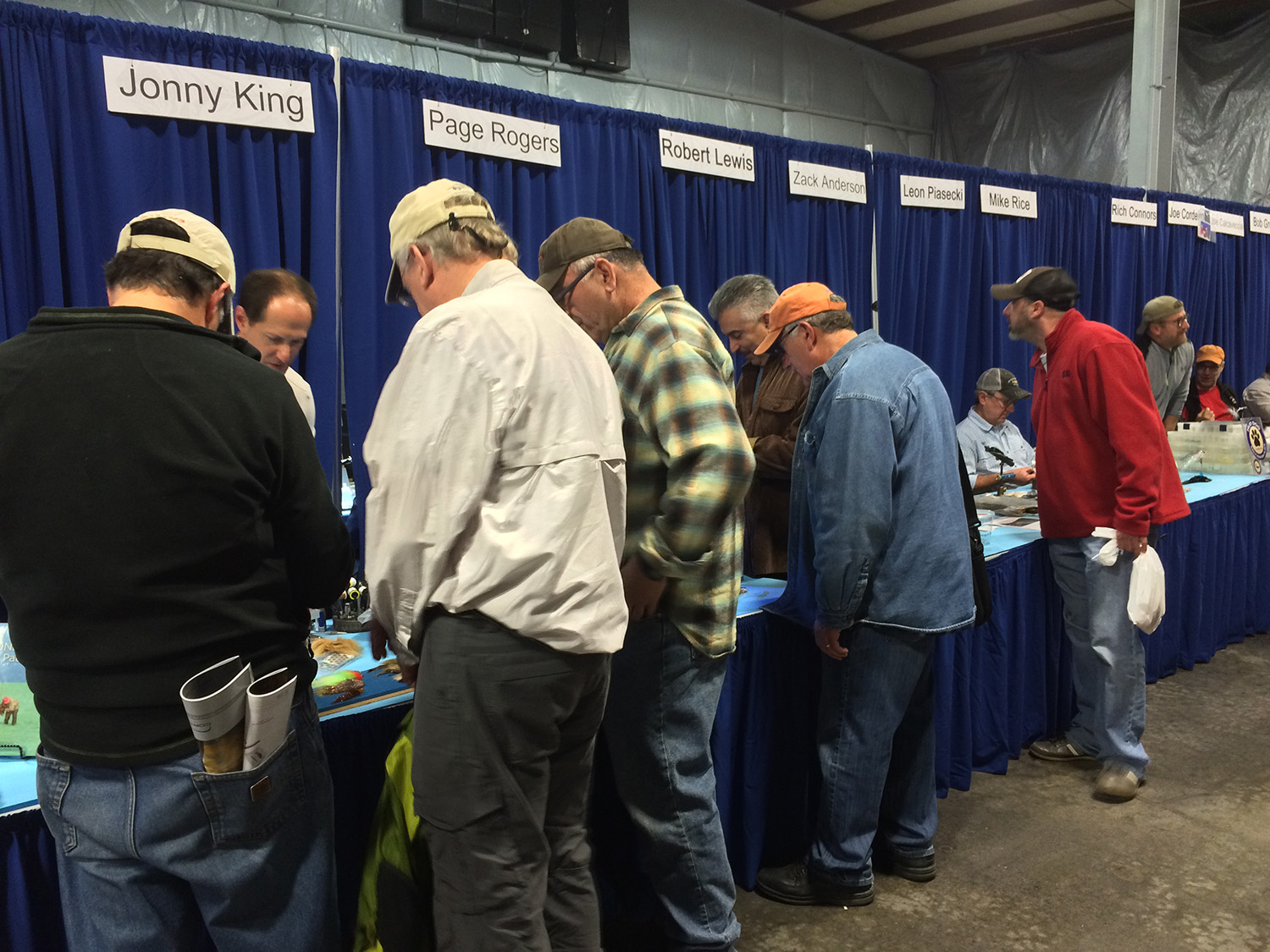 fly tyers are a big draw at the bears den