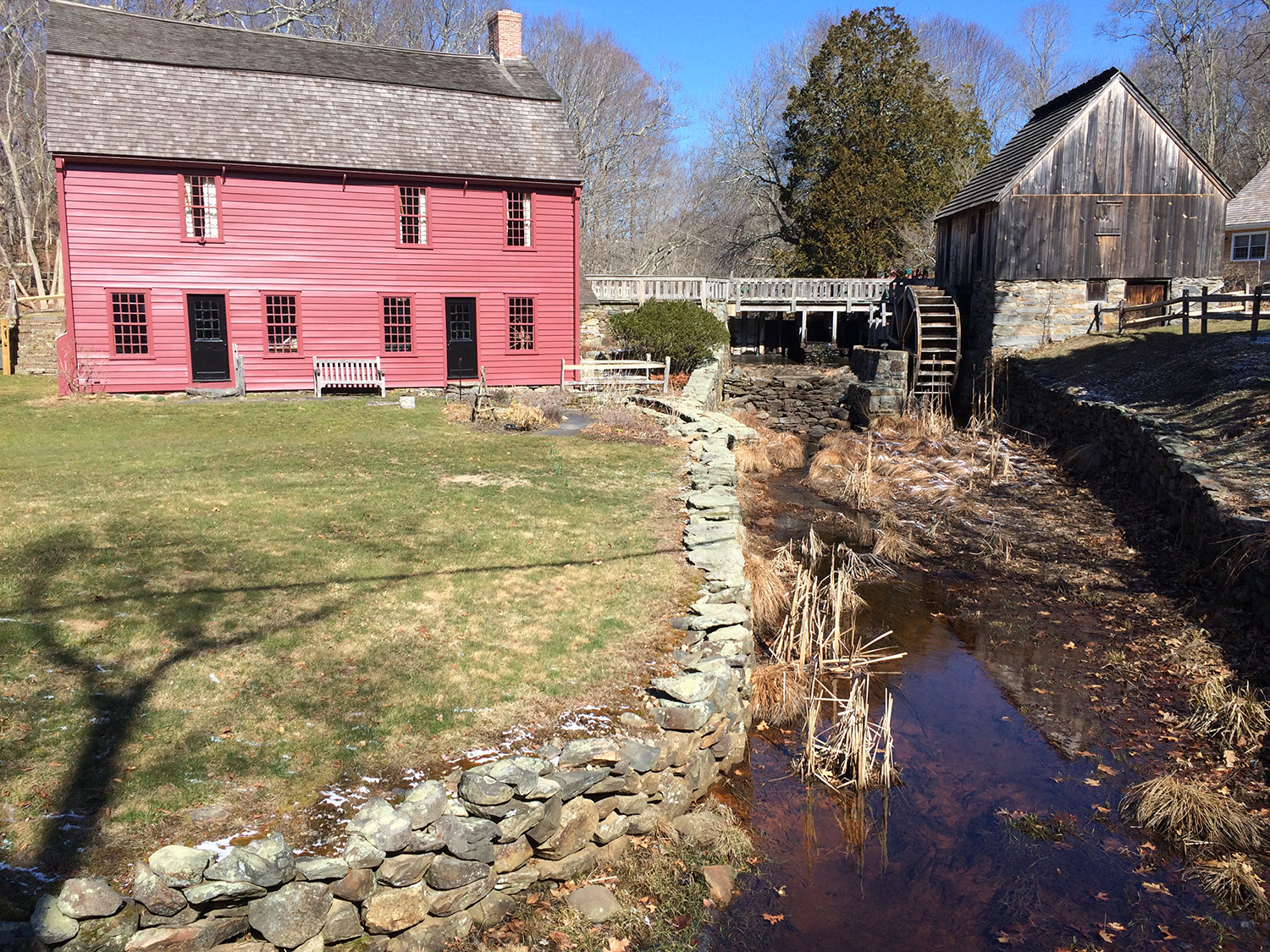 Gilbert Stuart, just ahead of Card Pond where buckies spend the summer

Couldn’t wait to tell, that Bill McWha, South County’s ever observant riverkeeper, about the first arrival of alewives. A few river herring have survived their migration and are running the incoming tide just south of North Kingstown’s Gilbert Stewart museum. They should be two or three years older than when they headed for sea after a long summer in Card Pond and now are returning to complete their cycle. Before the tourists flood in and police resume enforcing prohibitive signage, this is a wonderful time of year to walk that road and small stream which connects Pettaquamscutt Pond to the water wheel and fish ladder. If you have the time to paddle her in a canoe or kayak which won’t be bothered by a few new bottom stripes, you can travel downstream from cold fresh waters by the snuff mill to the head of tide where salt intrudes and ragged tan bottom comes alive with wild oysters, first occasional then prolific. Starting your voyage on a higher tide will help float you over the larger rocks. Here’s to a tremendous year for our favorite forage fish.

The Protect Rhode Island Brook Trout group held a meeting at URI’s East Farm last week in another effort to reach out to the State and some local NGO’s. Their years’ old proposal to temporarily suspend stocking non-native trout in the Upper Wood River for 5 years is contentious to say the least but for those benefiting from a big-picture mentality, there are real positives to their plan. The greatest threat to our fishing in the Upper Wood may be our fishing in the Upper Wood, which might be hard to get your head around at first blush but the message is clear as sunrise: our heavy use of those wonderful woods and waters is having a negative effect on the very nature we seek. River banks are eroding, gravel is suffocating, trout are losing habitat, a few of those wonderful back roads seem ready for traffic lights. These guys are saying too much of everything is not just enough and the place needs a break. It eeds to be properly studied so scientists and the State can have the data they require for any real consideration of permanent regulation improvements. Those wild native brook trout could use some time apart from hungry or amorous rainbows and browns. You can read their plan at www.protectribrooktrout.org.

Speaking of trout, there is a fine new movement gaining momentum called “keepemwet”. History is perhaps our greatest teacher so looking back at “normal” practice can help us see what we didn’t back then. Catching juggling photographing and releasing fish, possibly, is often what happens out there; these guys are encouraging us, especially in a growing age of environmental and stock awareness, to reconsider the process. The mission of founder Brian Huskey is to present fishermen with a series of best methods to handle fish we intend to release. He coined the phrase back in 2010 and it’s a testament to the power of the interweb and all that social media that his hashtag and passion has grown so quickly. 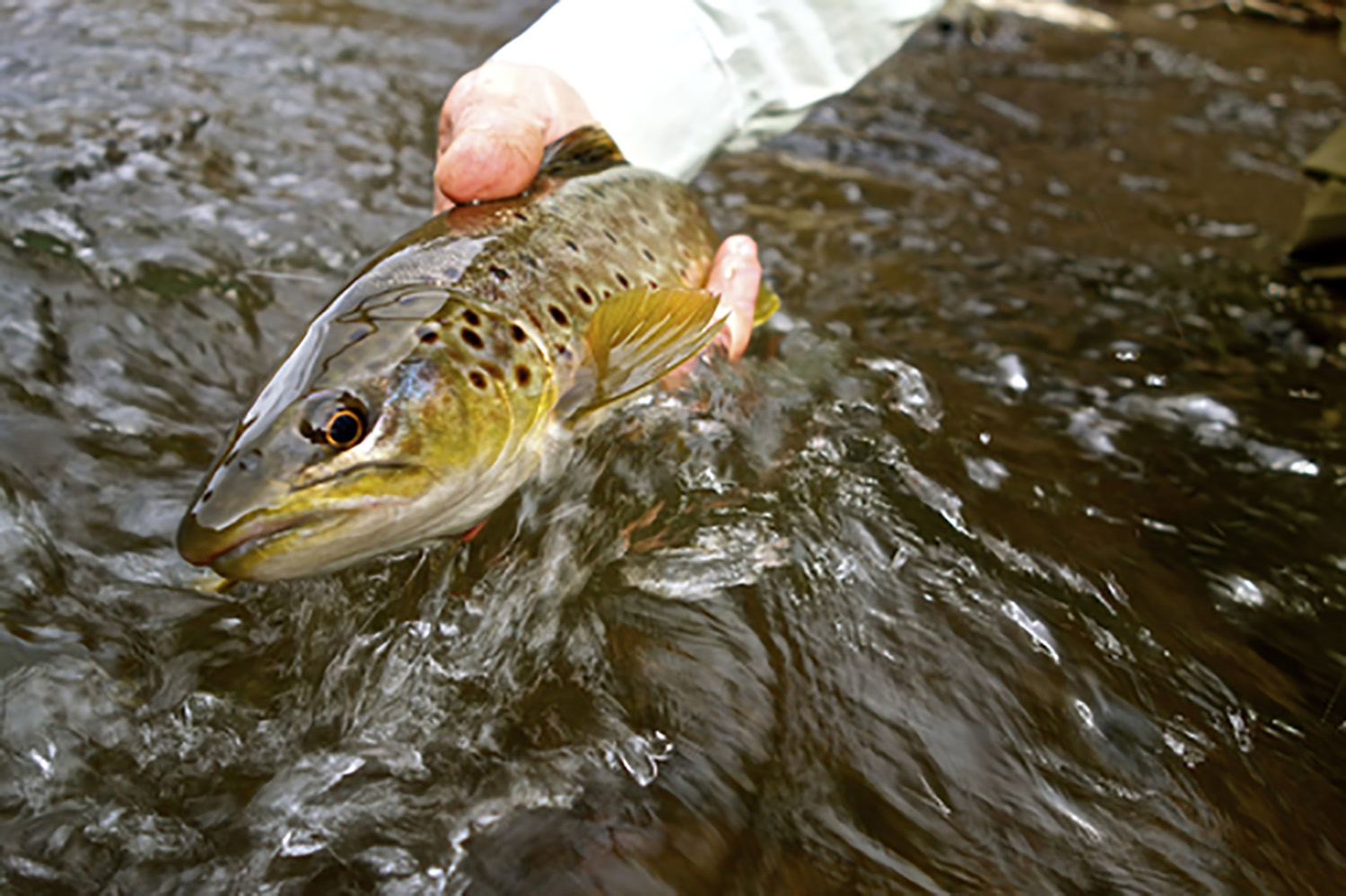 Hauling a big striper out by the gills or tossing a twitching salmon up on the bank so you can fish around your pack looking for the Instamatic doesn’t do much for the fish’s survival. Even after they get Bill Danced overboard, stressed fish can suffer from low oxygen absorption, physical injury and possibly even reduced fertility. Ouch. Keepemwet advocates for, among other methods, low fight time, photographing your catch while still in the water-hence the #keepemwet- using rubber nets and taking a few minutes to revive the fish before releasing them post photo shoot. Much of this information is intuitive to seasoned fishermen but in the spirit of big changes, like banning felt soles and powerwashing boat bottoms before changing ponds, we always have something to learn, even when it’s obvious in hindsight. You can read more at their website, www.keepemwet.org.

For those looking to do or learn more about rivers streams and fishes, the Commonwealth of Massachusetts is looking for help surveying their 30,000 road-stream crossings. Existing crossings, functioning or not, can be serious impediments for fish, animal and aquatic organism movement as well as often prohibiting proper bed development for flora. The River Continuity Partnership is a collaborative effort with the Commonwealth’s Department of Ecological Restoration, the University of Massachusetts Extension, The Nature Conservancy, and a few other nonprofit and agency partners. They will train you to be a lead observer or a coordinator under the auspices of the North Atlantic Aquatic Connectivity Collaborative. There is a brief on-line course to take followed by some time with team members and a few hours shadowing experienced observers. To get started, email Carrie Banks at carrie.banks@state.ma.us or phone her at 413-579-3015.

A reminder, Rhode Island licenses expired last month so you will need to re-up before heading down to the shore. Additionally, most trout waters are closed to fishing from now until Spring’s greatest day, the opening of trout season on the second Saturday in April. Ponds rivers and secret spots will be stocked, jars of Powerbait worms and bobbers will be packed into wader pockets and anything that floats will be launched to welcome a new year of fishing and story-telling. There has been no real ice to contend with so warmer waters should help the bite. Trout season, alewives, digging worms alongside yellow daffodils, real reasons to buy a new rod, maybe a largemouth on a fly, the first sign of hungry stripers in the salt ponds: all the indicators of a long overdue Spring. Can’t wait.