The last few weeks of May are absolutely packed with anticipation. Route 1 carries a steady load of trucks trailers and boats, sticky windows in Green Hill and Matunuck start to open in cottages suffocating in the shadows of castles, small boats run the tides in salt ponds and channels, retired uncles get back to the business of digging clams and no parking signs quickly reappear near boat ramps. No season brings welcome changes quite like Spring in New England.

Small bass and a few keepers are now being caught at the mouth of the Merrimack River and as far north as southern Maine. The Charlestown breachway, like most of southern RI’s rock walls and rocky outcroppings, is holding small stripers in the twenty inch range. Outgoing tides seem to be better right now with preferred baits of white or pearl Cocahoe Minnows or the five inch Yum! baits in the same colors with the benefit of a small jig head. In most situations, we’re still in the “low and slow” realm as the vast majority are young fish. For the dedicated, reading reports from the Delmarva Peninsula to the canal is better than any television show because we know that each day brings an increase in our chances to catch that first keeper of the year. 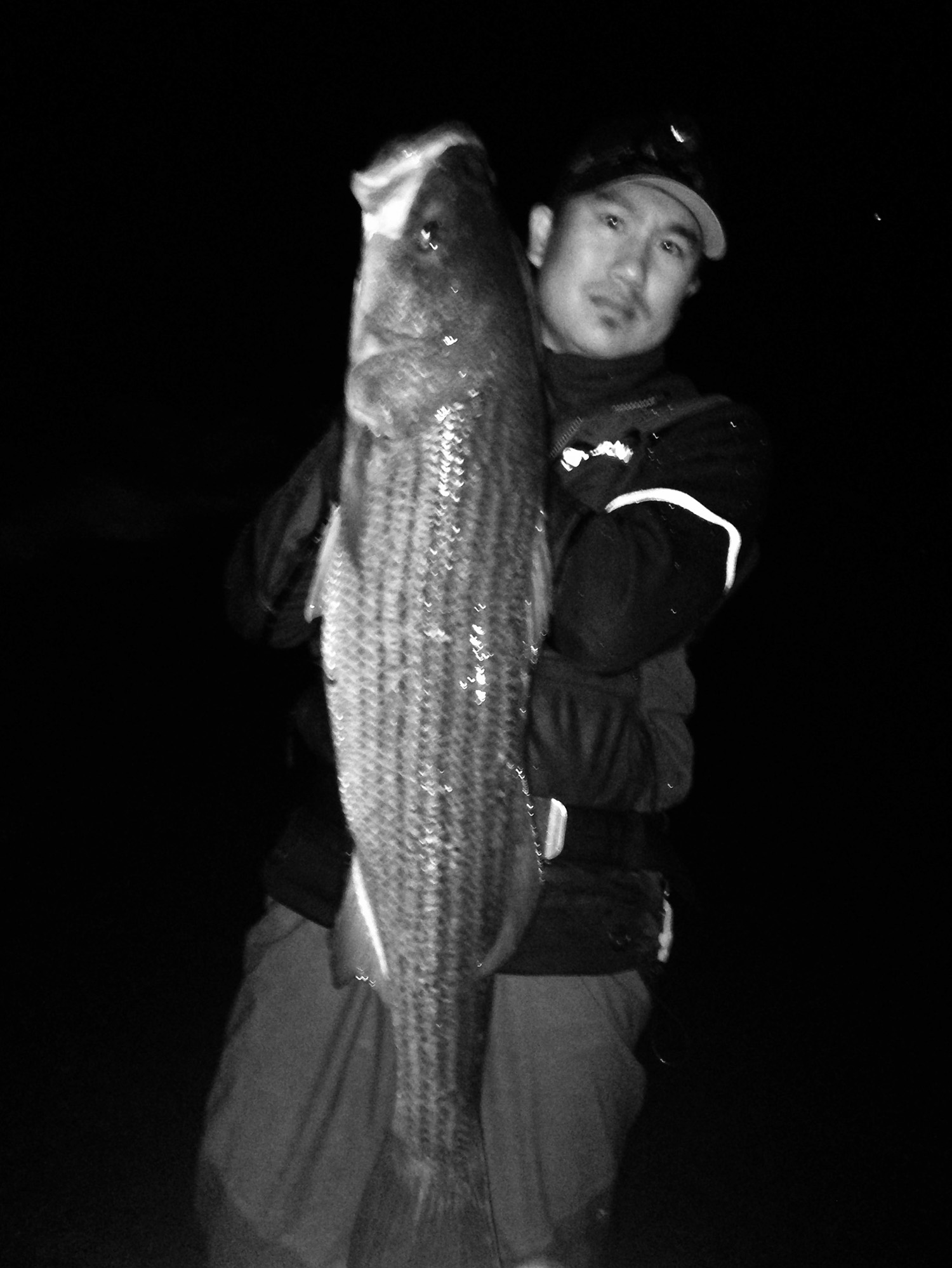 Stephen Yang with a beautiful striper

Stephen Yang, a local born, mathematical, analytical fisherman, who brought the fineries of timing, flow dynamics and reverse logic to bass fishing, the same school teacher who traded the blinders of being driven for the biggest fish for the purist pursuit of developing a careful plan to outsmart any fish, has reminded us that bass do not necessarily stop feeding at the end of a tide. He believes they just re position for a better look at the new flow lines and will use the calm water, therefore expending less energy as they are wont to do, to ambush bait looking for their own new area of protection. He’s caught a lot of fish in all sizes so he may be onto something.

Elisa at Snug Harbor Marina reported a better week for fluke south of the island and an increase in the number of keepers and commercial draggers, which hopefully means squid are moving back in consistent numbers. From now until the end of the year, state regulations for fluke are 8 fish per day with an 18” minimum length. Freshwater fishing is really fine. 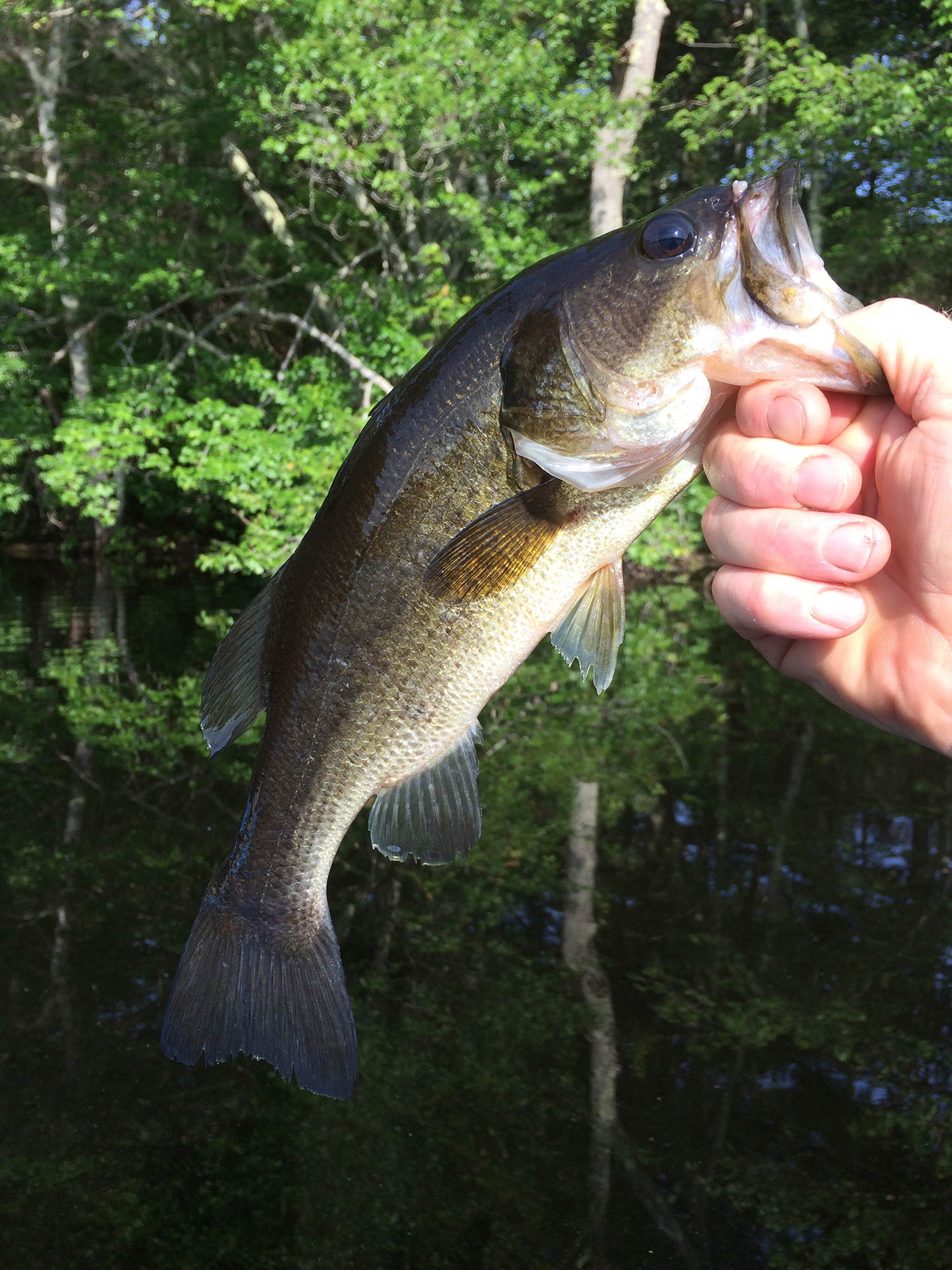 Largemouth are building nests in warm shallow water in preparation for spawning. Bass and crappies have been feeding on tiny inch worms dangling from overhanging oaks and maples so matching them with bright chartreuse worms fished slowly may be the ticket.

The Rhode Island Saltwater Anglers Association has filed an amicus brief with the RI Supreme Court in support of the RI Attorney General vs Barbuto case, joining forces with Save The Bay, The Surfrider Foundation, Clean Ocean Access and Friends of the Waterfront to defend and protect the public’s “right to access, use and enjoy the state’s coastline, specifically along the shoreline bordering Atlantic Avenue in Westerly”. RISAA’s involvement goes back to 2011 when they opposed the actions of some landowners along a 2 mile length of beach, remember please we are talking about the beach, which runs from the Weekapaug Breachway almost all the way to Misquamicut State Beach. These defendants feel their property extends to the mean high tide line and the fences are to keep keep us common folk from walking freely down the beach. There are legal right-of-ways to the shore but fencing, signage and their pacing the windows, phone in hand, reminds us we are welcome to use only that eight feet of easement.

Welcome to our beach, now get off it. Photo courtesy of CRMC

“We are showing our support for the case”, said RISAA President, Steve Medeiros. This appeal is based on the prior Judge’s ruling in favor of the landowners which the State feels did not adequately review and consider original plat maps, historical photographs and other pieces of evidence which collectively show that individual parcels of land did not extend all the way to the mean high tide line. The State holds that the beach was always meant for public use. What a concept.

Attorney Bill Landry was pleased with the court’s past decision to keep us off the beach. In a great piece written by Will Collette, Landry stated, “It has been an ordeal, many of these people are just normal families that made life decisions to purchase these properties”. Huh. They’re just normal families who vigorously defend “their” beach with snow fence, signs and calls to the police for people trespassing. It is their belief that people who want to walk on, fish from or just enjoy the shoreline are trespassers.

The case and appeal are worth following; you can learn more by searching RI Attorney General vs Barbuto. Supporting and defending the common right to access and use the beach is where RISAA really shines and their 7,500 members are a solid voice. If you have the means, they are worth supporting, even by simply joining the group. Common in cases such as this is the clash of emotion and law, real or interpreted, especially when you consider the personal and taxpayer-supported resources being expended. This case is all about greed, undeserved protectionism and elitism. I wonder if a storm washed away the houses, would these landowners apply for federal, taxpayer funded assistance to rebuild after fighting so hard to prove the land is theirs and only theirs?  This case also begs the question, ”Who the hell fences off a beach to prohibit people from walking the shoreline?” Is it that important to fight off the scourge of beachcombers, sunbathers and God forbid, the occasional surfcaster walking on the beach? What a disgrace.