Captain Jerry Sparks Guides Us Through the Cinder Worms 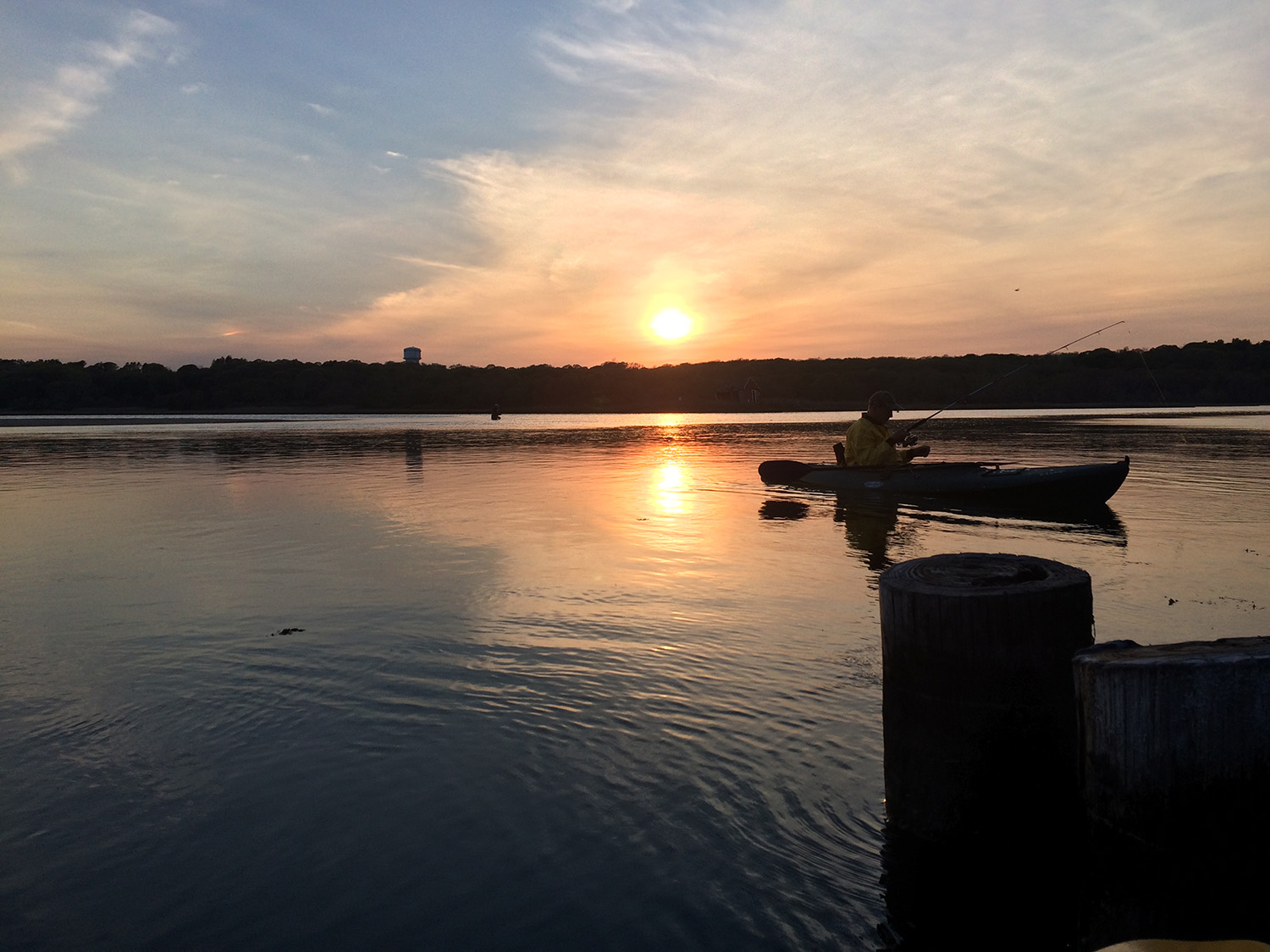 the cinder worm show can go all night

It’s one of the most exciting, challenging, rewarding and frustrating fishing events of our striper season: the cinder worm hatch. Salt ponds with dark mud bottoms and skinny water corners where strong tides drain edges will warm with longer days and if all conditions align, really turn on in a short window of stellar fishing. To be clear, the hatch is not a hatch at all, but an emergence of worms spawning on the surface. Their undulating dances, as old as millenia, draw striped bass into a feeding frenzy from late afternoons to twilight and when conditions are ideal, the craziness can go on all night right until sunrise, which may be why some fishermen talk about getting into the worms on a morning bite.

Cinder worms are on the surface to emit eggs and sperm, not to hatch as the name implies, a likely misnomer from some trout fishermen who watched them rising to the surface. Ideal water temperatures should be in the mid-sixties but if things get too hot, the whole deal collapses. They are segmented polychaetes, members of the Neresis genus who spend most of their life burrowed in the mud, where they absorb oxygen through their skin as they have no gills. When a new or full moon pulls, their rear half, called the epitoke, develops a tiny paddle which enables forward and upward movement. Fantastic. As they wiggle and squirm on the surface, the reproductive dance plays out as the epitoke unloads. 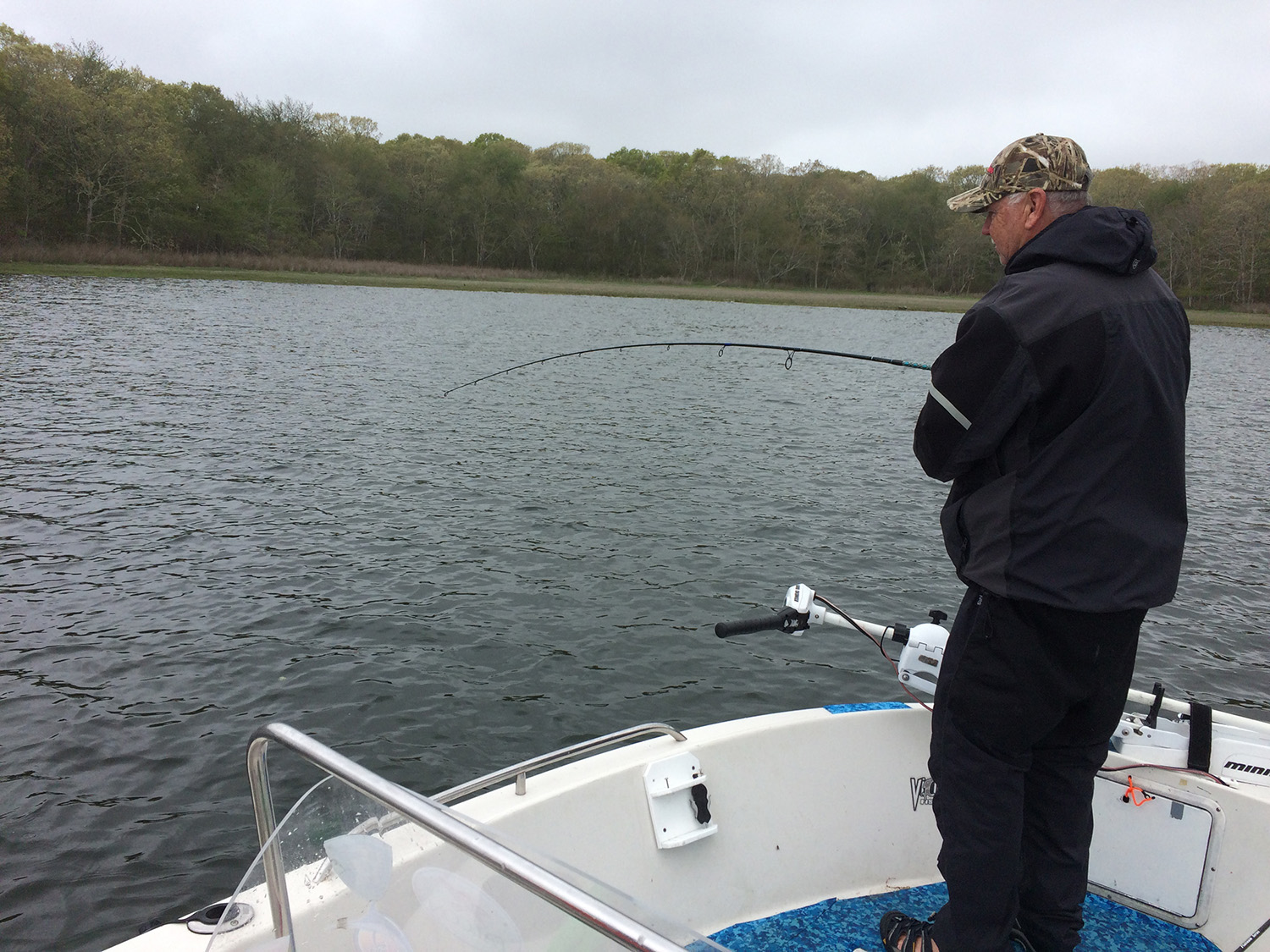 Bass have an amazing instinct which calls them to feed in one specific part of a pond when conditions are right or stay put with other prey.  We all recall days being tight in schools of bait, being awash in feeding stripers or bluefish with neither even thinking of your offering. It’s a failure of artificial versus natural baits. To win this battle you have to not only match the hatch, which isn’t a hatch, but also have a backup plan. Few things are more frustrating than clutching a tackle box full of everything and having nothing to catch a fish.

Seasoned fly fishermen will tie patterns in several colors because although these worms typically wear a red coat with some black near the head, variable environmental conditions seem to affect their appearance. Because bass are so focused on consuming cinder worms, color really is everything. Tieing a teaser fly approximately 24” before the main fly on a 15 or 20 pound fluorocarbon leader will help increase your chances of a hook up. Quick strips, six inches at a shot, of your fly line along with positioning your lure near some uneasy water may give it just enough movement to be attractive.  Keeping off to the side of feeding bass, where there is less food,  may help to distinguish them from the swarming churning worms.

Another tactic to experiment with is following the big fish-big bait theorem and use a pattern markedly larger than the naturals. Given all the food available to your desired fish, you have to make a big impression, perhaps casting to the edges or a bit beyond to then dragging your offering through the melee. A few experts will tell you the most productive time to land a big bass is at the beginning and towards the end of the swarm. It’s also helpful to look for slightly rippled waters to help keep your presentation active during the retrieve. 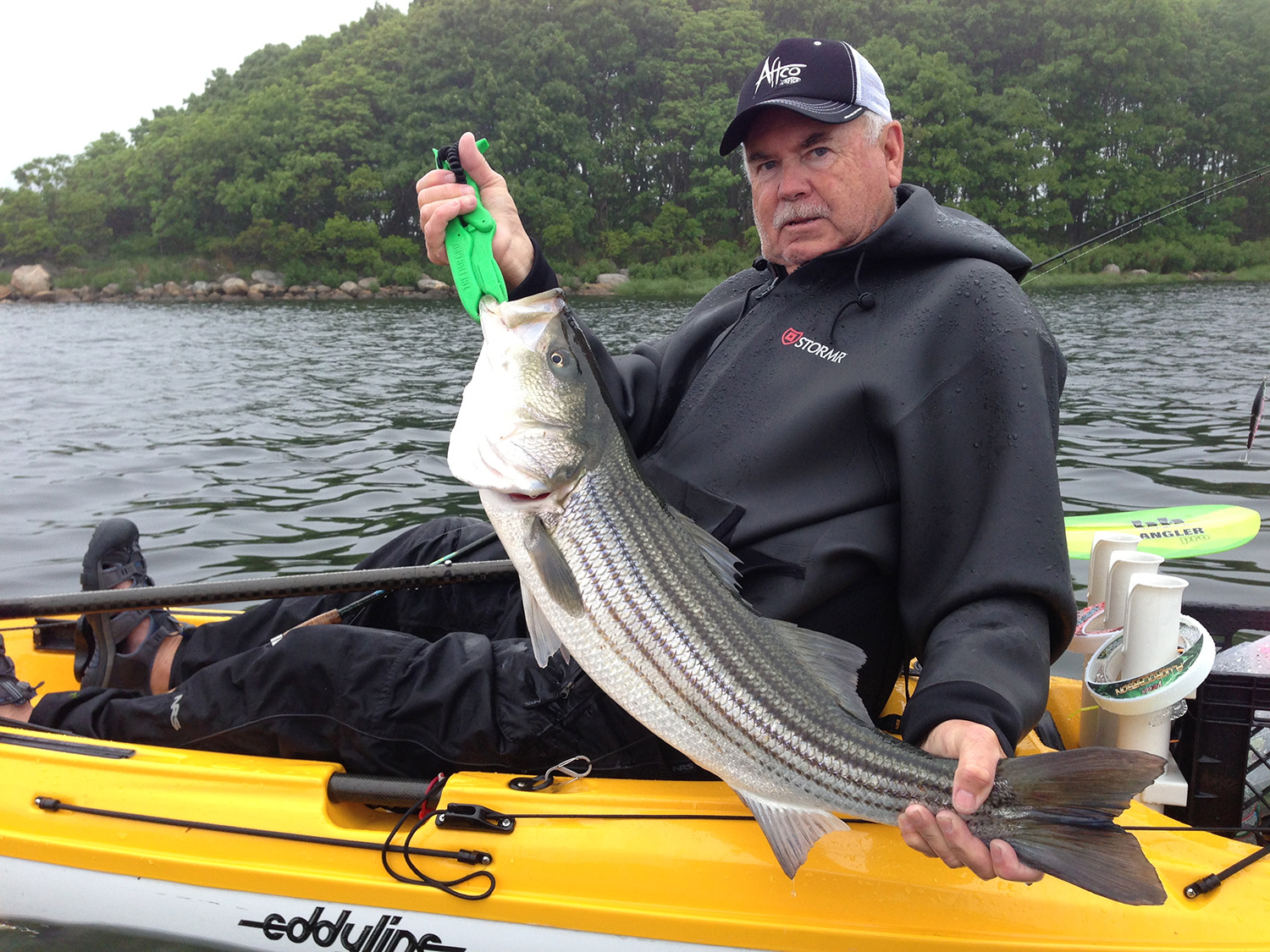 Captain Jerry Sparks lands another one; it’s what he does best

IGFA Captain Jerry Sparks of Northeast Boat and Kayak Fishing Charters noted that water temperatures have been unusually low, slowing the fishing so far. Several nights this past week, conditions seemed right but only left kayakers drifting, false casting, waiting for a bite that never came. Jerry has several tactics developed over years targeting shallow water fish and guiding customers through worm hatches. For spinning rod soft plastics, he recommended the Got Stryper brand because they are molded with special ribbing, giving them that crucial twitching motion when retrieved. Because you’re trying to get the attention of fish surrounded by food, that vibrating action will help draw a strike. C.A.L. jerkbaits from D.O.A. also work well, especially when matched with a dark nickel hook. The smallest of details, like too shiny a hook he told me, can make all the difference.

Captain Jerry prefers shades of red, pink and an occasional Tequila Sunrise to mimic the worms’ natural coloring. He also recommends hooking soft baits a bit more to the middle, in the style of wacky rigged worm, to help keep the presentation a little off balance and irregular.  It’s important to remember that when the sun rises and the worms settle down, the fishing is by no means over. When bass are on the flats, they are likely to continue feeding on silversides, herring, menhaden or whatever the waters are supporting. That’s the time to switch tactics and colors, not head for home. There are several videos on the web of RI salt ponds showing how the worms curl and twist with bass pounding them.

Hopefully, we should benefit from a week or two more of cinder worms surface dancing so there’s still time to book a charter or paddle into a warming salt pond where the surface can come alive with slurps and splashes. Waiting for rises, we just need some clear days of full sun segueing into strong rising moons over evenings of slight breezes and a calendar cleared. 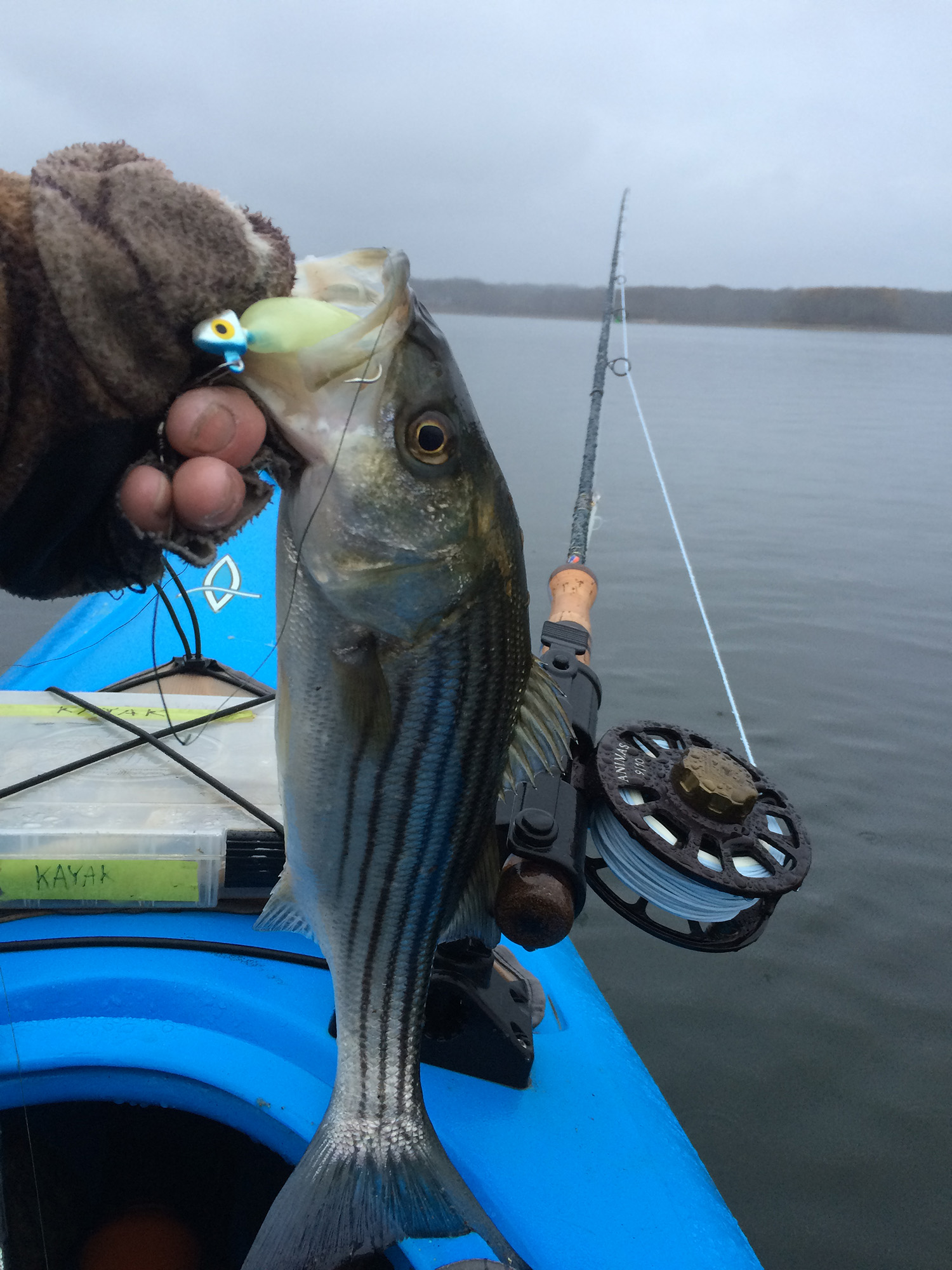 with a spin caster or fly rod, you have to be prepared

We lost Guy Clark this past week. A remarkable songwriter, he was among the last of a great tribe of western musicians.

“Days precious days, roll in and out like waves. I got boards to bend, I got planks to nail. I got charts to make, I got seas to sail.”

Check out the Fish Wrap Gift List 2020 for the best fishing, shooting and hiking gift ideas to catch fish, hit targets, get outside and have some happy!