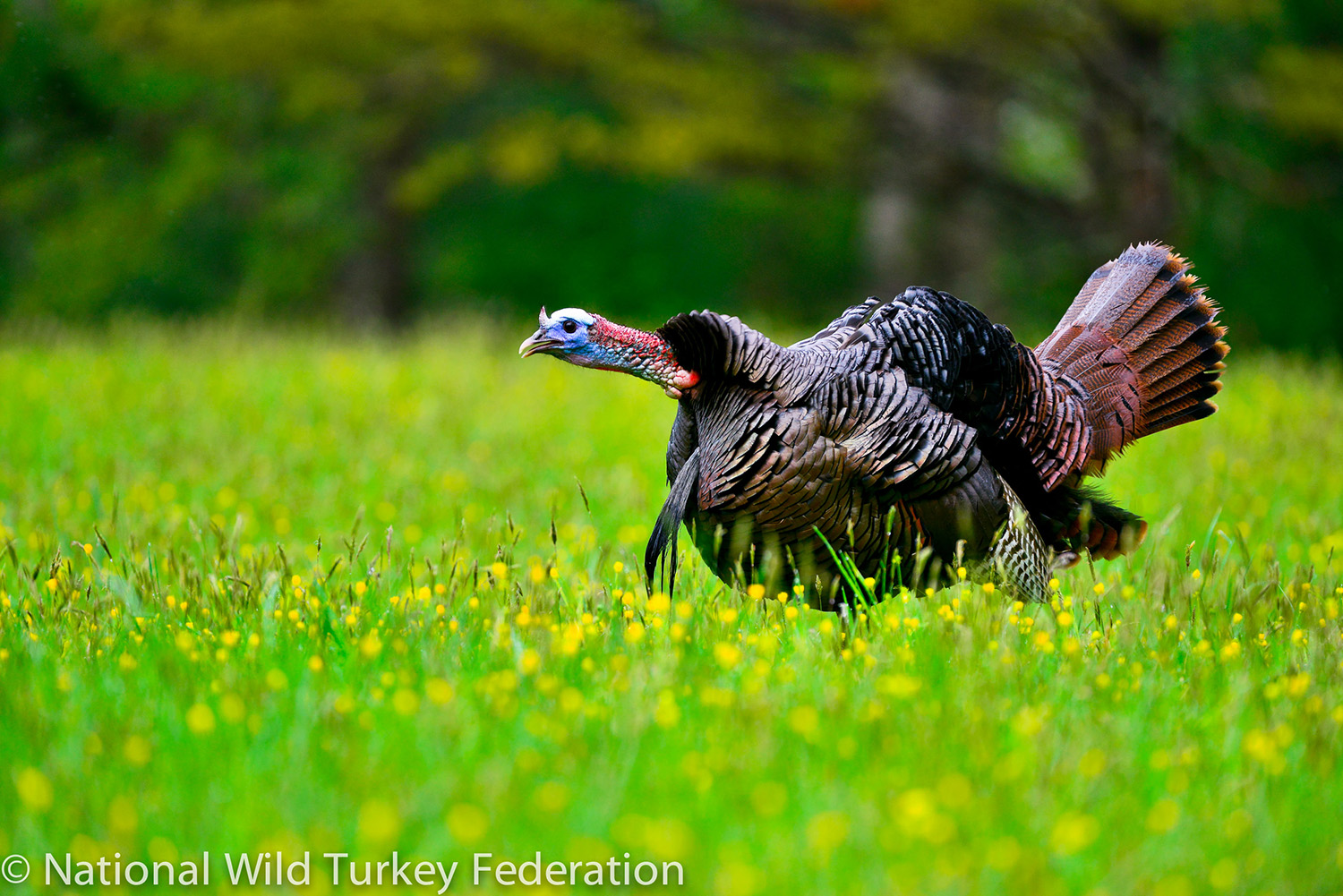 a wild gobbler on the move

Just this side of the Harrisville Mill Pond dam, a few people leaned over to cast worms into some roiling waters, a few others stumbled around, palms up, squinting while waiting for some silly, animated pseudo-life to appear on tiny screens and across the street, in a cool back of the house conference room, Wayne Barber called to order a meeting of The Swamp Yankee Gobblers.

Around the table were turkey hunters and members of The National Wild Turkey Federation, two groups passionately dedicated to the preservation of not just hunting turkeys for a few weeks a year but for the lands they need to survive and thrive. To open, there was discussion about how our little state had done such a big job of exterminating all the wild turkeys; some reports have it that the last bird was killed back in 1808. In a classic human hindsight observation move, we then decided to bring in some out-of-staters to fix things. A proper restoration project began in 1980 when Vermont trapped and delivered 29 wild birds to Exeter and for a few years, Connecticut stocked more turkeys near our state lines to help the cause. Right up until 1995 we received more birds from New York and Pennsylvania, even trapping and moving gobblers in our own state to balance the population. By many measures, all these efforts were successful as the population has spiked as high as 6,000 birds.

For this past spring turkey season, RIDEM’s Principal Wildlife Biologist Brian Tefft determined that 122 birds were harvested and although the majority were taken on private property, 12 birds were shot in 8 different state management areas. According to Brian, resident hunters took 78% (95 birds) of the harvest compared to 22% (27 birds) for non-resident hunters who came from as far away as Indiana and Georgia. The overall hunter success rate was just 12% which may seem low but turkeys are difficult to hunt. They are careful and quiet. They have amazing vision which allows them to see 180 degrees with such clarity they will detect you blinking your eyes from a hundred yards. They can fly thirty miles per hour, even faster when pressured. Being omnivores, wild turkeys have a preference for acorns but will feed on insects, soybeans and corn if necessary, growing to an average of about twenty pounds on our region. At night they roost in trees like mature oaks and pines, when weather becomes inclement, typically in areas near food and water.  These traits point to an obvious need to protect forests and freshwater sources not just for turkeys and upland birds but for our shared important heritage as sportsmen.

photo credit to RIDEM and their excellent hunter education programs

This year, Wayne (facebook.com/wayne barber) realized that Rhode Island was the only state in the union without an active chapter of the Federation. The original state chapter was formed back in 1993 to promote the sport and stock of eastern wild turkeys but by 2010, membership had dwindled and the chapter deflated. It’s not uncommon for groups to dissolve for lack of participation or volunteer time, internal politics or apathy but in this case, Wayne realized our population is growing quickly and that housing, convenience stores and land scorching asphalt parking lots quickly gobble up open space. Having a voice to preserve critical upland habitat for turkeys and other animals was too important to let it fade away completely. His first move was to bring a regional director for the Federation, Fred Bird, onto his wildly popular radio show, WNRI’s The Outdoor Scene (www.wnri.com). That conversation got the ball rolling and today the chapter is growing quickly, already with 280 members. 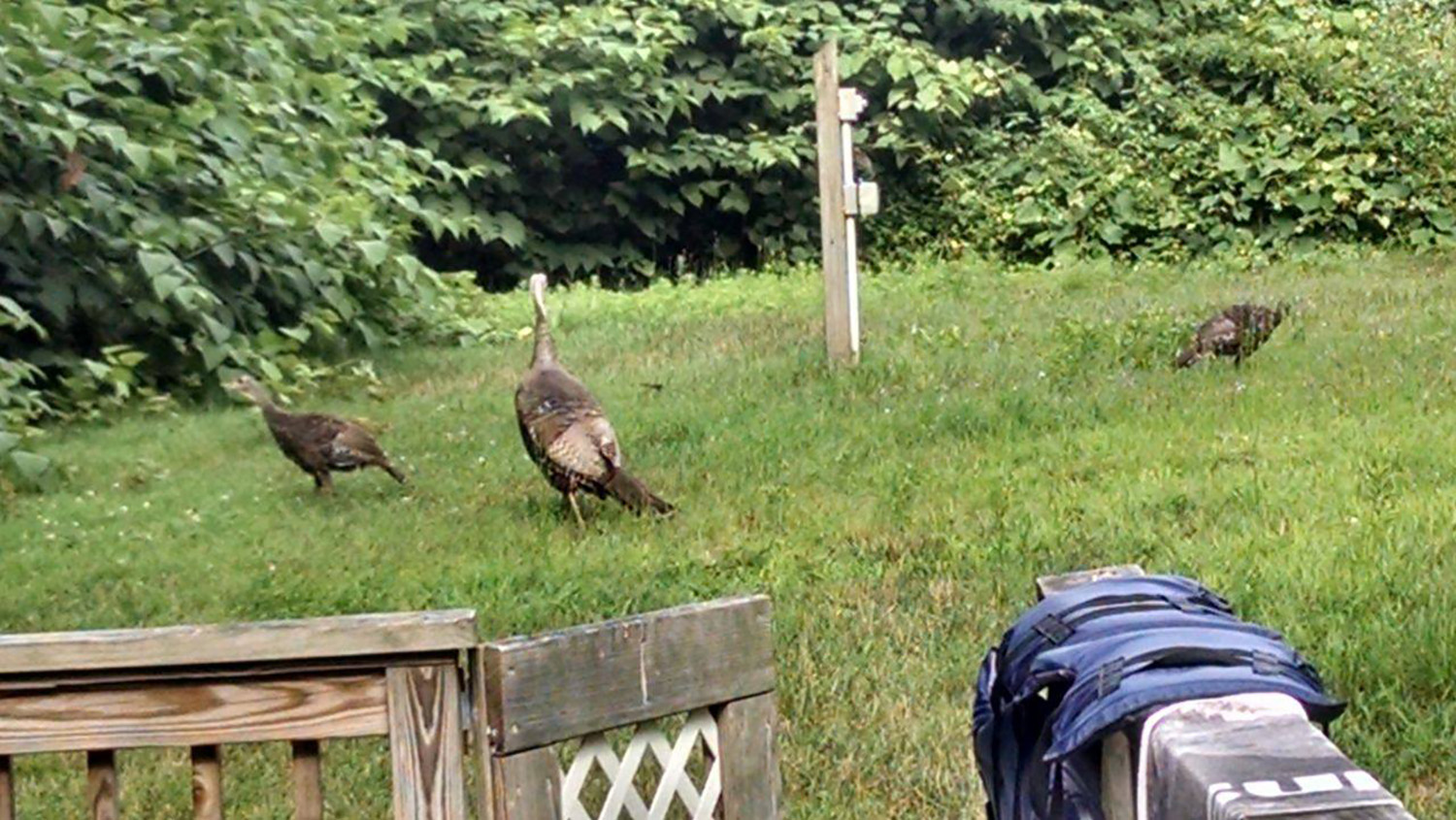 Mike Fotiades has a perfect back yard for turkeys. thanks for the picture, mike

In addition to leading the chapter, Wayne hosts two other radio shows, a local NASCAR roundup called Race Chatter and a new show dedicated to Rhode Island writers called The Author’s Hour.  Semi-retired from the corporate world, he has written several books, is an avid voice for sportsman and a shrewd social media operator. Recently Wayne helped write legislation to ban the use of lead weights under one ounce in freshwater and now is crowdfunding a Wheelin’ Sportsmen program to purchase hunting tags for veterans. Clearly you can see how the emphasis is on semi-retired.

Today there are approximately 3,000 wild turkeys and 1500 turkey hunters in Rhode Island. By rejuvenating the chapter, Wayne has opened a door to nationally supported restoration projects, educational opportunities and land management assistance. Referencing the many and notable conservation projects undertaken and completed by the NWTF, Fred said, “Every project we have done is open for hunting and recreational use”.

The Swamp Yankee Gobblers have monthly meetings, a Facebook page and lots of plans.

At the table, there was more discussion of boosting membership, beginning their J.A.K.E program to teach school kids the basics of upland game biology and habitat, working cooperatively with other state’s chapters and our DEM to sponsor seminars to teach turkey hunting safety and techniques, promoting the Women in the Outdoors program, an upcoming banquet complete with an auction and a delicious porketta, something never to be missed, and the fall hunt. Membership costs just $35 and for a time, that fair price comes with a $25 Bass Pro Shops gift card. Talk about an easy decision. In a small room, in a small state, the Swamp Yankee Gobblers are making lots of big plans for a sport where the regulators and hunters are eagerly working together to protect a species and a heritage.

Sadly, George Henault has passed on. Mr. Henault was a solid, patient, decent man with always the outstretched helping hand to his native West Warwick and his second love, Block Island. A funeral director, sailor, volunteer, provider, husband of 49 years to his beloved Ann; his was a full life always awash with ocean and charity. For this loss, our loss, for his next travels, paradise awaits.

For his son David, the force behind Ocean State Tackle, you have my sincere condolences.

feng shui for bait, on worden pond, the sweet sound of guns

Keeping shiners in the bathtub can put a quiet but significant strain on a relationship. While logical for the average New England ice fisherman, some significant others apparently find such live storage to be unusual, unnecessary and kind of gross. The bucket which...
Keep Reading