If you want to know what’s happening in the fishing world, you have to ask the right people. At Snug Harbor Marina, we brought together 6 young fishermen and fisherwomen to talk fish, tips, secret spots, favorite gear, stories and stretched stories. A few were right there with the goods, a few were hesitant, one gave up nothing. In the end, it took chicken nuggets and french fries to make the kids talk.

Everyone seemed to have started fishing in freshwater. Gavin Graham first went fishing at age three, when he landed a sweet little sunfish. Gavin is surrounded by a family surrounded by water;,he sails the salt ponds and Narragansett Bay, his parents work and teach at the GSO and he fishes places like Horseshoe Falls for largemouth, fluke and stripers with his father, although his grandpa’s love for fly fishing hasn’t really translated just yet. 13 year old Knoll French hasn’t taken to fly fishing yet either because, “There’s just not enough action in it for me”.

This is not Knoll’s first time in the paper; he was a star on these pages a few years ago.

a younger Knoll French from Fish Wrap a few years back

Knoll knows the ponds and the times to be there, his skills and freezer full of fillets are largely due to his dad. “Everywhere we go my Dad just says, ‘Let’s go fishing!’”, Knoll said. He’s caught lots of fish in lots of places, including a personal best seven pound largemouth. “Where did you catch that?”, I inquired. “Lots of places”, he quickly replied; quite possibly the best answer ever from a young man with lots of catching in his future. He caught some nice pike one afternoon and when asked where he caught them, Knoll said his adrenaline was really pumping, which purposely had nothing to do with answering my question, so we moved on.

With his friend Justin Walker, they hit the local ponds as much as possible and that Justin, he’s an ace. His dad first took him fishing at Barber Pond when he was five years old, he’s cool and confident with a biggest largemouth so far being six pounds. “Actual weight”, he clarified. When asked questions we don’t want to answer, we tend to look around, shuffle feet, scratch arms. Ask Justin a question and he looks you in the eye with an answer. He knows about fishing the Mud Hole, trolling for tuna and just last weekend, he and his dad caught a 35 pound striper off Block Island. He managed to give up they used eels near Southwest Ledge in sixty-five feet of water. Finally, some answers. Quickly I grilled him for his all time favorite spot. Justin scanned the table, reached for a fry and shuffled his feet. “Me?”, he replied.  The door had closed. 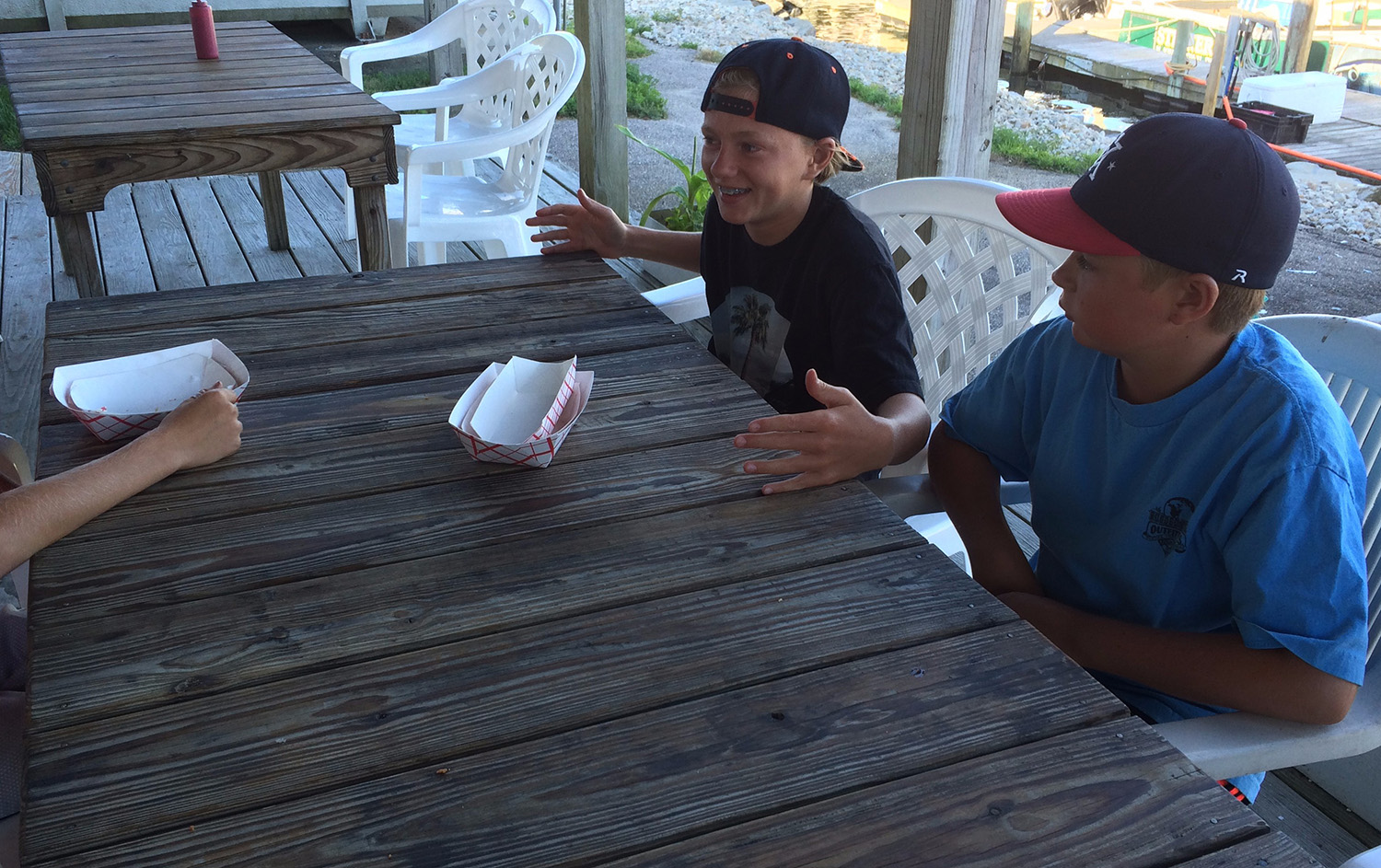 Talking with sisters Riley and Lauren Jackman required a translator. They could not be more sweet and they laughed the whole time, mostly at my expense I suspect. Lauren balked on most questions and Riley mostly just shook her head and smiled so I was never sure if they were just politely ignoring me or politely holding out. Mark Twain wrote, “Do not tell fish stories where the people know you… but particularly, don’t tell them where they know the fish.”

Lauren thought she was six when she caught her first fish in Ninigret Pond. She and her sister share twenty-something rods and boxes of tackle and as their family owns a marina, they’re growing up playing in a backyard of docks and skiffs, swimming in a salt pond, dangling their feet in strong tides. Their Uncle Matt takes them fishing in his boat, their mom, Elisa, is the infamous smile and glasses behind the counter jammed with reels in the best-stocked tackle shop anywhere. Riley and Lauren weren’t convincing me that they didn’t know where the fish were.

A pattern was starting to develop, it read like this:

riley jackman with a giant fluke she “forgot” about…

Fish Wrap: “What do you like to fish for?” Riley Jackman: “Fish”  FW: ”Where did you go fishing?” LR:  “I have no idea.”  FW: “Outside the wall?”  LR: “I guess.” FW: “What’s your biggest fish”  LR: “I don’t know”, laugh, laugh, laugh…Later, it was Elisa who unlocked their memory’s with stories of a huge largemouth Riley caught when she was seven, now mounted on the wall. “Oh yeah, there was always an Easter egg in its mouth”, she mysteriously recalled. Then there was the 2.7 lb. sea bass that won her a RI Saltwater Anglers Association award when she was five. At that age, most kids are playing in sandboxes not jigging squid strips along Nebraska Shoals. Elisa asked, “Have you ever seen the shed?”, which I suspect is packed with rods and gear. Riley passed the ball, giggling that it was only for bikes.

The same day Riley pulled in a 5.7lb. slammer fluke, her sister Lauren landed “7 or 8 stripers”. A striking similarity between young and old adults is memory loss; one suffers from it when looking for car keys or the actual car, the other group enjoys it when they know they’re on top of the situation. Now at 12 years old, Riley has apparently already caught enough fish to start forgetting.

We moved into telling fish stories and stretching the truth. Based on our prior interview, I went straight to Knoll, the man who invented putting “ish-” after key words. “That’s from when I was little”, he offered, looking down at the table. The Ace chimed in, “Sometimes I might exaggerate a little but I don’t do it a lot.” A few minutes later, it was Knoll who had his hands stretched across the picnic table to show one catch’s estimated size and clearly we all saw his hands continue to grow wider apart. It’s a self-defense move, a defense of personal pride and angler reputation.

There was discussion of starting a fishing club or team at their school but the former idea brought an immediate reaction from Knoll: “So many kids are getting into fishing, I wouldn’t want to show them all my secret spots.” Fair enough, club dismissed. The idea of competitive fishing held more interest, before the team was even developed, shirts and sponsorship were discussed; there was talk of bringing on Bass Pro Shops or at minimum, Fish Wrap.

Knoll and Justin had been out “frogging” the prior night at yet another unnamed pond. Big bass love to attack frogs but the lures have curved, weedless hooks which sit closely to the back, making hooksets difficult. When asked about this, in tandem they said they knew enough to pause and let the bass properly fully inhale the lure before pulling the rod tip back hard. Need some help moving from fishing to catching, ask a thirteen year old.

With the fries long gone, we wrapped it up talking about the future. Knoll dreams of fishing Hawaii and peacock bass, Justin wants a goliath grouper, Gavin has his sights on a Maine rainbow trout, Miles spoke of Alaskan halibut, the girls reluctantly mentioned maybe possibly catching a bluefin tuna, giggle, giggle, giggle. Curiously, no one at the table kept a fishing journal. Digital cameras capture every moment but pictures become meaningless numbers lost on hard drives and memory sticks.

Fishing logs are useful for looking back at which lures worked when or to see how fun life was without the burdens of adult responsibilities and distractions; more importantly, they are handwritten windows for seeing how much our children loved to fish, how they grew as friends and just how fantastic these six young adults really are.