On Patrol with RIDEM Law Enforcement 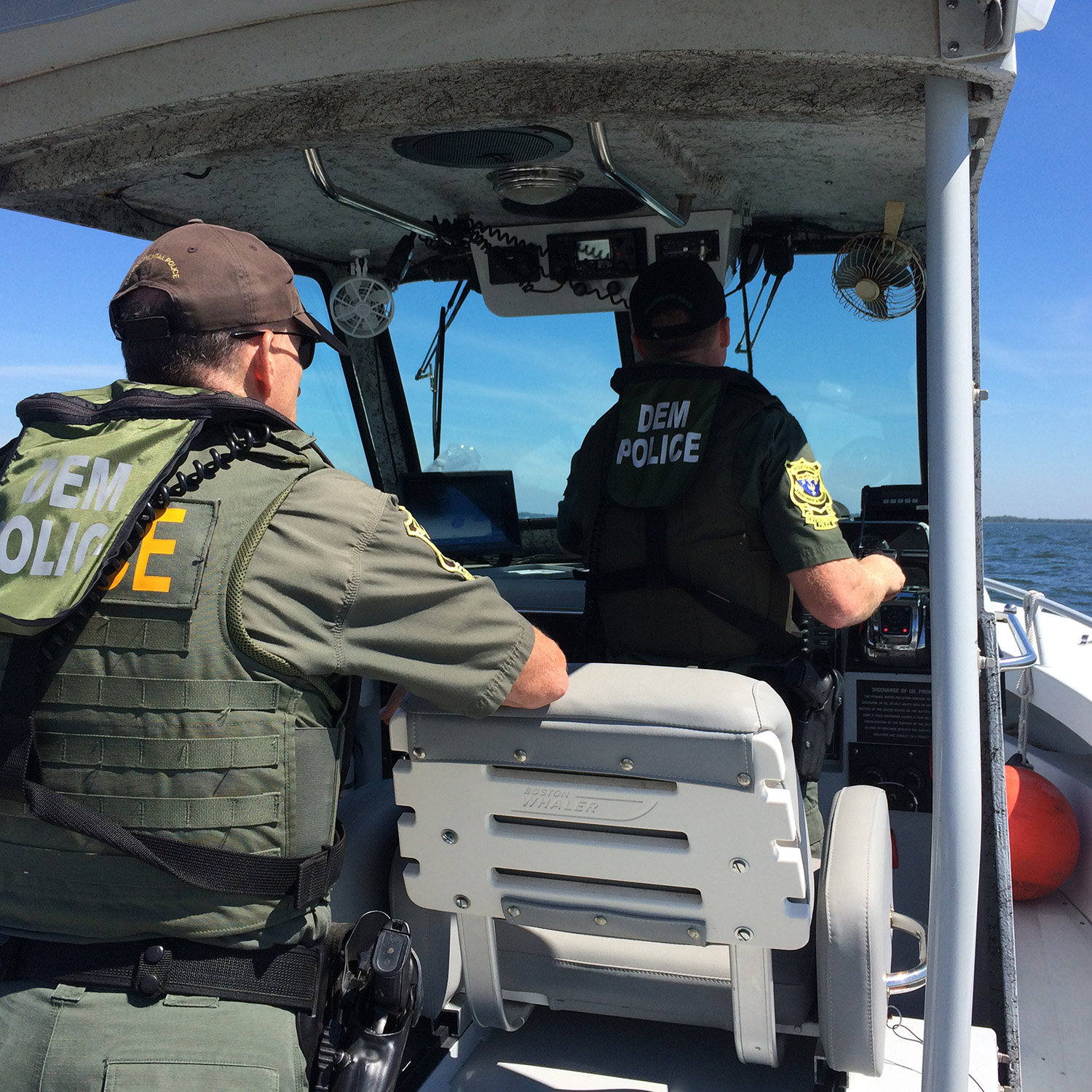 RI Department of Environmental Management Environmental Police Officer Mike Schipritt was again gracious enough to allow us to shadow a patrol, as we did last summer. For this patrol, we joined Marine Unit officers Jeff Mercer and Kevin Snow at their Wickford station, leaving in a spotless 27’ Vigilant with twin 250 horsepower Verado outboards. There would be no outrunning this boat.

All environmental officers have completed the RI Municipal Police Training Academy, earning them distinction as police officers in addition to their multitude of DEM-specific skills. The Marine Units handle the entire expanse of Narragansett Bay, our state’s southern coastline and operates with a Memorandum of Understanding to enforce the law in federal waters. They handle boater in distress calls, inspect recreational and commercial fishing boats, help with shellfish transfers and regulation enforcement, assist vessels travelling through shipping lanes, watch for intoxicated boaters and teach boating safety classes. Officer Mercer, who has a Masters Degree in Biology, added that a routine patrol might also call on them to, “assist the Coast Guard when they need more assets”, like securing perimeters around vessels transporting equipment to the Deepwater Wind project in Block Island Sound. 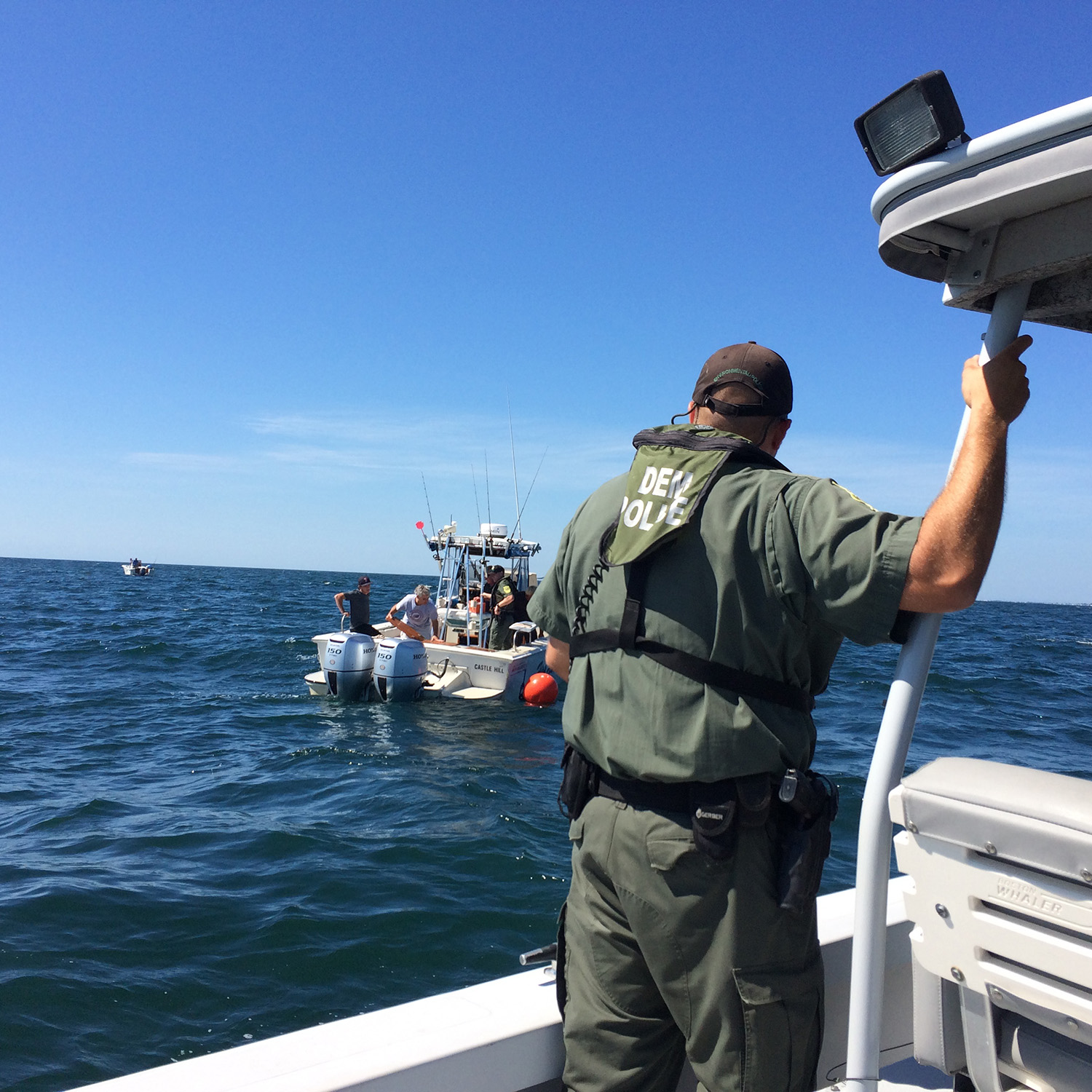 In addition to all that, officers also are required to handle bats in your house. True story. David Brown, Chief of the Dallas, Texas Police Department spoke after the recent tragedy where officers were hunted by a sniper, about how officers’ roles have changed. “We’re asking cops to do too much in this country”, he said, “Every societal failure, we put it off on the cops to solve. Not enough mental health funding, let the cops handle it…let’s have the cops chase loose dogs. Schools fail, let’s give it to the cops. That’s too much to ask. Policing was never meant to solve all those problems.” 24 DEM officers patrol all of Rhode Island; that’s 1214 square miles of land and 400 miles of coastline in addition to state waters out to three miles and federal waters.

The first boat boarded for a safety inspection was from Connecticut and the solo fisherman had been efficient enough to fillet his catch into an old plastic shopping bag. This common scene is a tricky one for law enforcement because there’s no way to determine if any was of legal size when landed. It’s logic versus law. If you had drifted over a hot spot of feeding fluke, would you take the time to work a fillet knife or would you keep fishing, especially considering you were single-handed without anyone else to keep bait on the bottom? “Fillet and release”, some say.

According to the Atlantic States Marine Fisheries Commission, the 2015 stock assessment shows that fluke stocks are not currently overfished but overfishing is occurring. Their report states, “The fishing mortality rate in 2014 was estimated to be 16% above the fishing mortality reference point. These results appear to be driven largely by below-average recruitment…”. Recruitment is the key here; summer flounder typically become sexually mature at two or three years old, making them approximately 10 inches long. If anglers are taking undersized fish-the RI minimum size is 18”-chances are high they are taking fish which may have only spawned once or twice or possibly not at all. As recently as last month, the Mid-Atlantic Fishery Management Council wrote that “the stock biomass is dangerously close to being overfished”, which means reductions in harvest will surely follow.

The alternative is to make filleting at sea unlawful, something not many support. It has a real “Big Brother” feeling but looking into a dirty Dave’s Market bag of small withering white fillets, it sure makes you wonder how many fish left in a bag that should have been left alone.

Back on patrol, they boarded a small boat with three men fishing 10 poles. They had scup on ice and an angler with no license. What Officer Snow, who graduated Valedictorian of his academy and is completing his Ph.D in oceanography, did not do, was judge. Anyone saltwater fishing must have a license, period. He explained how to get one right then with a smartphone, which no one had. “You mean my wife could do it on the computer, sir?”, the now side-lined angler asked, “Absolutely”, Officer Snow answered, “and she could text it to you right now and you’d be good.” Officer Schipritt let him know he was done fishing for the day and an easy lesson was learned. The next boat, jigging just a few yards to the west, greeted the officers with “Good Morning! Good Morning!” All four fishermen in their matching Quaker Lane Bait & Tackle hats had the necessary safety equipment, although the flares were getting old so Officer Snow advised them to purchase some replacements with a warning, “They sell them like they sell milk, check the expiration dates before you buy them” and everyone happily and safely went on their way.

When an officer steps aboard a vessel of any size, their professionalism sets the tone but they don’t want any surprises. 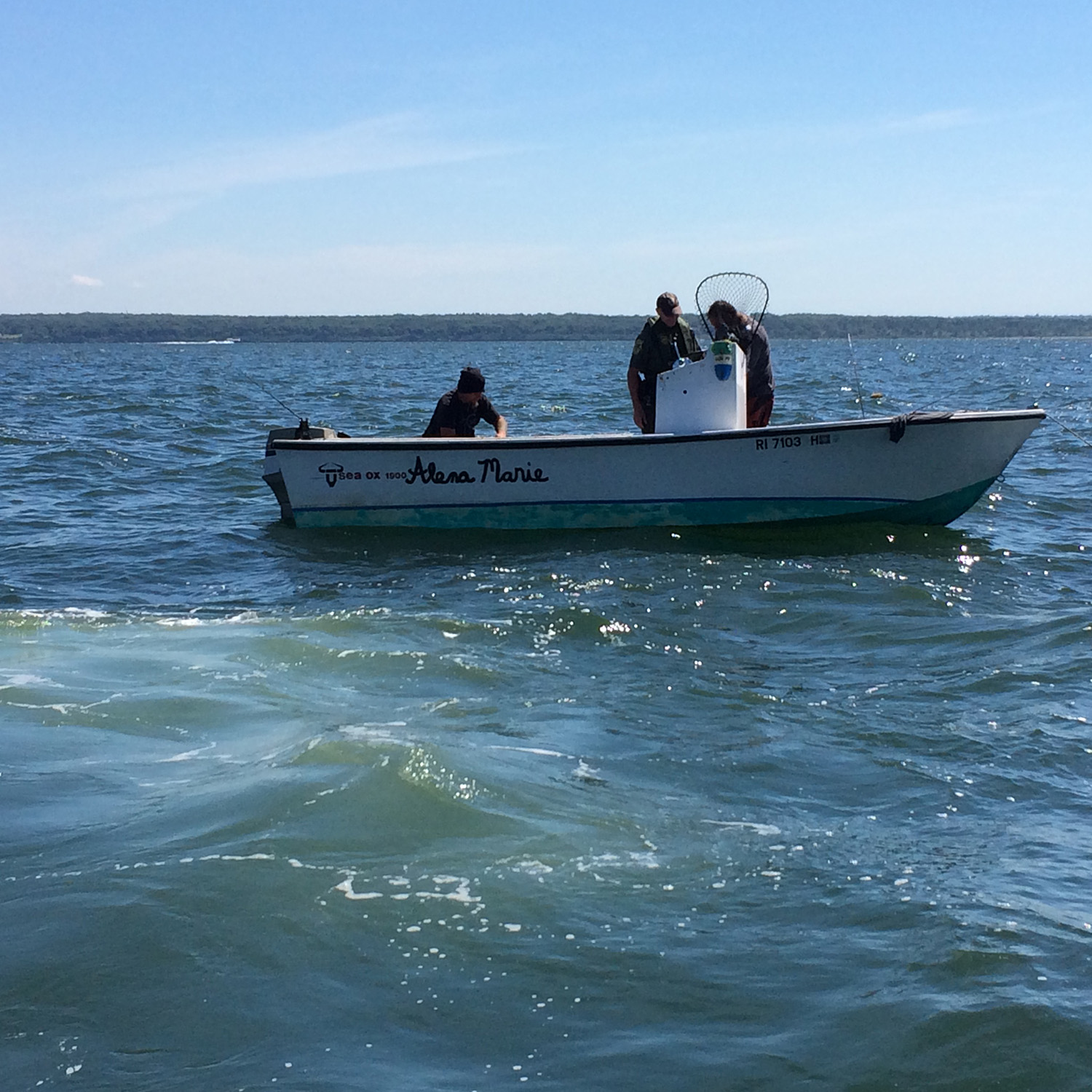 Coming aboard is a cautious moment, their inquiries are standard, the laws are there to enforce. Not everyone appreciates a complimentary, unrequested safety inspection; it takes you off your drift, it may cause the fish you were definitely about to catch go deep or it may just save your life when everything goes sideways, as Officer Schipritt is known to say.

Fisherman Kris Keckler was boarded this past June and offered this on a Facebook post, “All I can say is that meeting was a very professional and courteous encounter. They checked our licenses asked how we were doing and did their job. They could not have been nicer to my 6 year old son. I’m a firefighter and understand that civil servants do not always get the recognition that they deserve. I thank the two officers for their service and the respect we were shone (sic).”

We worked east to Brenton Reef, boarding the handsome center console “Flounder Pounder” whose operator didn’t know the minimum size for keeping flounder and as ignorance is not an excuse, a warning was issued. North to Newport, Hope and Despair, a few more recreational boats were checked with almost everyone having an easy attitude towards the questions. Back at the dock, I recollected how many scup were in the bay, how fast that first fisherman sped north as soon as the boarding was complete, how many people started scrubbing and rinsing fillet tables when we came in sight, how many people didn’t know basic fishing regulations.

After shaking hands with all three officers, Officer Schipritt handed my young son a coin sized token for a free Dell’s Lemonade. It’s a traditional, fun reward for kids who wear their PFD’s, started by owner Angelo DeLucia and continued by new Chief Dean Hoxie. In the high heat of August, that simple gesture exemplifies how DEM Enforcement officers easily bridge any gap between the risks of boarding vessels, protecting boaters and educating our next generation of fishermen.

It was a long awaited Friday night fights in South County salt ponds. Finally a full day of warming sun brought cinder worms from the mud to a muddled windy surface so the dance could be begin. It was a worm hatch like you read about, which we hope you read about here...
Keep Reading

This is such an unbelievable time to fish Rhode Island. Decent-sized stripers are still feeding in salt ponds, fluke season is here, bluefish are making a mess of plastics and up in Narragansett Bay, well, the fishing is epic. Southern salt ponds are holding...
Keep Reading