This week: how to avoid toxic shellfish, where to catch a striper and how to lose a fly rod and smile about it.

Narragansett Bay has been closed for the first time due to a bloom of the toxic phytoplankton Pseudo-nitzschia. From the mouth of Narragansett Bay to Conimicut Point, including Greenwich Bay and all tributaries to those waters north of Pettaquamscutt (Narrow) River, waters are shut down to the harvesting of shellfish, wild or farmed. Since the first detection, the closures were extended to include Mt. Hope Bay, the Kickemuit and Sakonnet Rivers from Sachuest Point to Little Compton. This is an unprecedented move to protect consumers from the microscopic, slender diatom which produces domoic acid.

Affecting fish, shorebirds and humans, DA can lead to amnesiac shellfish poisoning (ASP) in humans, causing permanent short-term memory loss and lead to comas, seizures and death. Outbreaks are called Harmful Algal Blooms or HABs and conditions which trigger blooms for this particular species are not well understood.

According to NOAA’s State of the Coastal Environment white paper, Pseudo-nitzschia was “first identified as a toxic HAB species in 1987 in Prince Edward Island, Canada, when 150 people became ill and three died as a result of eating blue mussels, rich in domoic acid”. The paper cited that, “Some HABs have also been reported in the aftermath of natural phenomena like sluggish water circulation, unusually high water temperatures, and extreme weather events such as hurricanes, floods, and drought.” Researcher Ewen C.D. Todd determined that, “Three victims died 11–24 days after intoxication, by septic shock or pneumonia, while others recovered within 10 days after a period of confusion and nausea, but continued to show evidence of selective short-term memory loss.” Todd also noted, “The most severely affected cases still have significant memory loss 5 years after the incident.”

“No one on this coast is that experienced with a domoic acid event,” said Darcie Couture to The Portland Press Herald’s Peter McGuire. Maine, where mussels are harvested by the tractor trailer load for shipment to Rhode Island, is right now experiencing a similar toxic outbreak. Couture, former chief of Maine’s biotoxin monitoring program added, “A closure for this toxin in eastern Maine is unprecedented, that is not anything anyone has ever seen…I don’t think it is sinking in how serious this is.”

This same toxin was responsible for the death of more than 50 sea lions on the west coast in 2015 in addition to the suspension of the lucrative Dungeness crab season. All shellfish from legal dealers bears a tag with dates and locations of harvest. You can ask to see them in a fish market or restaurant. Given the severity and potential of long-term infections from tainted shellfish, the best plan is to avoid any and all shellfish harvested from Narragansett Bay, which includes aquacultured oysters, clams and mussels.

On a more positive note, fin-fishing remains strong. Peter Jenkins at Middletown’s The Saltwater Edge, has reported great fishing along “the drive” with fly and spin fishermen catching stripers in the whitewater. False albacore continue to patrol south facing beaches and all over the Newport area, bass to 38’ were being landed near Watch Hill although Fall waters and winds might quickly shift the bite. Chasing albies from a kayak or center console can be challenging but from the beach? With a fly rod? Pete Farrell knows how. 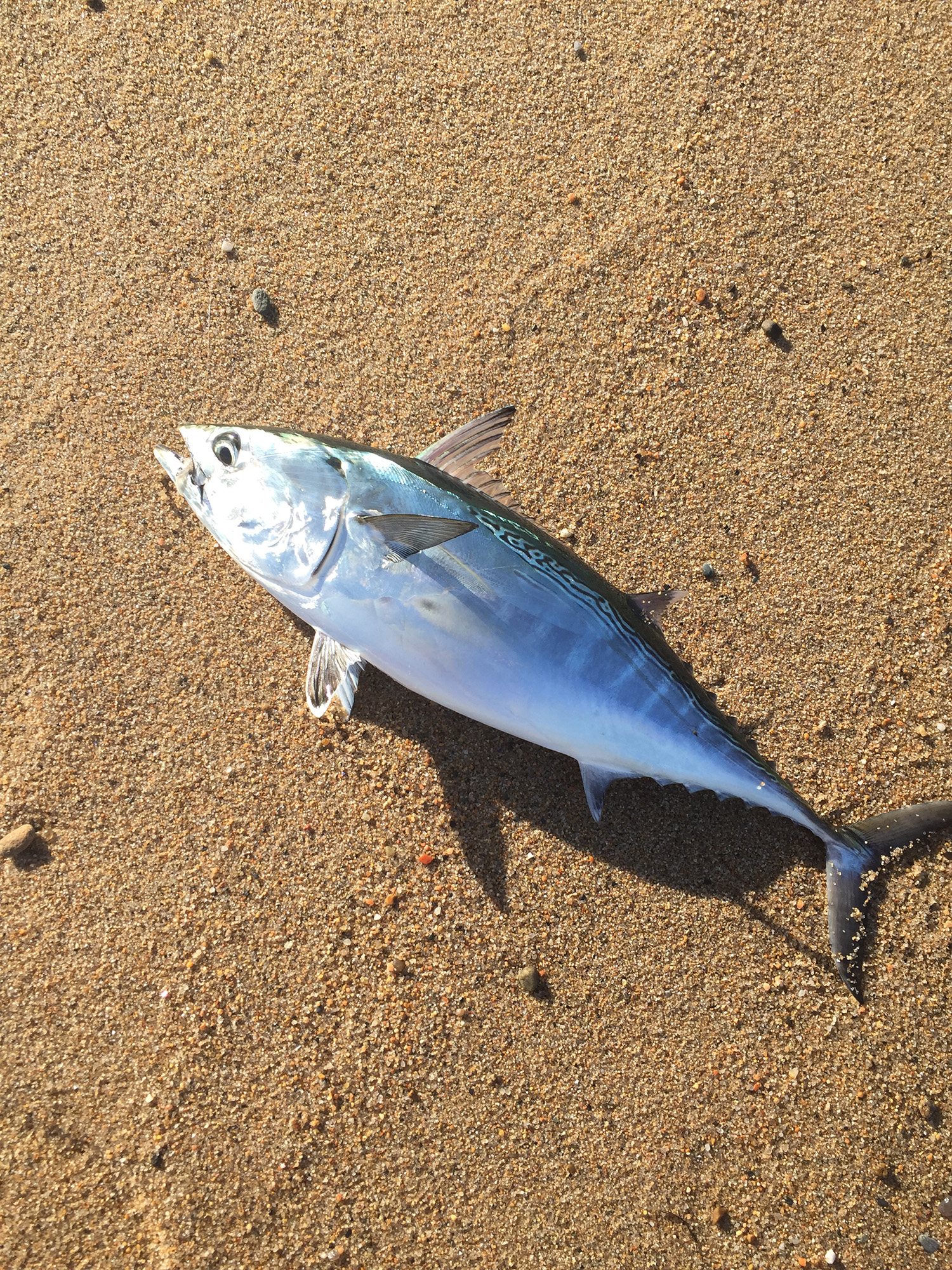 Pete’s a well seasoned guide who works, tends to his family and fishes, three very demanding jobs. He also runs in a tight circle, as he says, “a whole subculture that fishes for albies from shore.” Fishermen like Pete invest serious time energy and science into finding fish, be them stripers, albies or browns. Like a river, everything he does or says leads to fish or catching fish or planning a safari to find fish. Almost every word is a trigger to another story, past or potential.  I could say “crayon” and he would have a story about a Fuzzy Wuzzy Brown trout he landed in upstate New York. He’s that passionate. We’ll pay Pete a longer visit in a few weeks but for now, it’s all about the ones he caught and the one who took his fly rod.

Hurricane Hermine had finally imploded, opening waters to fishermen. Pete was casting on the quiet side of Block Island’s Great Salt Pond channel, landing an albie at first light. You have to get out of bed if you want to outfish someone like Pete.

“Things quieted down, so I was blind casting, then I caught another one, then I got three more successively in half and hour”, he said. See a pattern? Pete was casting a custom made one piece nine weight rod built by a friend, Duxbury’s Chris Aubut. But then his hands were wet and slimy from releasing all those fish, his heart got tipsy with adrenaline as the line went tight again and then, well, things sometimes go sideways. In a show of strength, that albie went deep, taking Pete’s rod and Orvis reel with him. 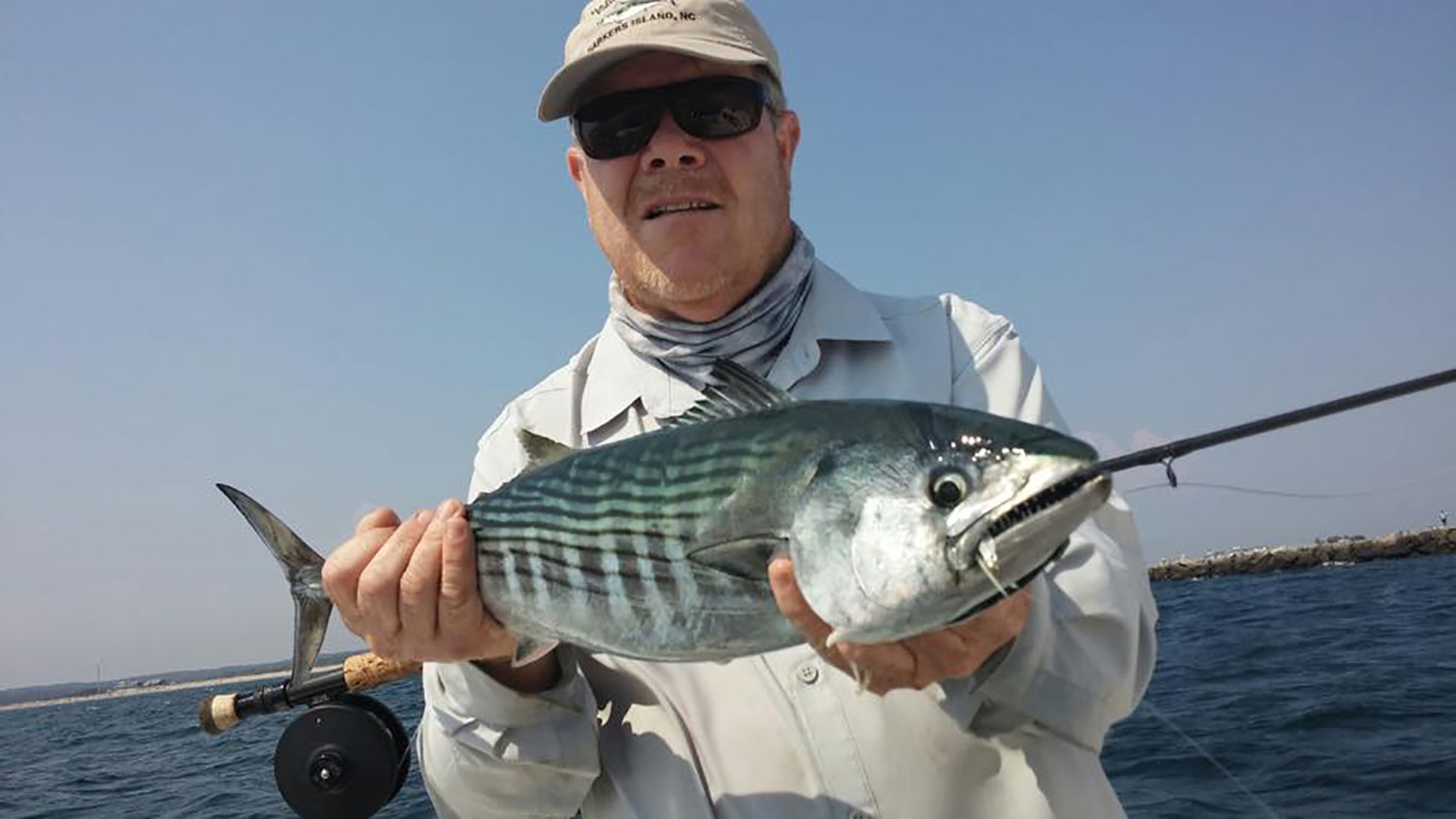 Pete Farrell, great guide and a hell of a fisherman

“I know it’s happened to other people. I know it doesn’t happen very often”, he lamented. “I jumped for it and filled my waders”. It was a fine Orvis Mirage reel and a tough combined loss of rod, reel and fish but in the grand scheme, not worth the aggravation of drowning. Pete has a new Mirage, the custom Aubut rod will take some time. Pete has the best attitude about such things. Those things pulling on the strings of his life make him work even harder to find fish so best said in his own words: “Part of it for me is the safari, you’re just on the quest and my thirst is not quenched yet.”

Maybe I missed it all back home, but in the woods of Maine, for a week, I watched life fast forward. From a canoe and over a coffee, we met new, good people, caught fish and watched as a young child grew to become a young man. Maybe I didn’t miss anything at all.

Striped bass fishing has improved, a bit, there are some bluefish, dogfish and scup around but fishing for fluke seems to be steady. Guys casting from shore for stripers are reporting low numbers, few big bass and still some fish feeding in the salt ponds. These are...
Keep Reading

So it is, the end of another year and we’ve been so fortunate to report on people searching for and catching fish, people protecting resources and people who were just straight away characters. We started by meeting Mike Lee, proud new owner of Al’s Goldfish Lure...
Keep Reading

If you have a few dollars to buy a fishing rod and maybe a few tears to roll down your cheeks, a guy named Don Barone needs you.  Last Saturday, a mild man with the look of David Crosby sheepishly accepted the Dick Cronin Member Sportsman of the Year award from the...
Keep Reading