Winter doldrums gripped us all.

Outside, roads were tight with dirty snow; it felt like years since we’ve been fishing. Each door opening carried in more frigid air and another angler answering a siren’s call. Peter Jenkins: shopkeeper, guide, tier of flies, relentless fisherman and consummate gentleman, stood shaking hands over the glass counter. Peter saw the need, held a Retro Fit Plug Night and created a temporary oasis on a February night.

Peter opened his Middletown fishing shop, The Saltwater Edge, to a cast of characters toting plug bags and coolers. What’s cooler than a gathering of like-minded, seawater-starved fishermen sitting around a few tables piled high with rusting hooks, threadbare swivels and hopes of rigging everything up right for a new season? Peter’s night of escape was a perfect distraction from the calendar.

Peter has that wonderful youthful exuberance you find with people who always have something to show you or just seem glad to see you. His excitement was contagious. There were stories of fooling largemouth with a green on green imitation frog, a finicky striper falling for a well worn yellow bottle plug on the fifty-third cast or T.J’s new tattooed pink tuna plug cradled in its case, waiting for a sweet summer day at The Dump. Throughout the night, as he hustled between tables, boxes of flies and displays of new gear, he easily tied a rainbow of feather patterns to new tail hooks. 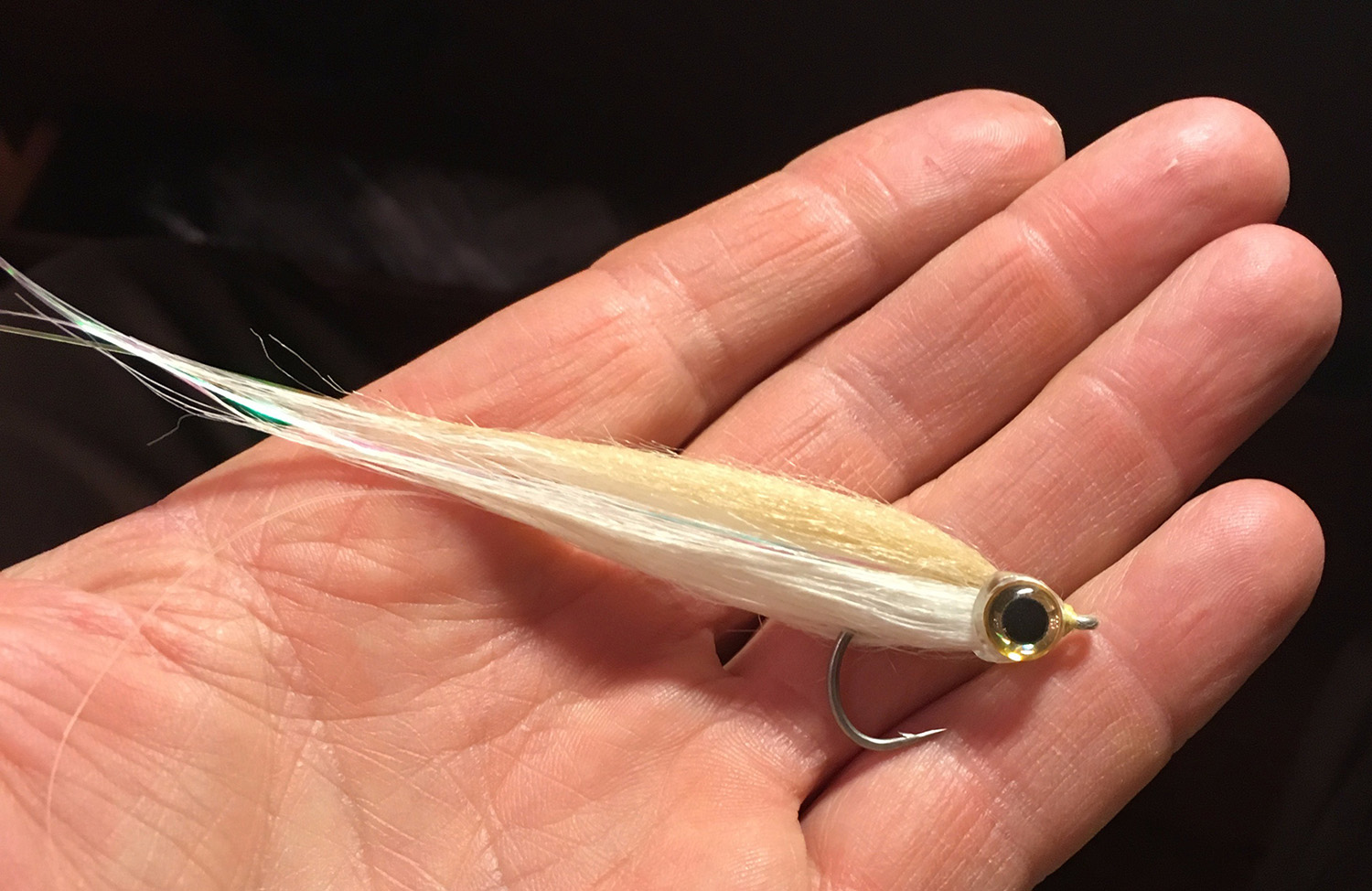 Surfcaster Dennis Zambrotta told some tales. His stories start quickly and can last a while. Dennis put in his time on Block Island, searching for stripers and later wrote a well respected book about his journeys out there. Passing on the bolo, this night was all about his bottle cap leather belt, a fine example of creativity and a daughter’s love. He seemed to spawn fishing chatter with anyone around him and much had to do with the island. “The water just erupts”, “10 fresh squid on ten casts caught ten bass”, “I could see my shadow on the bottom from the rock I was standing on…” Each line would serve as fine opening line to any fishing conversation.

Empty brown bottles stood watch from slot-wall perches, someone asked how many had been humbled by a live eel and T.J. held another fisherman’s Guppy lure in a classic herring pattern. “That’s my wife’s favorite lure,” he told me. He paused. “I borrowed it from my wife, it’s her favorite lure. I lost it.” His voice had softened. I inquired if he had asked for permission first. “No” he said. There was nothing more to be said with the deed done and disappointment surely registered back home. 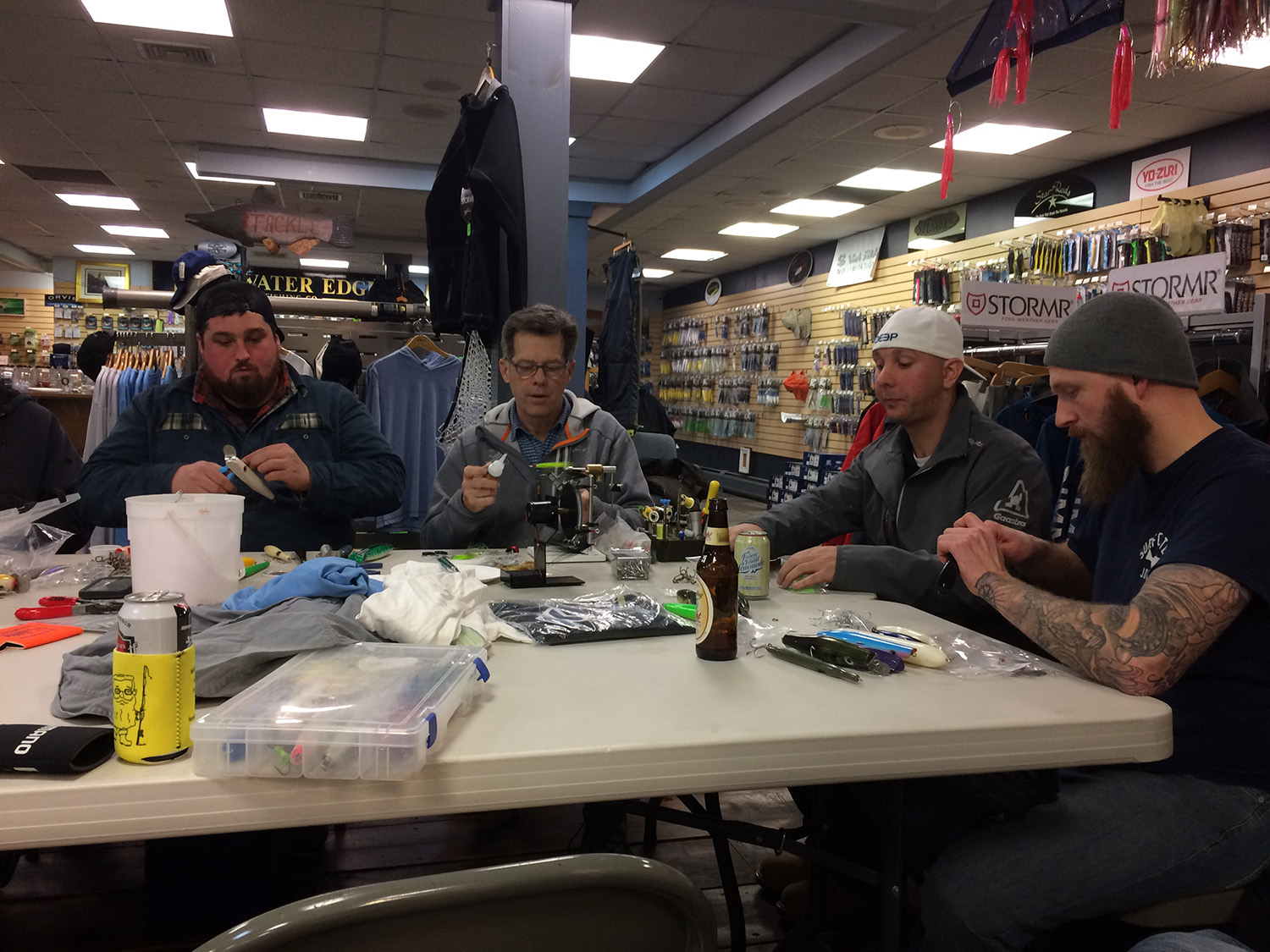 While Peter tied, glued and spun the last of his amazing custom color matched patterns, the cooler sat nearly depleted. The room’s buzz of classic rock, sadly without a psychedelic spin through some promised stellar 1977 Cornell University show, was interrupted by the collecting of plastics and donning of jackets. Some had driven from as far as Worcester to get a taste of an impending season full of promise.

For a few hours that night, Peter Jenkins made winter go away.