Carp is King With Dave Pickering

Dave Pickering took The Narragansett Surfcasters monthly meeting in a whole new direction. Dave walked members through his PowerPoint show, “Discover Carp Fishing,” a one hour pictorial of how to identify, fish for and catch some unbelievable North American carp. Typically speakers teach members some tips for catching stripers, bluefish, albies or fluke as members chew pizza and compare notes on sizes and gear. But this night, you could have heard a pin drop. Save for a few carp veterans, no one seemed prepared for the sizes of fish Dave and his cohorts are catching in very public local ponds and rivers.

“You’re going to hear about my secret life,” he told the room, pacing the floor. Dave knows his carp. In fact, Dave knows his stripers and just about anything else with fins. Once out of his dark coat and into the light of the Narragansett Community Center, he revealed the happy, sun-kissed smile of a man who spends lots of time on the water.  His pictures of ten, twenty and thirty pound fresh water fish landed in places as popular as Roger Williams Park were astonishing. 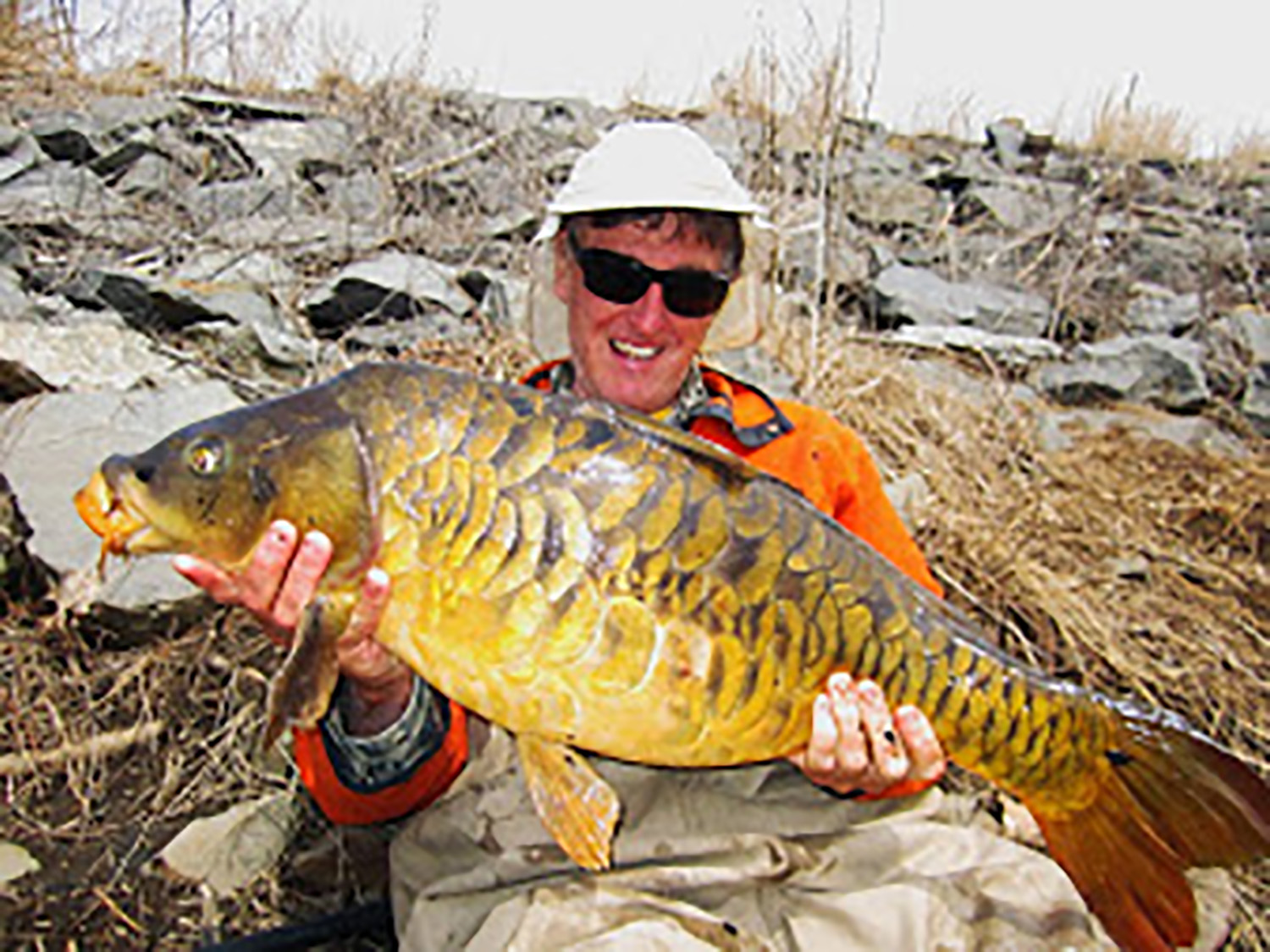 “It’s the fastest growing fishery in the United States, of any type of fish.” Dave beamed. North American carp, Cyprinus carpio, are members of the Cyprinidae family of freshwater fishes with a natural range all the way to the Black, Caspian and Aral Seas. Carp have endured overfishing, poor water conditions, largely due to our overuse of nitrogen based fertilizers (see a pattern here?) and frequent introductions out of their range for food, aquariums and for remediation of unwanted fishes. Their domestication for food has been documented as far back as the 13th century after the Romans hauled them to Europe’s Danube River and monks later raised and bred them for preferred traits.

Local waters hold common, mirror and ghost carp, all with fantastic color patterns and scales. They have a taste for sweet corn, maize, berries and doughballs and can weigh more than thirty pounds. Dave’s beat the state record three times but since the State requires you to bring the body into an official weigh station, which does nothing to promote catch and release, he’s not having anything to do with that. His record remains officially unofficial. Carp fishermen talk about beating their PB, or personal best. He’s landed several carp weighing forty pounds in Massachusetts waters and even more in the thirties in Rhode Island.

“No.1 fishery for mirror carp in the US is in the Blackstone River,” Dave told the room. Mirror carp, with their irregular, blotchy rough scales, appear distinctly different than the smooth scaled commons. Carp fishing has recently increased in popularity as fishermen look for new challenges. The primary draw of carp may simply be their size and aggressive fight, but it may also be that they have sat largely unnoticed for generations in local ponds.

Carp are stomachless and have jaws without teeth. They “chew” food by grinding a series of pharyngeal teeth against gill rakers on their last gill bow. Being omnivorous, they prefer greens, berries, small snails and the occasional worm. It’s important to remember that it’s illegal to use corn as bait in any waters where trout are present, stocked or wild. While science, regulation and tradition may not agree on any ill effects of corn on trout, there are other, equally effective baits for trout. If your local pond has a shadowing mulberry tree, that will be a fine place to target carp when it’s releasing its fruit. Carp will feed in stormy weather and day or night; they’re inclined to feed at night in areas with lots of daytime people pressure, like kids splashing or rafts of noisy ducks feeding on discounted Wonder Bread tossed from peeling park benches. 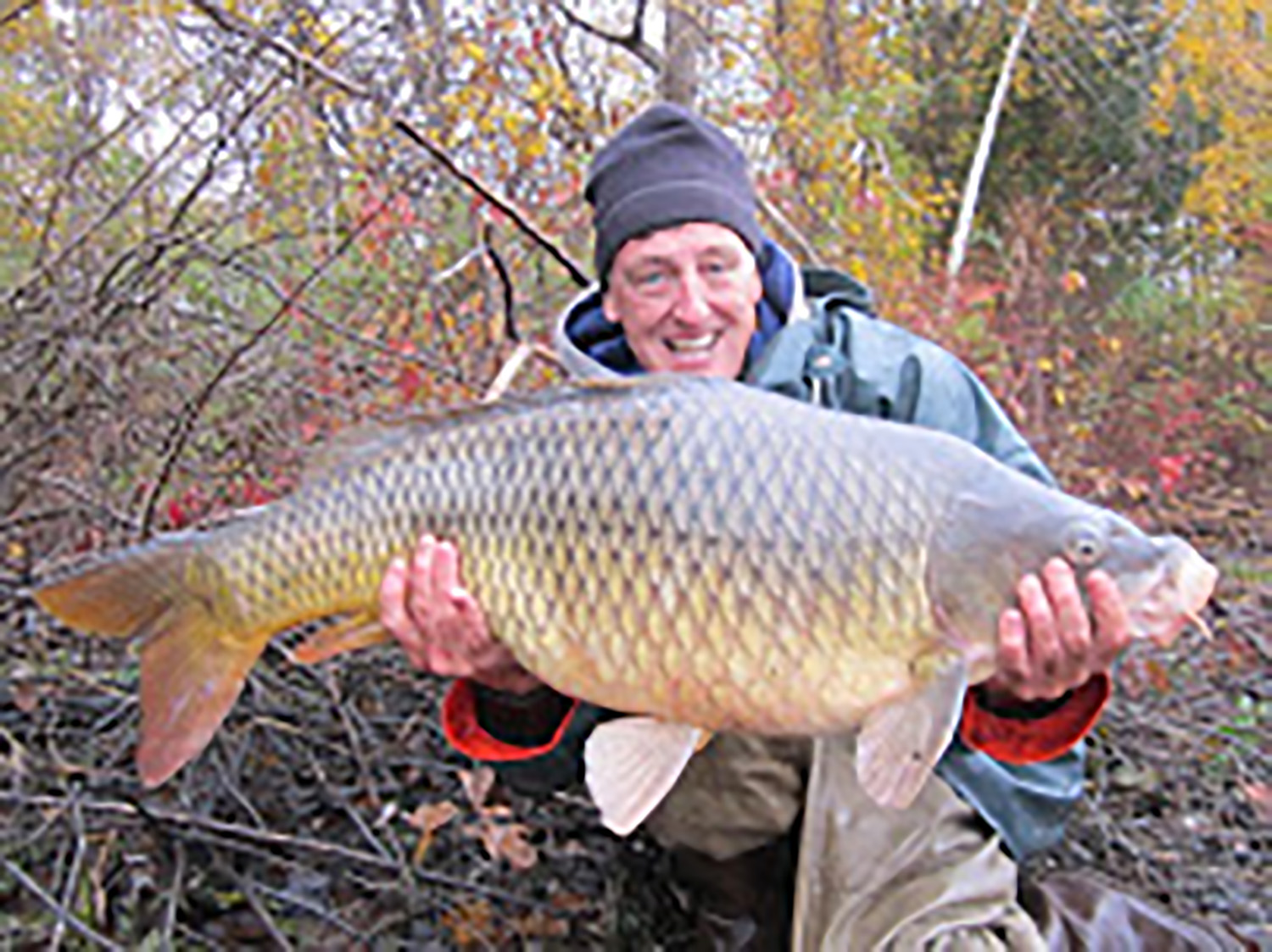 Carp fishing requires a fairly substantial financial investment. The gear is specific, well-designed and largely of European design but does have some overlap to large saltwater surfcasting rods. Because carp inhale and exhale their food as they decide to ingest it, the baits are small and rigged very particularly. Hair rigs, where one or two pieces of corn, chickpeas or maize are threaded just below the shank of a number 4 or 6 hook, are tied after a small leader and weight. Carp seem to be attracted to warm colors like yellow, red and pink. Yet another secret he gave up, saying, “This here everybody is using,” which actually makes it not much of a secret, was a sticky mess of bread, oatmeal, cornmeal and corn which gets fermented and packed around the weight to act like a chum ball.  Dave goes so far as to pour and paint his own weights so he can match colors to any staining of the water or bottom structure.

“Because these things hit without warning!” So says Dave Pickering as he stressed using the correct rods and reels, not just rigging up an old beach rod. “It has a panic attack and charges right off,” and he has seen several fishermen lose everything as the hook sets and the carp departs full steam ahead. Dave Henault of Ocean State Tackle recommends a 9’ Stalker rod with a 40-55 baitrunner reel. Baitrunners allow anglers to free spool line but re engage gears and the drag with a flip of a switch. Ronnie Lippe, a determined and very successful carp fisherman, prefers a 9’ English-made NGT rod with a similar baitrunner reel spooled with fifteen pound Trilene Big Game line. Ronnie has a PB of 27 pounds and is working hard to beat that. It’s a patient man’s sport. “It’s been a big waiting game, sometimes I go eight hours with no bites or days with no bites,” Ronnie told me.

Carp fishermen use extreme care when handling and releasing carp. He was concerned that new fishermen clearly understand the importance of that. The hashtag #keepemwet is a good reminder that big fish like carp need special attention, that pictures should be taken quickly. Many retailers like Dave sell special mats to lay the fish on for measuring, 42” wide landing nets which are easy on their scales and bags for weighing. Weighing scales should never be hooked into their fragile gill plates. Carp fishing is a refreshing example of fishermen self-regulating, enjoying and preserving a fragile fishery.

Dave Pickering is happy to share his secrets; you can read about his catches and more tips at ricarpfishing.blogspot.com. Next month’s Surfcasters meeting will feature Captain Jerry Sparks who will talk about extending your season and fishing salt ponds for holdover stripers.

A fisherman’s social, a bucket of eels & a sharp hook in the eye

It only took a few degrees of separation from cold and rain to warm up the shoreline and welcome back stripers. Squid have slowly appeared in the lower bay followed by a few tautog. From Jerusalem’s West Wall to the beaches of Jamestown and Newport, schoolies...
Keep Reading

Our 2021 Fish Wrap Writer Holiday Gift Guide will help you choose some fun, handy, thoughtful and maybe even perfect gifts for any outdoorsman or womann on your shopping list. We are very fortunate to meet lots of wonderful people and many of them create great products we can share with you. Happy Holidays!

A thousand clear acres of wind have been tearing though the seams and zippers of ice fisherman on South Kingstown’s Worden Pond. Huddled atop fast freezing holes, cold, still, heads down, parkas stuffed with fleece until they look like sausages, they have braved that...
Keep Reading

These are good days to be on the water. We have boat loads of options, locations and friends looking to share gas bills to find stripers, bluefish and mighty tuna. You just might want to be careful where you dip your toes around Narragansett as white and thresher sharks are patrolling in close. Really close.