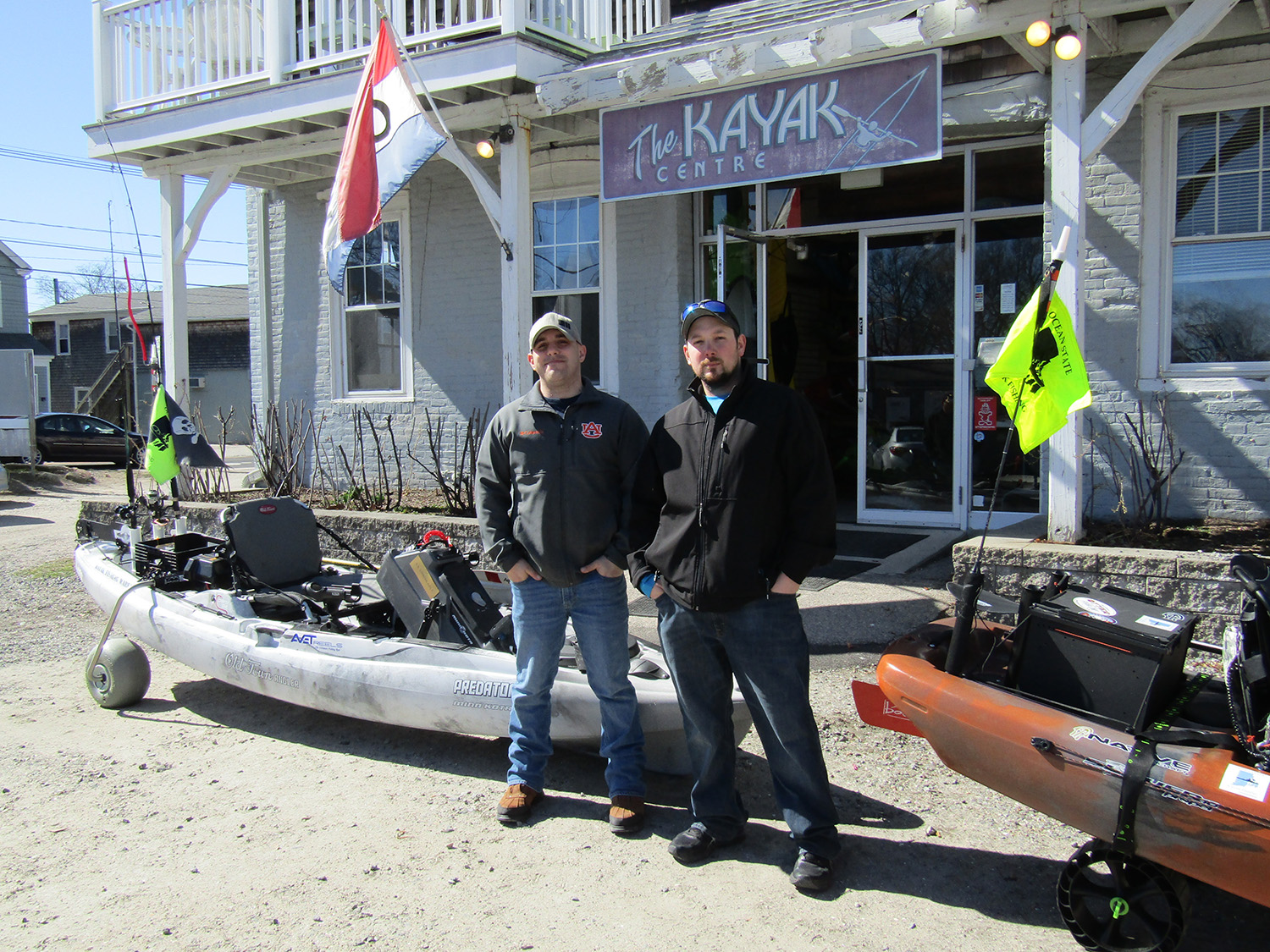 In 2015, a few kayak fishermen started a Facebook group to stay in contact, make plans to go fishing and encourage others to get on the water. Word spread, membership increased, anglers entered and won tournaments, the page became popular. Fast forward eighteen months and there are more than 500 members of Ocean State Kayak Fishing. 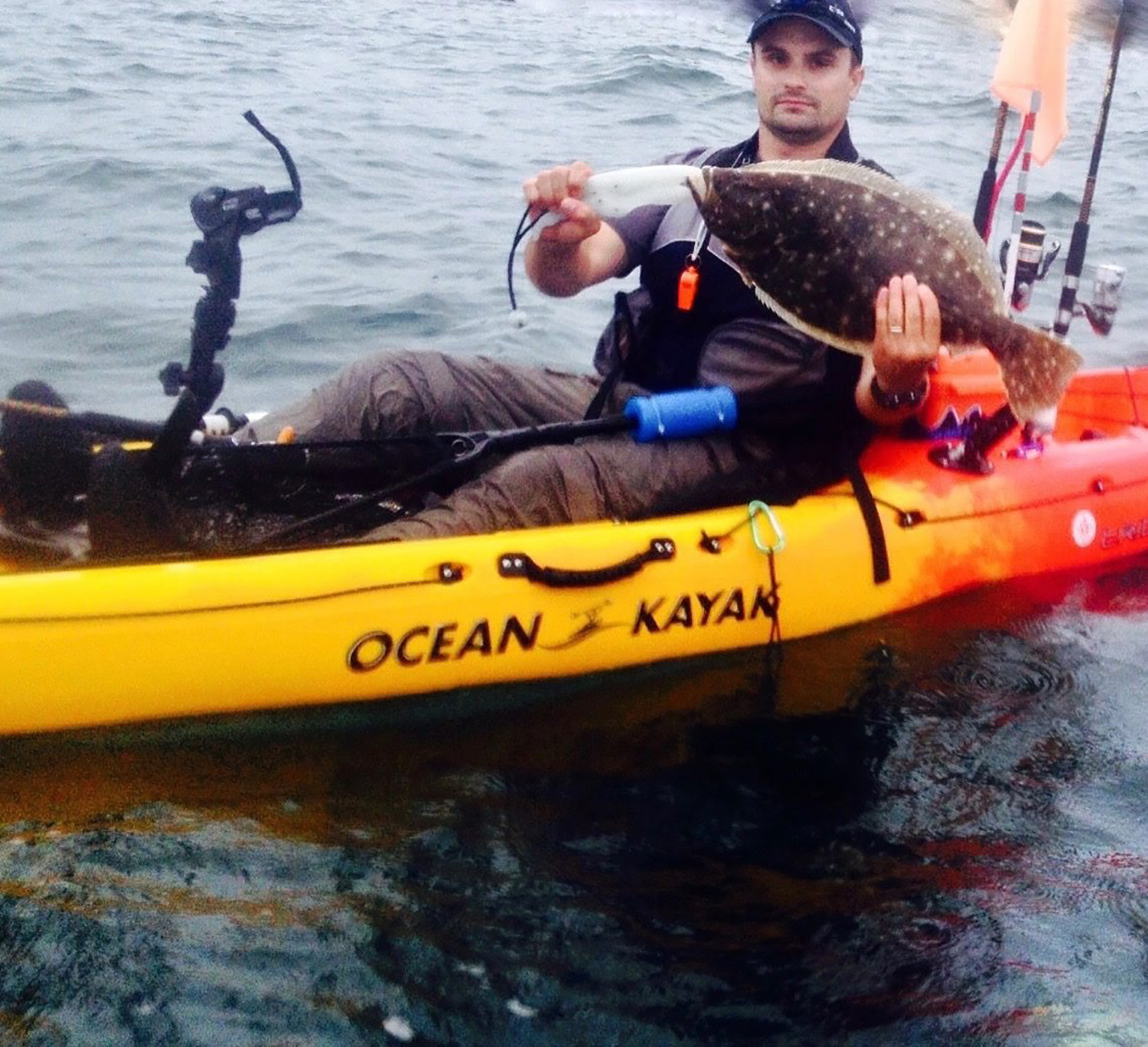 Jimmy with one of thousands brought to the boat

Jimmy Chappell, a founder and one of seven group administrators, helped organize a seminar on Sunday to get a jump start on Spring fishing and to put some names to faces. Some thirty fishermen of all ages and levels of experience packed the The Kayak Centre in the heart of Wickford to watch his PowerPoint show about safety, gear, best practices and lures. And to have a few laughs, of course. 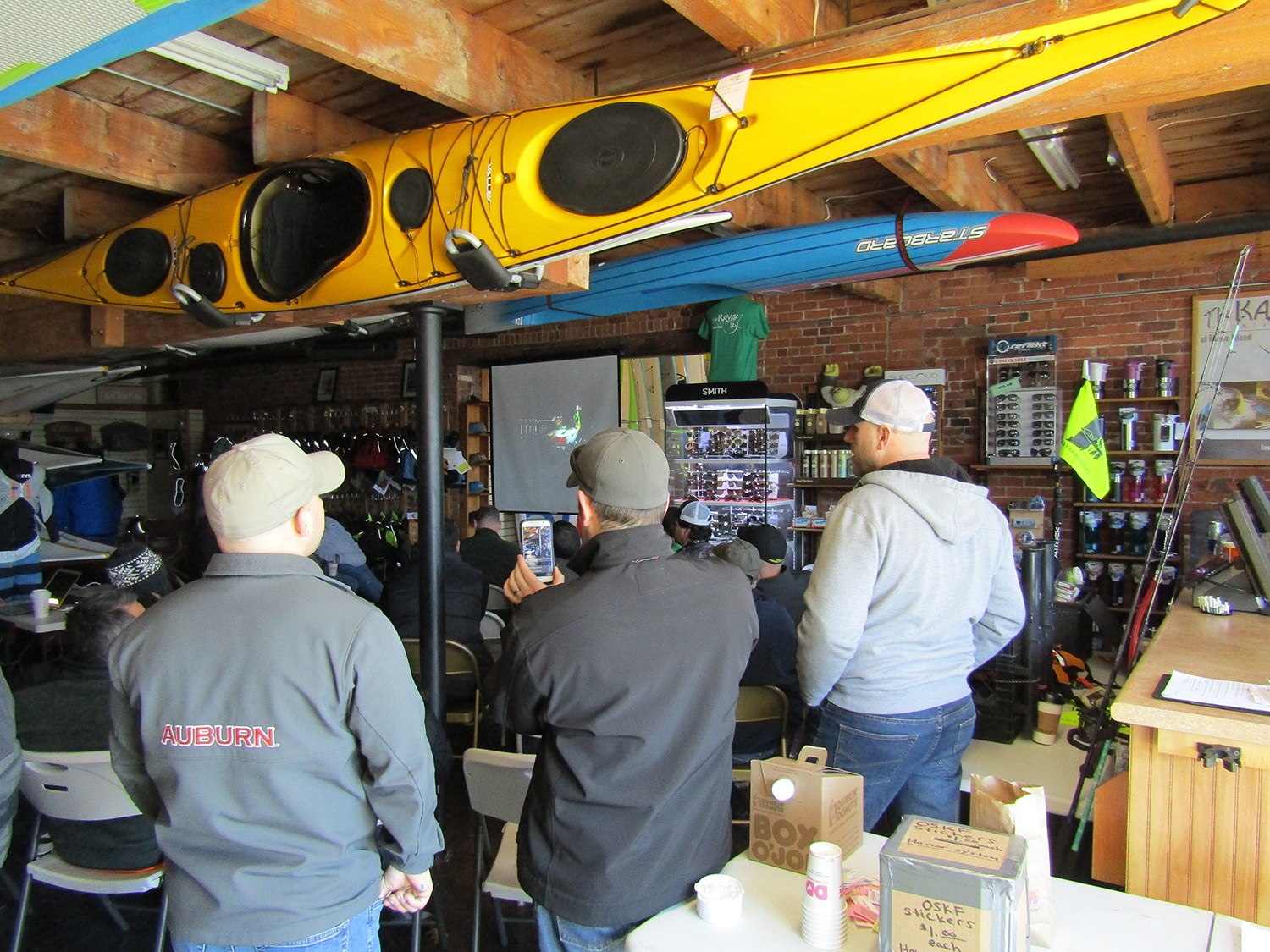 Introductions had the feel of a comedians support group. There were 25-year veterans of fishing in all manners, fishermen transitioning from center consoles to sit-on-tops and a few “just curious” and new to the sport. Most had some type of recommendation for the rest and all were glad to get out of the cold and talk fish.

“I do anything I can do to catch a fish,” Jimmy said proudly.

Working his way through his first ever presentation, he taught a roomful the basics of kayak handling, trip planning, rods and gear from shoes to flags. Starting in a new sport often means having to learn things the hard way, which hearkens back to why the group was formed in the first place. Jimmy recommended using rods which reach the bow of your kayak. “All my rods are seven feet,” he offered. “Fish will go past the bow so if you lean with that 6’6”, you’ll be in a jam.” Pretty basic and really critical. One very smart recommendation was carrying a simple safety mirror to shine at your partners when you’re on the fish, therefore not alerting the entire bay fleet.

Much of what works on their boats comes also from being frugal; these guys are all about the DIY mantra.They’re well aware that jumping into a new sport like kayak fishing or even moving from a 10’ surf rod to a 7’St. Croix Mojo, installing fish finders and electric motors can be tough on the wallet.

And you know you’re going to want more than one rod.

Jimmy pointed out a homemade leash he made from an old cell phone charging cord and a box store plastic clamp because almost everything gets a leash. Having unwittingly donated a pair of Maui Jim’s and a favorite pair of stainless pliers to a December salt pond, there’s no denying its importance and that’s precisely the ingenuity they’re sharing.

“I’ve got a serious problem,” Brian Hall whispered, somehow through an impossibly big grin, from the back of the room. 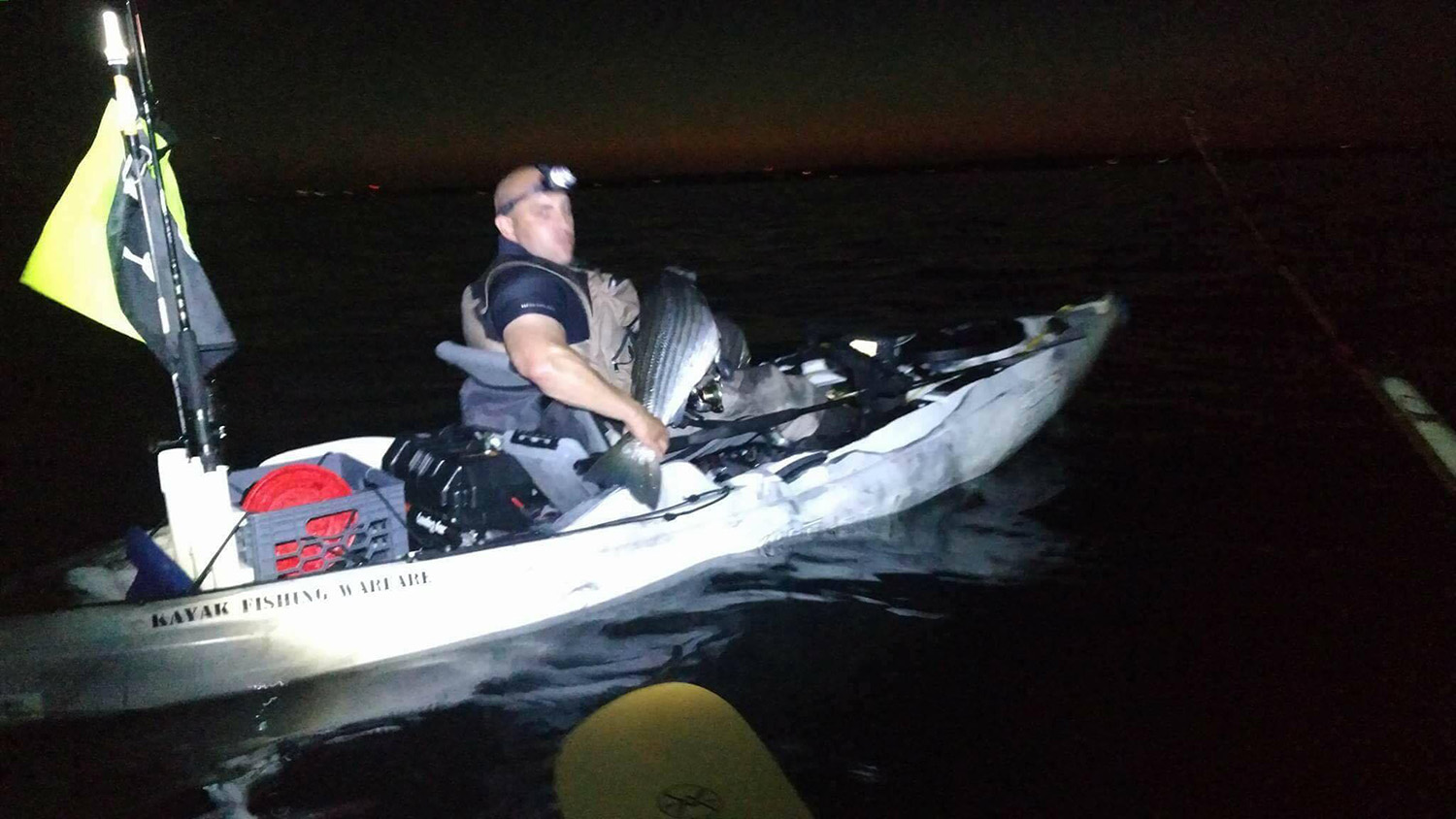 His words had the feel of a confession, like an admission he needed to work out in a room of sympathetic believers.

Brian is also an administrator with a passion for all things fishing. He commands an Old Town kayak powered by a beast of a center mounted motor. It’s a tank. It flies the Skull & Crossbones. It carries dual batteries. It challenges Nature’s forces with a brass plate proclaiming it the S.S.Unsinkable. It’s gunwales have lettering reading “Predator” and “Warfare”. I believe fish do fear him. And that kayak. He stores a tow line in a stern hatch, just in case. That’s just in case something happens to you, not him.

Brian seems to take a lot of good natured ribbing from his kayak fishing brothers, which often is part of membership. Remember what Groucho Marx said about clubs?

(I sent the club a wire stating, “PLEASE ACCEPT MY RESIGNATION. I DON’T WANT TO BELONG TO ANY CLUB THAT WILL ACCEPT PEOPLE LIKE ME AS A MEMBER”.)

Brian is also a military veteran with two tours overseas protecting us.

His service, on which we rely to safely and freely enjoy our pastimes and passions, is something which we should all contemplate and then shake his hand.

Dave Morton was there, helping guys maintain their reels

There’s a lot of information sharing with this group. It’s one thing to swap war stories about flipping or forgetting to pack a paddle but OSKF is raising the bar. Members talked of how reliable the 12” and 24” tube and worm setup works, especially when tipped with a fresh sandworm or an Otter Tail strip. They promote catch and release fishing, sponsor monthly casual contests, with sponsor prizes and honoring their catch and release ethos, you need only take a photo of the fish to submit it. They’re constantly reaching out to local lure makers, rod builders and repair shops to bring new gear and ideas to their members.

On May 7, OSKF will host their biggest event yet. Visitors inspect several styles of kayaks, try on PFD’s to find a perfect fit, see what innovative DIY ideas they have for boat and gear storage and best of all, be surrounded by people happy to answer questions. The event runs from 9 a.m. to 4 p.m. at The Kayak Centre in Wickford. The best deal might be that for a donation of $5 or five cans of food, you can try out any kayak models they have on display. It’ll be worth the price of admission just to see how these guys can rig out a milk carton. You might also want to ask how they manage to eat warm pizza while fishing.

Ocean State Kayak Fishing has some real momentum right now, as the sport grows in popularity and they continue to promote it. They remain true to their mission: it’s still just a fishing club, a group of friends who like to fish from kayaks, challenge one another, occasionally roast a brother or two, and make more plans to get on the water. You will learn more about them at www.oceanstatekayakfishing.com or at their Facebook page. Seriously, you have to ask about the pizza.

RIDEM has one more herring count site at Providence's Rising Sun Mills. If you haven't been there, it's a real beauty of a refurbished mill whose owners have a sincere desire to help the Woonasquatucket River that flows through the backyard. Where others threw...
Keep Reading

This week we begin a three part series looking into a proposal by Protect Rhode Island Brook Trout. Their work is genuine, guided by a desire to address a potential, not a past. They are four wise men protecting brook trout in Rhode Island and so far, will not be...
Keep Reading