This is the time. 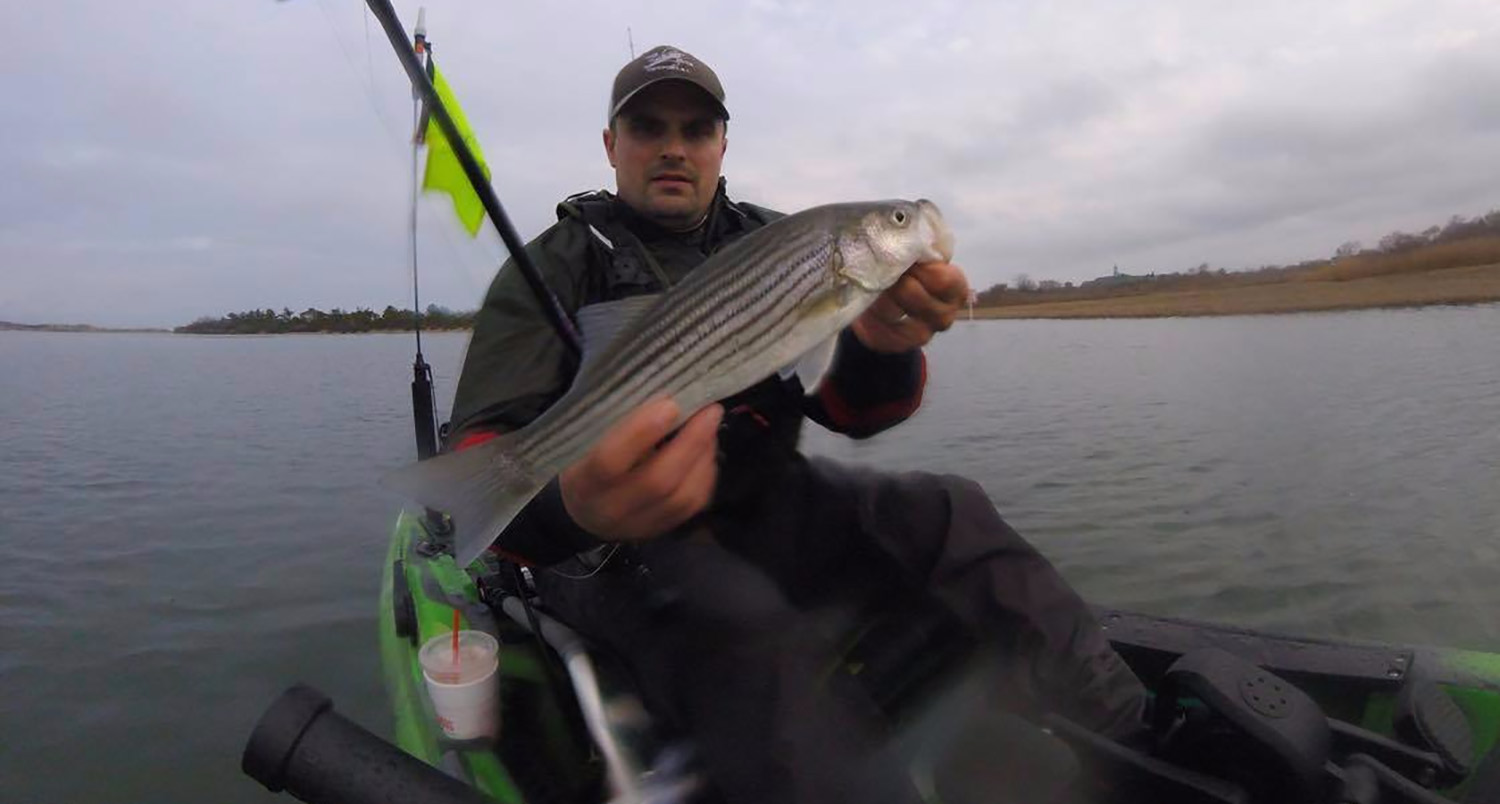 Bucktails, teaser flies, Cocahoe minnows. Seven foot medium weight rods for kayaks in salt ponds, ten foot surf rods for long beach casts.  Buckies, pogies, silversides. D.O.A. jerkbaits, topwater schoolie action and everything tipped with squid. Ready piles of fresh fluorocarbon leaders cut and tied last winter. Getting back into a fishing routine, remembering we really can get out of bed to fish before work and how good it feels to put fishing before work.

Dave Henault at Ocean State Tackle has been keeping a close eye on the fishing scene. He noticed that the nice run of squid over the last few weeks had moved out but now seems to be back in force. The presence of squid, river herring and menhaden is key to attracting newly arrived stripers. He also reported that, “tautog have been outside but are now moving into lower (Narragansett) Bay.” From now until May 31, you can keep three tautog per day with a 16” minimum measurement.

Stripers are all over the south coast. With a historical first point of call being Pt. Judith’s west wall, there are hundreds of fish to be caught. One fishermen, who absolutely is of the die-hard, fish now worry about stuff later crowd, reported he had already landed 600 schoolies and that was more than a week ago. Partial truth-stretching? Perhaps, but the point is made that there are lots and lots of fish moving into the beaches.

If angling from a rock in a hard place is not for you, stripers are being caught along Narragansett Town Beach, in front of the sea wall and points south. Parking is still free in the town lots and it’s an easy, enjoyable walk north or south to find birds and fish. Newport has pogies so keepers should be there any day. Salt ponds still hold holdovers too stubborn to leave or too happy to feed on a new year class of protein-rich baits. Jimmy Chappel knows. 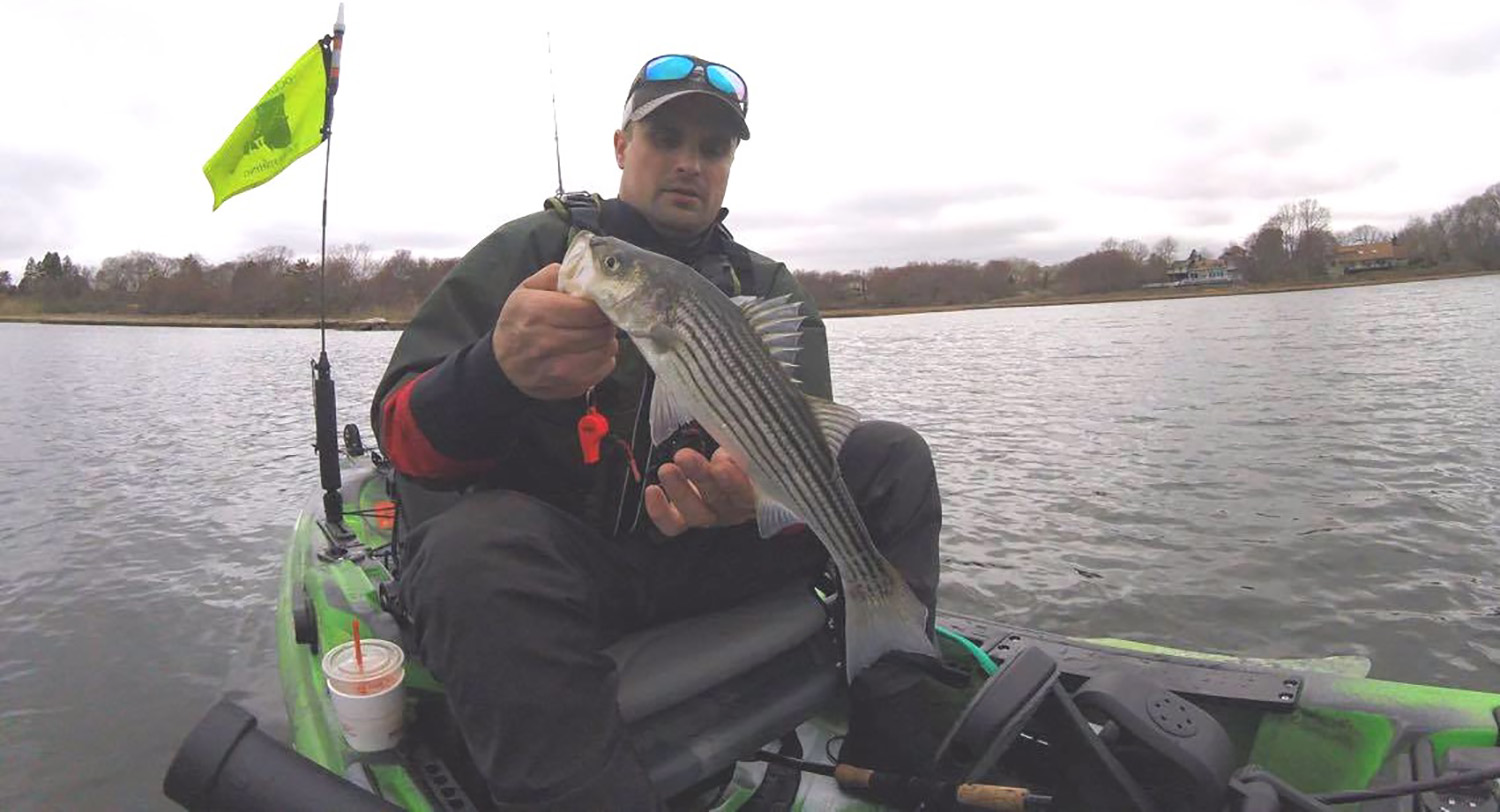 A founding member of Ocean State Kayak Fishing, he’s already put in lots of time searching for stripers. The man catches some serious fish. You can meet Jimmy and other members at the Ocean State Kayak Fishing Expo on May 6 and 7. For two days you can also try out more than one hundred kayaks and SUP’s as part of the Kayak Centre’s In-Water Demo Days at Wickford’s Town Beach. OSKF will have all types of kayak and fishing gear available from vendors like Humminbird, Otter Tails, Fancy Fluke, Born to Fish and Crafty One. Admission is $5 but they prefer five cans of food for the North Kingstown Food Pantry. Members will be ready to answer your questions and tell a few tales. If you or someone you know has any interest in fishing from a kayak, OSKF is the perfect place to start.

They run several fun, friendly contests, absolutely support catch and release and continue to grow as a group of brother fishermen. The Expo runs from 9 a.m. to 4 p.m. at 9 Phillips Street in North Kingstown and you can always reach out to them on the web at www.oceanstatekayakfishing.com.

Elisa Conti Cahill at Snug Harbor Marina reported a decent run of schoolie size bass around the walls and South County Beaches, noting that BJ Silva of Flippin Out Charters has found some squid in the upper bay but none so far in the southern reaches. Elisa said, “Steve Tombs tagged 46, 10”-18” stripers in Point Judith Pond with Captain Al Anderson aboard his charter boat, ‘Shearwater.’” Well done.

Without question, a real joy of Spring is the return of Elisa and her reports.

Elisa’s larger than life smile, those groovy glasses, her perpetual motion and unmistakable voice are all excellent reasons to bum around a tackle store to see what’s new and what characters might pass through her doors. 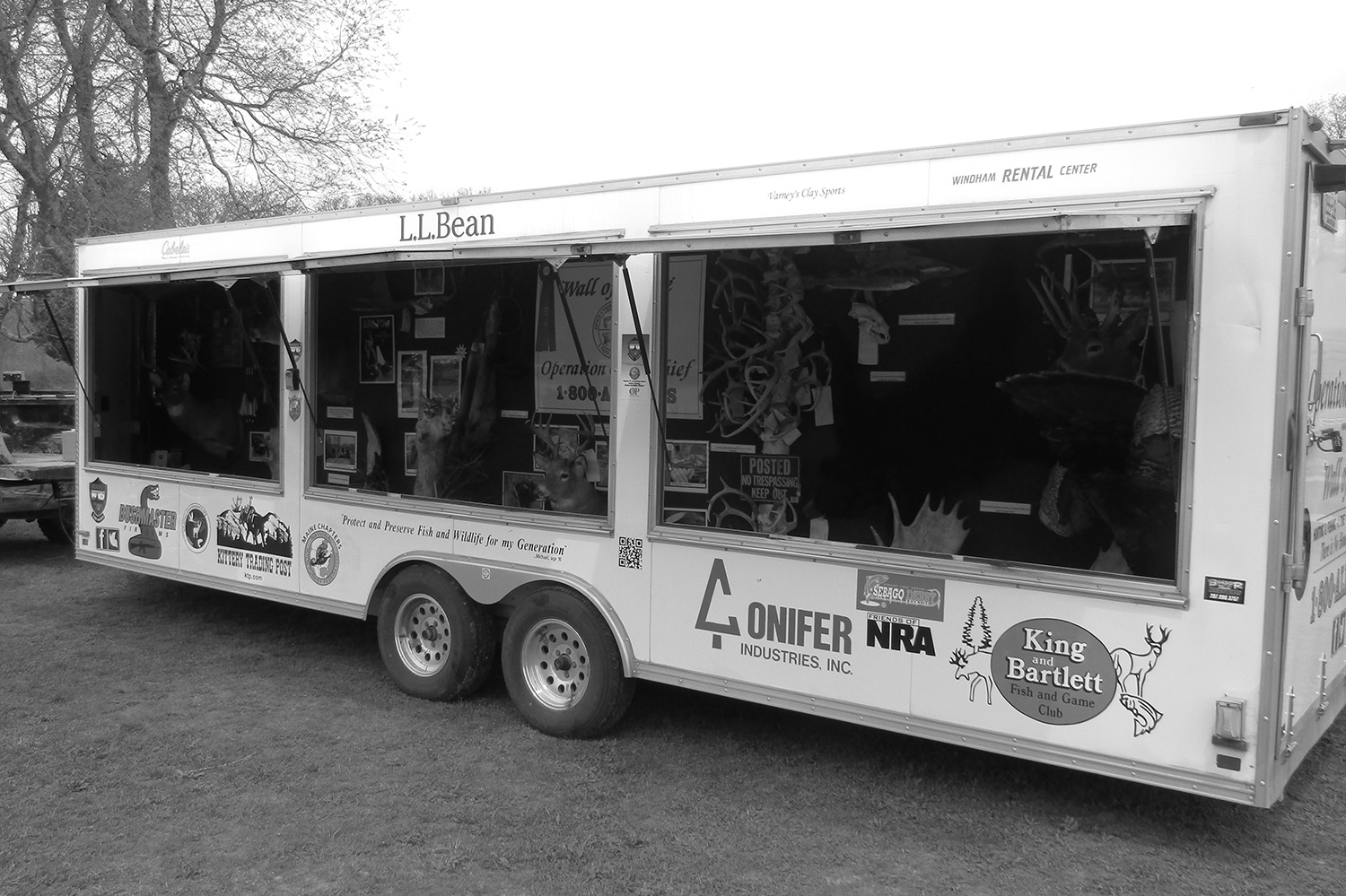 the travelling Wall of Shame

More than 90 shooters and supporters filled the stands at the Peace Dale Shooting Preserve on Saturday for the International Wildlife Crimestoppers shoot. Environmental Police Officer Mike Schipritt helped coordinate the day in support of our DEM’s membership in the group and also to raise awareness of their “Operation Game Thief” program. As sportsmen lined up for Del’s and dinner after the shoot, he spoke about his desire to bring the program to our state. We’ll cover this in more details at another date but the short story is, OGT offers rewards for information leading to the summonsing of poachers and illegal hunters. It also supports a travelling Wall of Shame which displays those who ignore the basic and legal tenets of responsible hunting and fishing. RIDEM works hard to preserve our resources and this will be one more tool. 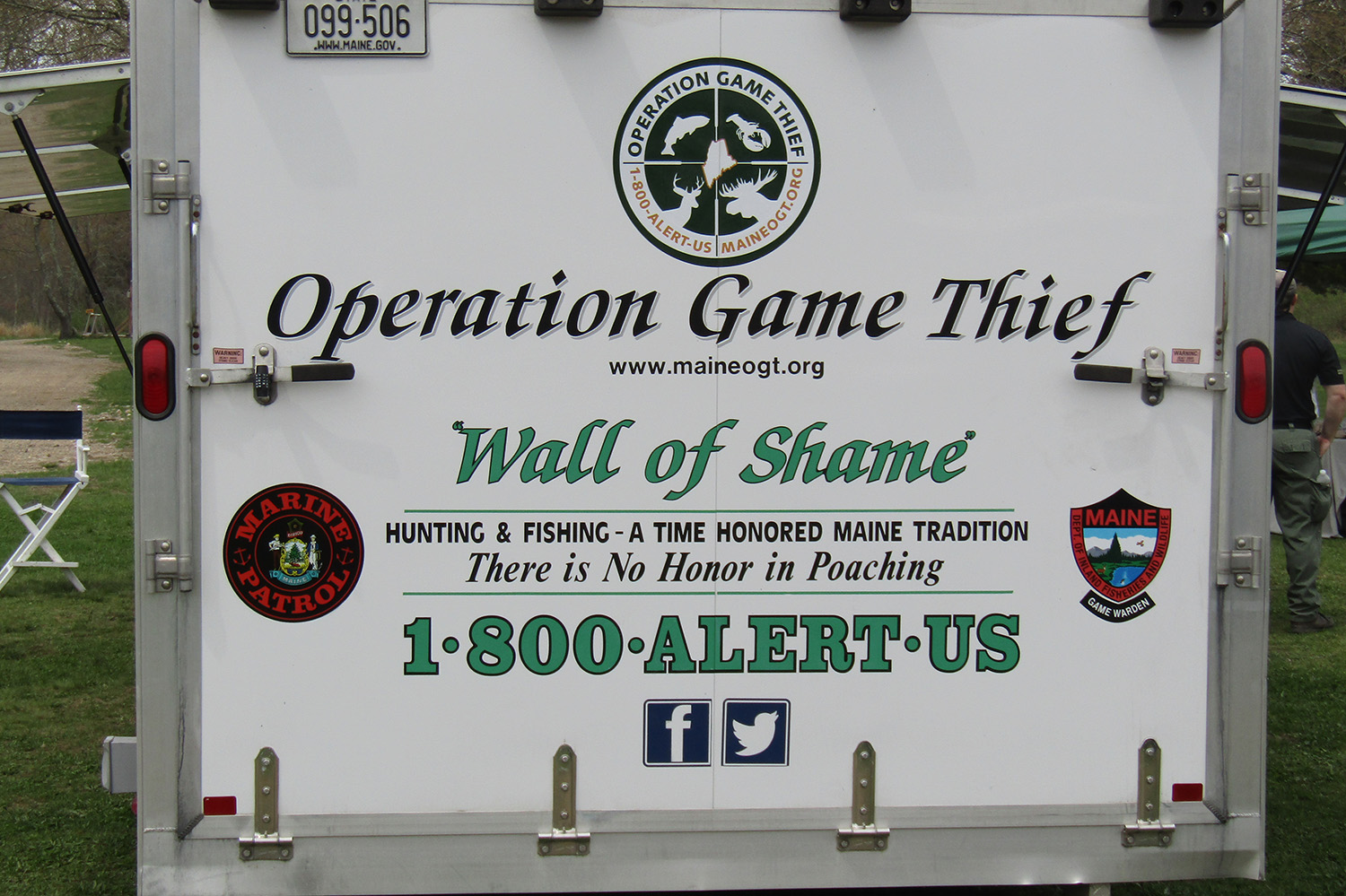 “Hunters are wildlife managers. Poachers are just thieves,” said Lewis Rather, Executive Director of the IWC.

Lewis travelled from Texas to support our RIDEM and he was happy to do so. With his southern charm, grizzly strong handshake and easy manner, he represents members in 41 states and nine Canadian provinces. Poaching includes fishing and already we have seen several notable seizures of greedy fishermen abusing striper and trout stocks. 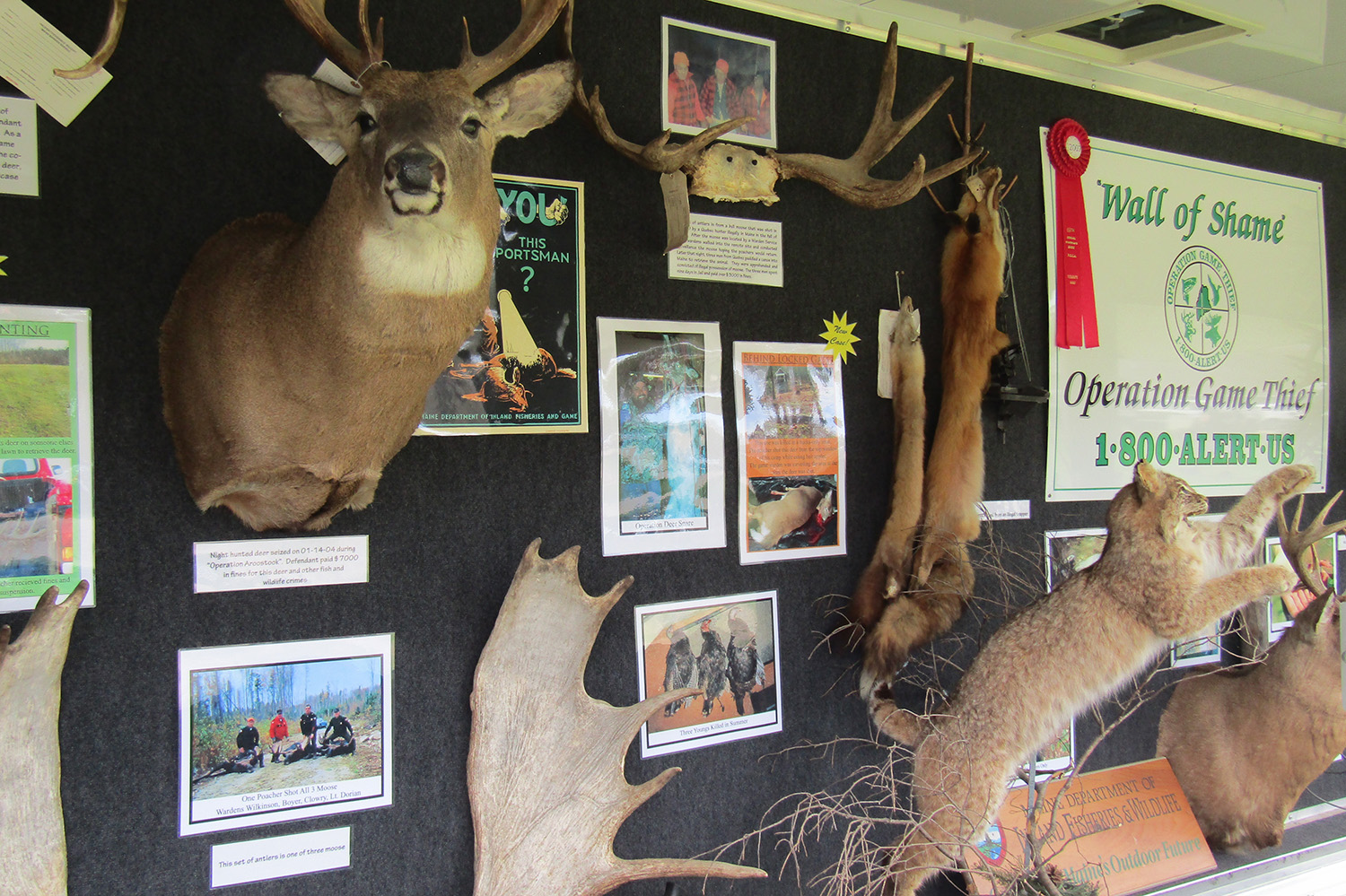 The now famous Maine wardens manned their own travelling wall of shame full of deer racks, bear pelts and seized firearms while the final scores were tallied in the shadow of the Preserve’s under construction post and beam indoor shooting range.

Winning shooters were Todd Anderson for Top Male, Mallory Crowell, who travelled from Texas to support our DEM officers, for Top Female and 12 year old Ian Brayman for Top Youth.

Fishing and shooting in the same day? This really is the time.

Tear off the November blotter, look for right day and there just may be a few false albacore left along the beaches. Here’s how to catch them.

The 2022 RI Tog Classic was a success by the ever-grateful and not exaclty soft spoken Ralph Craft. A cast of hundreds from here to Florida came to fish for our bountiful tautog fishery, which we really need to protect and then, a young angler named Rosie stoll the show. The best wrap up is right here.