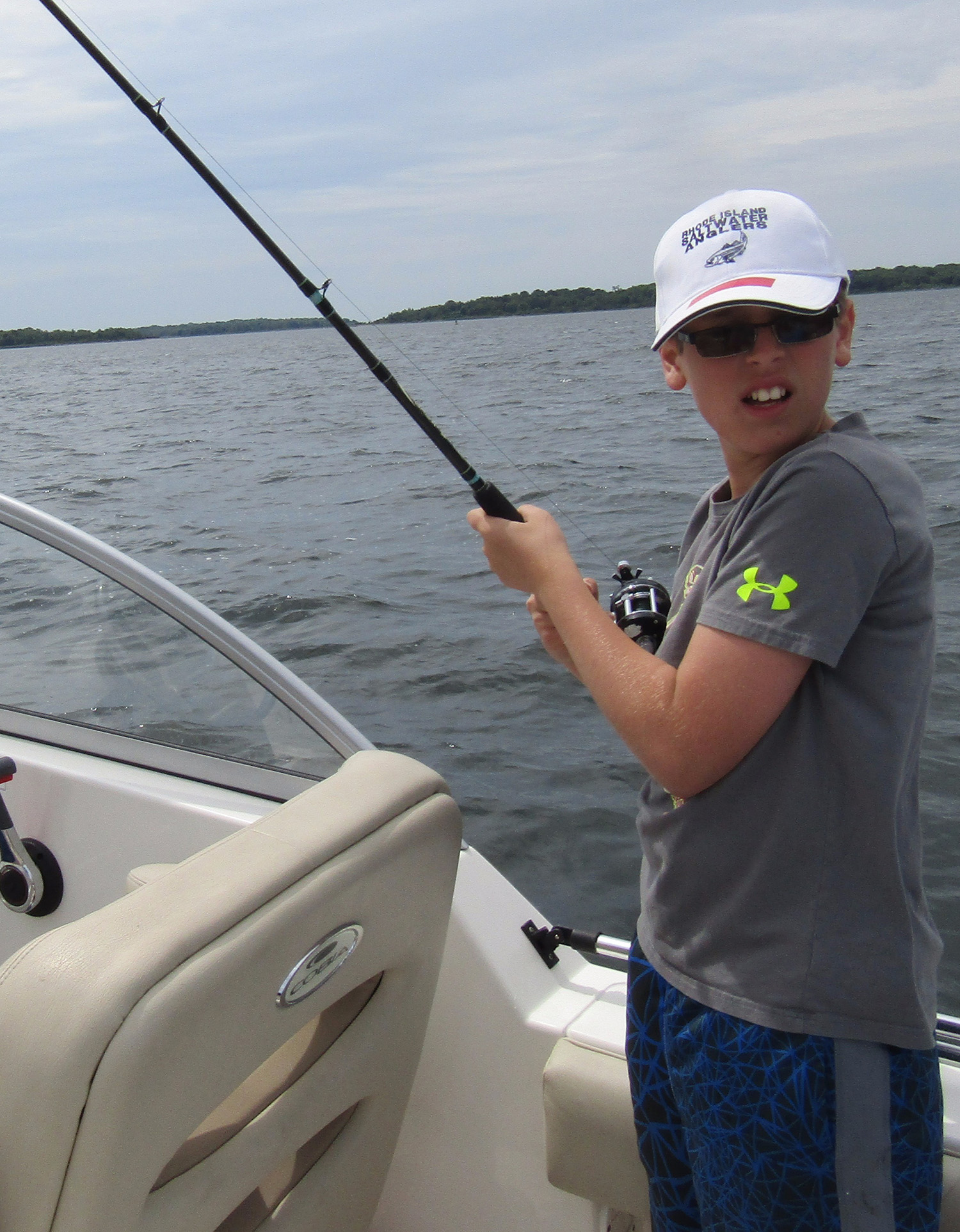 “Whatever I catch, I’m going to say it was three times bigger.” 13 year old Tim Roberts started a day of fishing by sinking my writing plan. Drifting along Warwick Neck in Captain Tim Wordell’s bright white Cobia, the younger Tim was a camper with the R.I. Saltwater Anglers Association Youth Fishing Camp held in the shadow of the Rocky Point arch. He was all business when it came to jigging squid strips with a sense of humor welcomed by us old salts and he had the hot reel all morning.

The camp was a straight out success.

RISAA holds a three day fishing camp each summer for 50 very lucky young fishermen. President Steve Medeiros and members volunteer their hours and days to teach kids how to tie knots, sling a surf rod for distance or accuracy and understand what bait catches what fish. There were kids who wanted to learn about fishing and the lifetime of joy it brings mixed in with a few there to flip plastic bottles when no one was looking and eat endless hot dogs and chips but that’s what camp is all about. Sure, our children are pretty focused on electronics, endless games, texting entire conversations before most of us could locate our phone and sitting for hours winning virtual candy trophies, but for those three days, it was cell phones off, enough with that annoying bottle throwing and all eyes on the water. 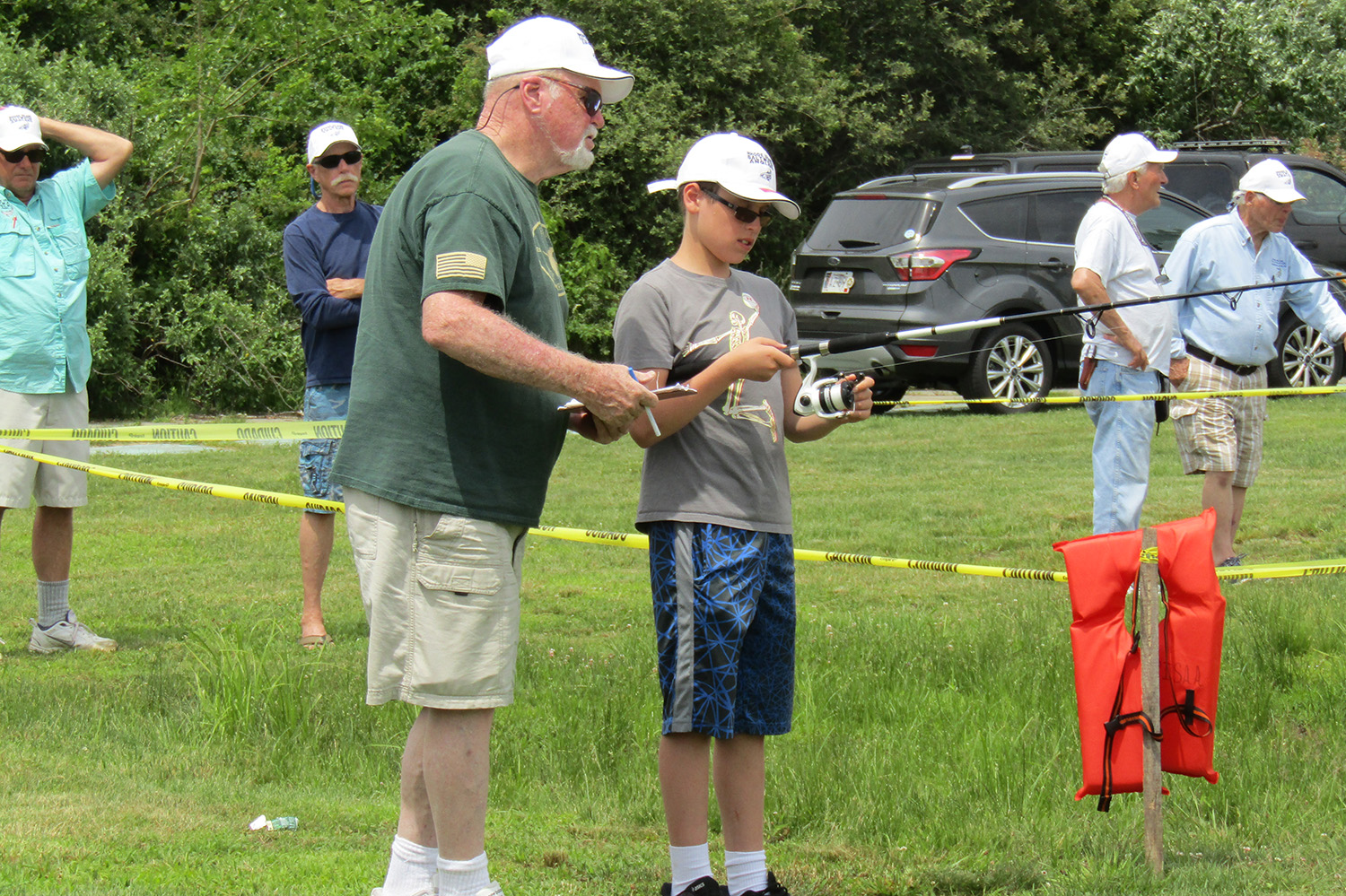 The first day was all about learning the ropes, or the lines, as it were. Kids’ thumbs may be fast as lighting when LOL-ing and OMG-ing but skills learned for being on the water are more important than ever. It’s no stretch to equate those awful math lessons kids endure, knowing they’ll certainly never ever use math when they grow up, with the ancient arts of knot tying, splicing, stowing items properly, basic boating skills, even just how to read a compass. RISAA teaches kids skills to serve them for a lifetime. 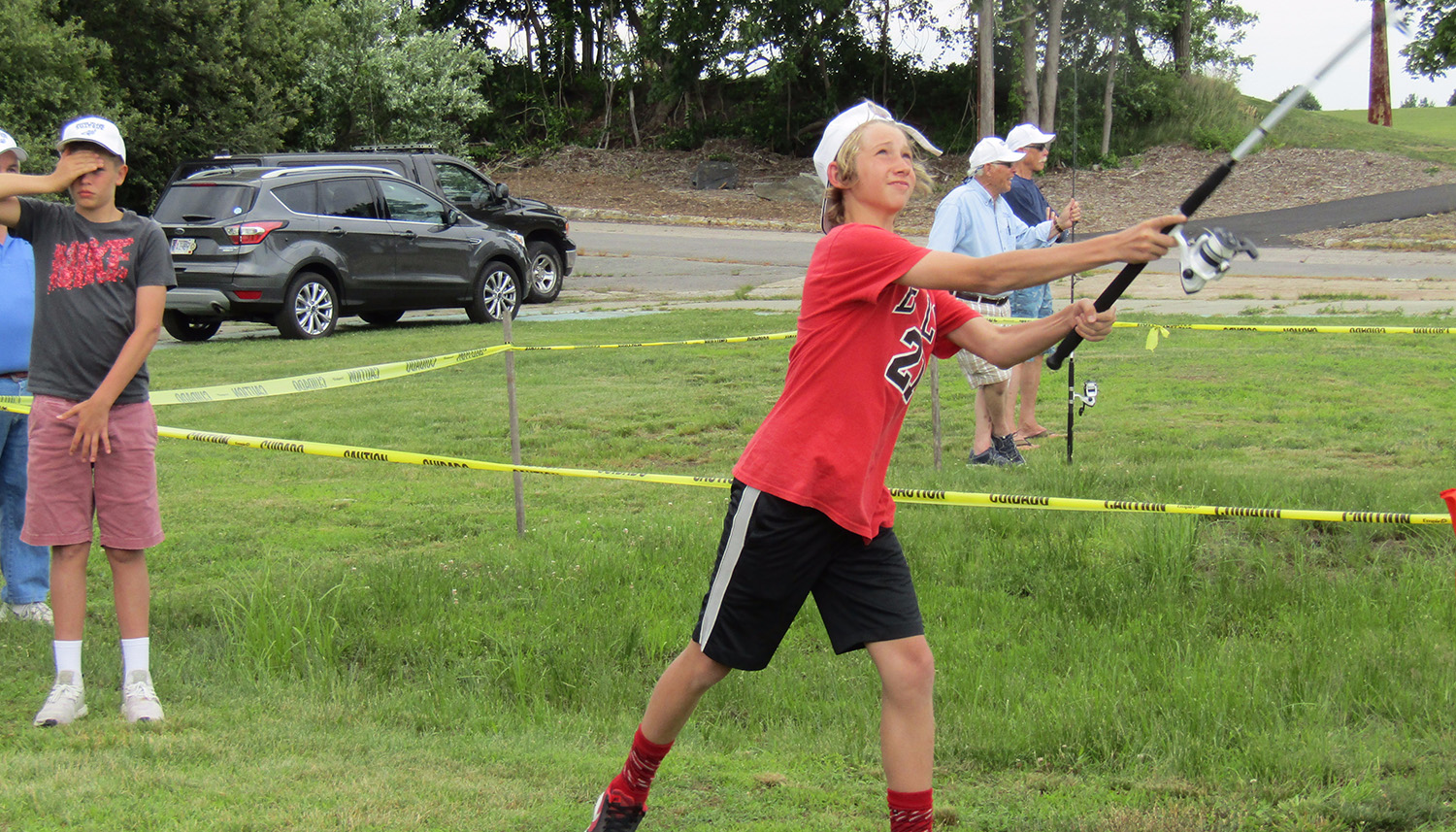 Day two included a trip on the Seven B’s from the port of Galilee.  Great fish like fluke, sea robbins, scup and sea bass were hauled up and over the sides. Like all three days, lunch was cooked for the campers; RISAA operates with almost surgical precision with members all having jobs, with nothing overlooked. Job one was keeping kids safe, happy and fed. Camp is all about catching first and releasing second so all that was caught was then returned, often much to the dismay of a few of those happy campers. Helping them to understand that joy of fishing was a primary goal; when young fishermen and fisherwomen accept that times and oceans are changing, that seas are not the endless resources we thought they were, the sooner we might return to the partial bounty our elders enjoyed. So they just caught and released lots of fish. Plus, that makes more sense than sending kids home with plastic bags of warm fillets which just might go unnoticed until laundry day. 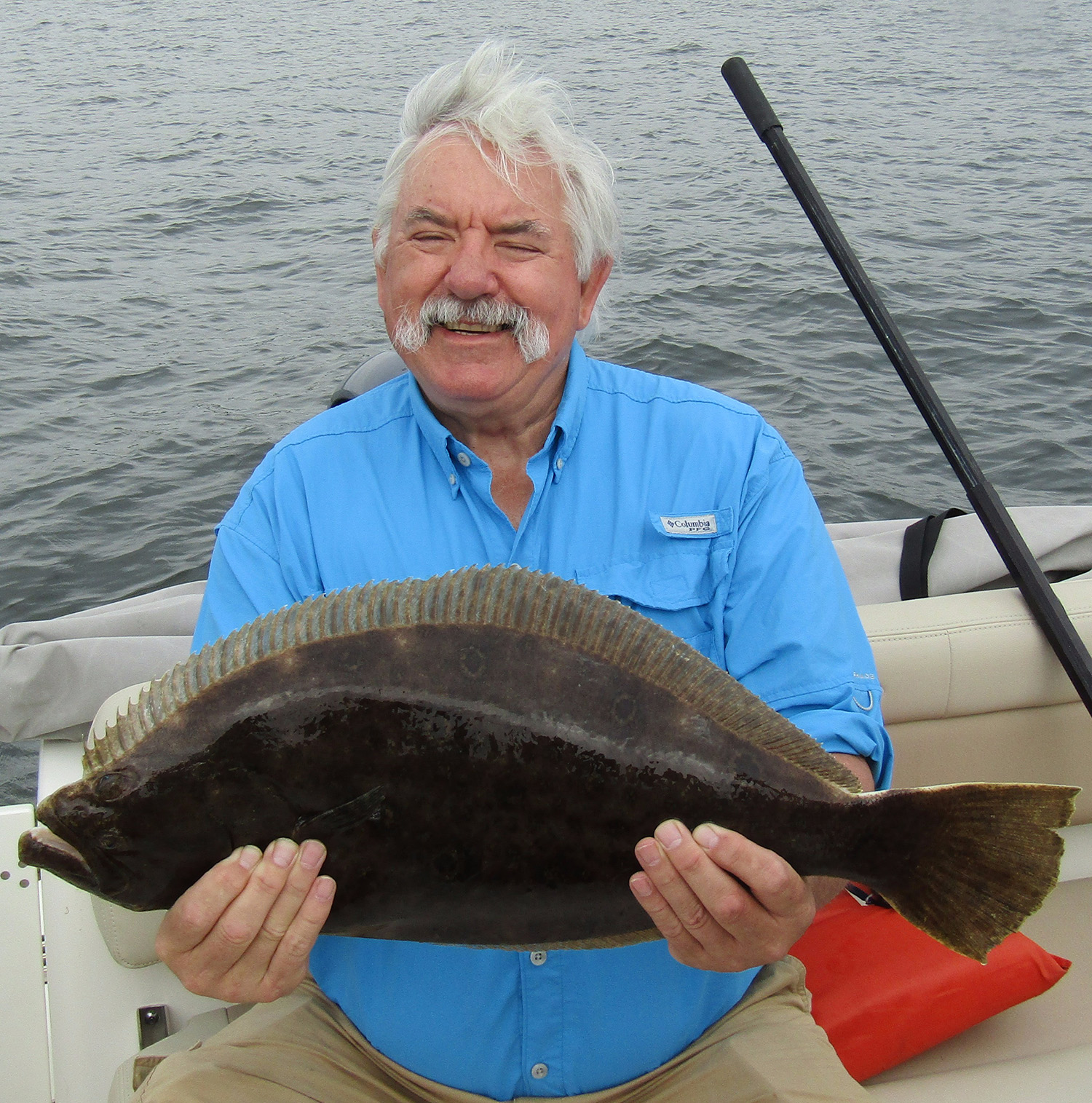 It wasn’t just kids who were hauling in the fluke

On the third day, it was game on. RISAA members skippered their personal boats to Brewer’s Greenwich Bay Marina to take kids fishing on Narragansett Bay. Stepping from the plush motor coach, Young Tim asked me, “As a writer, do you get to exaggerate a little, you know, about fish?”

I was floored by the audacity of someone so young to question the honesty, integrity and absolute accuracy of a writer, a fishing writer no less. Later, finished with professional inquisition, after 15 seconds into the first drift, Tim started hauling in fish. 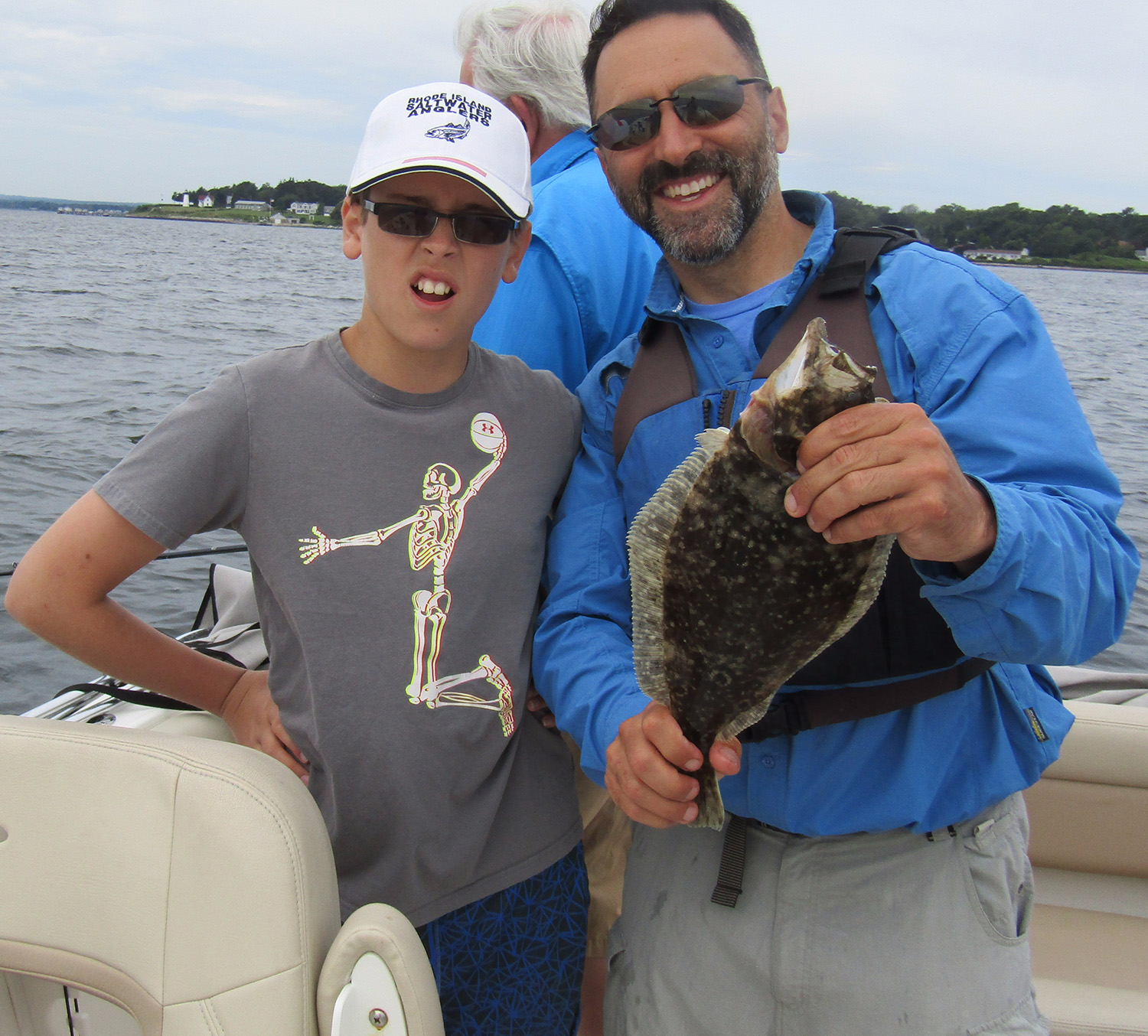 Captain Tim was all about blasting Sammy Hagar when drifting over fluke bottom and Tom Petty when stripers were near. They weren’t. Young Tim and fellow camper Miles were more about a popular singer who goes by the name ‘Lil Yachty, ironically. Together they called out to Poseidon, “‘Lil Boat! ‘Lil Boat!” It seemed to help as the two caught dozens of fish on the drop from 35’ to 45’. “Freefallin’” played to no avail.

Carefully observing his skill and natural ability to chit chat, reel  and laugh all the while, Tim asked, “Are you writing this down?” as I wrote everything down.

After a few hours of drifting, catching, releasing and more laughing, Captain Tim turned back toward the marina and shelter from darkening skies and freshening Southwest winds. While campers waited for the coach for transport back to camp, where a catered lunch awaited, numbers of fish caught mysteriously seemed to increase as talk became louder and hands stretched farther apart.

Back at Rocky Point, lunch was served, bottles were spun and heads were constantly counted. “I have 11 kids. As of five minutes ago, anyway,” said one volunteer as a his never really missing camper emerged from a Port-A-Jon. Apparently those plastic outhouses have remarkable cell phone service.

Skills were reviewed prior to the awarding of certificates of graduation. 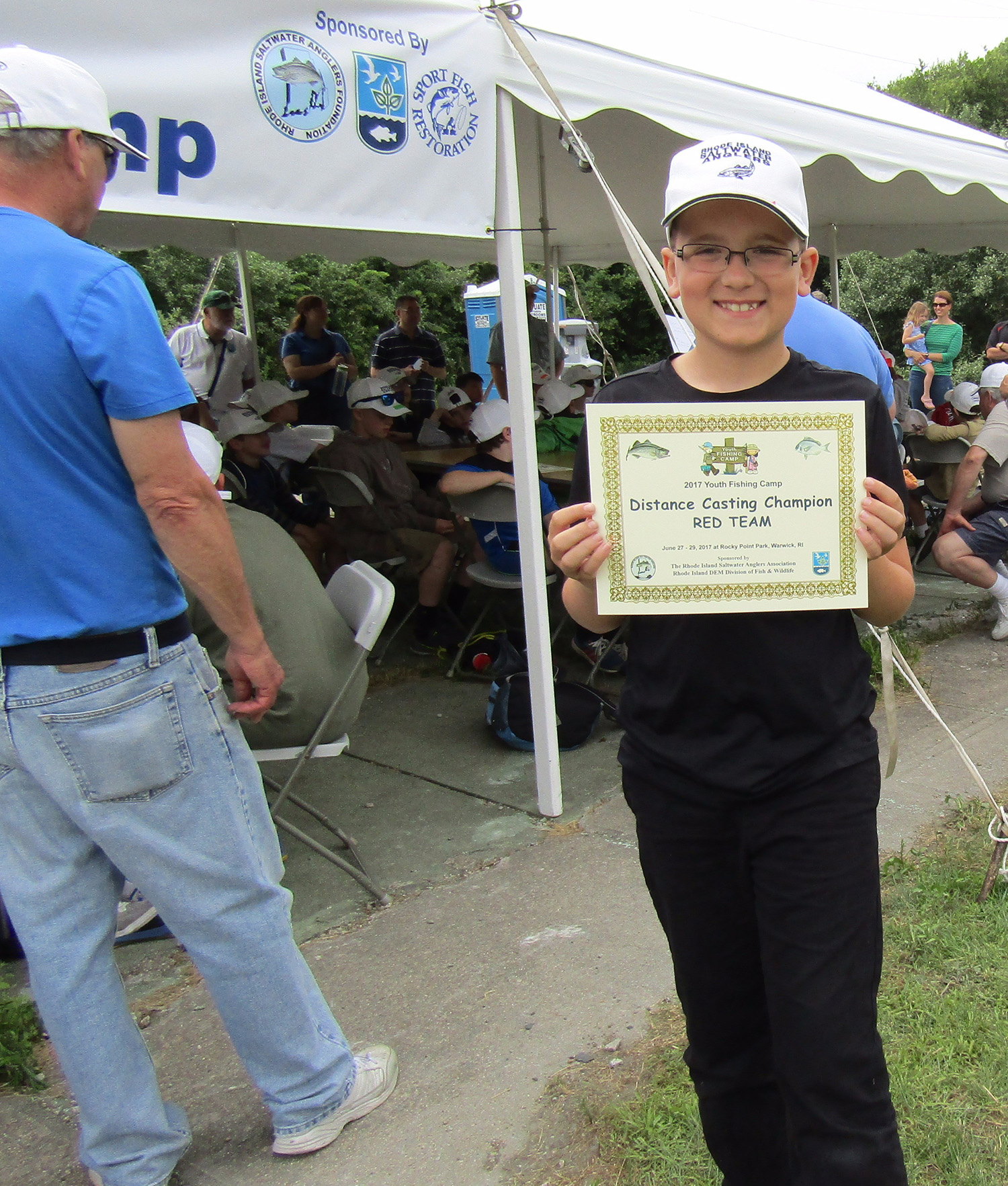 One angler, quizzed about what knots he learned, answered, “You know, that knot that goes up then around, like two times then goes over there…” The concept was there, his hands just needed a touch more practice. With the last camper headed home, RISAA members quickly turned to clean up mode.

Lessons taught by volunteers, practiced on boats and passed on to new generations are all important in this busy age of distraction but it was the twinkle, the sparkle kids get when bragging about catching that was the true reward for the many RISAA volunteers.

Now is the time to renew your outdoor hunting and fishing licenses. Saltwater fishing licenses expired in December, freshwater licenses and stamps will expire soon. In this article I explain all the details and what you need to do to be ready to fish or hunt the 2021 season.

This month we have long days and warm nights to fish but by month’s end, we should take a night off from the beach and learn to catch more fish in Narragansett Bay. The Rhode Island Saltwater Anglers Association will present seasoned and generous fisherman, Greg...
Keep Reading

Writing a fishing column requires lots of time looking to the water but not out the window, lest you see how much fun everyone else is having catching actual fish. In spite of this and my editor’s looming deadline, four of us waded into the Salmon River last week, a...
Keep Reading