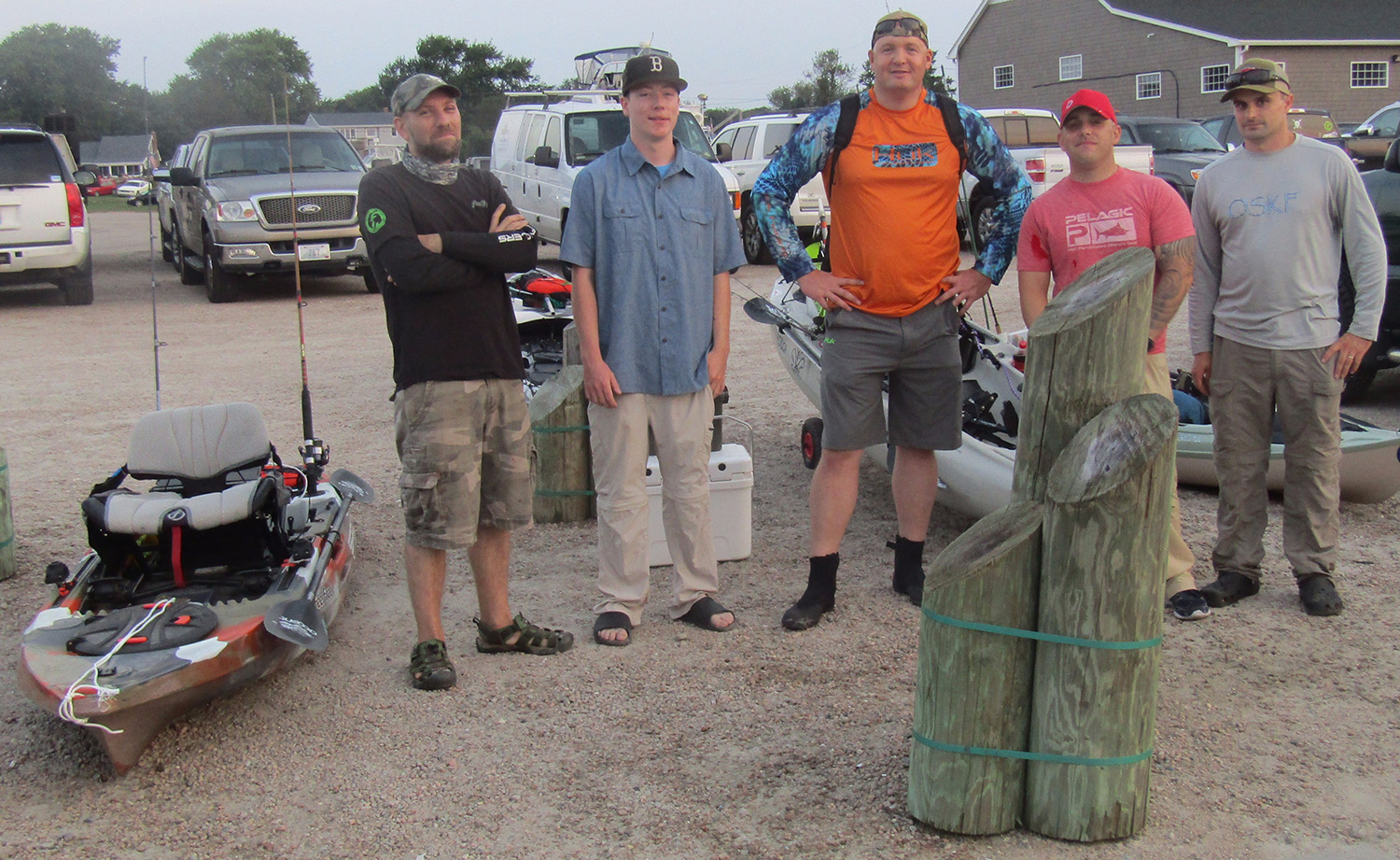 I mean, really, look at these guys, what could possibly go wrong?

At 5:00 a.m., kayaks were being unloaded in a dark dirt parking lot. Gulls stretched their wings and walked about in only the earliest hint of a calm new day. When all six boats were staged, six fishermen in an impossible array of colors and camo’s smiled for the day’s first picture. Paced by an emerging pink skyline, the Ocean State Kayak Fishing group wedged kayaks and gear onto Captain Brian Bacon’s Big Game II, a smart, beautiful Carmen 36 until her deck was reduced to standing room only. For months they prayed for fair weather. With a plan to steam at 22 knots, possibly enjoy a quick breakfast beer then arrive at the south of Block Island where Captain Brian would toss them overboard to fish for stripers on some greasy flat seawater, what could possibly go wrong? 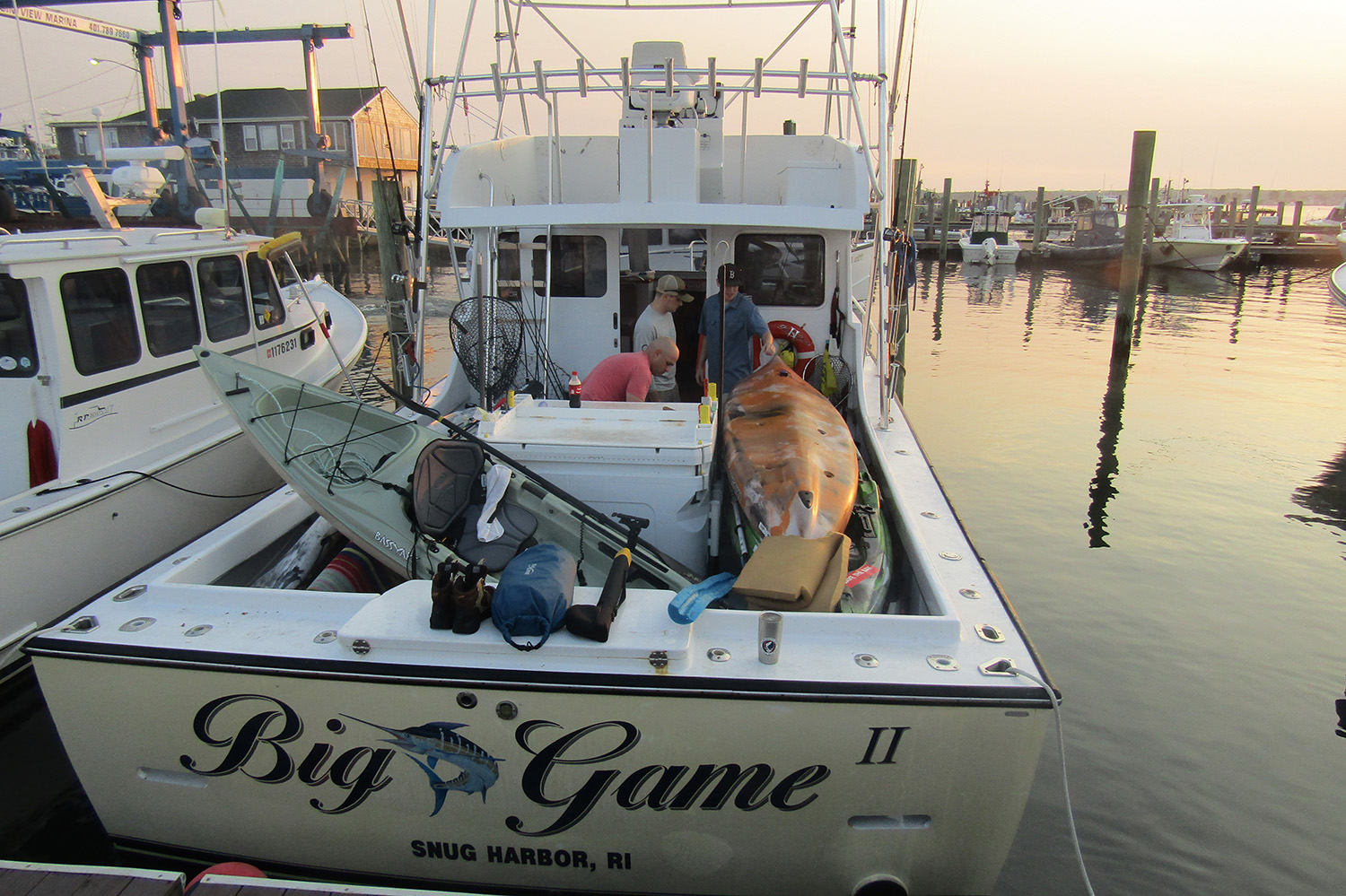 Dock lines were cast at 6:05 from Point View MarinaPoint View Marina. Captain Brian’s plan was obvious: hit the Southeast Light, lose the cargo, put two feet up on the wheel, keep big smudges on the color machine, let the boys reel in some bass. This was a unique adventure, mothershipping they called it, as this was a first for all. Captain Brian makes his living taking people fishing, not necessarily steaming to the grounds then pitching them over the side but the customer’s always right, someone who never worked in retail once said. Sure, load a pile of ‘yaks onto my deck, chew up all my eels and then I’ll tow you halfway to Montauk. Mate Nate Trozzi, unfazed by the whole affair, sent the first ‘yak overboard at 7:20. 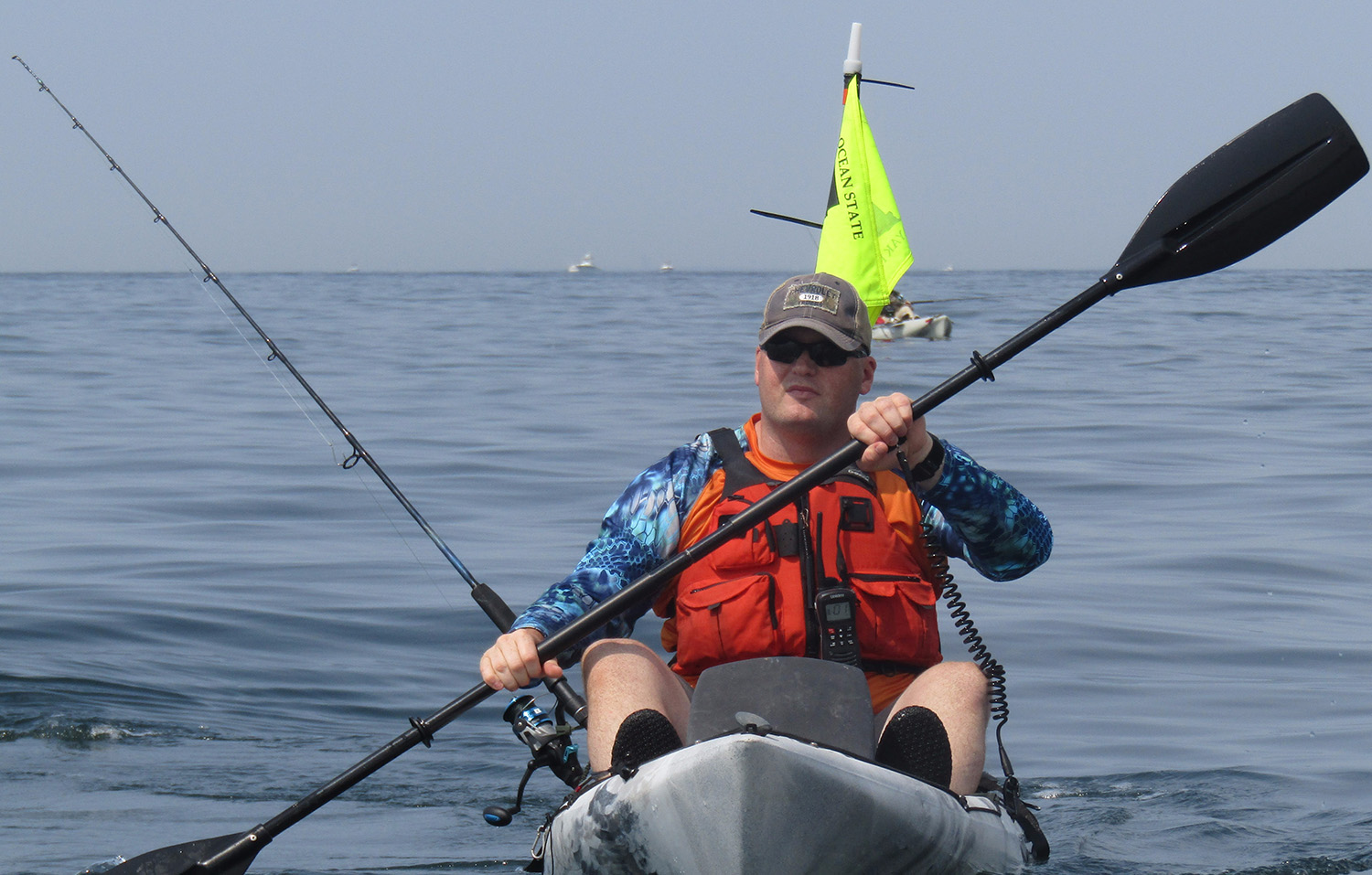 Anytime you plan a trip, a big trip, you take a real gamble that weather and fate will have a some beers a few days prior and decide to mess with things but this day was both an exception and exceptional.

For Jimmy Chappel, Ryan Dubay, Brian Hall, Andrew Craven and Greg Thomas, the ocean obliged, seas were calm, winds fair, waves were welcome diversions. A summer sun shone down on them, pausing only occasionally to oblige some passing high clouds and a circling helicopter whose pilot surely was taken by the sight of six tiny corks bobbing happily a mile south of the island.

With everyone settled, hooks baited and a drift established, they coasted along shadows of tall brown on tan cliffs. Block Island’s south side is a long reach of sand, gravel, winding deer trails and dried out stairs leading up to houses perched, for now, above it all.

In his 1922 dispatch, Tuna Fishing in Spain, Ernest Hemingway wrote of, “Sun-baked brown mountains slumped down to the sea like tired old dinosaurs”. They’re a lot like that.

“It’s been hit or miss with the eels,” Captain Brian warned. They drifted and hoped from the lighthouse west towards first bluffs, second bluffs and The Vail. Andrew Craven broke into a jig pretty quickly while the rest worked eels along the bottom and X-Rap minnows on top for occasional passing schools of frantic bait. A few scup and sea robins came aboard but none of those big bass. Several times Captain Brian reported seeing singles on his color machine but, “nothing stacked up,” so they moved west to Southwest Point and that’s when things got interesting.

To save travel time, kayaks were lashed in a daisy chain, Captain Brian eased the throttle to 3.5 knots and off they went. For thirty minutes everyone bobbed and tugged their way across the tide, fits of breeze and small, uncooperative rollers. One well-prepared angler produced a tall and very cold can of Narragansett beer, glistening with ice chips, strictly for purposes of hydration in a salty ocean environment of course, while the rest used some very salty language to express disapproval of any secreted stocks being completely beyond their reach. 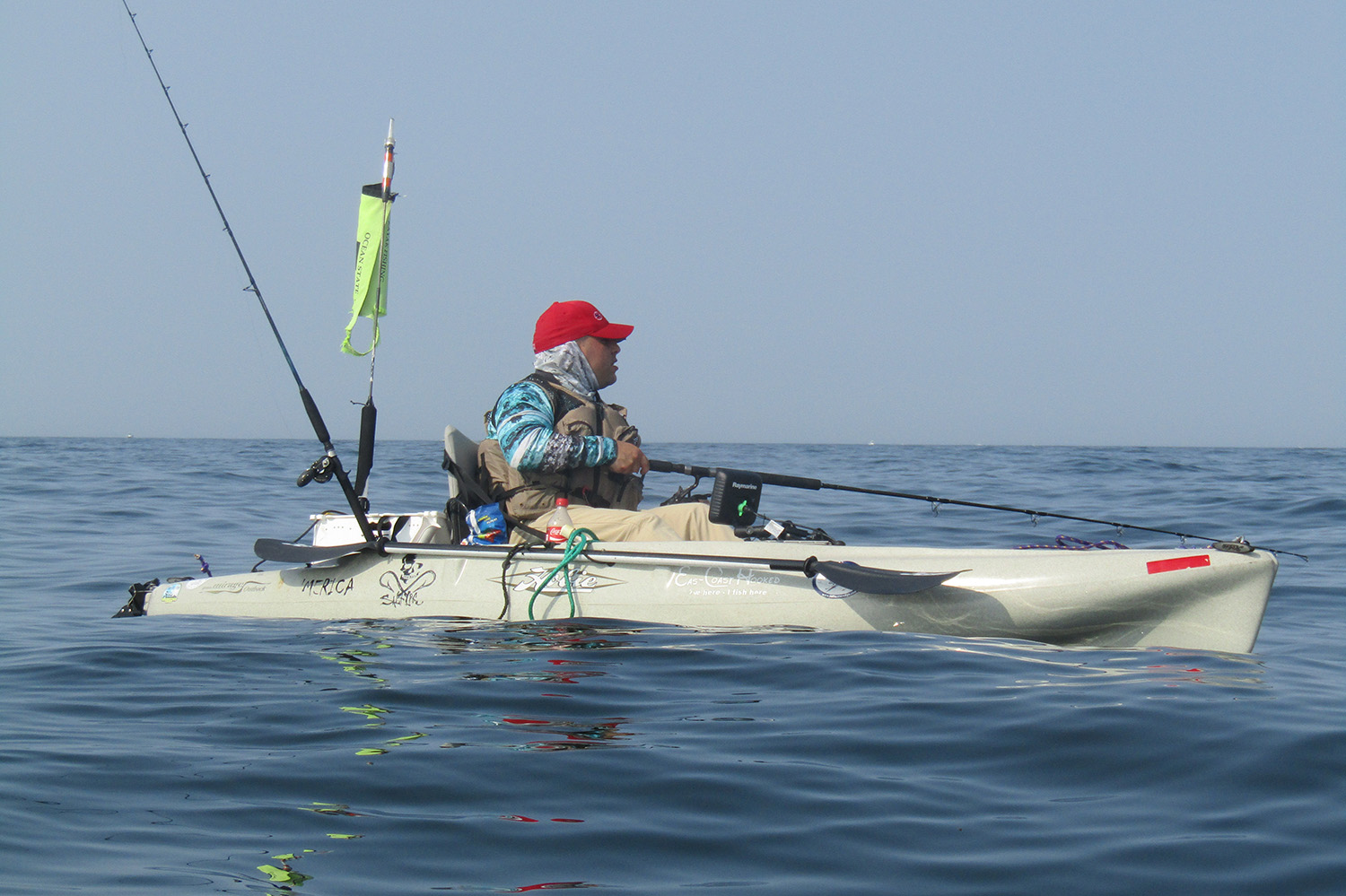 Brian Hall on the chase

The sun was high and steaming west as well. With only a small bluefish digesting an eel twice it’s length and a few sea robins to show, the call was made to head even more west for thirty more minutes of bouncing and slamming and inhaling Big Game exhaust. West to The Ledge. Twice broken carabiners stopped the bumpy parade before Brian Hall had to suspend eating his Chef Boyardee lunch special to re-tie after a forward cleat was torn away.

Southwest Ledge is a different animal than the placid viewscapes below Black Rock or the bony point and corner at The Church. The Ledge moves quickly, currents show no mercy and, truth be told, it’s really no place for a kayak unless it’s on the deck of the Big Game II. Egg weights ahead of ten foot fluorocarbon leaders and the last of those big eels bumped roughly across sharp rock bottom but there were no takers, save for a sold thirty pounder who followed one right to the surface before diving back.

The day was something between hay and grass: no one caught the fifty they hoped for, no camera captured the wide, vertical shot of a real cow before she was released but it was an epic day, a real first-time adventure for all with no regrets and all six were still smiling on the way home, the ultimate sign of a very successful adventure.

You can take a quick look at their adventure here…

Inspired by my endless enjoyment of e.b. White's “Memorandum,” from a favorite book and gift of my young son, 1941's One Man’s Meat, I offer a fishing man’s memorandum for Spring. Today would be a good day to organize my boxes of lures. Most are stored in opaque...
Keep Reading

“He can fish from sun up to sun down”, Paul Lavoie said of son, Andrew. He started fishing competitively at four. He’s the Rhode Island Bass Nation Angler of the Year, for the third year in a row. He finished fifth in the country at Tennessee’s Bassmaster Nationals...
Keep Reading

Reconnecting with waters flowing through so much South County history

Kassi Archambault held up a clipboard, the international symbol of getting chatty people to pay attention, and called fifteen eager people in life jackets and orange floppy vest to assemble by a river. Gracious as always, her first words were, “Thank you.” Kassi...
Keep Reading