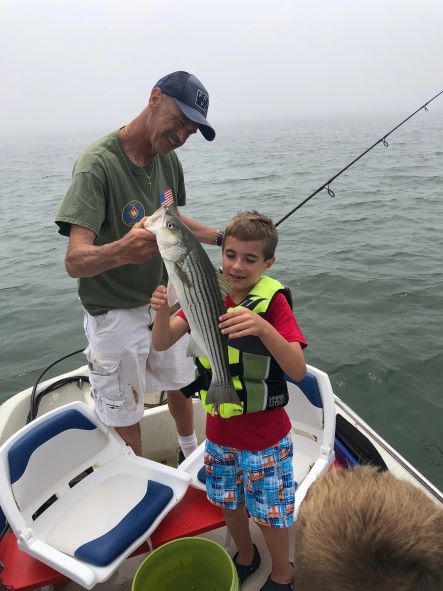 August has never been so bright, never so bright as when two young and happy fishermen hauled in a really big fish and then, after a few days of rest and homemade lunches, went back and caught another one. Five year old Gabriel Simpson and his seven year old brother Michael are stars in the making, possibly as fishermen, possibly as adventurers, possibly as comedians and these two know how to catch fish. Indeed, the brightest faces catch the biggest fish.

Krista Simpson and her sons are blessed to spend summers with her father, Bob Kolb, cruising around the salt ponds and coastlines looking for fluke, bluefish and striped bass. He fills their days with trips to Jim’s Dock, to the always smiling Elisa at Snug Harbor Marina for a day’s worth of bait and trolling along in Bob’s 13’ Whaler, “Speedy McSkiff.” Together they fish two to three days a week, typically on Big Boat Mondays and often on Big Beach Wednesdays. Their trip last week was extra special.

“Let’s drop a line down and see what we catch,” said Michael, known to shipmates as Captain Barnacles, as they approached a secret spot searching for stripers. Apparently brother Gabriel was in charge of their five eels but in short order, between chasing them around the deck and possibly being distracted by so many potential adventures in a salt pond, only one eel remained. It was 1 p.m., clouds and a moon tide were arriving. 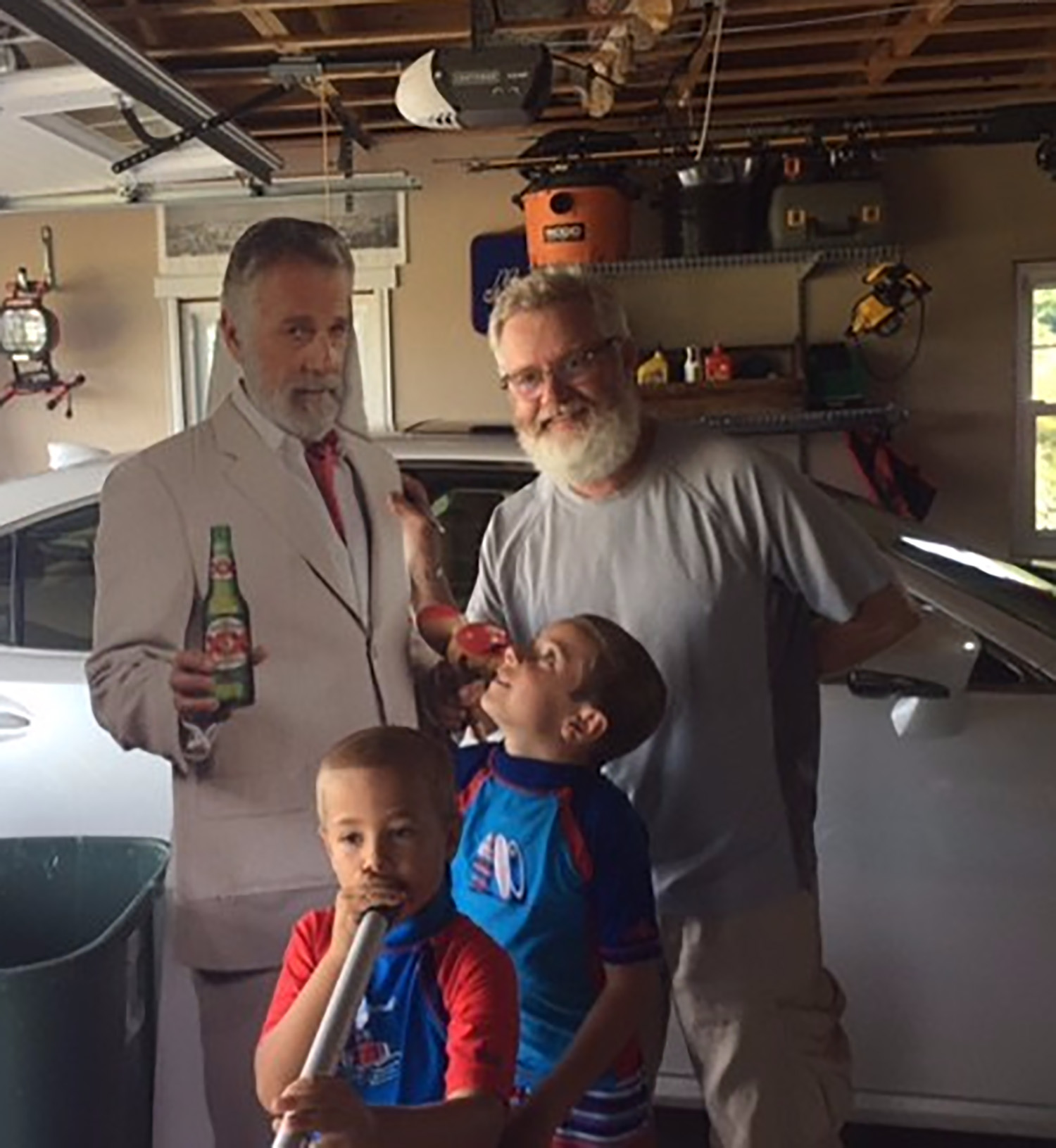 While drawing a very, very general map in the air with a piece of plastic, it was obvious Michael understood the ramifications of identifying a good fishing spot to a guy with a notebook. “We were in Point Judith Pond, somewhere around High Point,” Captain Barnacles said evasively, avoiding my eyes. The boys had talked about heading for home but, “the water goes around and around and sort of makes a small island,” he said and they knew that every few days, a big fish might visit. With their grandfather, alias the swashbuckling Kwazii, watching the helm, somehow the eel managed to free itself from the hook but stay entangled with the leader. They reached deep into their fishing toolbox for some luck, which in this case was Michael’s favorite fish poem, printed here with his permission.

Abracadabra, Make a fish appear, One on a line, And one on Kwazii’s beard.

“He struck!” Michael yelled and it was fish on. He wrestled the rod, worked through the fight and helped haul the bass aboard. “It was a good struggle,” Michael told me, “although I don’t really know how long a good struggle is.” Fair enough. Tipping the scales at 28 pounds, she measured 36”, which is a lot for many fishermen, but not for these two. 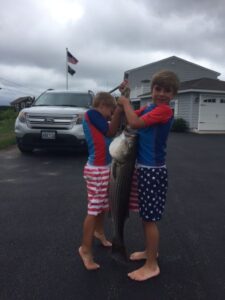 Bob showed them how to fillet, removed an intact green crab from its stomach for an impromptu biology lesson, then proceeded with the preparation of a house specialty, striper bites. “So I’m the brains and he’s the brawn,” Michael said, pointing to Gabriel, who was busy loading an inverted umbrella with egg weights in some new, cutting edge umbrella rig design. The boys are wonderful, full of good energy, have the biggest smiles ever and love to fish, especially if there’s a ride to the boat in Kwazii’s fully rigged golf cart.

The Simpson’s are a Gold Star family. 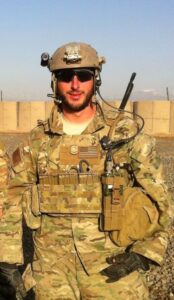 Their father, Army SSG Michael H. Simpson of C Company, 4th BN, 1st Special Forces Group (Airborne), gave his very young life to protect all of ours. SSG Simpson was a Green Beret, a brother in a select group of quiet professional soldiers but their Dad also was a proud soldier happy to announce his hard earned membership on an honorable team. Krista has formed The Unquiet Professionals to support those who grieve from such losses. “It’s healthy and empowers opportunities to heal,” Krista told me, adding, “Mike always had somewhere to be, he was always training.” Talking with his young sons, it was obvious their father’s sense of adventure and joy is now that bright twinkle in their eyes.

A few days later, on Big Beach Wednesday, they headed to a corner of Nebraska Shoal with white buck tails and squid for fluking. It was 10:00 a.m.

“We saw a line of bait, it was about this long in the water” Michael said, gesturing down to his tan bare feet. “We saw it with our very own eyes!” Gabriel exclaimed, swinging the umbrella rig prototype around the garage. Thinking there might be bluefish below, they cast lines off both sides and one took off. Gabriel yelled, “Pappa, fish!” as it went under the boat. After lots of reeling, repositioning and maneuvering, the two managed to land a beautiful seven pound bonito. The Simpson brothers had struck again.

While captains and guides swept the south coast, Captain Barnacles and the Speedy McSkiff crew showed us all how to catch big fish, how to cover your tracks and how to laugh all the way back to Jim’s Dock, coincidentally just in time for lunch.  The Simpson family is so strong. Gabriel and Michael are so fortunate; they are two angels happy as clams, cruising a salt pond with their ever-patient Kwazii, all smiling brightly.

With her boys at her feet, Krista said, “We are going to show people there’s always hope, you just have to look for it. You just have to be open to it.” 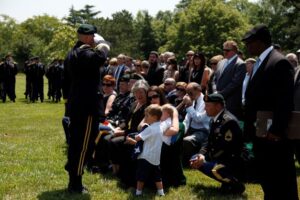 * For a guy who makes a living with words, the Simpson family left me speechless. Meeting that family was monumental for me. The two young fishermen, well they kept me laughing all the way home. Their sacrifice could never be properly translated here and I am humbled by their unity, strength and contagious bright smiles which brought me balance as I attempted to understand the loss of a great soldier, husband and father.