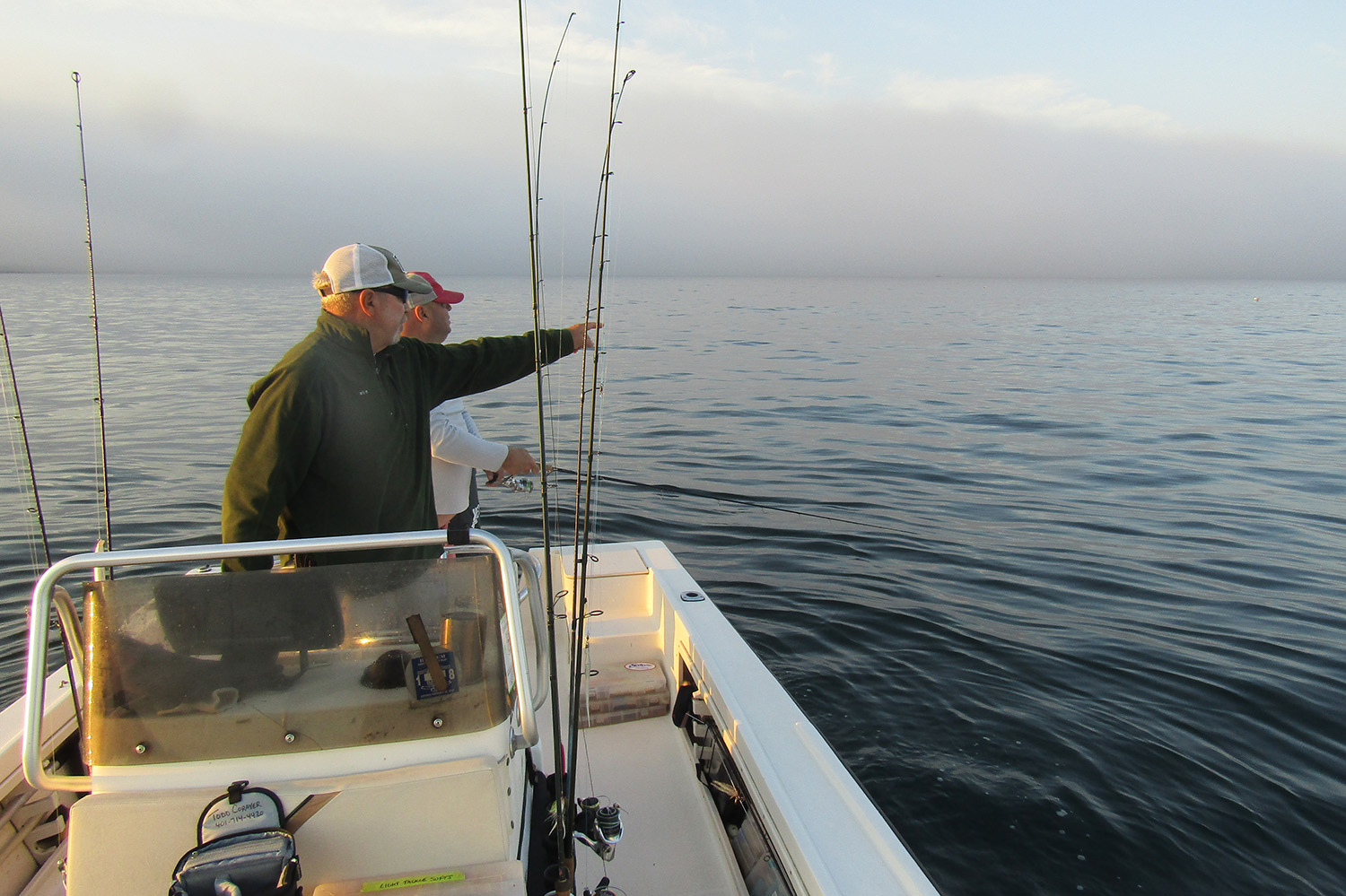 When you’re fishing the same reefs the day after bait tye-dyed your color machine and stripers were all but inviting themselves aboard and now you can’t find a single one, you start reaching for answers. Not excuses, explanations. One day does make a difference; everything we think we know about fish can be washed away in just one day when bait moves and fish swim.

On a perfect August morning dripping with a mornings dew, Captain Rene Letourneau of On The Rocks Charters and the always entertaining David Henault ran the captain’s Mako 21 south from Newport Harbor looking for stripers and maybe some first of the season bonito. 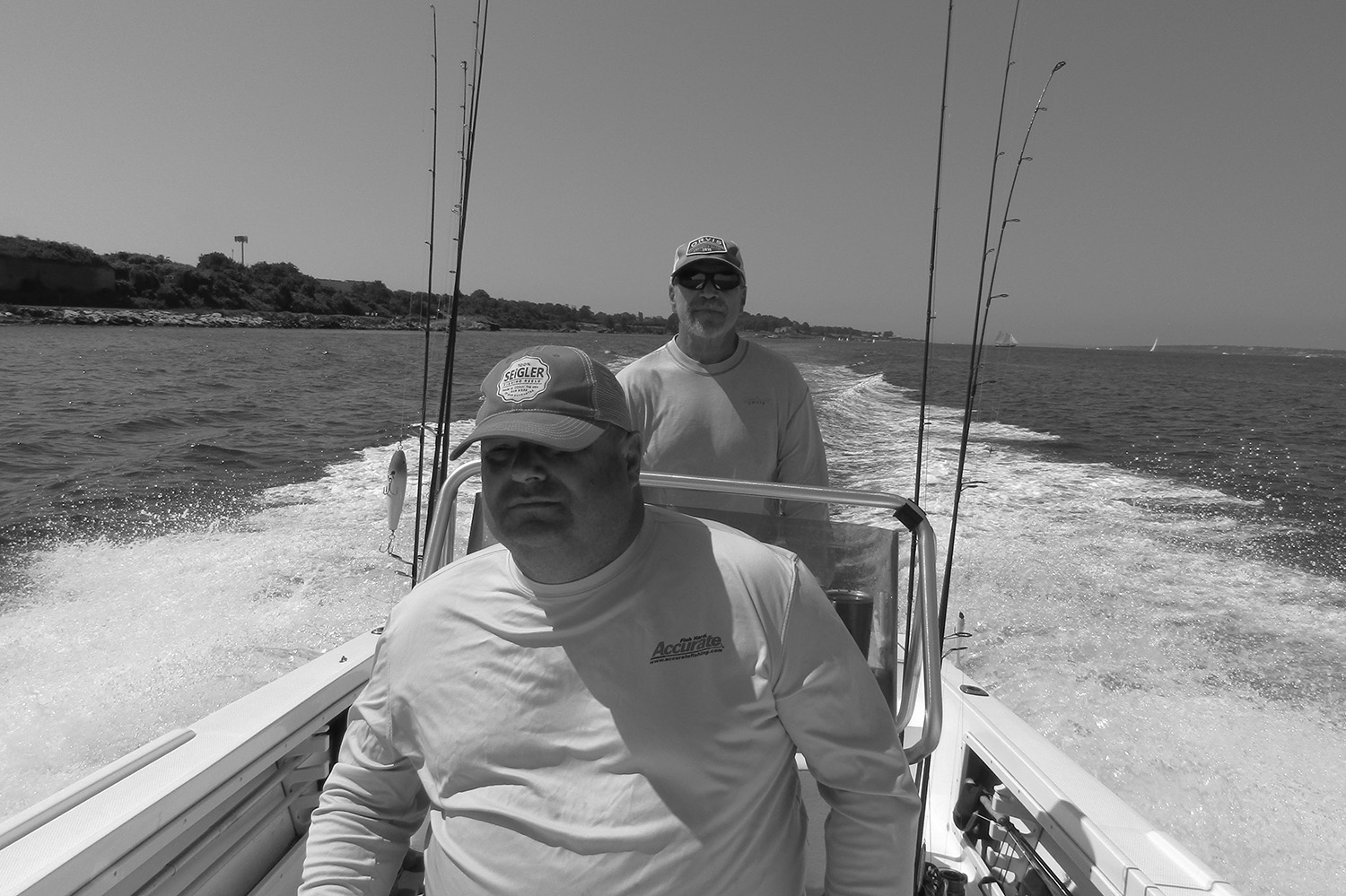 Capt. Rene and Dave Henault racing for the reefs

Things had changed quickly, the way things often do. On the edge of a whispering south wind, a dungeon thick of fog rolled in fast and heavy, reducing visibility to 100 yards at best. Rookies around the reef blasted away on air horns while the captain held tight, casting silver RonZ’s, watching and getting a bit irritated. The differences were striking, on board and overboard.

“I focus on the things I can control,” Rene offered. This likely was a much deliberated decision, a rational conclusion on forces beyond his reach which might make one go mad attempting to correct or even predict. Captain Letourneau is precise, practiced, experienced and focused. For 15 years his clients have returned because he knows his business so he catches fish, lots of fish and when things are out of balance, he isn’t happy but always professional. Balance is what good fishermen are all about. A half-dozen 16” stripers after three hours is not really ok in his playbook, considering how different it was the day prior. So he moved west.

“To your left,” Rene said, motioning to Dave with his hand. Dave Henault owns Ocean State Tackle, so after a lifetime of being in charge, he didn’t necessarily react all that quickly to Rene’s commands. He sees them more as suggestions which might ultimately lead to tight lines. Dave tells lots of stories, pausing rarely, inquiring occasionally to see if he’s right, laughing all the time and casting through all of it.

Dave Henault searching for the sound

He’s a force of potential energy. Dave will out-cast you all day long and likely catch more fish than you but may require a moment or two longer to wind up than Rene might like. “Your left! Your left! Cast to your left,” Rene said, not relying on his color machine to know there were a few fish swimming around in a dramatic absence of bait. One day prior he was swarmed by mackerel schools and some very small fishes, anchovies perhaps and the bass were devouring them. This day, in such a desert, he would not be denied an opportunity to have someone on his boat seize an opportunity.

“Pick ‘em up!” Rene exclaimed. They had landed a few bass here and there but clearly things were different and not for the better, save for a receding fog line dragging back a sweet, complete rainbow and a long view of where birds were supposed to be circling. 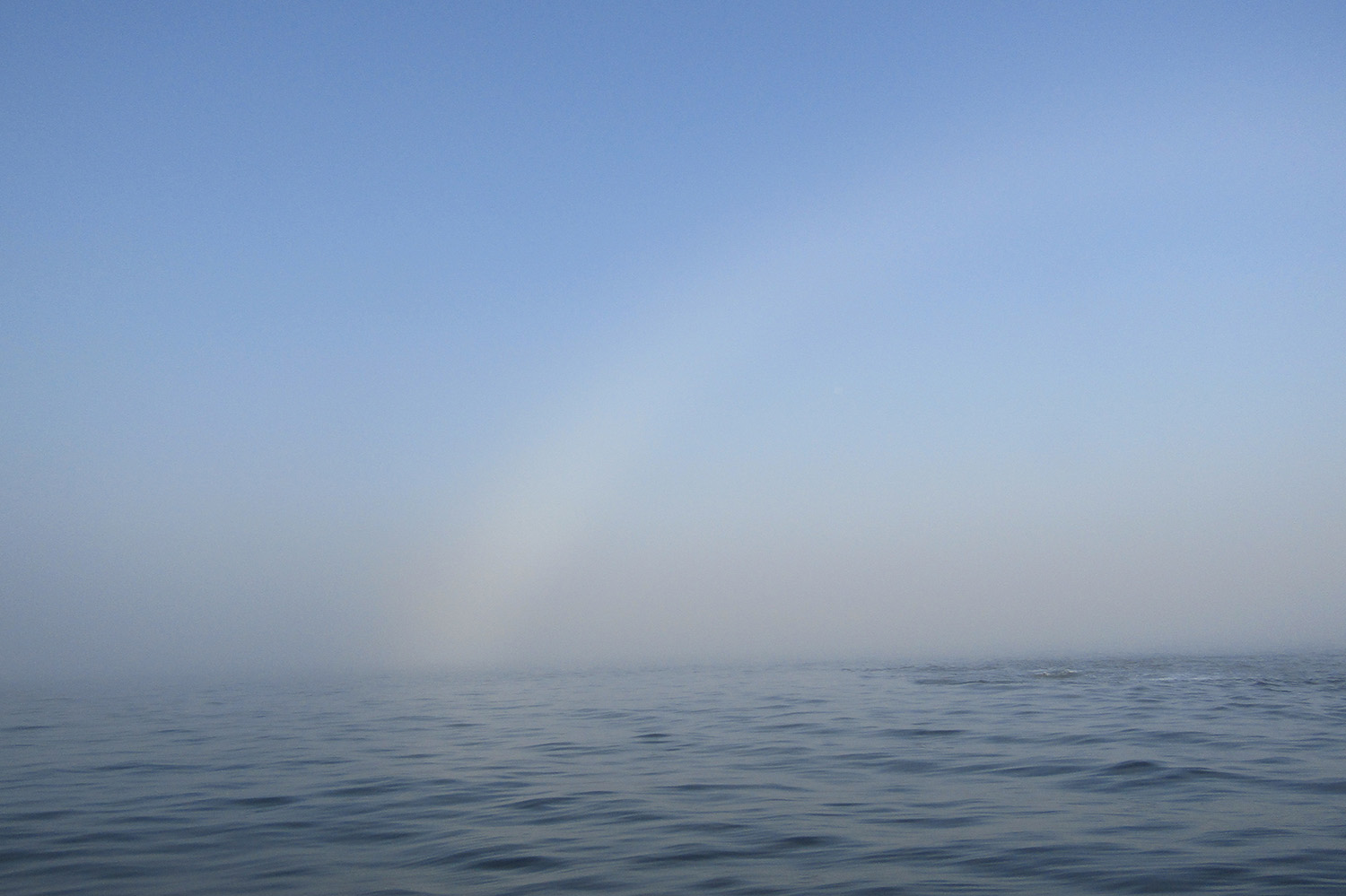 Dave is at ease, checking his cracked cell phone, Rene is calculating, checking his horizon. Dave makes a good living telling customers what they need, which rod has the best eyes, why you should use the braid he likes and how to know which reel is the right fit. In some ways, so does Rene. When you step aboard his mint Mako, after you’ve wiped your feet of course, he’s ready to get you on fish because that’s what you need. Fish.

“We’re moving,” Rene announced. After working Jamestown’s Hull Cove and Lion Head under a clear sky and over oxygen rich white water, nobody was home, save for a few folks perched on the stubby cliffs, long casting into the same wash. 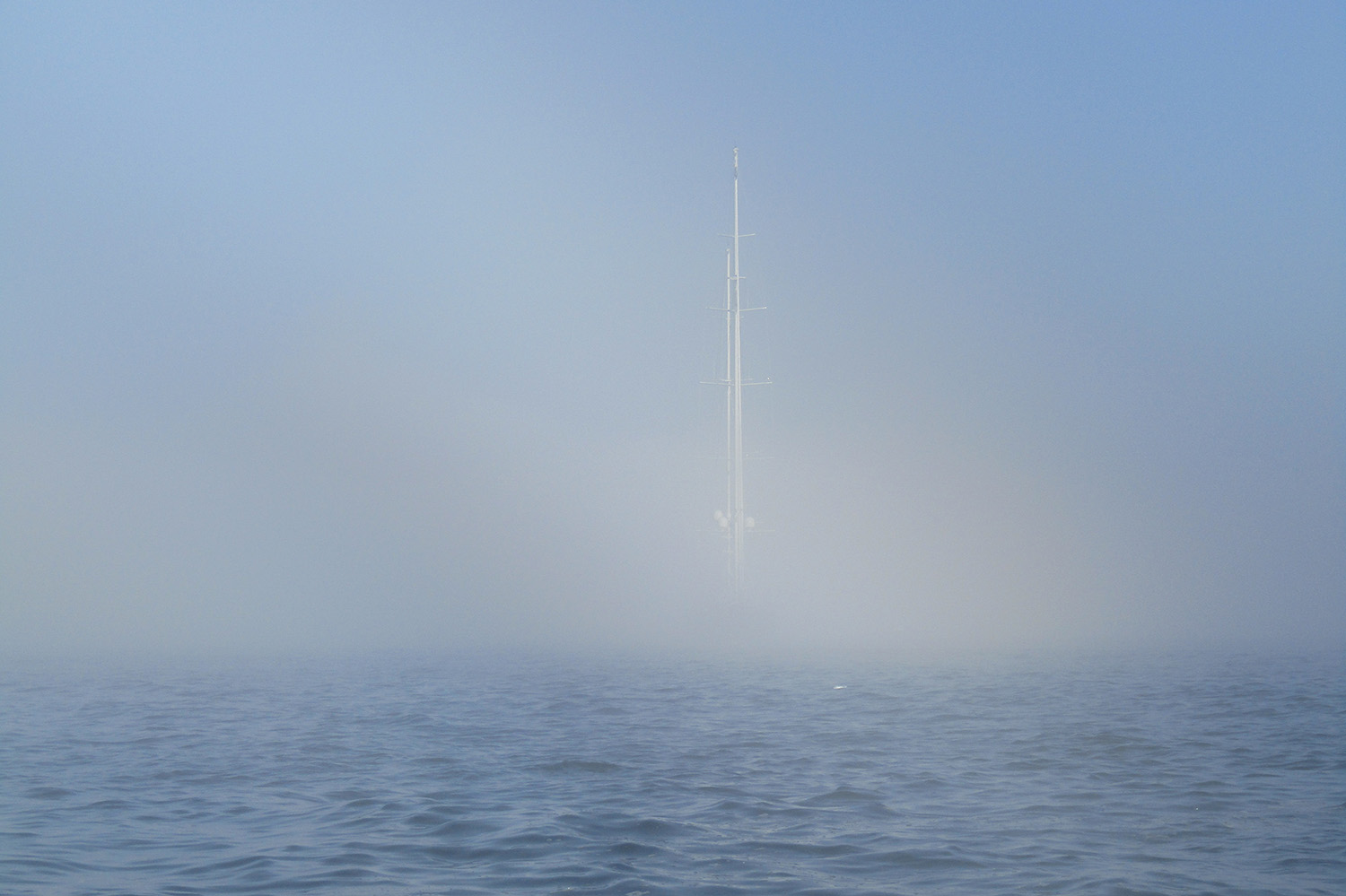 Tucked tight in a cove, a long, sleek blue sailboat held fast at anchor, a ghost on the canvas with only the highest lines of her ivory mast surpassing the weight of a fleeting summers blanket.

Spinning rods tucked to starboard, Dave centered and seated up forward, throttle advanced and East on the compass, they raced for Brenton Reef. 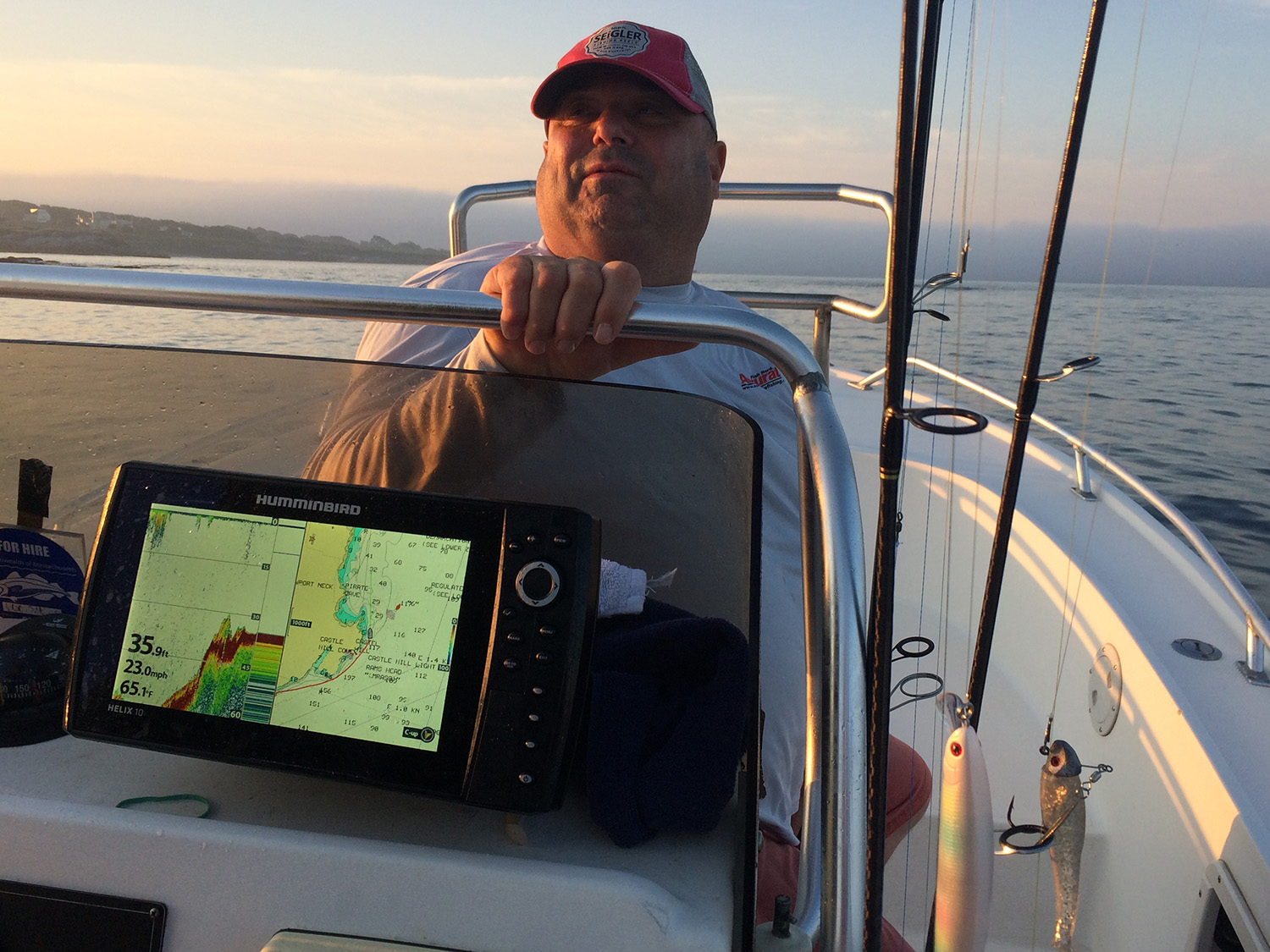 Dave Henault questions an empty screen and no coffee

“Don’t wait!” Rene advised as they cast and cruised around Price Neck and Lands End, searching for the sound because they were stacked up the day before. There were a few fish around, some seas bass and nibbling tautog but no keepers. The water stayed flat. Rene made the call for Elbow Ledge where the bottom comes up fast, from 56 to 11 feet, where they cast blue over white spooks and XP Minnows, where the water was clear and the tide had regained some steam but where there were no fish.

By ten of eleven, twelve small clean and beautiful stripers had been released and a handful of pearl RonZ’s laid to waste. 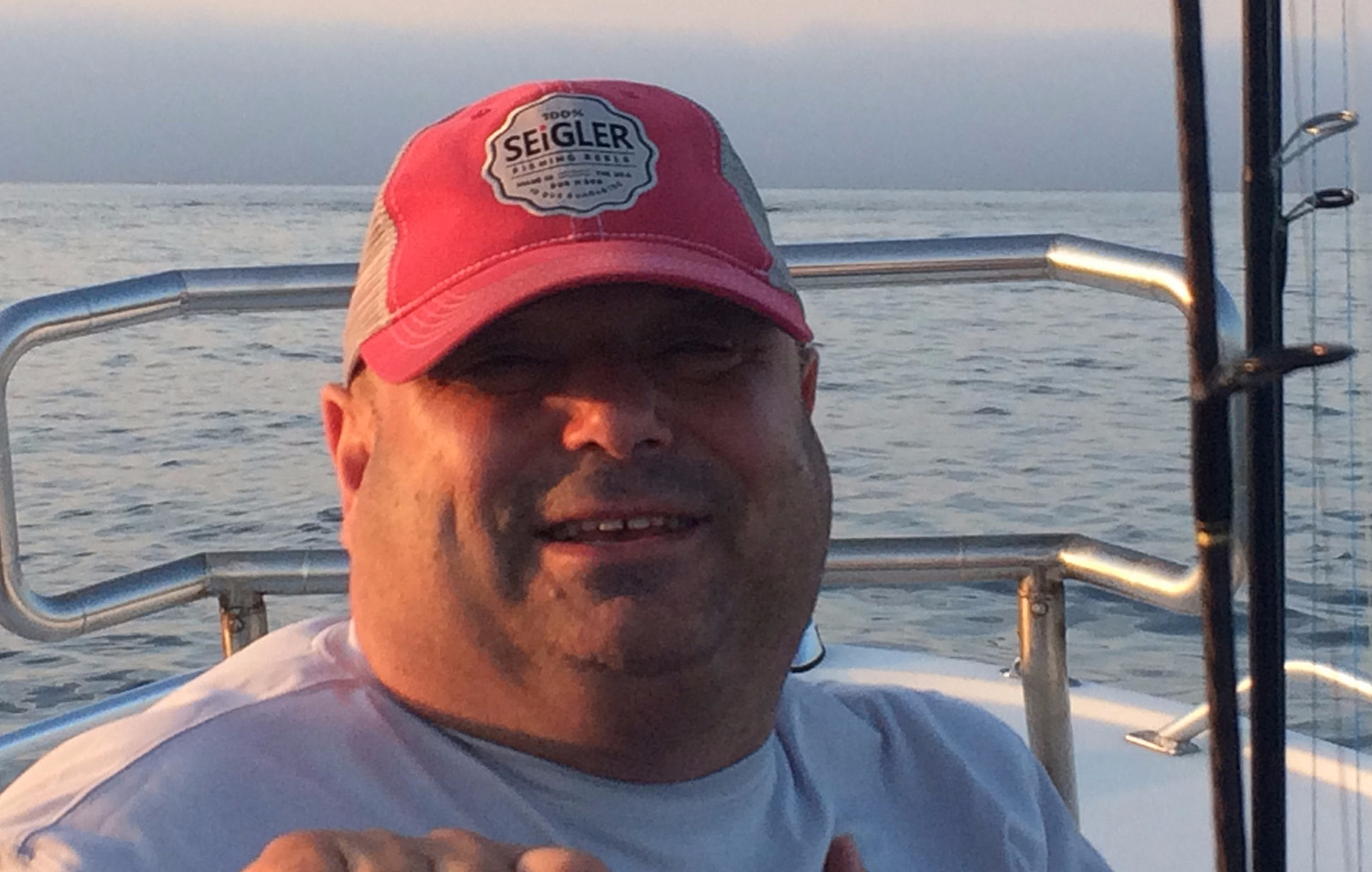 No bonito? No problem.

Captain Letourneau felt there wasn’t much else he could have done to save the trip but really, nothing was lost. Through the fog of that perfect August morning, fish were caught, endless stories were told and everyone was reminded that sometimes people are different, that fish swim and that Nature will never allow herself to be predicted.