The first schools of albies were seen feeding south of Block Island, now they’re moving inland from the mouth of Narragansett Bay to Watch Hill, bringing a level of excitement equal to Spring’s first stripers.

Captain Rene Letourneau of On The Rocks Charters has been finding them on the fly around Newport, surf casters have been hauling them in along the south coast and die-hard fisherman Lawrence Thompson keeps giving everyone the slip to catch a mess for himself from a boat and rocks. Dave Henault of Ocean State Tackle recommends metals like the Daddy Mac or Kastmaster XL’s, swapping out split rings and hooks on Deadly Dicks for better catch rates and soft plastics like Joe Bags Patriot Fish and Al Gag’s Whip It Eels. “My favorite lures for these fish are Hogy Epoxy Jigs. They offer durability, long casting distances and some buoyancy. They skim along the surface and break water occasionally,” he said. Early morning seems to be best right now and they remain fickle for favored colors so bring a bunch.

Ron Rego won first place in the surf division at the Billy Carr Midnight Madness Striper Shootout. Fishing from the beach was tough but he managed a 27.9 pound bass while Rich Reich took second place with a 26.02 bass. Oddly, those were the only two surf fish from 20 registered fishermen. Kyle Dawson earned first place in the boat division of 52 fishermen with a sweet 49.88 pound bass while Billy Carr’s nephew won the junior division. With a party at the Bon Vue afterwards, $4000 was raised for the Pt. Judith Fisherman’s Foundation Scholarship Fund.

Well done all around. 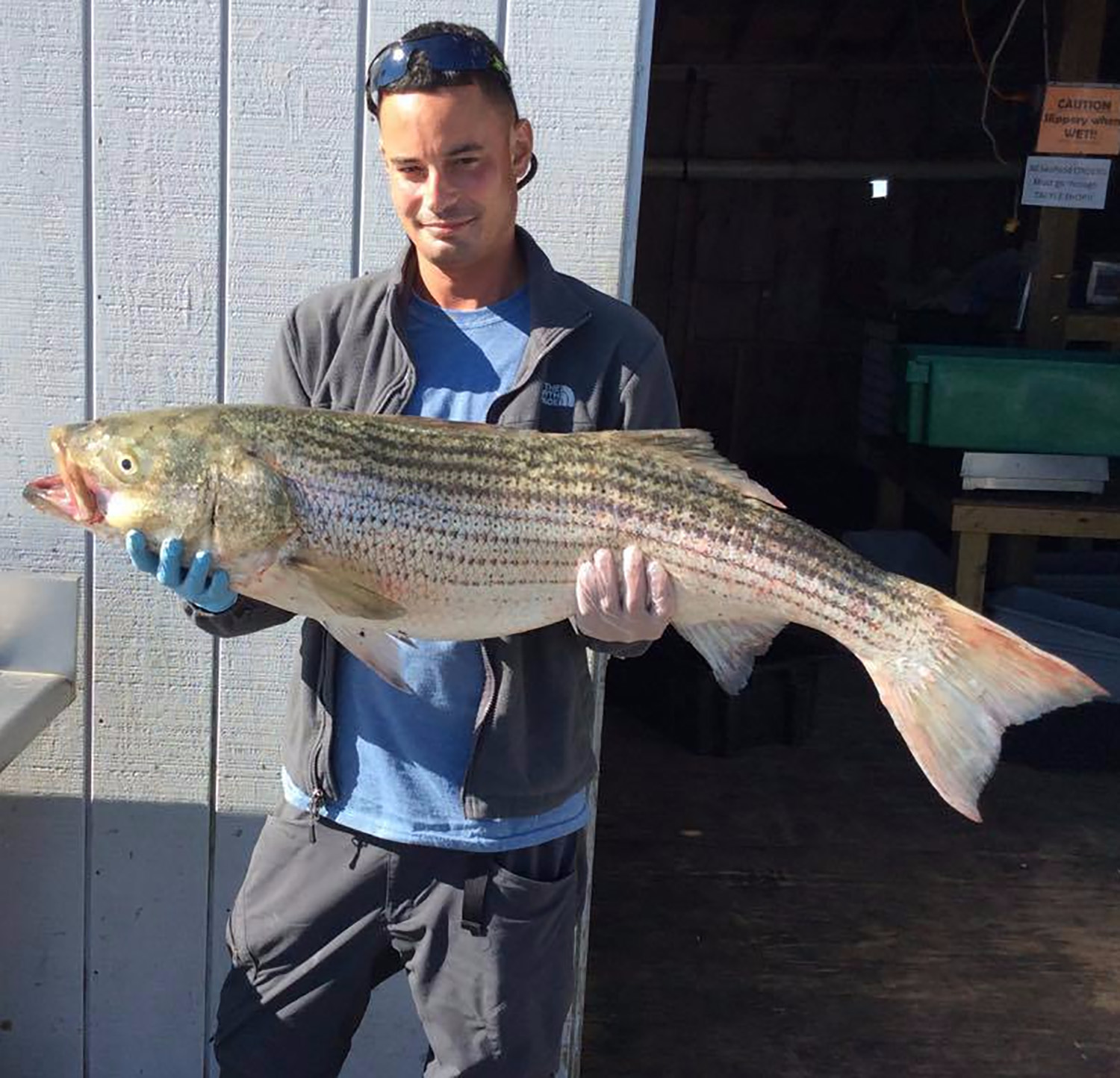 Ron Rego with his winning striper

On Thursday, October 19, the Museum of Primitive Art & Culture in Peace Dale will welcome Kevin Klyberg, a National Park Service Ranger at the Blackstone River Valley National Historical Park. He’ll talk about how and why the Blackstone Canal was built from Worcester to Providence to facilitate movement of raw materials and finished textiles. Completed in 1828, the 45 mile waterway succumbed the more modern railways system but Kevin will detail how it’s creation, construction and current state has affected the landscape. The talk is free for members and a donation by non-members is very welcomed. The museum is located on the second floor of the Peace Dale Office Building, 1058 Kingstown Road in South Kingstown.

Be sure to check out the Eskimo kayak while you’re there.

Over the years, this column has offered far too many obituaries, leaving words for  fishermen lost to water, age and unknowns. Characters all, they filled a place in our hearts with stories, laughs and tears. This week, we mourn another loss. Benny’s, the iconic go-to family store for licenses and light bulbs, totes and towels, games for the yard, patio, kids and grownups who still walk the toy aisle to get to cleaning supplies, gas grills and sponges for a dollar, is closing for good. What kid didn’t pace the bicycles dreaming of pink handlebar tassels or slick chrome wheels for hot rodding side roads and hot summer driveways?

Too often minimized by late summer plastic piles of Halloween creepiness, then October’s imitation Christmas window snow, the fishing aisle was the place for surf plugs, reels, rods, mono or braid, nets, waders, weedless hooks and bilge pumps secured behind Plexiglas doors with keys dangling from the lock. Who can forget lower pegs heavy with vacuum packed minnows and lances, their poor eyes bulging from the pressures of plastic? The surest sign of Spring, Al’s Goldfish trout lures hung from pegs above floors slippery from snow boots.

The closing was a surprise for Al’s so until another retailer tries to fill Benny’s big galoshes, you can find their lures for sweet water and salt at their website, www.alsgoldfish.com.

I’ll miss the sting of Pall Mall waves wafting out from behind  bags of compost and topsoil and  walking the foyer lined with green plastic turtle sandboxes, t-shirts fading on blue plastic hangers and big dusty bags of charcoal. I’ll miss all those fun beach toys, end cap temptations of Snickers bigger than any one person should even consider, shelves of Patriots car accessories and tires permanently on sale. Most of all, I’ll miss knowing that once through the doors, the fishing aisle was dead ahead.