You can cast for twenty minutes, slam the rod against the gunwales, curse a blue streak or swear you hate fishing. You can pack so many jigs and snax into a plastic box that the lid cracks and cracks again before you finally give up trying to push it shut. It’s a hit like dynamite.

You can rig ten rods with every color jig, strength of braid, twist of knot or offerings to Loa but if albies aren’t interested, you best make sure you’re comfortable. 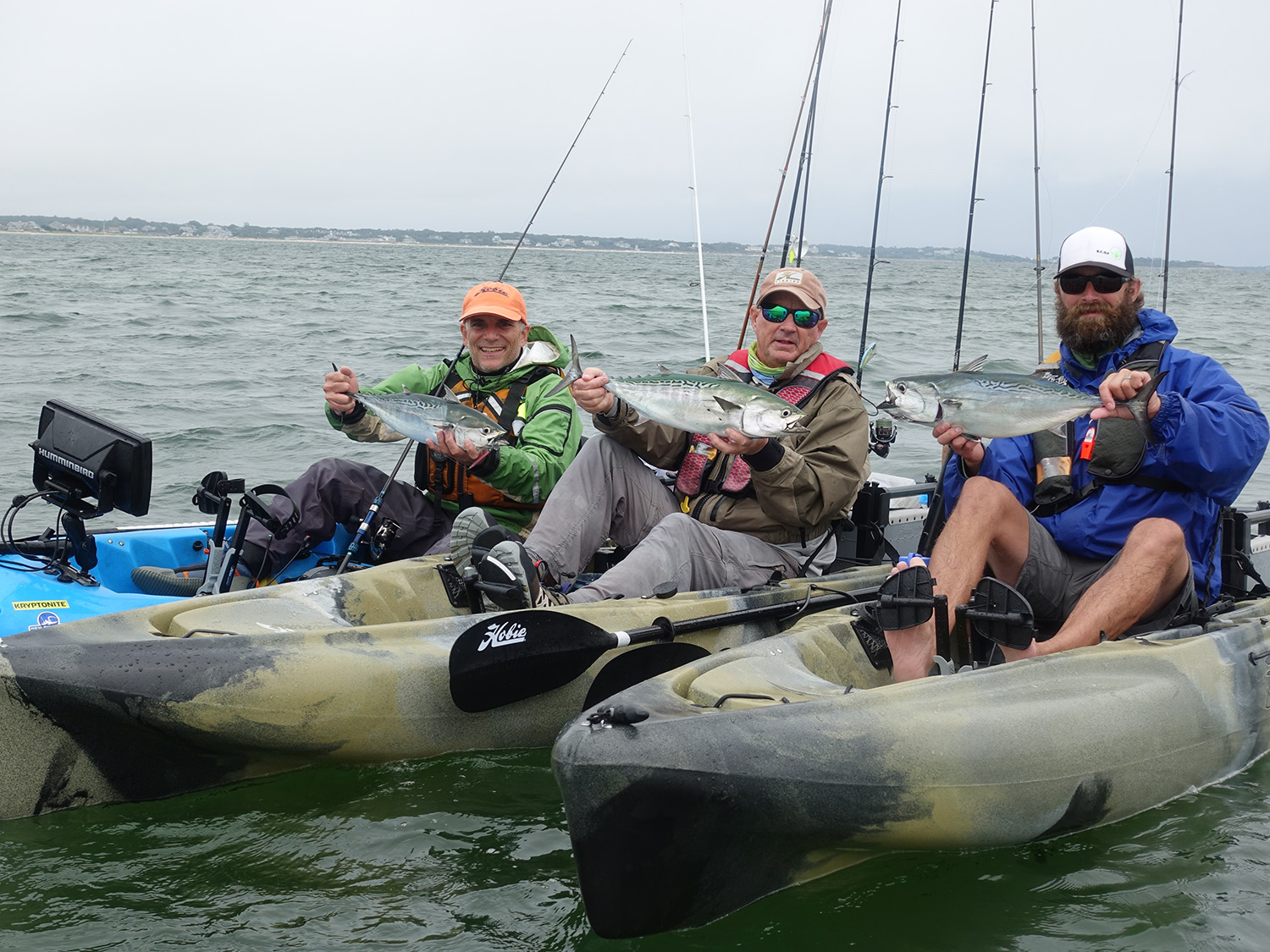 False albacore are predators fast as summer lightning. Their strike will stop your heart then spool the moment you reach for a camera or paddle. They’ll disappear under your boat just when you knew you had them. Worse, they’ll school up by the dozens, hundreds even, allowing you to catch and release barely a few, if you’re lucky. All that’s precisely why we love to chase them. 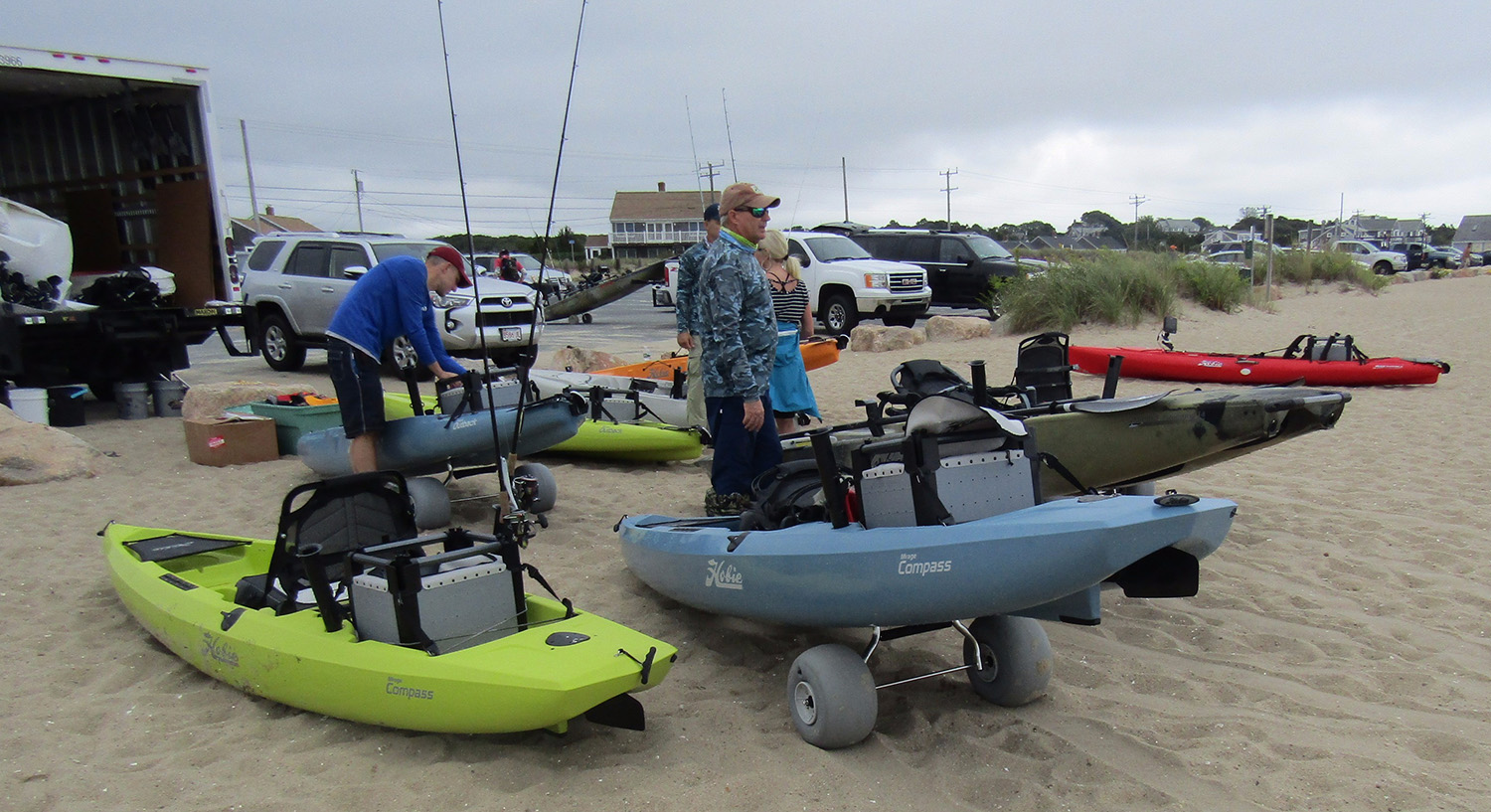 Getting the boats ready for a big day at Craigville Beach, Massachusetts

The Barnstable parking lot was already busy in early morning darkness as anglers stretched for rooftop kayaks, stowed rods and mumbled about a line of long neglected Port-A-Johns.

Everything was grey, except the bright yellows and muted blues of new boats and big, soft beach wheels for spiriting them to the shoreline. Craigville curves and gapes to receive the Atlantic, the bottom splits into equal portions of sand and security for bait and bottom dwellers. Fishermen know this as a reliable striped bass haunt but this day, bass stayed clear. Despite all that offshore energy, waters were smooth through the morning and thankfully full of fish. Scup came to bucktail jigs bounced even without strips of anything, black sea bass chased whatever they pleased and for the wise who packed Rapalas, king mackerel entertained everyone as they jumped and flew up four feet.

“I’ve lived here all my life and this is the first time I’ve ever seen them,” said one local. There was talk of kings making a surprise arrival around every five or ten years, likely hitching then ditching the gulf stream as they’re more commonly found south of the Hatteras in that 68 to 75 degree Fahrenheit range. Hobie Top Gun Eric Harrison was all over the place, offering guidance, passing out lures, speeding close and far from shore, catching anything with fins from his sleek sixteen footer. 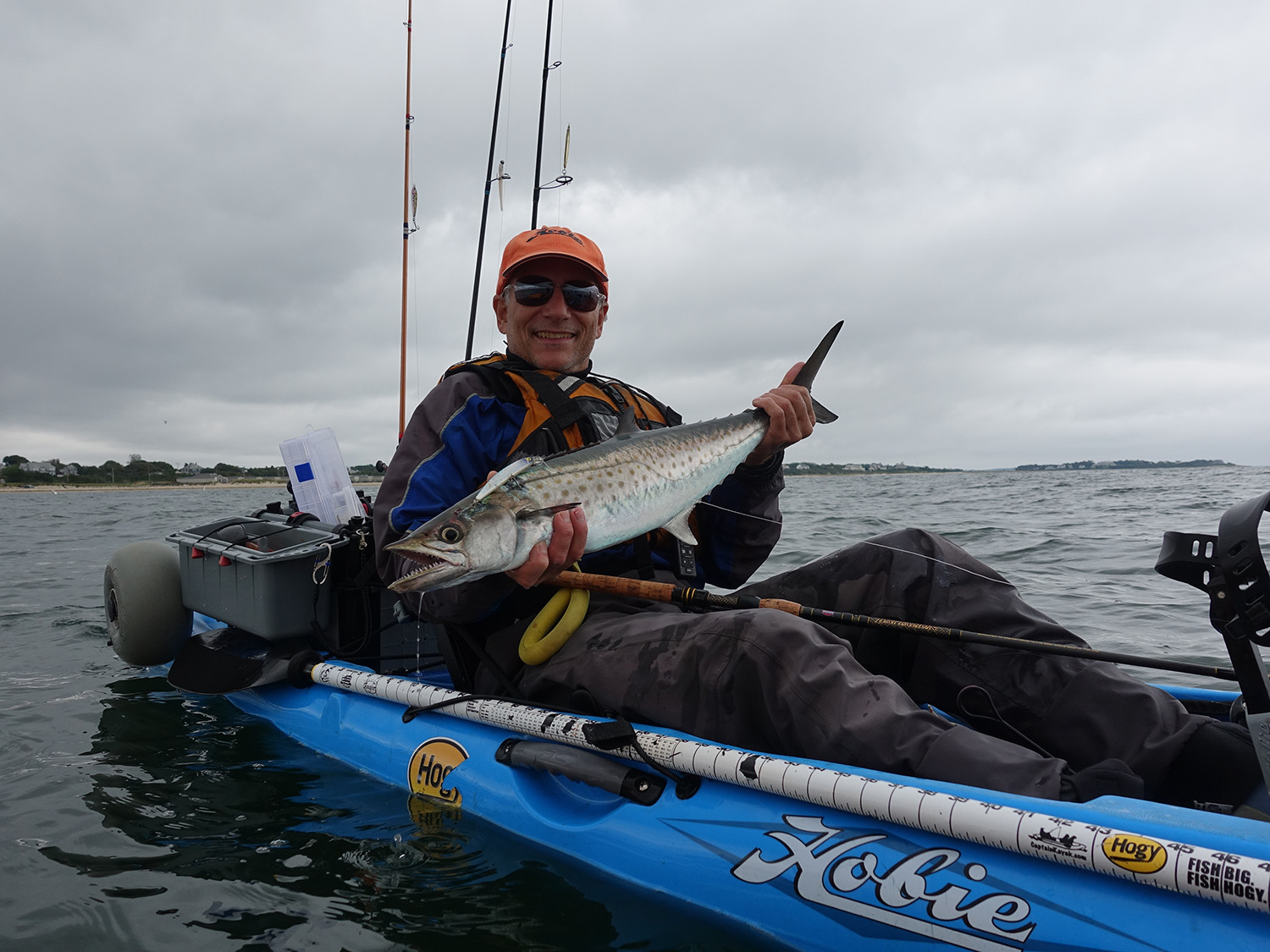 Shawn Barham, sitting high in the saddle of his Pro Angler, seemed to have the right stuff as he landed kings, sea bass and two of those elusive false albacore. 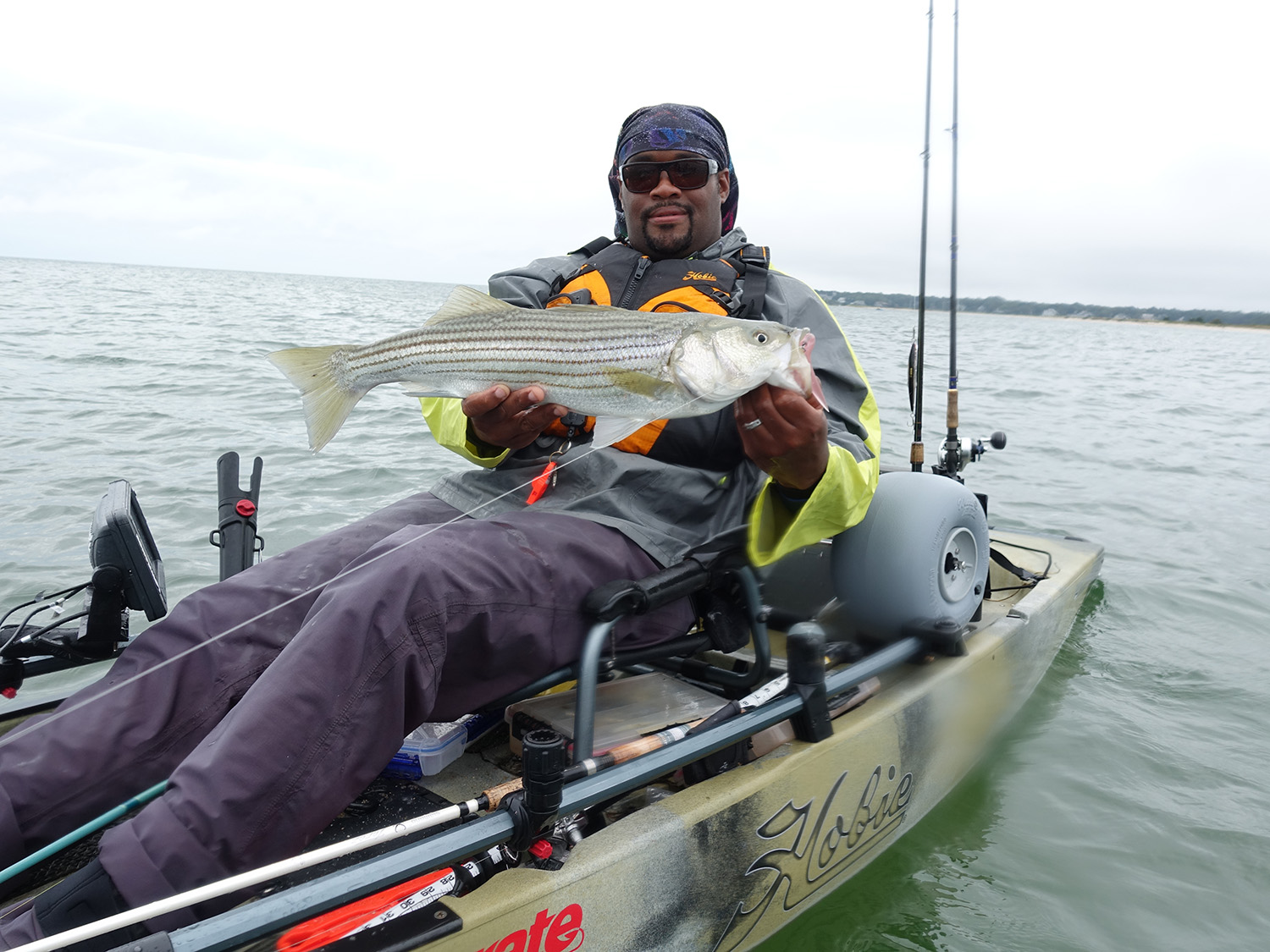 He’s a big guy with a big smile in a big boat, surrounded by a tackle store worth of lures, rods and snacks. He’s a Top Gun as well and if you followed him for a while, you’d quickly see why.

Albies burst onto the surface in all directions, fast as lightning, disappearing just as magically. They torpedoed through bait balls and right past my rainbow of Epoxy Jigs. California’s Kevin Nakada said, “There are fish all over the flats,” in a nod to just how packed this beach gets when conditions are right. Throwing an Epoxy Jig towards a fractured brown bait ball, everything stopped fast when my line ran down to the arbor knot. I had never respooled the PowerPro Super 8 Slick after cutting away so many lengths from fouled tips and exploding wind knots on an earlier adventure. That line is a disaster. A lure of last resort was a three inch wrinkled blue over silver spoon found in a parking lot several seasons back. With three rods on board, an albie predictably hit the one short on line.

The beauty of a Mirage pedal drive is that when a big fish tears to the opposite direction, you just reach for a rudder control and start pedalling. I noticed that I didn’t notice when I was pedalling and in just a few seconds, the Compass was following the ablie while the reel made up precious braid. It’s a remarkable tool to have in your tackle box; there was some muscle memory when your brain tells you to reach for a paddle but that fades quickly.

The fight was a solid five minutes while it dragged me around the bay. 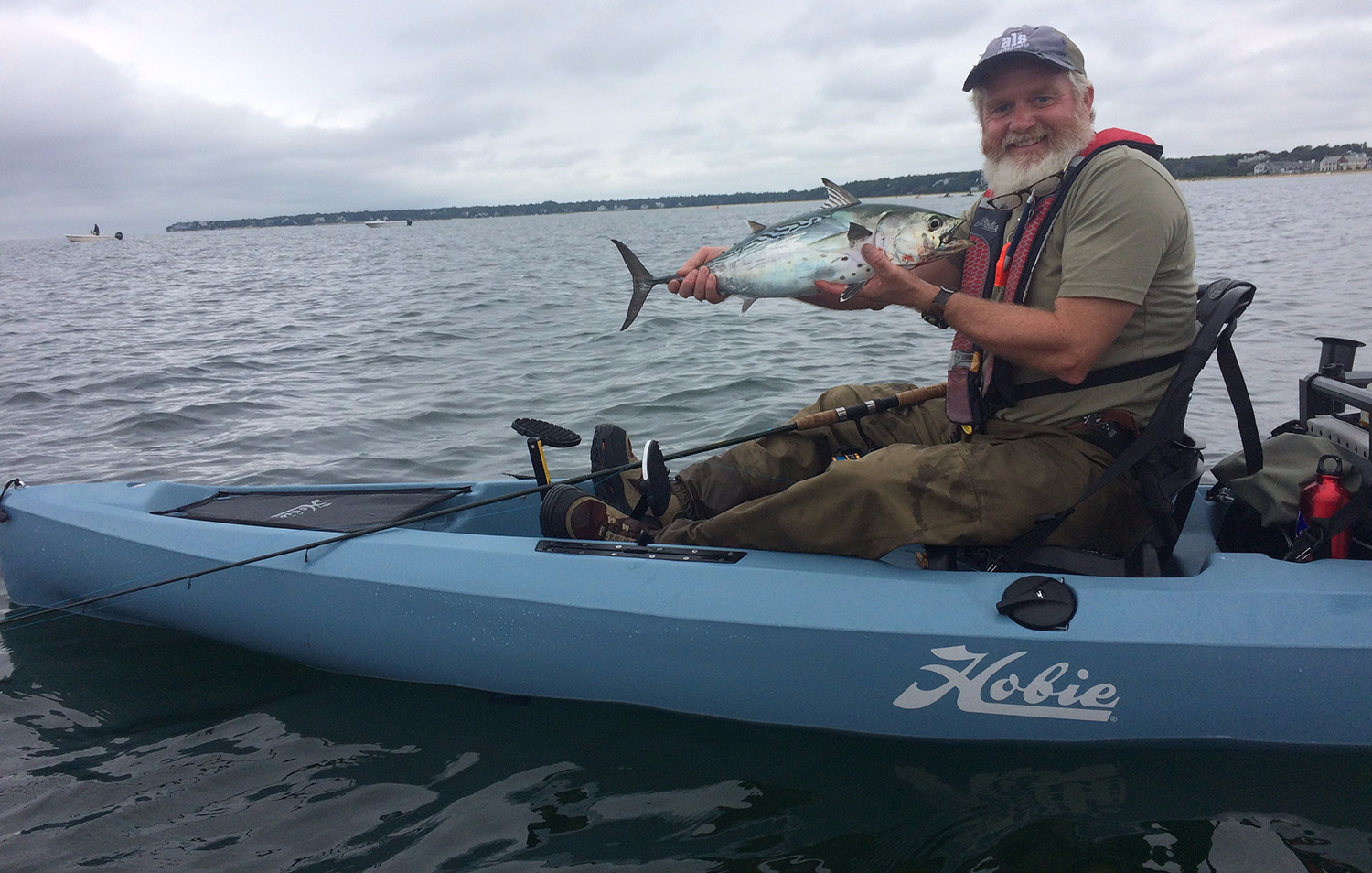 even a blind squirrel finds a nut once in a while

Part of albie magic is that after trying so hard to catch one, you’re transfixed by the fight, by the risk of losing it, by the adrenaline rush of trying to boat such a fighter. Once in the cockpit, it was sweet to see such a magnificent fish blessed with those amazing lines and shades.

Nature is nothing short of totally fantastic.

False albacore can be tough to locate, tough to catch, tough to eat. Even from the beach, albies were landed with surf rods, photographed and released. One guy did keep one, to which a local observed, “My cat wouldn’t even eat that.”

At day’s end, comfortable under a ceiling of dollar bills at the Bayside Resort’s Moby Dick Poolside Pub, catches were reviewed, pictures shared and talk was all about those black dorsal fins tearing across the surface, slicing through a perfect camouflage of grey water and sky. They hit like dynamite indeed and I’d chase them again from that Hobie kayak in a heartbeat.

Todd Corayer is a lifelong fisherman who lives not far from Rhode Island’s Saugatucket River with his wife, who supports his fishing mainly to get him out of the house and a young son who consistently catches more albies than him.