Thou shalt not covet thy neighbor’s wife.

Seems fair but what about thy neighbor’s false albacore? 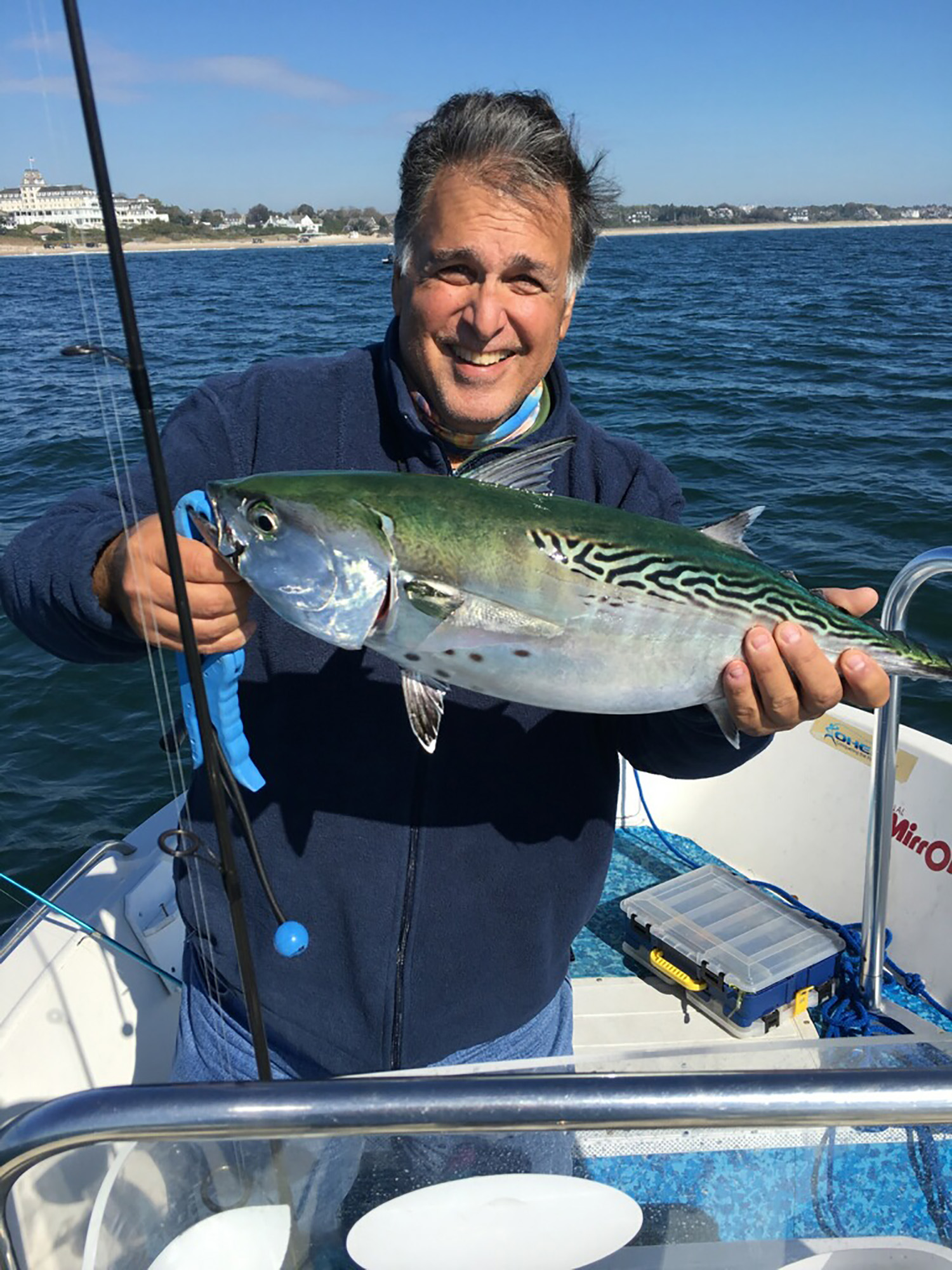 Parading underneath the stars of Watch Hill, mirroring walkers and gawkers along Narragansett’s sea wall, challenging shore casters beneath Providence’s hurricane barrier or taking a tour of Newport’s cliff walk, albies were hanging tight and lots of guys were catching them while others were just reading reports of the former, wondering where they went wrong.  Considering how daytime temperatures have been reasonable for the end of Fall, with just a handful of woodstove nights so far, there’s reason to believe false albacore will hang for a short while.

Albies thrive temperature, bait and conditions. “Typically they leave on dirty water,” Peter Jenkins, owner of Middletown’s The Saltwater Edge, said. “They sure don’t like dirty water. If you you get a big blow on October, then you’re on the sketch. Rain is what dirties the water. We go two big storms in October but no rain,” he added.

Peter Jenkins, center, guides on the water and at the fly table

Peter knows because he lives on the water, happily gives advice for finding fish and stocks the best lures and flies to land them. Peter also knows that Nature gives us clues over time. Indeed, rainwater floats on the surface of seawater, cooling what’s below but we haven’t had much as of late. Two thirds of the state are in “abnormally dry” conditions, that being roughly from west of Providence all the way to Block Island, not “Block”, while the northern third is considered to be in a “moderate drought.” Current seawater temperatures from the hurricane barrier all the way to Montauk are holding in the lower sixties, which is right in the albies wheelhouse. Long-term nighttime air temperatures are predicted to dip to the mid forties and low fifties so surface temperatures will surely follow. With water that consistent for now, your real challenge is finding the bait and some open water. 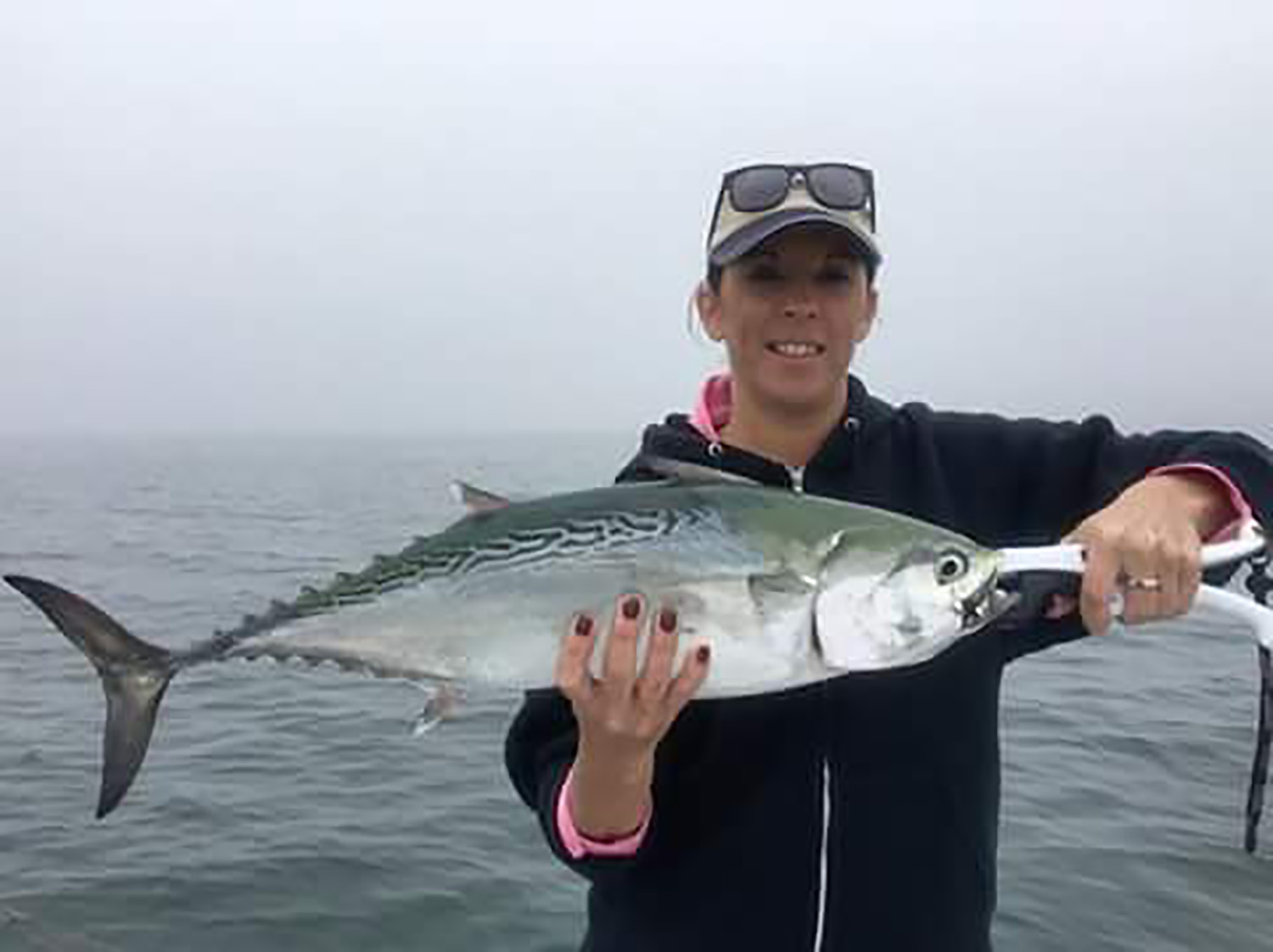 The open water part is much easier these days as lots of folks tore off the November blotter sheet, ordered shrink wrap and called for a haul out.

Like that friendly Canadian bear hunter, just back from weed whacking his tree stand told me, “Winter’s comin’ you know,” which was really something considering it was the third week of June.

All those hulls on the hard means less pressure on fish which means more action for those who watch skies not calendars.

The other key ingredient in keeping albies close is bait. Peter told me, “Every year we say, ‘Oh Jesus, I’ve never seen so much bait, wow there’s so much bait,’ but fact of the matter is we say that every year.” Those wise enough to keep a log of conditions when they go a’fishing have the benefit of recalling what albies were feeding on when they hooked into a pod at what time of year and weather conditions.  Could be falling into that trap of last year’s memory but it seems this year albies are uber finicky. Die hards like Lawrence Thompson have reported being in thick for hours on end but the albies weren’t having it. They were keyed in on a color or size and that was all. 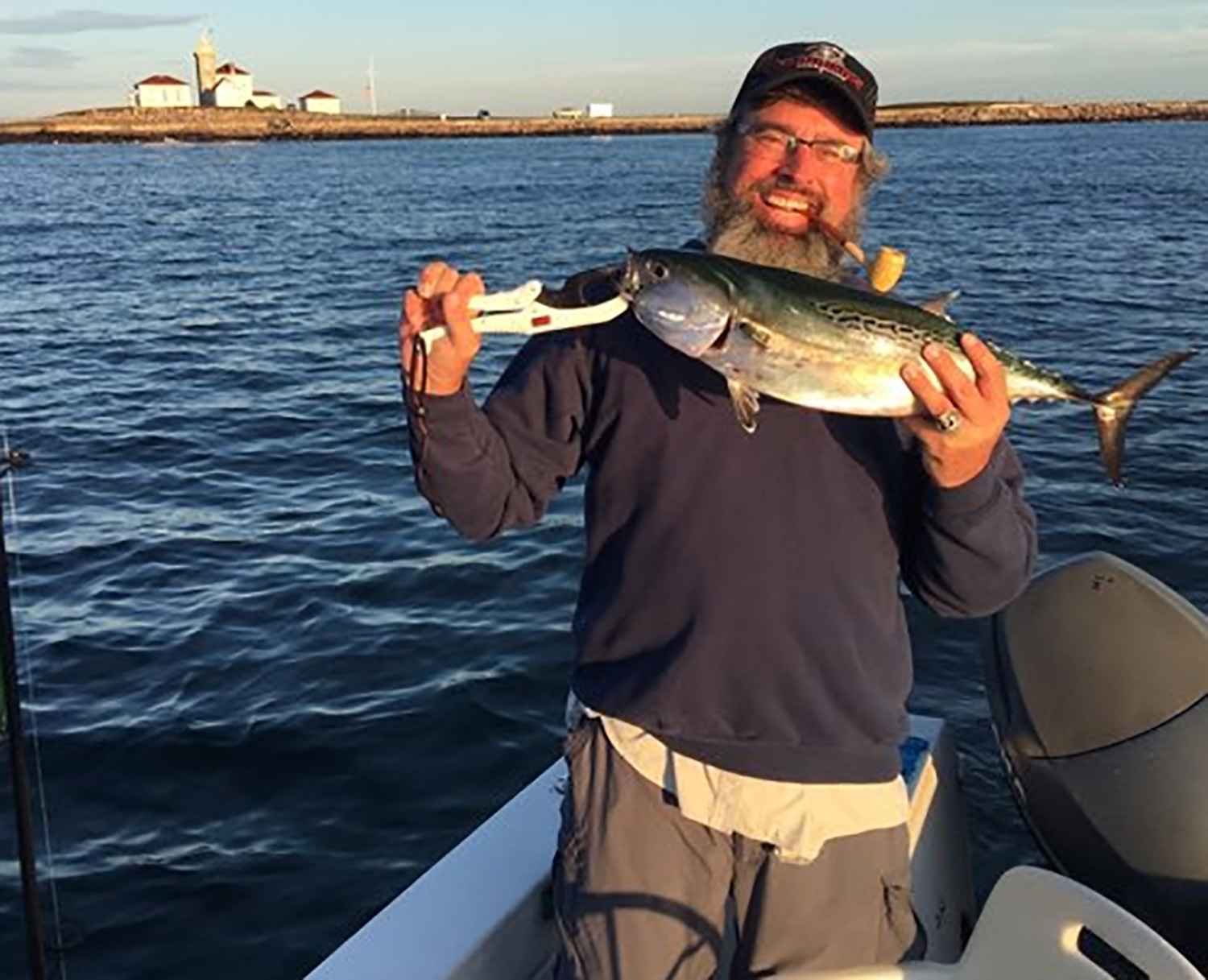 “They feed differently on different bait,” Peter said.  “Anchovies are tight, sand eels, peanut bunker, silversides are loose so they feed differently.” The patterns of confined bait faced with a lightning fast predator will vary, which requires fishermen to present lures and flies differently. If albies are on sand eels, loosely corralled into just a few feet of sandy bottom along a roiling surf, your presentation needs to mimic their behavior. If you are on bay anchovies, it’s tougher to get your guy noticed in a crowd of thousands. You have to recognize that feeding behaviors vary, which may be why your neighbor is doing the selfie thing with his umpteenth albie of the season.

The bait might be a different flavor but the story is the same.

We all know about matching lures to what we think fish are feeding on but Peter also sees something else. He believes the false albacore we see in close are just pods of much larger offshore schools. “This is the mind blowing piece,” Peter said. “They fill in from Niantic to Chatham all at the same time.” Consider that. The schools offshore are so large, these are just pods peeling off for an inshore meal as long as conditions are ideal. Local pods seem to be smaller than those landed around the Mid-Atlantic. Typically albies around here weigh around six to ten pounds but just a few hundred miles south, they are in the twelve to sixteen pound range. 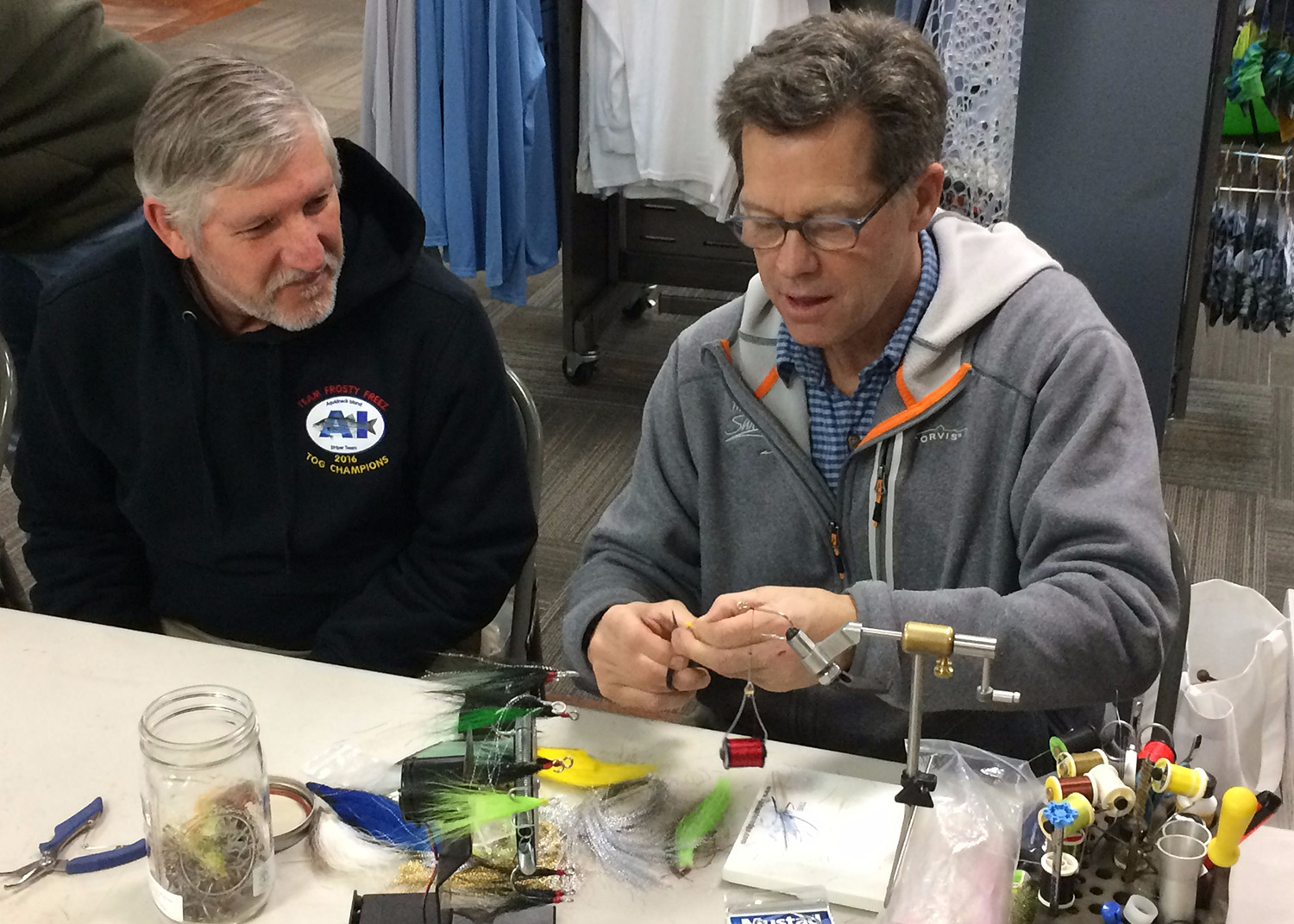 Peter recommends looking for those steep dropoffs where bait gets washed out with the tide. Albies are opportunistic and daring when conditions are right. Brenton Reef, Jamestown, Point Judith’s center wall; lots of spots are holding albies. Until they’re not.

John Buchan gave us, “The charm of fishing is that it is the pursuit of what is elusive but attainable, a perpetual series of occasions of hope.”

All this warm everything has also invited albies into close and shallow waters, like Block Island’s New Harbor, which is a heck of a place to chase fish, especially after the ebb of tourism. Few treats are as sweet as catching albies on the fly from a boat or roll casting with your feet on the sand then taking in some island normal season hospitality with a cold beverage on an empty dock.

Fall is a superior season for so many reasons and until a hard rain falls, false albacore might just remain long enough for your own selfie, before winter gives us and the sea a big chill.

With winter in full force, ponds frozen, snow mounds filling intersection and only the heartiest of ice fishermen catching pike and perch, the rest of us may need to go virtual this week. East End Eddie Doherty will take us Cape Cod Canal surfcasting with a Zoom...
Keep Reading

Recently, a local fisherman was jigging Gulp teasers with green jigs around the Jamestown Verrazano Bridge in fairly shallow waters. Carrying neither a camera nor a working scale, he reportedly landed an approximately fifteen pound, 33 5/8” summer flounder. An old...
Keep Reading