RJ Alves and Matt Tetrault are full steam ahead with their new RI Kayak Bassin’ group and a full calendar of fishing tournaments.

The first event at South Kingstown’s Worden Pond is already full, which shows you how much love there is for freshwater fishing and how much we’re all sick of all this winter. Future dates are still open in several ponds but it’s best to act fast as they limit each event to twenty anglers. The next open event is on Saturday, May 12 at Smithfield’s Woonasquatucket Reservoir, aka Stillwater Reservoir, aka Stump Pond. Stump is 304 acres of largemouth heaven with plenty of structure and open water to target the finickiest of bass. Registration starts at 5:30 a.m., lines go in at 6:00 a.m. and come out at 2:00 p.m. The entry fee is $50 and for an extra ten spot, you can get in on the lunker smallmouth bracket.

Competition on a pond may not be everyone’s idea of fun but maybe that’s part of the point here. These two have really keyed in on a growing interest in freshwater fishing; the fact that there’s a small group of fishermen vying for a prize shouldn’t discourage anyone from entering and seeing how many fish they can catch over a few hours on a beautiful pond. We can’t maintain a bridge or keep our hands out of the General Fund but we’re some lucky to have so many beautiful, prolific ponds in the Ocean State. You can learn more about the group, administrators and rules at their Facebook page.

As Stump Pond sits atop the wonderful nineteen mile long Woonasquatucket River, which winds it’s lazy way to the top of Narragansett Bay, it’s only fitting we encourage you to help the Woonasquatucket River Watershed Council with their selfless efforts to keep the river clean and flowing.

You can join them for the kick off of their Clean Days on the Greenway Series from 9:00 a.m. to 4:00 p.m. on Friday April 13 on Promenade St and Kinsley Avenue. If you’re going fishing and can’t make it, you can pitch in on their Greenway Parks Community Clean Day on April 28 from 10:00 a.m. to 2:00 p.m. at Donigian, Riverside and Merino Parks. 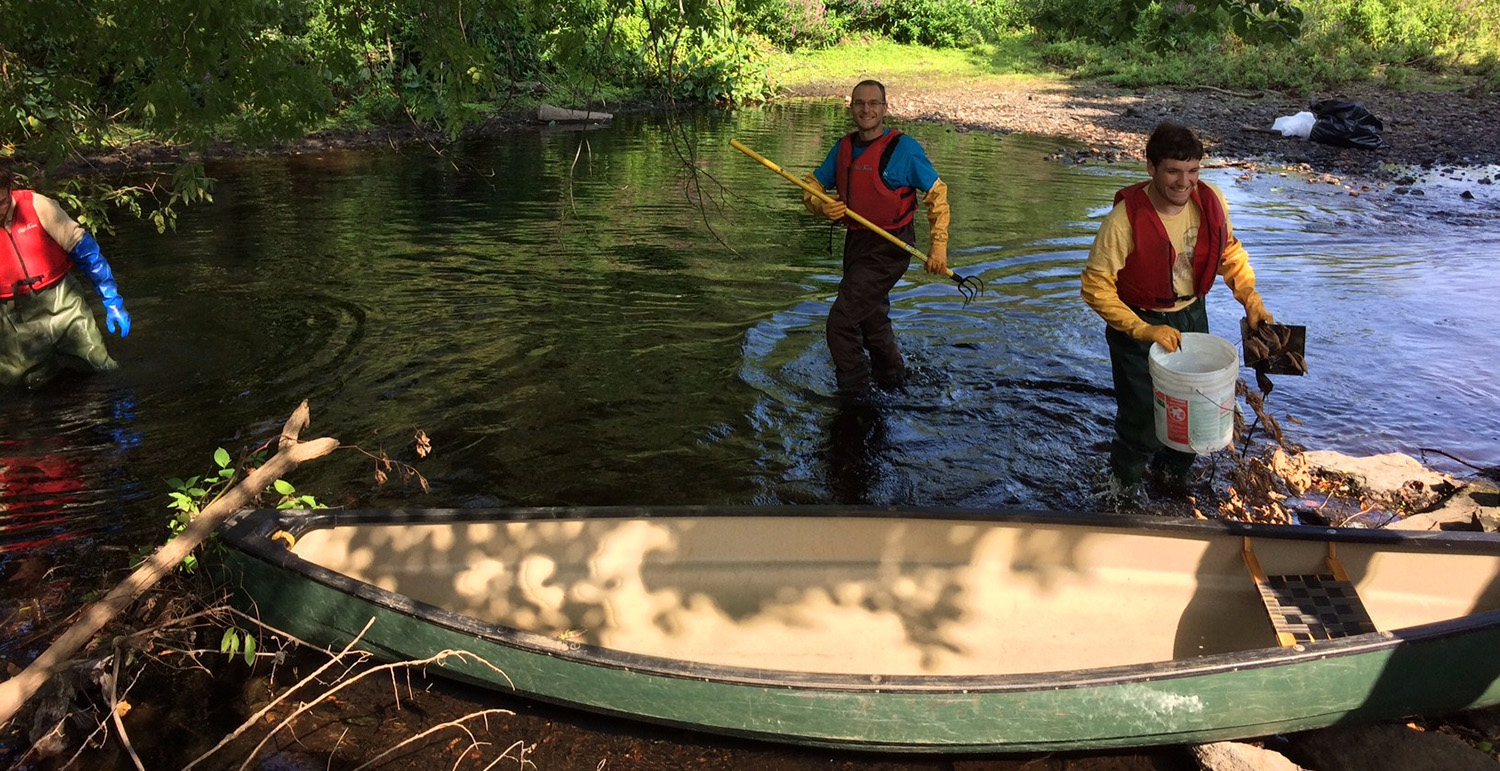 We’re big fans of the Woony volunteers because they’re dedicated, know how to make pulling algae covered tires and disgusting old televisions from muddy river bottoms seem fun and at the end of the day, when everyone’s high-fiving after applying hand sanitizer and feeling good about all that hard work, they help you understand just how important it is to restore a river which has provided so much for so long. 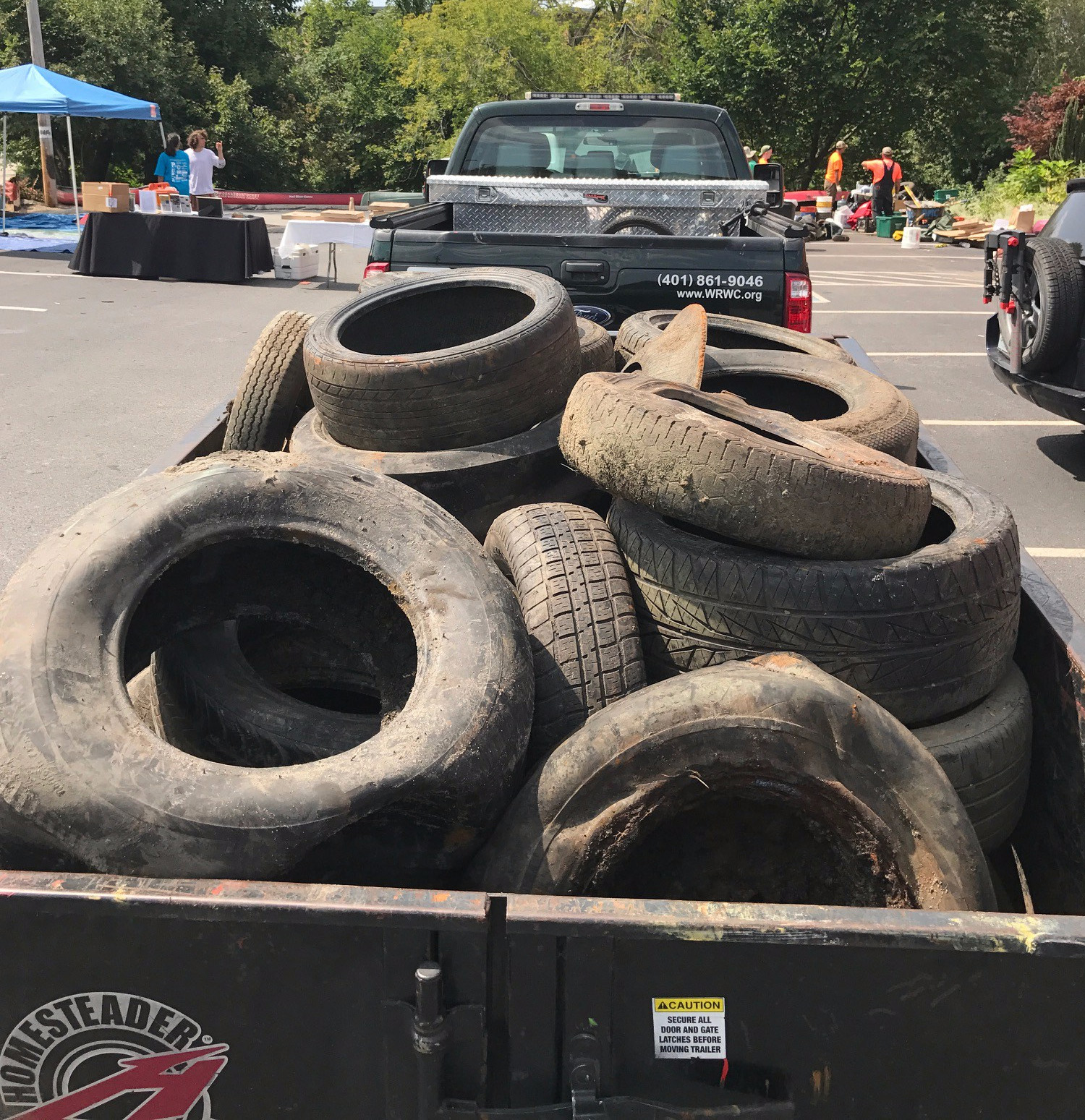 When you need a trailer to haul away so many tires, you know that’s too many tires to haul out of a river.

Historically, anglers have not targeted sea robins in earnest; they’ve fallen under the unsuitable moniker of “trash fish” but that’s hardly true.

Properly named Prionotus carolinus by Linnaeus in 1771, you can find them along hard bottom that’s fairly uniform, oftentimes buried up to their eyeballs in sand, laying in wait. Or perhaps, taking a nap. They prefer a diet of crustaceans, shrimps, clams, mussels, some species of worms along with forage fishes like herring and menhaden (keep that in mind when baiting a hook) and the occasional winter flounder, which we’ve pretty much fished to the edge of local existence. Sea robins generally grow to about a foot long and use their pectoral fins to disturb sediment where prey may be hiding. The meat is firm, excellent in soups or marinated. Barton Seaver, author of the wonderful “Two If By Sea” cookbook, likens their taste and texture to monkfish, which many know as poor man’s lobster. That’s a fine relationship and a fish worth catching. The contest runs from April 1 to November 31 and while small details like entry fees, prizes, and rules are still being worked out, the important message to is to add OSKAA to your searches and look for more announcements.

And let’s not forget about the Striper Cup.

Hopefully Kevin won’t mind that I borrowed this picture from www.onthewater.com

A brilliant creation of On The Water magazine folks, it’s now the region’s largest saltwater fishing contest. Contest waters run from the massive tides of Lubec, Maine all the way to end of the yellow plate state. They have done an admirable job promoting the catch and release category and prizes are awarded each month for all sorts of entries. Fishermen can register in either or both the shore or boat category, there’s a really cool youth division and the whole deal wraps up in September with their now infamous StriperFest on the Cape. It’s a Summer and Fall of opportunity to win prizes, enjoy a little fame on their website and maybe, just maybe, tow away the grand prize of a brand new Cobia boat. Details can be found on their website and in their monthly magazine. And while you’re there, check out Matt’s awesome picture with a gorgeous striper at http://www.onthewater.com/the-striper-migration-when-will-the-bass-return. Wicked cool.

Whether your fancy is for fresh or saltwater, high competition or low key kayaking with a small group, catching stripers or tasty gunars, this year we have it all, right here in Rhode Island.