Spring is getting busy on the lakes, rivers and rock walls. In the mist of all the rain and wind, Spring is for fishing and between the hot largemouth bite, emerging salt ponds stripers and shad trees ready to pop, a few more warm days and this state will be awash in fish stories.

Matt Tetreault swept up first place in the RI Kayak Bassin’ group’s inaugural fishing contest in South Kingstown’s Worden Pond. Matt landed three largemouth bass, measuring 22”, 20.5” and 17.5” on a bluebird day. Because Worden measures over a thousand acres, offers little room to hide when the breezes come and is shallow, with the deepest sections barely more than six feet, it can be tough to find the sweet spot where bass seek both cover to keep them hidden from predators and warm temperatures. Sixteen registered kayak anglers hit the pond early and fished until mid-afternoon, taking pictures of their catch through the day. RJ Alves placed second with a 21” bass and

You can learn more about the group and future events at their Facebook page.

For scouting new waters, RIDEM has an excellent listing of state ponds bathymetry of ponds on their website. While Nature is always subject to change and a few of the black and white renderings verge on minimalist Rorschach images, they’re a great tool to help with deciding which ponds look interesting, where vegetation might thrive or where the deep holes are. You will find it at http://www.dem.ri.gov/maps/mapfile/pondbath.pdf.

If you’re lucky to catch one of those funky looking golden rainbow trout, send a picture to jessica.pena@dem.ri.gov and she’ll send you a pin. For real.

Peter Jenkins and the Saltwater Edge crew are offering a series of casting clinics for surf fisherfolk and fly casters alike. Peter is an Orvis guide with an unwavering sense of patience; he’ll teach you how to set up a long-distance cast with a ten-foot surf rod or bring a sense of grace and pace to your nine weight. Even those who have several years under their wading belt catching fish from the sea will appreciate a few new tricks or style nuances which ultimately just might help you catch a few more.

The Surfcasting 101 class covers the basics of safety, knots and which lures work the best in different conditions.  The Saltwater Fly Fishing 101 introduces or perhaps reintroduces some fly casting basics, tips for wading through the surf safely along with ample coverage of knots, flys, lines, leaders and tippets. Sessions generally happen at The Saltwater Edge, 1037 Aquidneck Avenue in Middletown.

Old timers will tell you the new class of stripers arrive when shad trees display their first blossoms of the season. Block Island’s Molly McQueeny O’Neill reported those with springtime allergies are outnumbering trees with blossoms but more buds are appearing every day so there you have it. 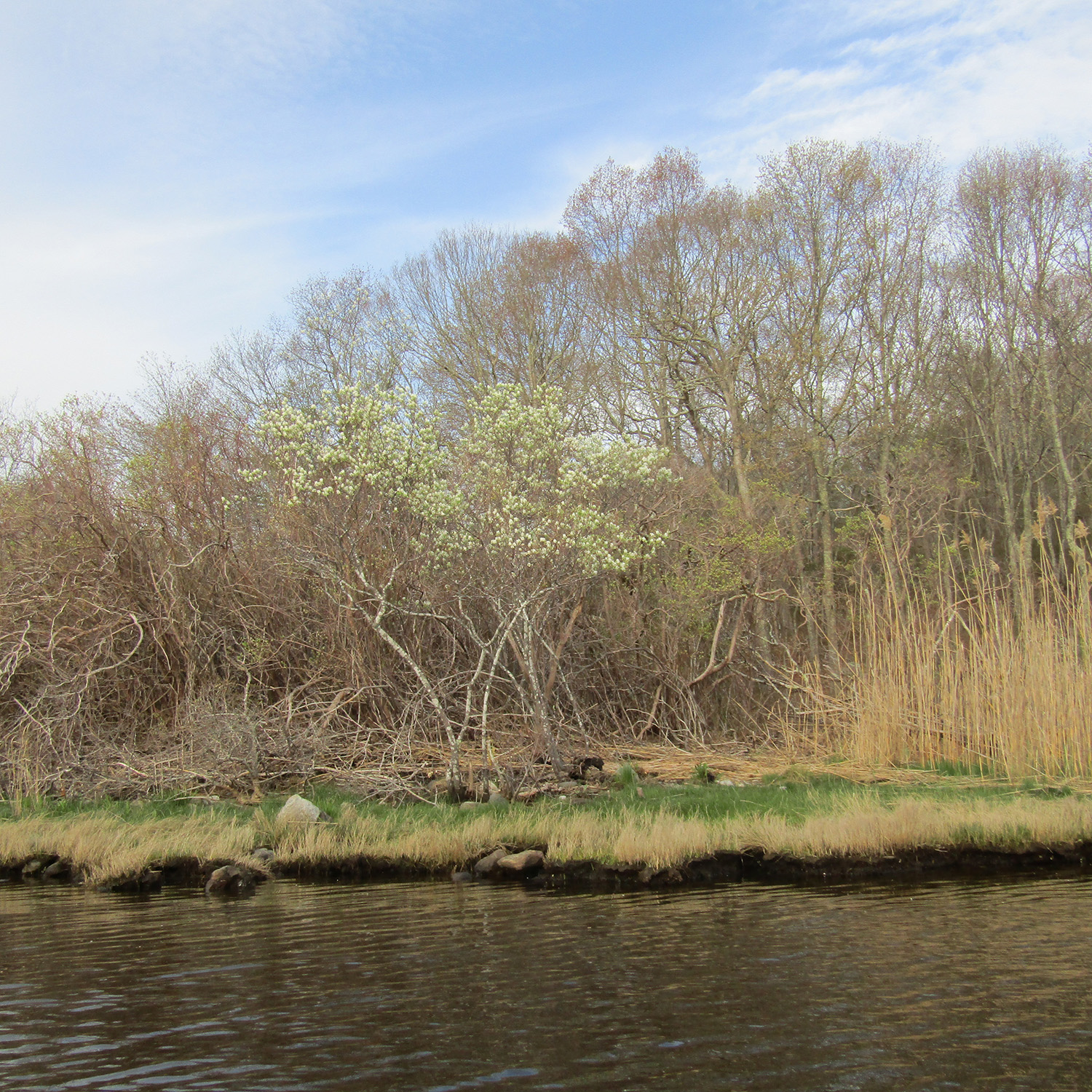 First the whites of shad then the scales of bass

Lots of reports have surfaced about schoolies making their annual and brief appearance at Galilee’s West Wall with social media increasingly showing off small bass with even smaller sea lice, which is a sure sign of their collective travels.

Legions of surf casters are packing in like sardines on the almost 4000’ long rock wall, built to protect boats and people from rough surf. There’s plenty of parking at the state beach lot just to the west with an enjoyable beach walk to build anticipation for catching your first striper of the season or just finding a spot with enough room to cast.

Overheard was one fisherman telling another about his dozen schoolies landed and released from the wall while the other lashed back that he had, in fact, landed 400 in just a few days.

While the fishing may not be quite as good as the latter’s exaggeration, it is a hot spot for a few weeks.

A sun rising earlier with days longer and successively warmer means a return of the other great fish of Spring, our beloved buckies.

River herring are anadromous, living in the ocean then returning to their natal waters to spawn. Man-made many rivers and streams a real struggle to reach the ponds of their birth, as we clogged them with chemicals, dams and debris but several years of improved regulations and a change of thinking about how valuable those dams are to our history and future have greatly improved their passage in several waterways.

Keith Gonsalves keeps an eye on the Ten Mile River Watershed and has reported buckies passing over the whiteboard positioned to allow observers to see fish more clearly.

The Watershed group does some amazing work protecting the river and keeping people informed about it health.

North Kingstown’s Gilbert Stuart is a well-monitored spot where you can see them make their passage up to Card Pond, as is the fish ladder at the Post Road dam in Wakefield.

Fish are all over the salt ponds and upper Narragansett Bay, just like the squid and early schools of pogies. And especially on our magnificent freshwater ponds, where bass anglers are really having a blast, Spring has sprung, if not exploded.

If you're planning on fishing for trout on SPRING"S GREATEST DAY, April 8... you’ll need a freshwater fishing licence from RIDEM. Resident licenses cost $18 while visitors can fish for $35. If you want to keep your catch, a trout stamp is required for an additional...
Keep Reading

Along miles of winding trails at The Preserve at Boulder Hills, Fall is celebrated with an English pheasant hunt.

Unicorns, rainbows and a trip to The Preserve