You keep your arm straight, put some lead line in your mouth and swing your hips. Sounds like a lame country line dance number I know but in fact, it’s the short course on how to throw a cast net. Bait is a cost when fishing and if you’re on the last minute side of being prepared, it’s something you likely don’t have so to help us understand the basics, mechanics and real joy of throwing a cast net properly, I turned to the one guy I knew would know. 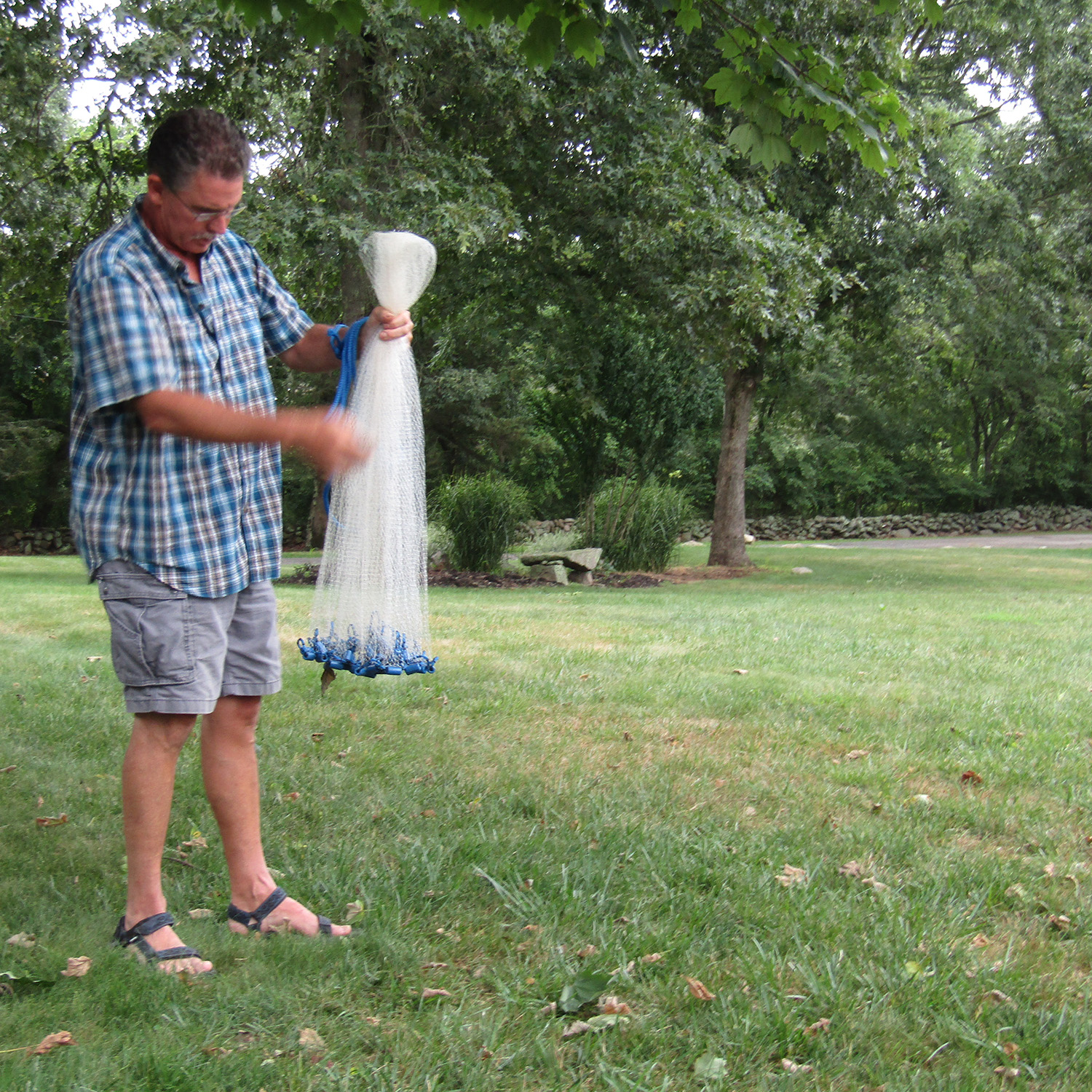 “I learned from a Redneck down in Florida and I never forgot,” Steve Babcock said.

Since we’re a little shy on Redneck’s on our side of the Mason-Dixon line, here’s the basics. It’s meant to be thrown in a smooth series of actions resulting in the business end landing like that pancake and trapping bait on the bottom. The purse line gets pulled taught, smoothly drawing in the bottom, which then hauls the whole deal aboard with the goods.

It’s a real skill which takes time to perfect but anything worth doing is worth doing right. 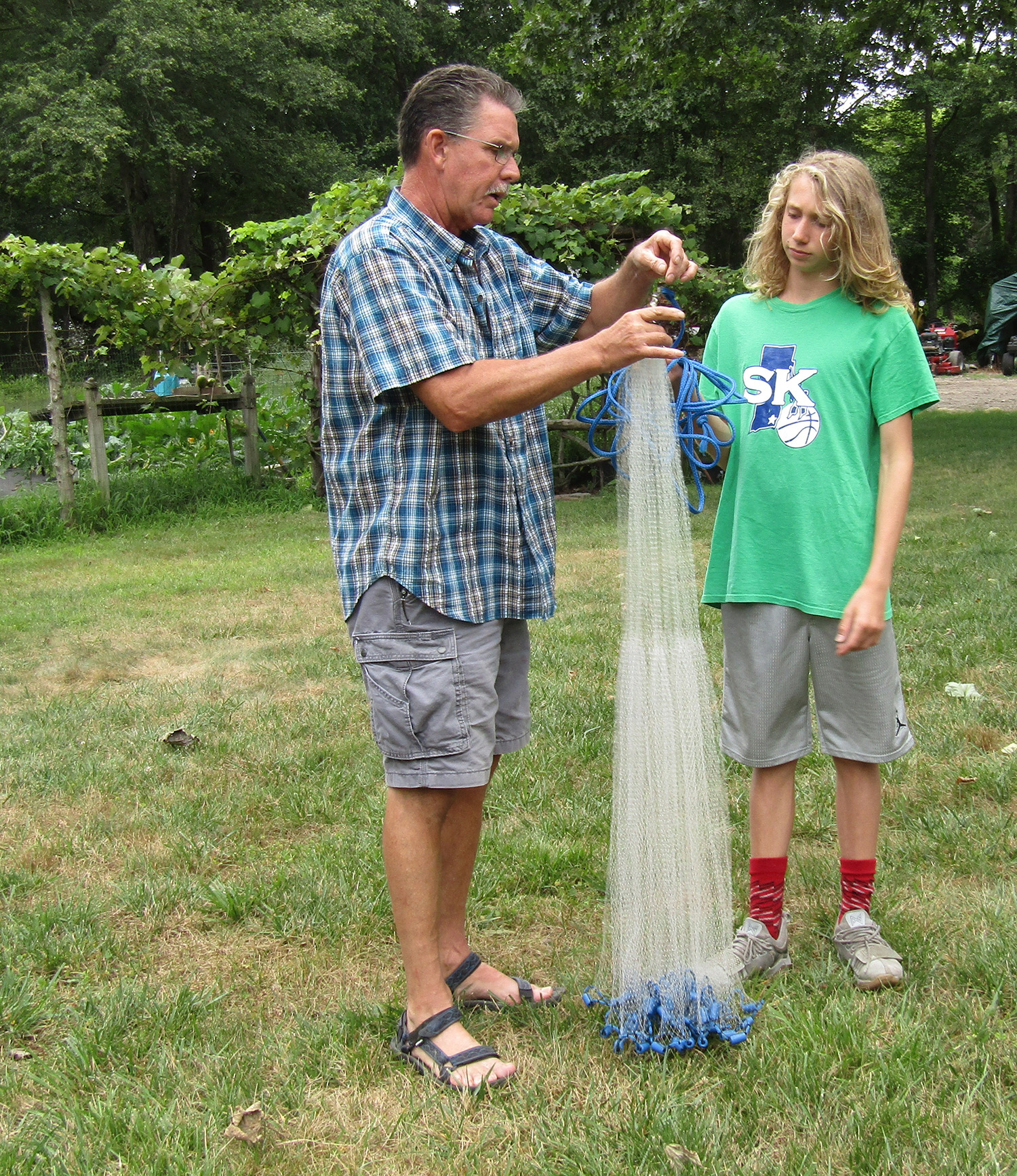 Steve works with the next generation of fisherman

“Follow your arm,” Steve instructed. Left or right handed, holding your arms straight will encourage the rest of your body to follow suit and make the net pay out flat. The first step is to make sure the mainline is tied to your wrist with a half hitch or such, lest you throw the whole deal overboard with hopes of catching some bay anchovies and instead lose your fifty dollars into a river, which is where I snagged it years ago thinking I was onto the largest fall striper of my life. The rest gets coiled loosely around your palm, which should face upwards

That will be important shortly.

“Shorten it up,” Steve said. “Now reach with your other hand to the rings which encircle the net’s lines. Draw in a foot or so, take both sections, fold it over and look down, so the purse line ends up just where it should be,” Steve added, as if I knew where it should be. By now, the net should be laying loosely around your boots somewhere. Reach straight down, right along your leg, then take hold of one weight. Throwing a cast net is a serious skill which looks really easy when the right person is throwing it, but it’s not

“You gotta put some in our teeth,” Steve said, sounding like the Godfather of South County. 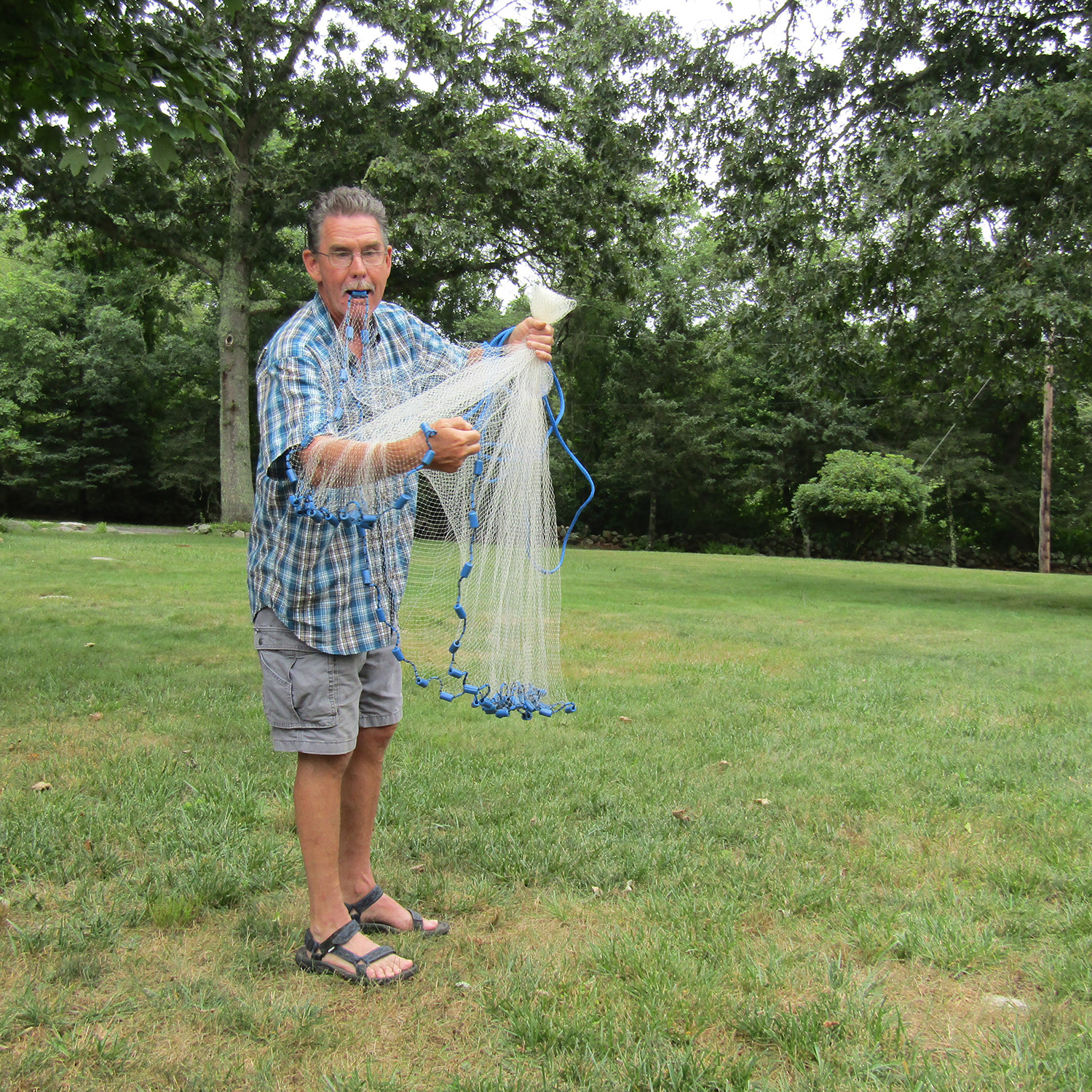 Just before the pancake meets the water…

For years, he fished up and down the East Coast with the Roebuck’s and a handful of local fishing royalty, earning every dollar and sore muscle, catching more swordfish, tuna, squid and whiting than most folks could ever imagine because he learned how the ocean worked, that smart fishermen’s moves are guided by common sense and after time, wisdom. He’s awash with stories of fish to the gunwales and engines strained by the haul. So one weight needs to go in your mouth but if your net has real lead weights, it’s probably better to take hold of a piece of netting in between leads. 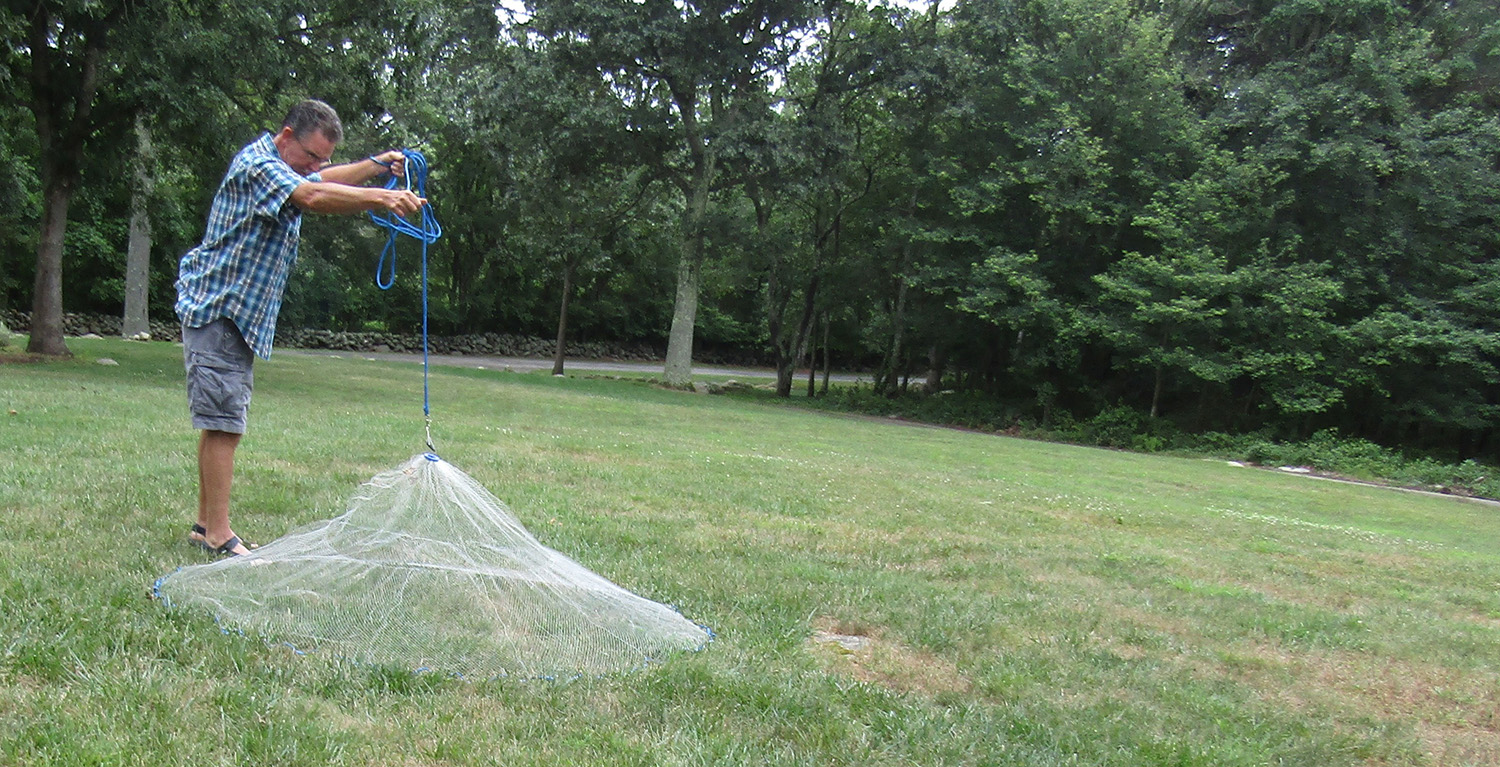 A perfect landing, a perfect haul

“You need to hold your arm up. I think I already told you that,” he said blankly.

Good fishermen like Steve have that steady, practical tone from a get up and get shit done attitude. It’s refreshing in a world that’s bending to the slightest social breeze but he wasn’t being gruff; good fishermen have little time for wasting and he meant it because if you don’t purse up enough of the netting, it’s going to flop out and won’t look like the pancake later on. With your mouth full, run your hands along the net for a foot or so, gathering up a solid handful, enough to toss over the bait. 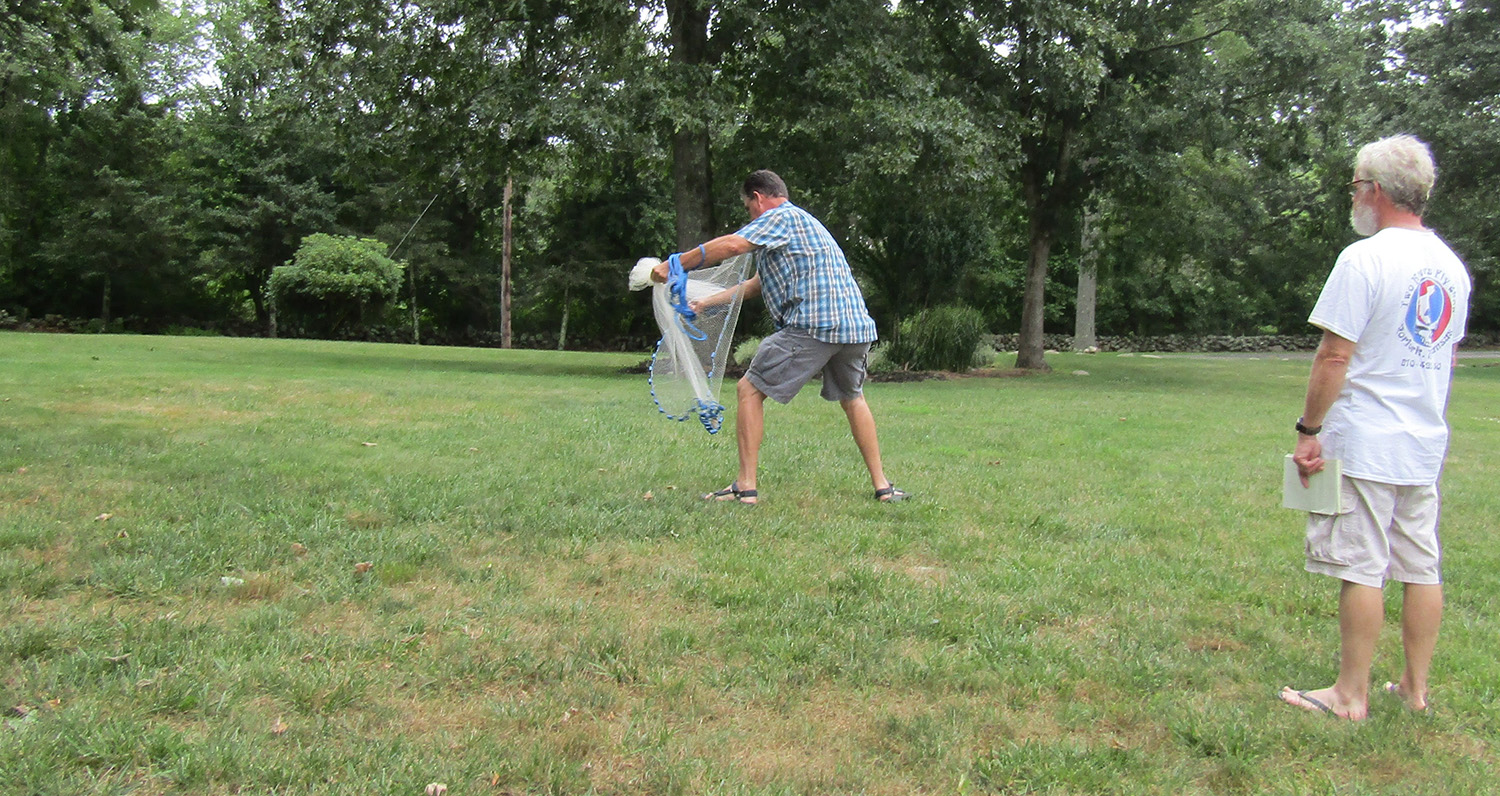 A behind the scenes look at an aging outdoors writer watching a real fisherman toss a cast net.

“The line has to fall off your hand,” Steve said. With mainline at the ready, net tight in your throwing hand and a weight in your teeth, it’s time to work those hips. Lean back in the direction opposite of the bait so that you’re coiled up like a Greek discus thrower and let it fly. Keep that mainline hand flat and don’t forget to unclench. The cast net should lay like a pancake on the grass or water before solidly drifting down and encircling the bait.

Okay, he was a little gruff but that’s exactly how things work on a working fishing boat: you need to figure things out fast and do right before someone gets hurt. It was 1981 when Steve learned to throw a cast net; he hasn’t forgotten because the wise catch more fish. Plus, nothing’s really that hard, it’s just time consuming. You might get all this in a few takes, it might take some practice, it might take years.

“That’s half the battle, trying to bowl a strike,” he chuckled.

The following series tells the tale of how a net is staged, tossed, presented and hauled. He’s one smart swamper, that Steve Babcock 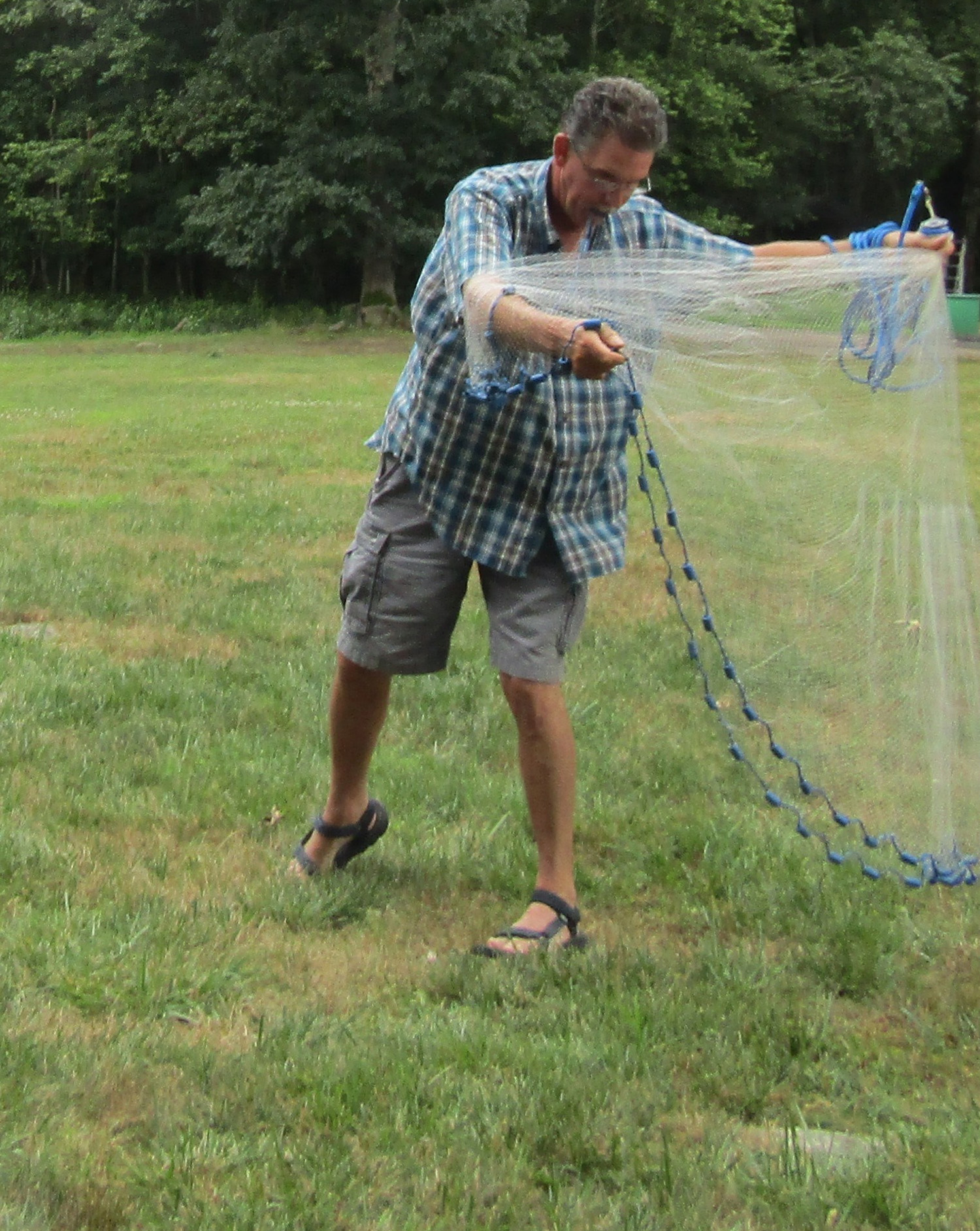 A little in the teeth, a little at the feet… 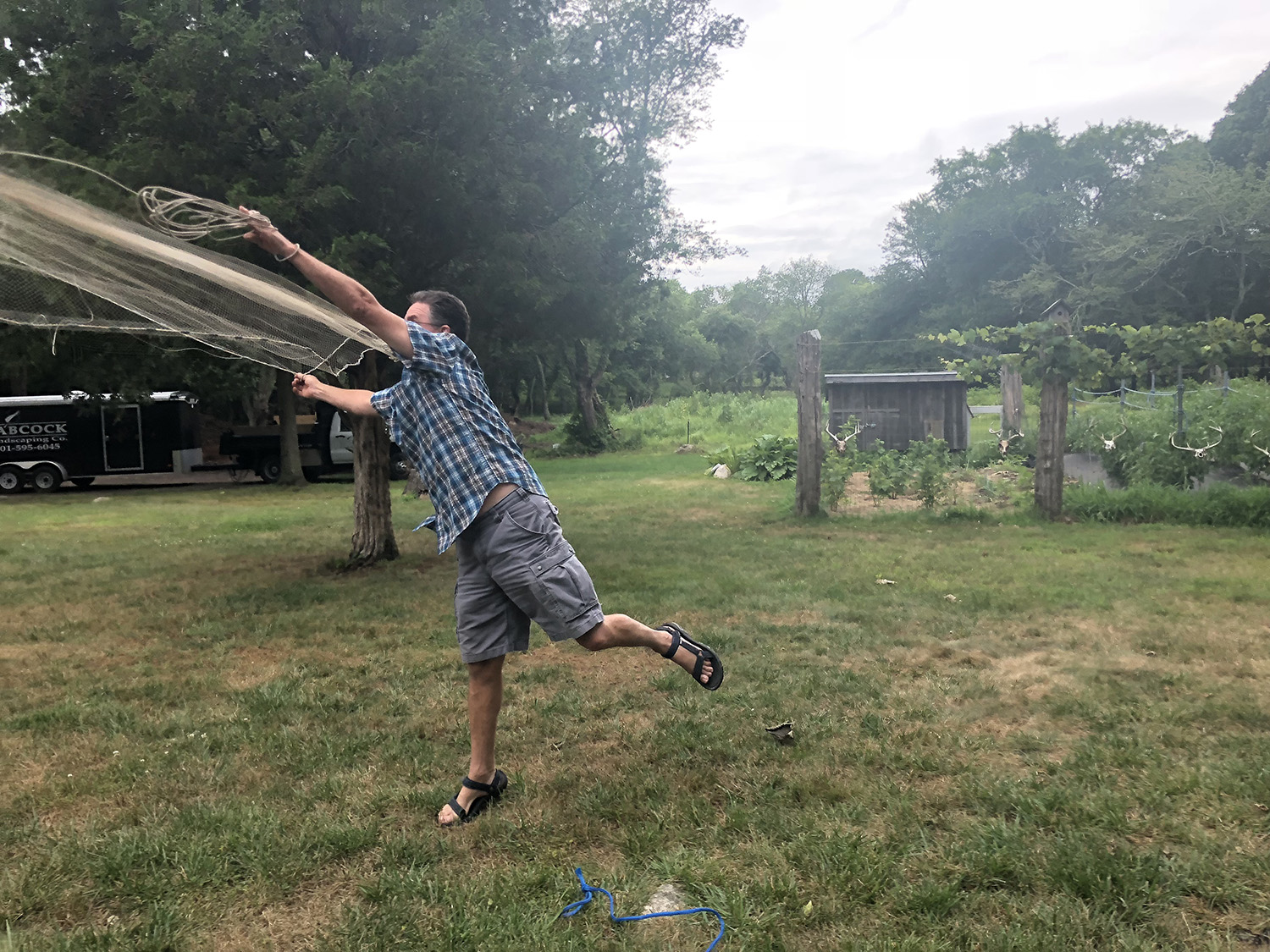 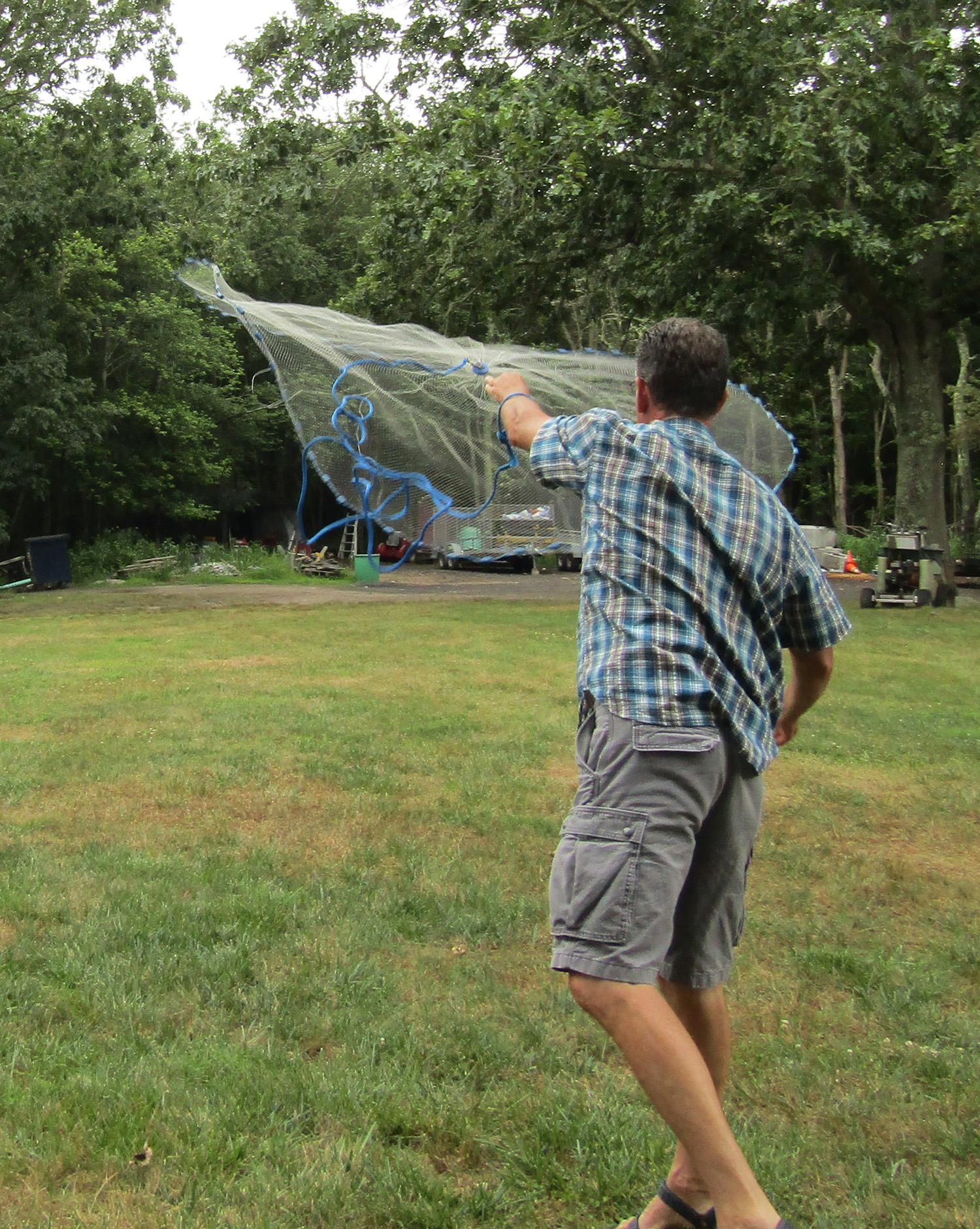 Bingo, off she goes, nice and easy off the hand 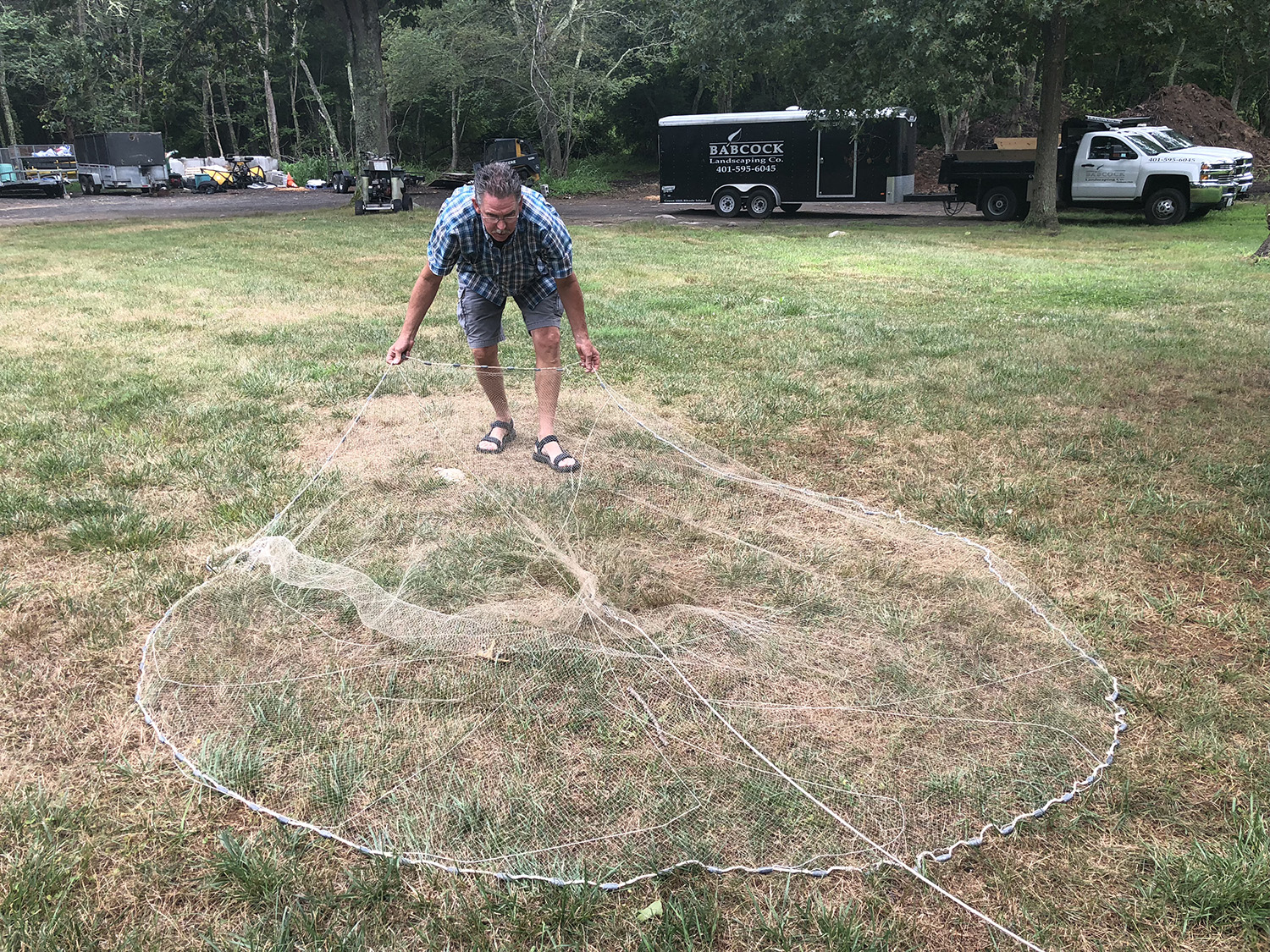 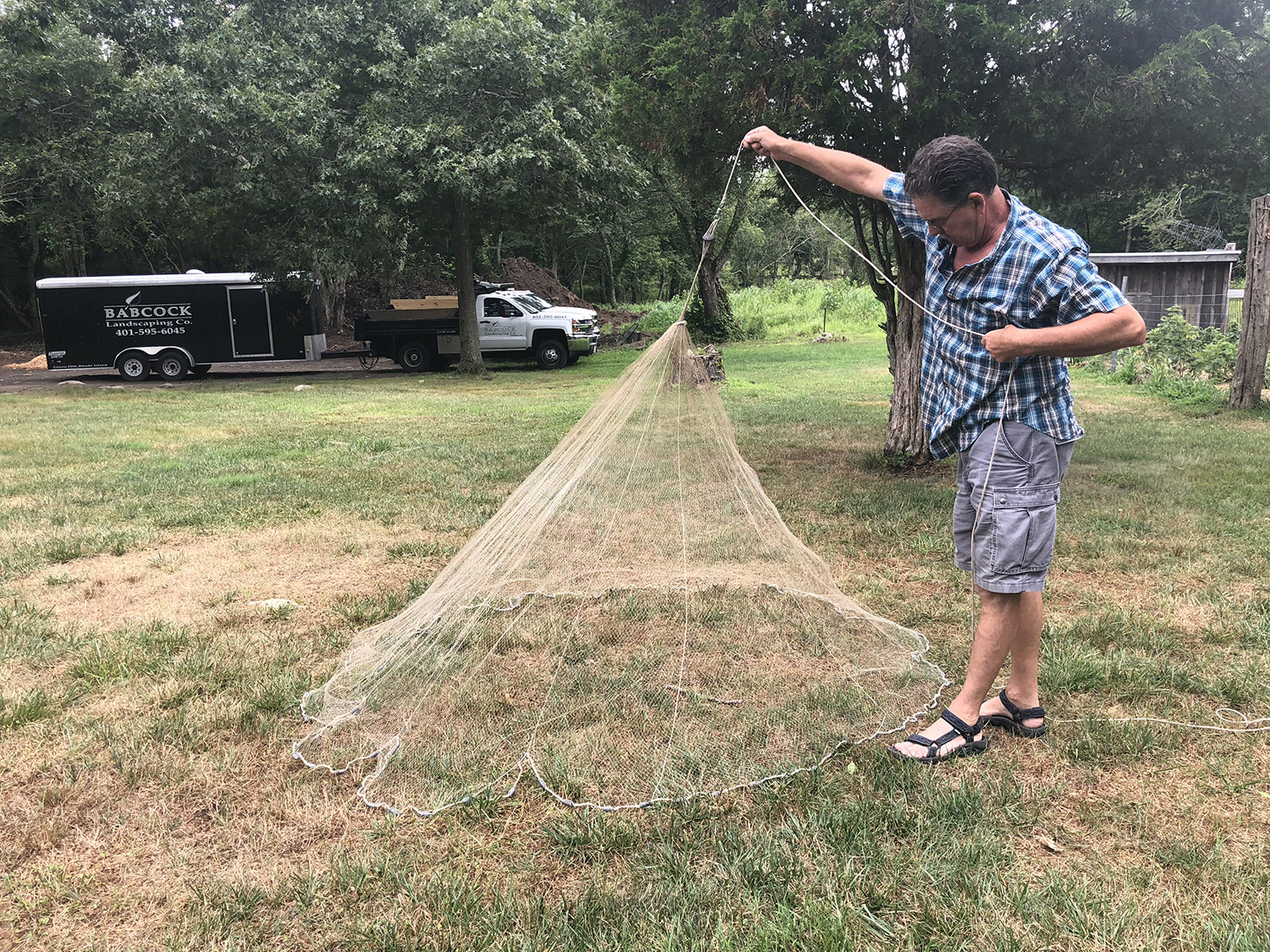