“Ready? We can change the world!” cried Sam, captain of a floating, rolling dock anchored in South Kingstown’s Potter Pond. 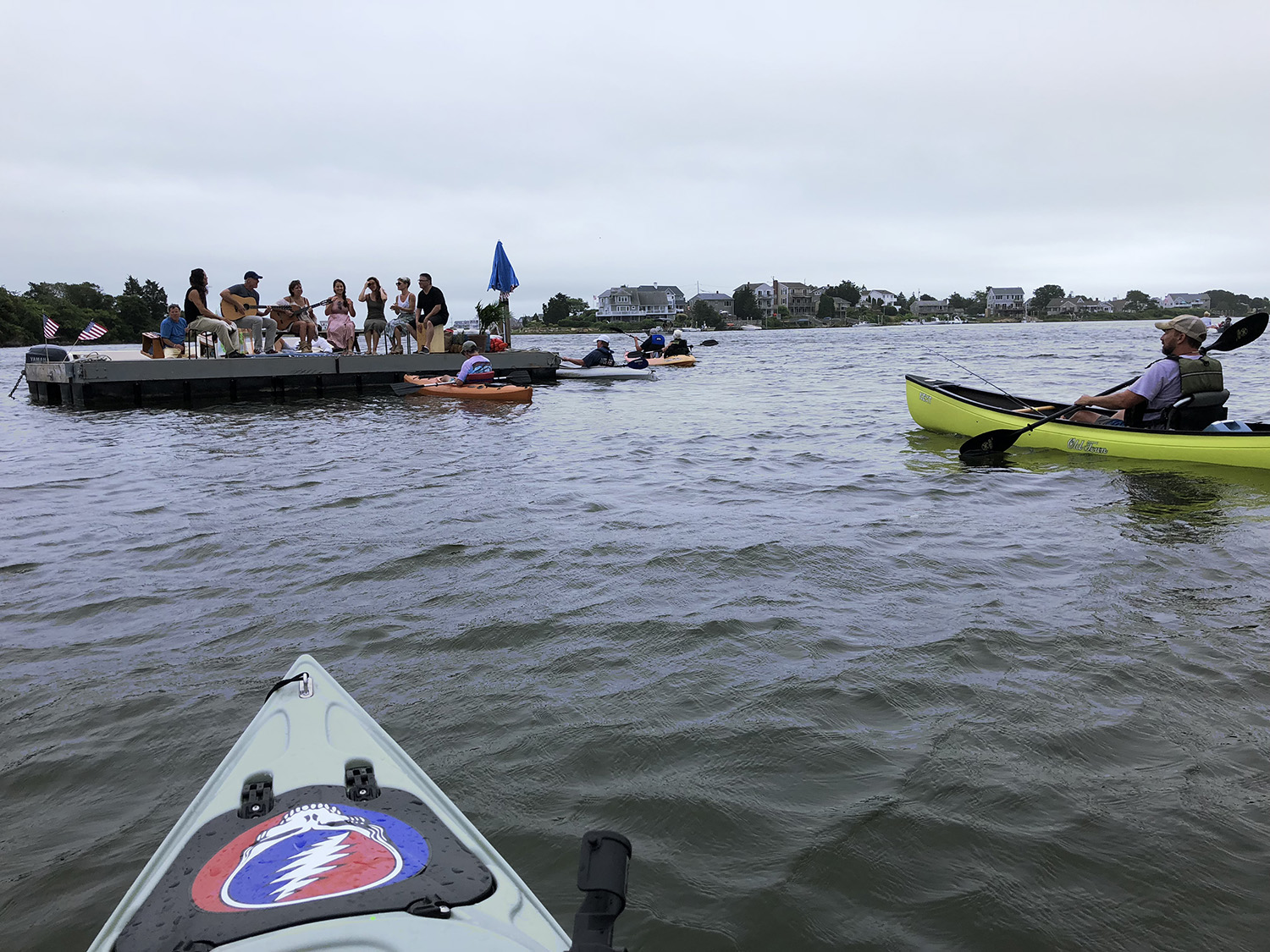 With a southern breeze freshening, seven players and singers from Barcelona blessed Segar Cove with riffs and some long, amazing Flamenco harmonies while some forty boats, kayaks, stand up paddle boards, jet-skis and a solo canoe, her bow draped in a lei of yellow and red flowers, floated about in a sign of unity for the Save Potter Pond organization. It was a special day in South County, hearing expat Sam Lardner and Barcelona sing songs from the old country, from The Pretenders and even Elton John on a good day to talk about protection.

Another happy Segar Cove fisherman taking in the tunes

Save Potter Pond formed in response to a nearby shellfish farm business’ proposed expansion to lease three acres of Segar Cove. The applicant indeed enjoyed a level of support from the flotilla; some had patronized his restaurant, some shared stories of watching him dive for shellfish in the pond many years ago, some admired his success. Some others were not all that impressed but a common thread was a feeling of overreach, almost of an invasion into a small piece of water with a myriad of users who felt blindsided by such proposed expansion and a lack of communication as the process was initiated and proceeded. 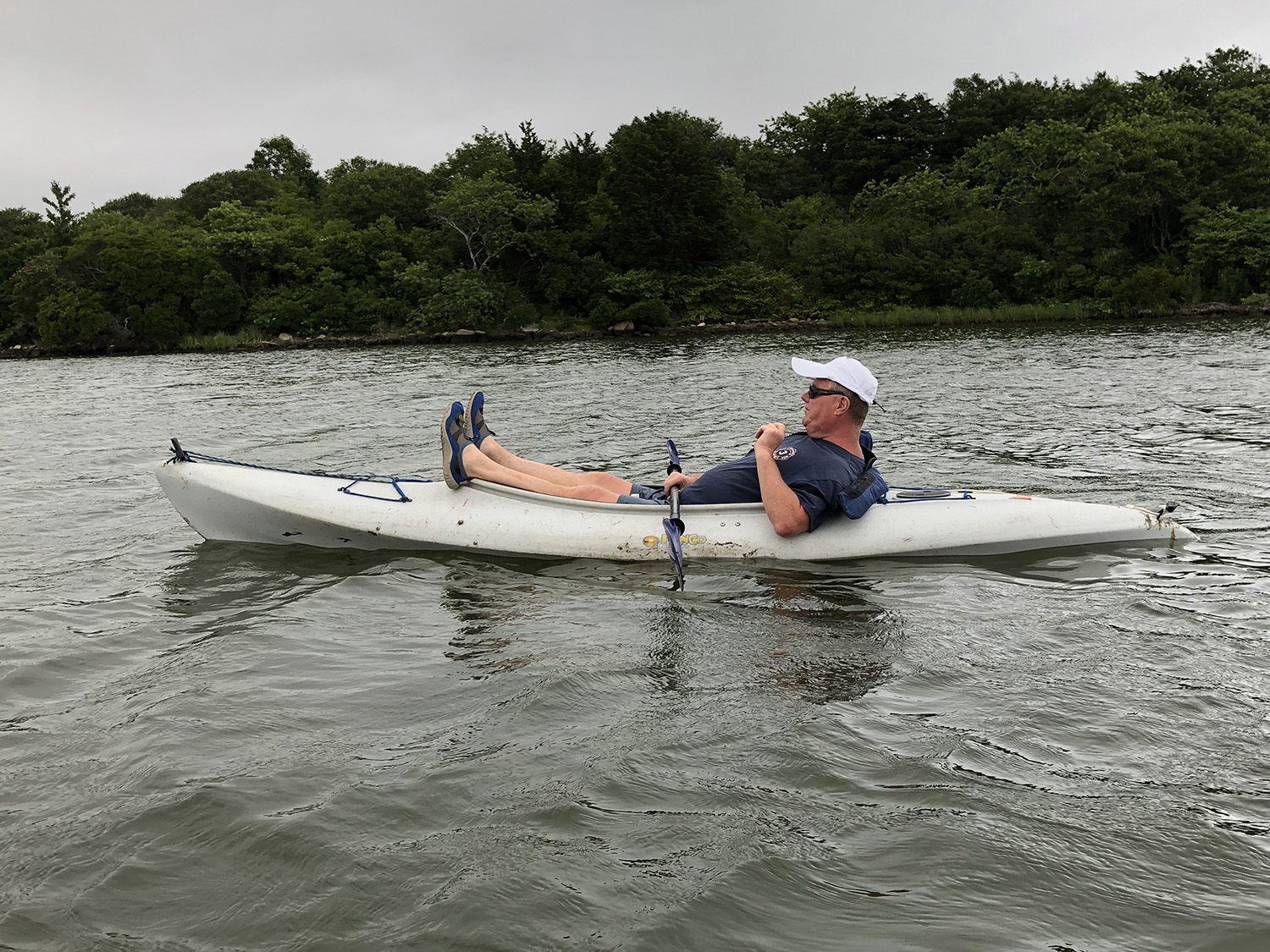 As aquaculture continues to grow, as it likely will considering it’s darling status on state economics press releases, it’s footprint will increase pressure on other users and taxpayers. The state relies heavily on their five percent rule, established as a maximum presence for aquaculture acreage in certain waters. The state may be relying too heavily on that rule.

If that five percent outweighs needs, loves, uses and histories of so many recreational or commercial users then how is the system fairly balanced? While understanding some uses are limited by season, like water skiing, how are they less important in a salt pond than a company which removes acreage for private use?

So there’s the rub: the five percent rule is the bar but in cases with such strong vocal, physical and literal opposition, it should not be the absolute.

Because the State can doesn’t mean they always should. 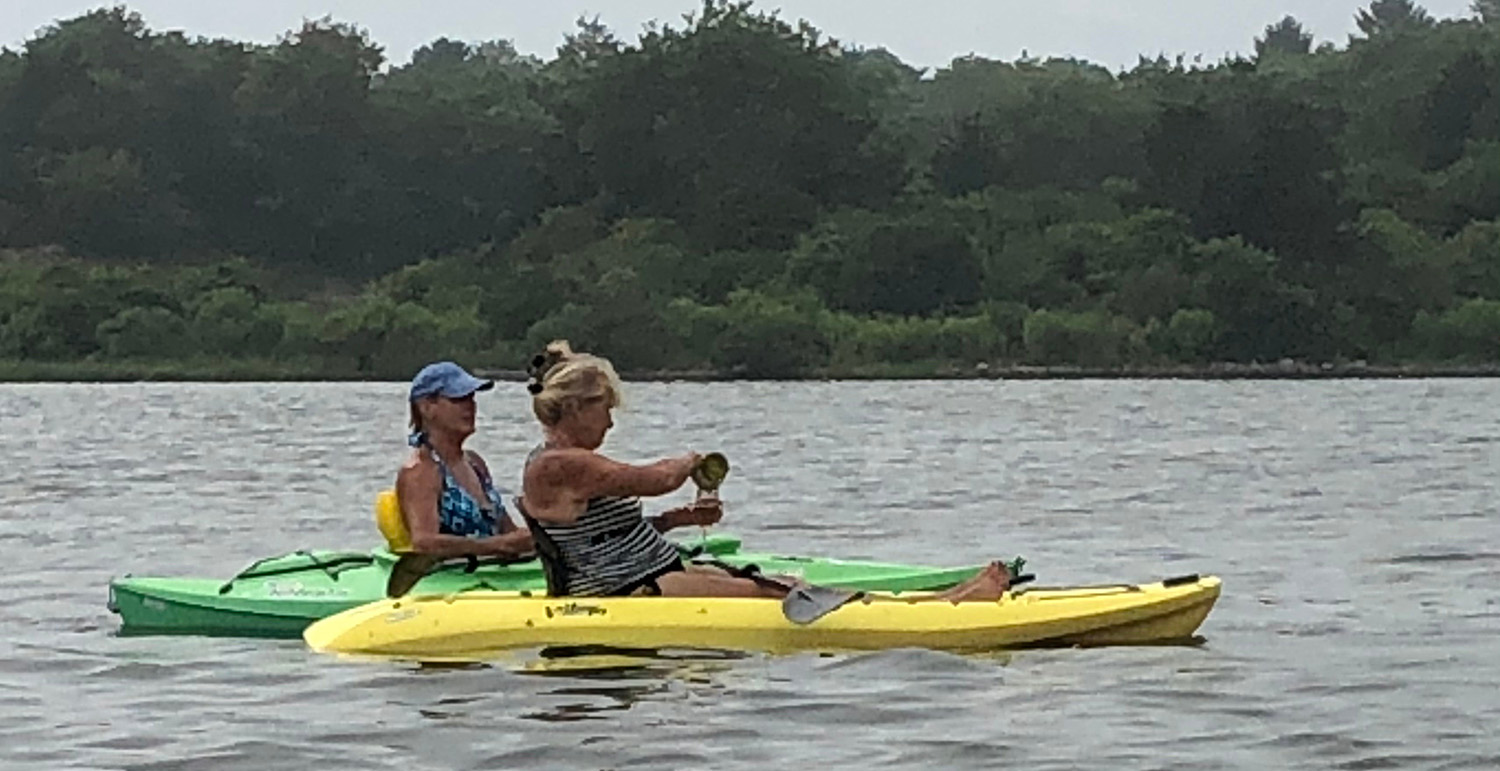 In sight of a “Don’t Give Up The Ship” banner, two young girls swam slowly in from the east. Bobbing in 85 degree water, they clapped in time to the rhythms, which is really pretty impressive. People all around swayed as a lovely dancer swirled and sashayed across an upper deck while David Latham, Potter Pond’s pied piper, stood below. He’s done a yeoman’s job trying to protect the pond and cove. He’s one of the reasons many people, several of them immediate abutters to the proposed lease site, were informed about the application and approval process already in motion. 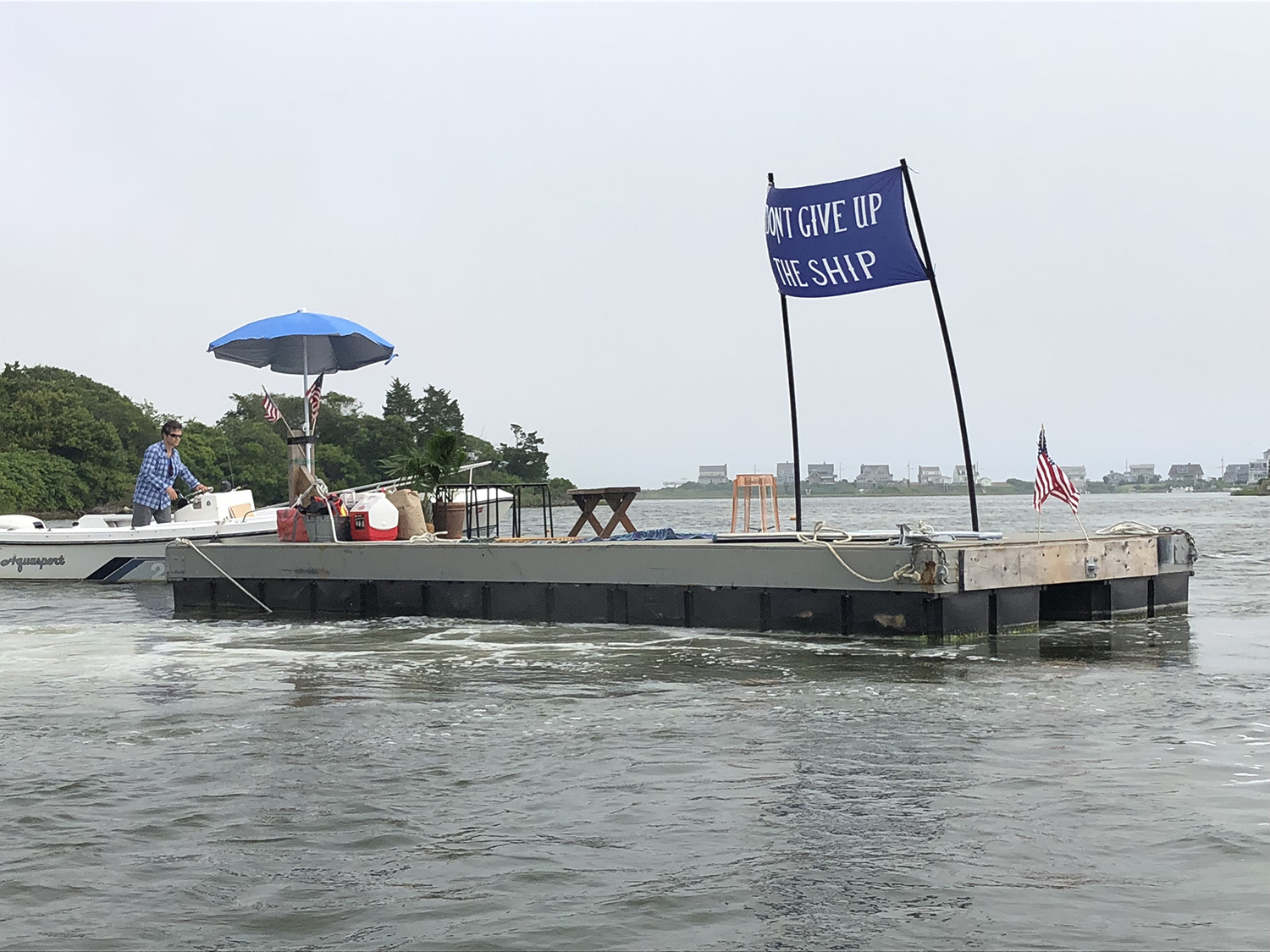 He brought people together to show support for all the historical uses of Potter Pond that should not be lost. It was a remarkable afternoon.

If a terrestrial business considered expanding, there’s plenty of forms with fees to process and likely some registered notice to abutters and neighbors. But in a local salt pond, where town land abuts state water, never the twain shall meet and neither shall the paperwork or announcements. I spoke with some shore-side owners who surely pay beyond dearly for their frontage yet aren’t allowed to scythe a narrow footpath to the water for digging some clams as that might harm our environment. With farming now, a business can move into so many people’s viewshed and celebrated environment, passing several agencies review and yet neighbors who may feel negatively affected for the life of that business or even more so if it is allowed to expand again, are never afforded any notice of the application unless they knew to request it from the state. That’s a problem.

Whatever your politics of dancing or farming, wherever you fall on the aquaculture expansion debate, it really was wonderful to see such a flotilla enjoying a local folk festival on a little salt pond on a perfect summer’s day.

“Lord the band kept us so busy, we forgot about the time,” wrote the poet Robert Hunter.

That’s pretty much exactly what so many don’t want to give up.

Change comes slowly to governments and often for good reason but perhaps it’s time to scythe a new path. Certainly there are several positives to growing bivalve mollusks: they filter water and provide a protein source. Shellfish can have magical social benefits. If aquaculture can enjoy momentum in sales and positive press bolstered by a five percent rule of accommodation, how about some of that energy gets transferred into developing a new line of communication?

If an application is submitted to lease our public land, how about all abutters within a certain distance get notified by the state and/or town? How about the state schedules a series of meetings to build a path to all those who may be impacted by an application, instead of relying on a list of those who knew to submit their email address.

It’s not too much to ask.

Potter Pond is a special place indeed but it’s not unlike many other pieces of water where people swim, fish, dig and ski.

In the words of Elton John and Bernie Taupin, “Well Daniel says it’s the best place that he’s ever seen.” 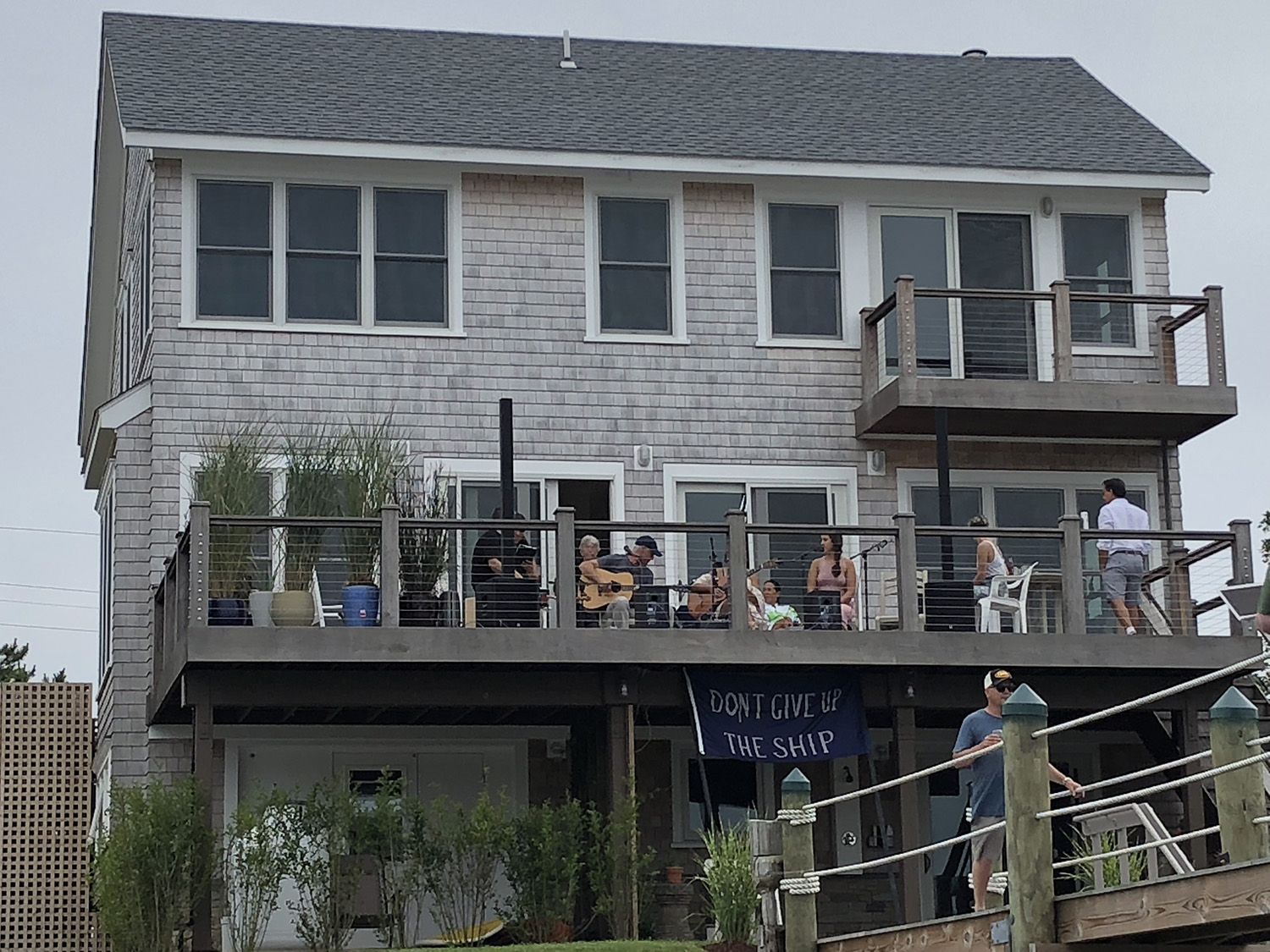 The party after the party, this time Barcelona played from the house deck