Captain Rob Taylor has issues and that's good for us 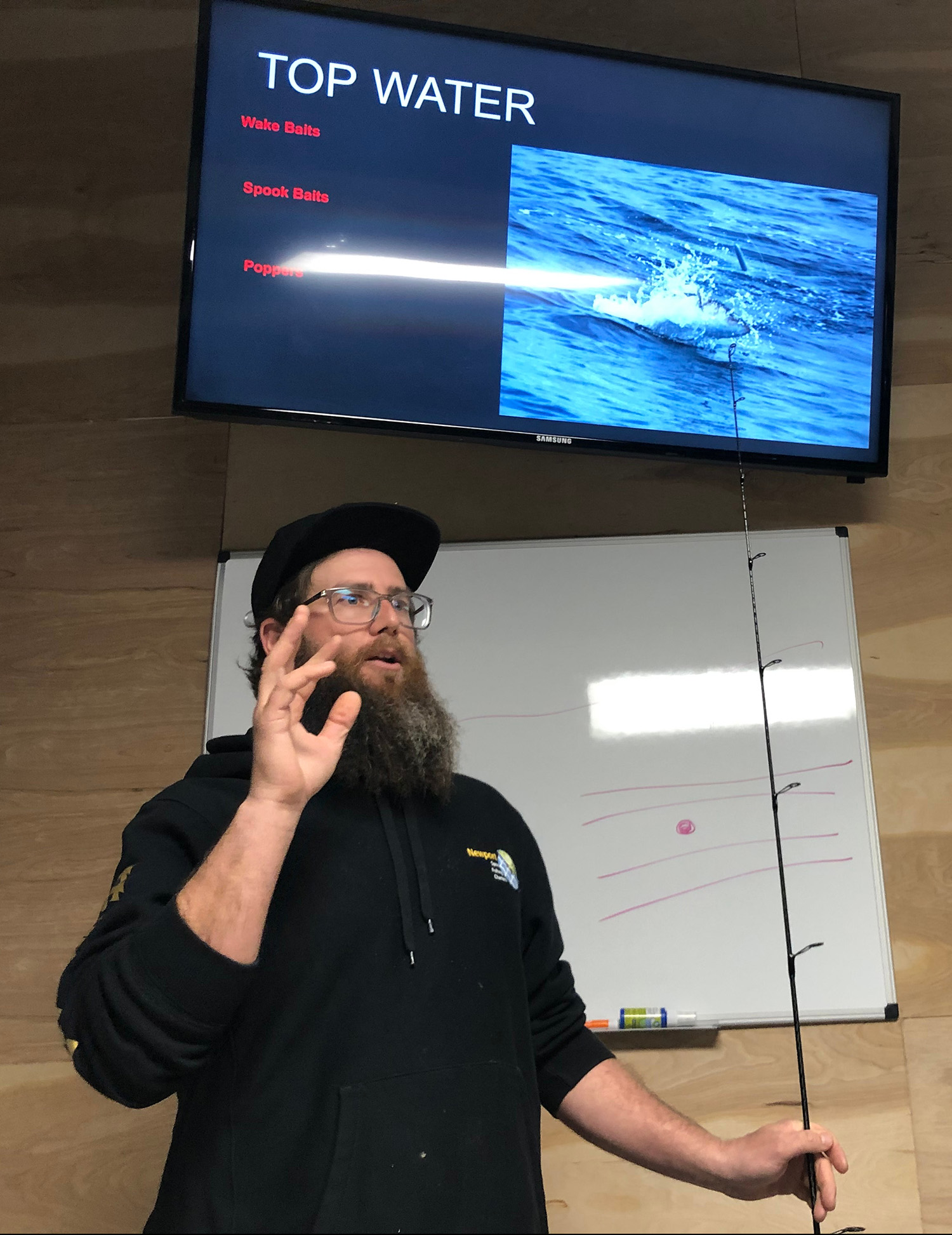 Captain Rob Taylor gets the class up to speed.

Rob Taylor has issues. As a charter boat captain and local striper fishing legend, he’s chosen a life path that’s knock down busy for months in a row followed by repairs, maintenance and planning for the next season of sports looking for big fish. So after back to back charters, which makes for a solid twelve or fourteen hour day, Rob hoofed it for a local pond in the dark, abandoned his truck and went fishing for largemouth bass. Why would someone do that? Rob Taylor of Newport Sportfishing Charters knows why.
“We’ve caught more fifty pounders…” was the perfect way to start a fishing conversation. Rob Taylor brought his insights, questions and hardy, deep winter beard to Ralph Craft’s Crafty One Customs, Rods, Reels & Tackle in Portsmouth for another of Ralph’s nighttime seminars. “My way is not the only way,” Rob said, but anyone in that room who really hoped to up their topwater game or even any part of their overall fishing strategy, knew that disclaimer was a veiled attempt to make sure they learned process and technique, not just what one captain preferred.  He spoke to a packed room about catching big striped bass on topwater gear while students cleaned off plates of Becky’s BBQ and cold cans of all varieties. As we mentioned a few weeks back, these nightly seminars are rare, real opportunities to sit with some real highliners, hear what they have to say then ask all the questions you want. 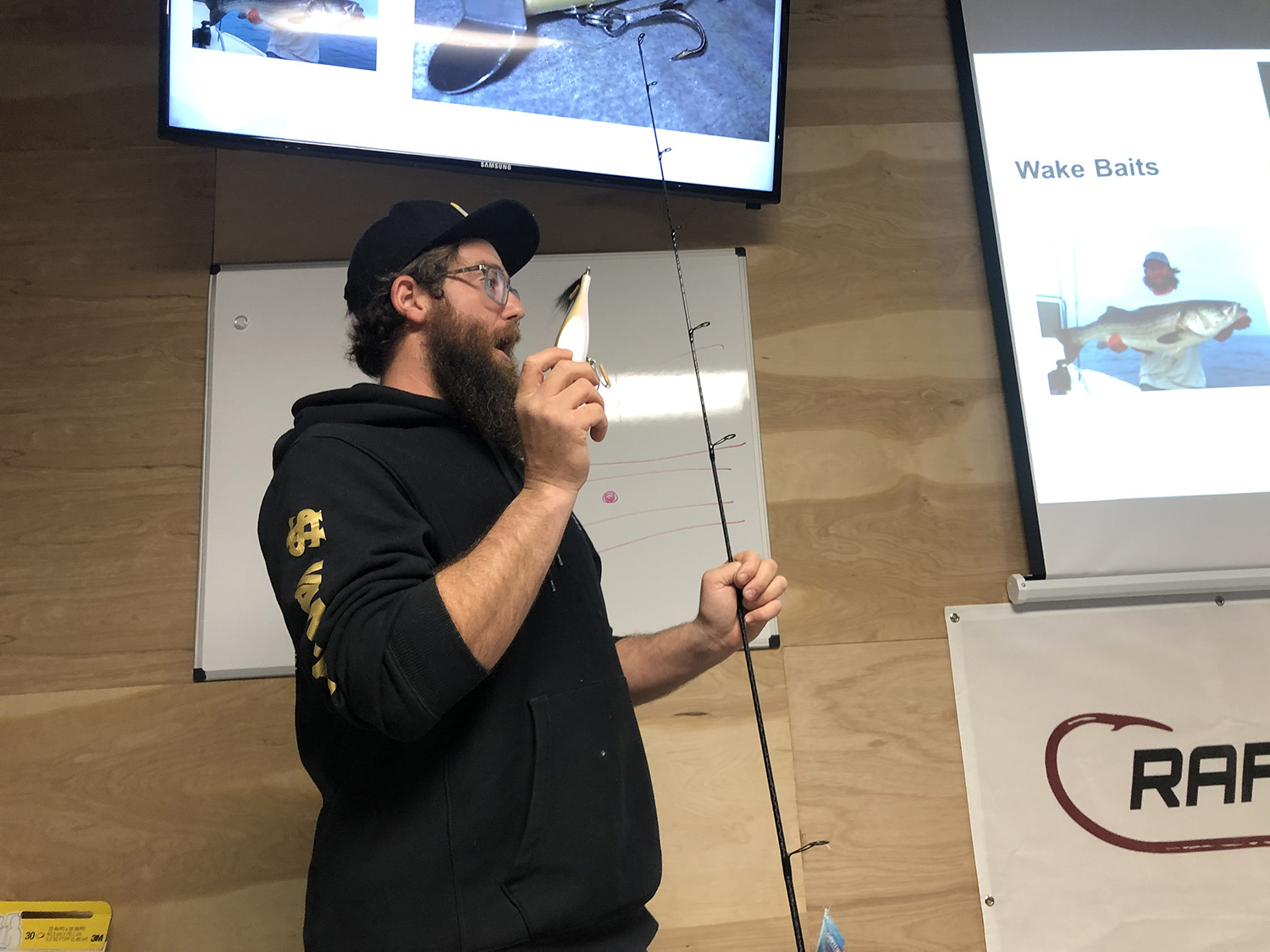 “It’s a fishing trip, don’t set unreal expectations,” he reminded the room. Rob was starting off clean, reminding the room that he pays attention to everything but Mother Nature is always in charge. Rob Taylor has a serious skill set which clearly starts with a gut level love of fishing. He started off fishing the surf and waded a few expeditions from Maine to North Carolina. With the relatively limited reach of a surf rod, he learned how to figure out where bass should be first and he caught a lot of fish.
Years back, Pat Heany ran a big longliner out of Block Island called the “Little One.” He was younger than everyone around him but he could out-fish all of them. He was a natural fisherman and captain. After ten or twelve days at sea, stocking swords, tuna and shark, even cod when we still had them, he would wash everything down and head for a pond in front of Cathy Szabo’s house and fish for largemouth bass until dark or until the cooler ran dry. Rob has that same look in his eye. It’s the reel deal. 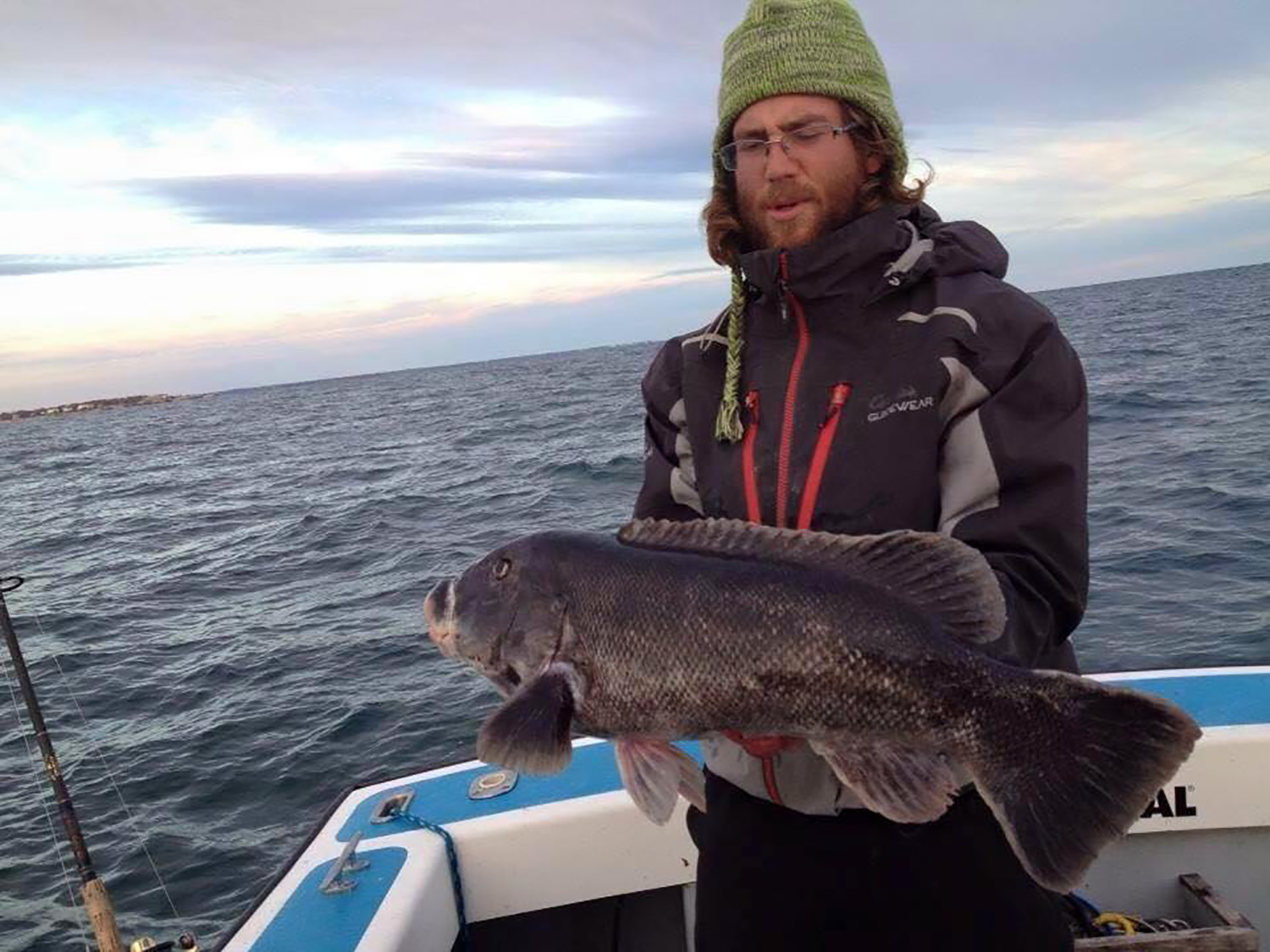 Captain Rob Taylor with a whipper of a tautog in a picture borrowed from his website, http://www.nsfcharters.com/

“Topwater fishing is all about covering water,” Rob said. He’s fortunate to fish from the top of Narragansett Bay to way south of Block Island, which no one should call “Block”, so when he steams for new water with anxious sports, he needs to observe everything to ensure success. One if his primary tools is avoiding terminal tackle whenever possible. He prefers 65 pound monofilament leaders. Mono is tough and doesn’t stretch, which is not always a good thing, in six to eight foot lengths. Fluorocarbon is more abrasion resistant and will stretch more than mono. To each her own. Losing metal weight keeps lines right and plugs swim as designed.
He’s not concerned with the color of his fifty pound braid; it’s more about the knots. If you’re going to give up snaps and swivels, you need to learn your knots. The loop knot is easy but the very popular FG knot, perfect for passing through guides without damaging them, takes some practice. Knots are more conceptual then practical sometimes; if you understand what you’re trying to do with the lines as opposed to trying to learn precise moves, you’ll get it. 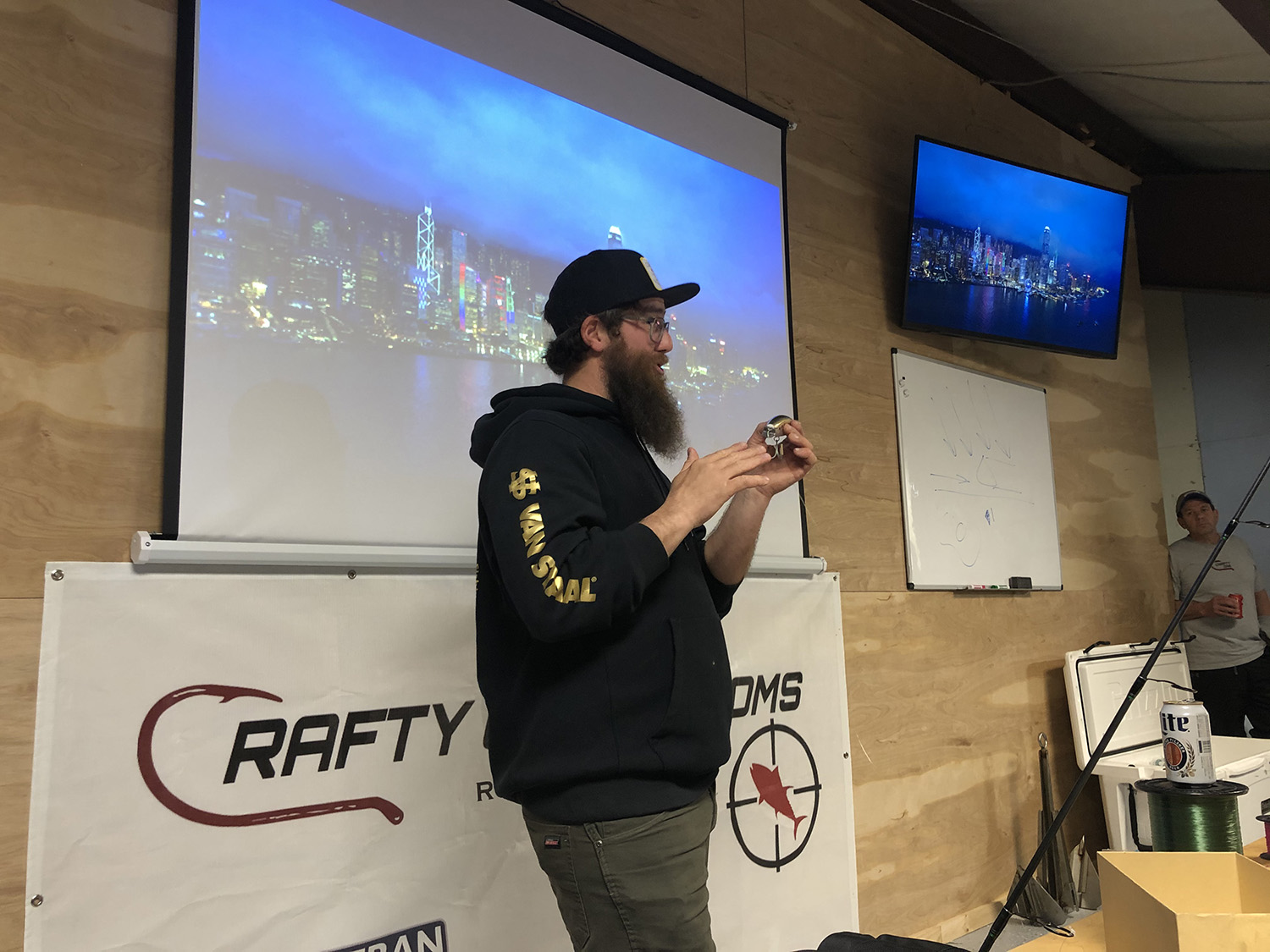 “I like poppers in big heavy surf,” Rob said, because they perform in extreme currents and can dive down just enough when currents are hard. He also spoke about longshore currents. Those of us who took oceanography 101 should remember the power of longshore drift, carrying water and sand along a beach front, filling in the pilings under the Ocean Mist, dragging sand off of Deep Hole and clearing out anything in Nature’s path. In situations where longshore currents are a factor, like where a southwest wind causes acceleration of currents along a beach, that’s a place to set up behind a boulder field, working the lee for big bass who stalk bait caught in the rush.
Rob’s fishing acumen far exceeds his art skills. Repeated attempts to draw rods, rocks and swim baits ended up a bit too phallic for Ralph and his mixed audience.   There was talk of fishing the Doc Lure, which has evolved into less of what it was and of applying scents to lures. The latter came with some objection from shop keeper Ralph who apparently stocked some smelly stuff but “pitched it out the window” after no one ever purchased any. Apparently now it’s all the rage on the low down. Ralph doesn’t have any and his loyal customers reminded him. “This is a boutique looking shop,” Ralph said, “with a locker room feel.” 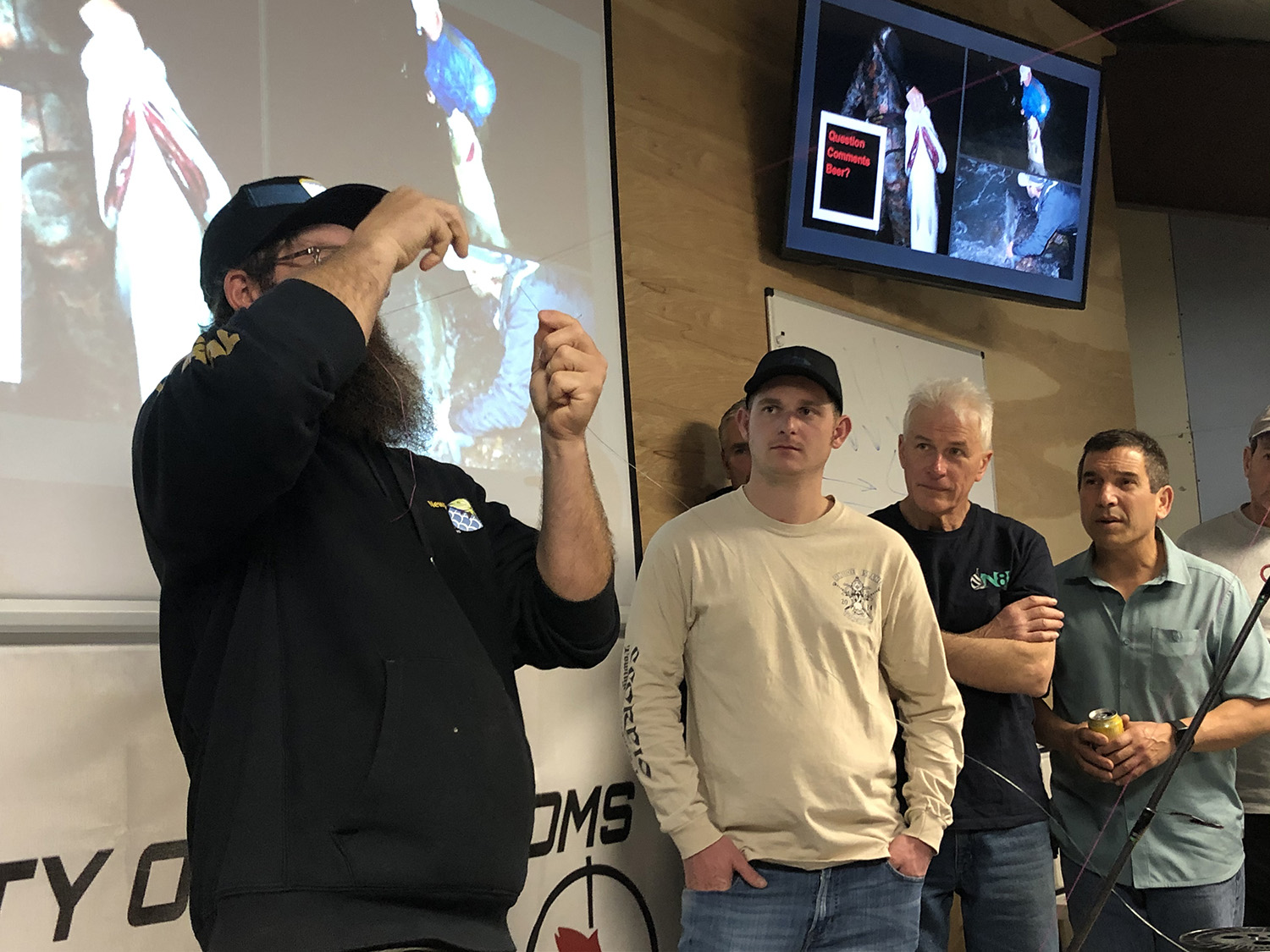 Rob Taylor said “we” when most would have said, “I”.
We noticed that.
That’s a sign of a good person who wants to take other good people fishing but when it’s lip flapping time on the dock, he’s already down the road with a Jigging World Nexus rod hanging out the window, looking for more fish.
“It’s the most fun you can have with your clothes on,” he said.
‘Nuff said.