The salt pond was unusually crowded with boats this past weekend. Not enough to require a “Knock It Off!” visit but far busier than expected. The physical and emotional lockdown we’re experiencing requires us to still have some outlet like hiking or fishing or even just shopping for something more fun than toilet paper. Dr. Fauci advises us to stay six feet apart which coincidentally might be the length of a fishing rod but if you don’t have a six foot fishing rod, is that a recommendation to buy a new six foot medium action rod, stout enough for trout, largemouth and schoolie stripers, to keep yourself safe? Just a thought.

Thankfully, trout fishing season, which RIDEM opened with a staggered system of days based on your last name, is now full on open. New Kayak Centre Fishing Team member Dustin Stevens christened the second opening day with a slew of trout, including one of those creepy golden ones and a giant rainbow. Another team member found himself some giant largemouth bass. “Possibly my biggest largemouth I’ve ever landed from my kayak!!” he said. So far. fishing in stocked waters has been as predictable as fishing in stocked waters can be.
See, there’s always hope.
The Atlantic White Shark Conservancy recommends we stay the length of at least one shark apart, which seems fair enough. The Conservancy has been offering delightful distractions with internet seminars and guest speakers helping kids and adults learn more about sharks.

John Dodd, Executive Director of the Atlantic Shark Institute, said they’re beginning a five year shark research study based right here in Rhode Island. Working with RIDEM, they’ll be using a total of ten acoustic receivers to learn more about sharks paying us some very local visits. “With seven receivers being deployed around Block Island, versus two in 2019, we will have a much better sense of what species of shark are visiting these waters and how often,” Dodd said. Two white sharks were detected last summer, so clearly there’s some interest in learning more. The Institute will also deploy six baited Remote Underwater Video Systems south of Block Island, which should never be called “Block.” These will allow researchers to identify shark species because according to Dodd, “The majority of sharks that visit our waters have not been tagged, as a result, getting video confirmation of all sharks, and their frequency, via these BRUVS, will be a valuable addition to what is already being learned from the acoustic receivers.” Sleep tight, swimmers. 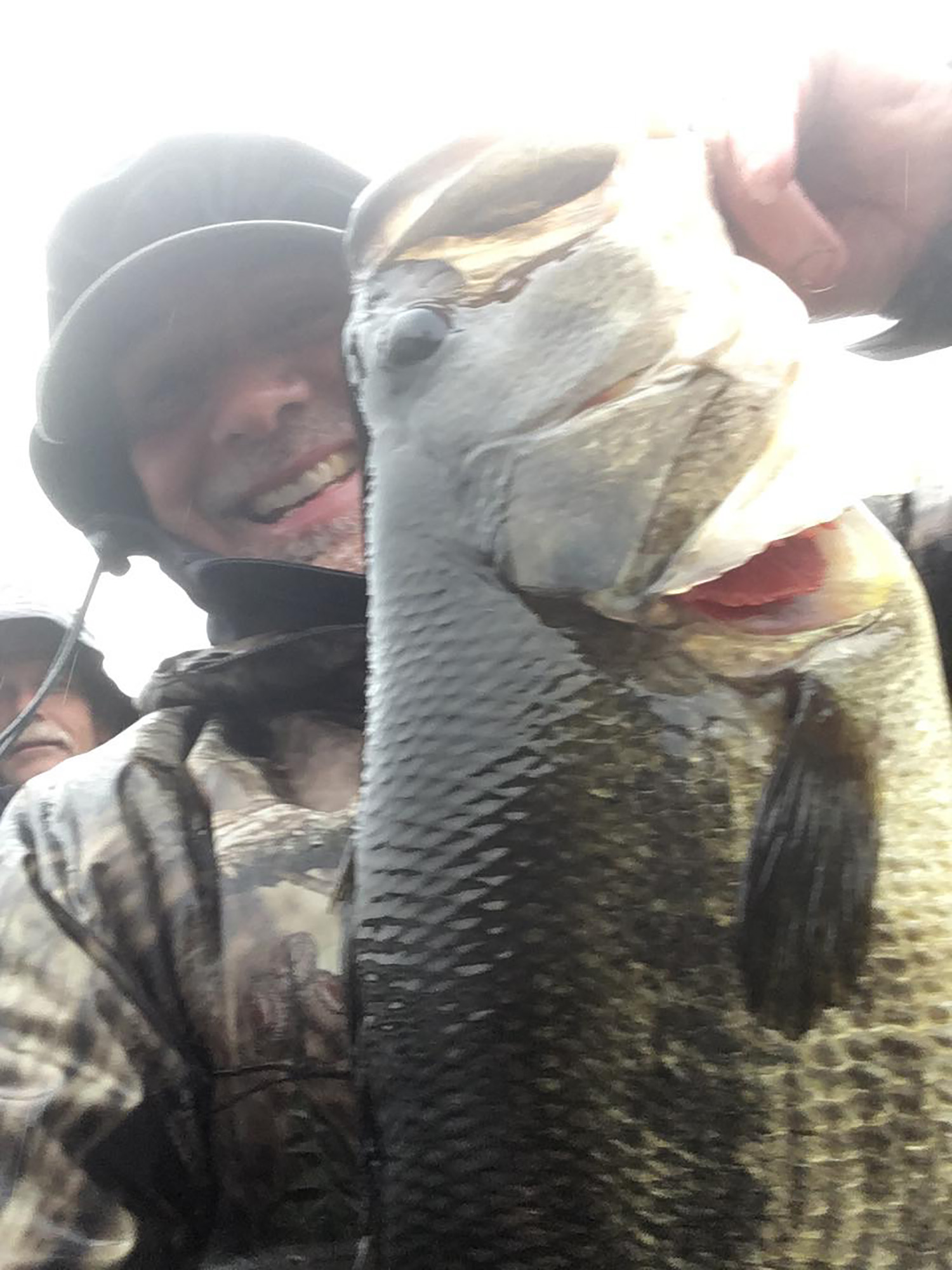 Bob Buscher, the very same who achieved fame last year for catching and releasing one thousand pounds of largemouth bass, hasn’t let anything keep him from catching more and more, despite the wind. And rain. And more of both. Bob’s brother reported, “Many schoolies and an occasional sturgeon in the Hudson around Croton Point Park” where water temps are already 50 degrees. Ian Clark landed likely the season’s first lice covered striped bass with small Berkley Swim Shads off Narragansett and anglers have been wailing the west wall with barbs pinched back, since then.  Larger fish are arriving daily, likely the only out of state residents we’re excited to see these days.
Jason Anctil, who shines being, “One bite away,” keeps plugging away with lipless and square-billed diving crankbaits for big largemouth. In his typical reserved style, Jason said, “They have been chewing!”  You don’t need to be a detective to know you should be following that cat around to find the big fish.

Then there’s South Kingstown’s Aaron Flynn. Just to be safe, Aaron kept his distance from any yard work and pulled in a few big largemouths after the day job. Big swimbaits seem to be catching well right now as well. If Howard Reed of Narrow River Customs can catch white perch on a big, splashing Danny in ten feet of water, you can catch a five pound largemouth on a three ounce swimbait right now. 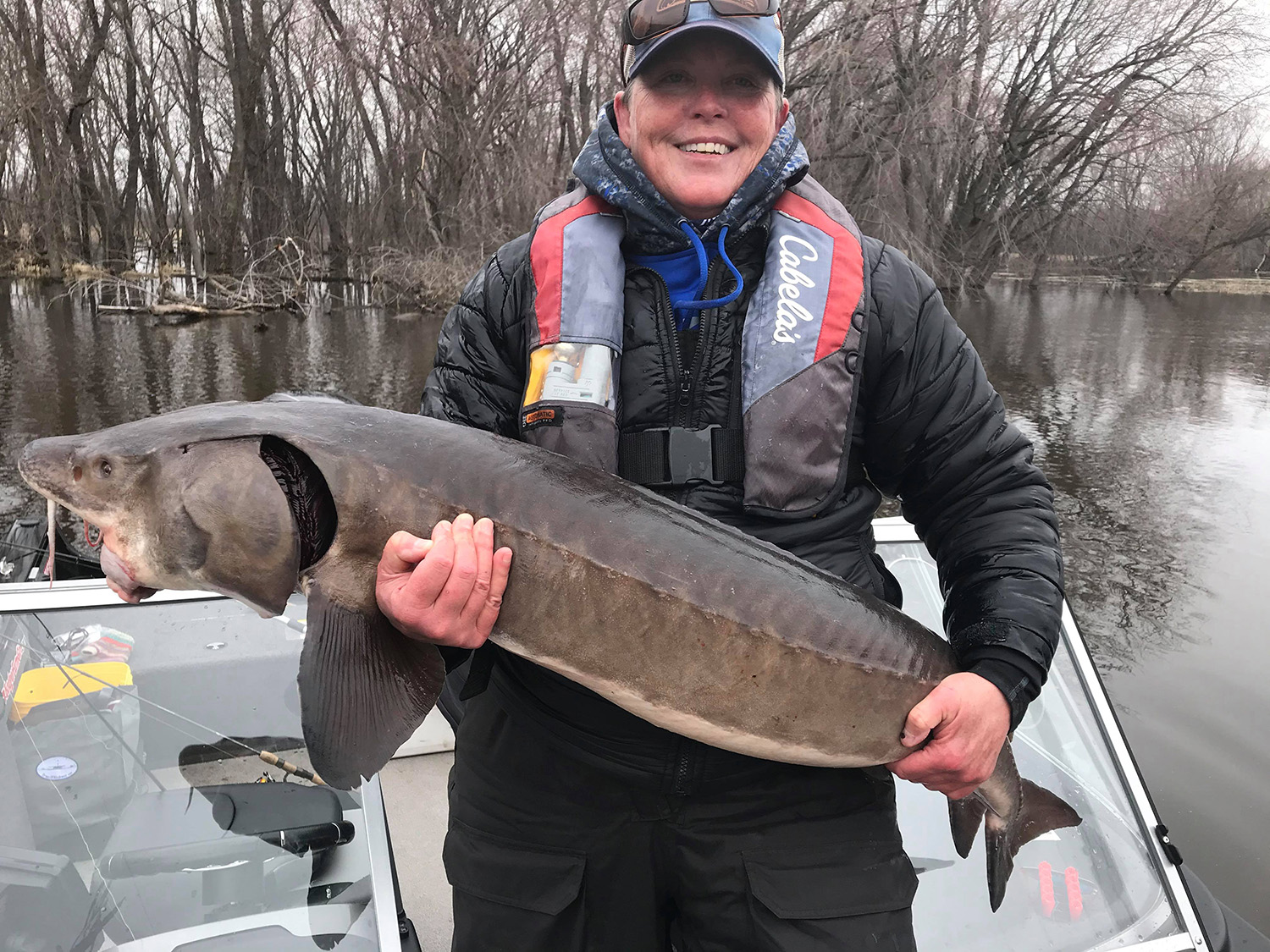 Barb Carey and a whipper of a sturgeon

A little to our west, Barb Carey has been reducing the distance between her boat and all sorts of fish. Barb is the founder of WI Women Fish (WI being Wisconsin, of course) and the Woman Ice Angler Project. Beyond that, her fishing resume is too long to list here. She landed a sturgeon this week as big as a kayak and a few walleye bigger than any stripers we’re catching around here. Barb has family on the east coast and said, “I was supposed to go out there to see my daughter and fish for stripers. No travel so I am stuck fishing close to home. Good thing the walleyes are running.” Always positive and always fishing, that’s Barb Carey, even in such strange times. Could a fisherwoman have a cooler name than Barb?
Her friend Angie Scott lives in Nashville and runs The Woman Angler and Adventurer podcast. Lockdown there isn’t much different there and Angie has been fishing as much as she can. She said, “Yeah I’m on the water & catching fish! Bass and crappie are on fire here right now. My biggest piece of advice for people is to get out and fish but carefully follow the social distancing guidelines to stay safe and help protect the privilege for all. A few states have had to shut things down because others weren’t following the recommendations.” True, True.

Cheers to all of you getting your outdoors fix while practicing social distancing with your new six foot rods. We’ll get through this soon enough and Nature will be waiting.