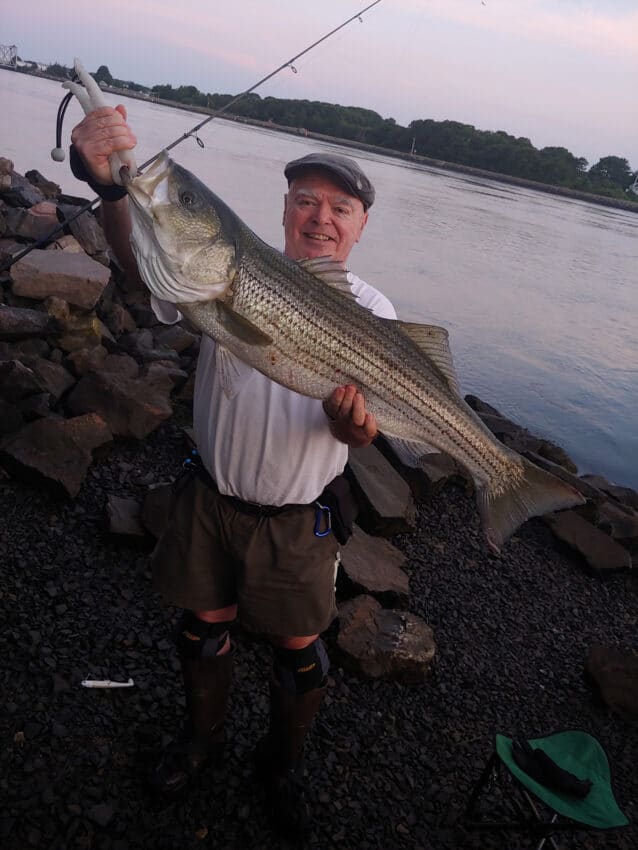 This week it’s all good news. We need more of that.

“You’re only one bite away,” says the ever-hopeful Jason Anctil, typically just after he’s hauled in and released another big fish of any variety of species.

Nick Schmaruk and RI Rock and Roll Hall of Famer Mike Yarworth just reported meandering our south shore for a daytime surfcasting safari from Scarborough Beach, properly pronounced without the need of consonants, to the Point Judith Lighthouse then west to the breachways then back east to Matunuck.

The coincidence that beer is served near the last fished beach stands clearly as no coincidence.

You’re only one sip away.

Nonetheless, the two found plenty of striped bass hitting Cocohoe Minnows all over sandy and rocky stretches. One of the beauties of such a simple lure, which is offered with sincere admiration, is that it so wonderfully mimics natural baitfish, and even with a bag full of available lures, Cocohoe’s just plain catch fish. The duo landed an estimated one hundred fish from tinker to keeper sized so the message here is: while seawater temperatures hold, now’s the time to put down the Nintendo and get a last few days and nights in the surf.

Moving farther north, if you’ve ever white-knuckled your way east on Route 93 then onto Route Three then onto Route 53, you just may have raced past a pretty piece of slow water that has been damned into submission for three hundred plus years. Third Herring Brook winds through old cattails and colonial-era sediments, struggling to keep moving through ancient and irrelevant dams, artificial impoundments, and algae-choked fake ponds as it winds its way past the now old Hanover Mall then to points south when she receives Wildcat Brook before blending with the storied North River. SUMCO Eco Contracting has done an amazing job removing the old Peterson Pond dam and is just about done restoring the natural path which is amazing on several levels. The struggle to remove the old and replace with what is supposed to naturally mimic the real old often is a Sisyphus level job but with backing from the right people and vision from old school river keepers like Warren Winders and Geoffrey Day, they are making it happen right there on the side of the road. In the midst of so much national turmoil, Third Herring Brook has been relieved of three dams impeding her flow and timeless fish passage. Point is, if you’re up there, pull over near the mall and recharge. The Holidays are coming; we’re all going to need a few secret Zen places. More on Third Herring Brook’s partial freedom soon.

East End Eddie teaching us to fish for Canal stripers

Admittedly, winter is setting in and no one likes seeing aisles of Christmas everything at Job Lot before Thanksgiving but we’re dealing with pandemic frustration. So more than ever, we need to refresh our psyche’s with new strategies for spring fishing and East End Eddie is the man to help us.

Eddie Doherty spoke to the RI Saltwater Anglers Association, via ZOOM of course, on November 30th. Eddie is a top-tier fisherman who has spent years strategizing and executing his plans to find the biggest striped bass on The Cape. Consider that Eddie first fished the canal with his grandfather more than fifty years ago and, speaking from first-hand knowledge, Eddie has the gift of both great fishing skill and communication (I highly recommend his book.)

A must have book by Eddie himself

I’ve had the pleasure of hanging with Eddie a few times, hearing his stories and taking notes. This RISAA meeting was a night of pure opportunity for those who fish the canal or those who still have it on their bucket lists. That, of course, means if you’re not a RISAA member, that was the perfect time to join and enjoy one of the best benefits. In-person RISAA meetings were real hubs of raffle ticket drawings, chit-chatting, and story stretching and even in a new temporary virtual world, we need those connections more than ever. Join RISAA by clicking this link so you too can be in the loop.

For now, RISAA meetings might mean you’re hanging in your best camo sweatpants while hanging off the end of your recliner hearing about forty-pound striped bass pulled from slippery rocks but soon, God willing, we’ll be back at the Elk’s Lodge, hoping to win a charter trip with Captains Jerry Sparks, Dave Monti or Rene Letourneau, eating buffet-style dinners and shaking hands. Until then, listening to East End Eddie Doherty tell us all how to find, hook, land and release some of the biggest striped bass of our lives is enough reason to join RISAA.